By AJ Kumar
May 14, 2012
Opinions expressed by Entrepreneur contributors are their own. 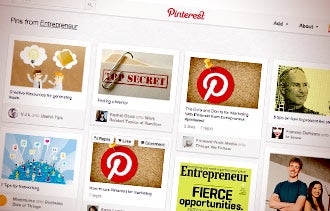 You signed up for Pinterest, the popular online bulletin board, thinking it'll be the next great social networking platform for your business. You've already pinned a few pictures that relate to your company. But now what?

Here are a few guidelines to follow to help promote sharing:

Related: The Do's and Don'ts for Marketing With Pinterest

Embed sharing options in your content.
In addition to creating viral-worthy content, you'll want to build social sharing options into the Pinterest-ready posts on your site. If you run a WordPress site, the ShareThis and Digg plugins offer automated solutions that will add "Pin It" buttons to every post on your site.

If you run a static HTML site or prefer not to use one of those plugins, check out the Pinterest "Goodies" page for details on how to manually install Pinterest sharing buttons on your site and within your content.

You also can add Pinterest sharing prompts to messages you send to your email marketing list, to your forum signature or on your other social networking profiles. Make your calls to action as relevant as possible to the specific group you're targeting and people will likely share your content on Pinterest.

Be active on Pinterest.
While the first three tips covered specific actions to take on your website to encourage sharing, it's just as important to maintain an active presence on Pinterest itself.

That doesn't mean barging in to deliver promotional content on your own Pinterest board. Such intrusiveness probably won't be appreciated and can lower your chances of having your content shared.

Related: Three Tips for Drawing Even More Traffic from Pinterest

Instead, become a regular participant. Check in at least once a day, create pin boards that aren't promotional in nature and re-pin content from other users that you admire. If you engage with the community in a low-key, natural way, you can increase your credibility as a Pinterest user. That, in turn, should increase the likelihood that your content will be shared.

By spending time on Pinterest, you also can pick up on trends within the community that you may be able to capitalize on. As an example, earlier this year, the "What People Think I Do / What I Really Do" meme gained traction on popular social networking sites including Pinterest.

As an active member on the site, you could have picked up on this trend and released your own industry-specific graphic.

Essentially, sharing networks represent a "you scratch my back, I'll scratch yours" type of partnership. In these arrangements, you team up with other users to re-pin each other's content and jumpstart viral sharing on the network.

Related: What Magazines Can Teach You About Using Pinterest

Of course, there are a few things to keep in mind with this approach. First, try connecting with potential sharing partners who aren't your direct competitors. Your rivals could siphon off some of the traffic.

Also, monitor the effectiveness of this approach. If you don't see an increase in sharing and re-pinning of your Pinterest content, end your partnership so you can focus on other approaches.

4 Self-Sabotaging Beliefs That Hold Women Entrepreneurs Back from Success