Colleen DeBaise
November 30, 2012 min read
Opinions expressed by Entrepreneur contributors are their own.

Editor's Note: We're rolling out 10 Days of Indie Merchant Gifts, in our annual celebration of the artists, craftspeople, designers and other independent merchants who make one-of-a-kind products. See gifts in the categories of pets, jewelry, kids and quirky.

It's a tough job, but someone's got to do it.

A day before Thanksgiving, a team of editors at Entrepreneur.com's New York offices tasted and drank our way through the food and beverage items we received in response to our call for Indie Merchant Holiday Gift Guide submissions. We discovered (no surprise) that we're suckers for cheese and chocolate. More unexpected? Our taste buds were overjoyed by cabbage, turmeric-tinted peanut butter and dried beef. Here, we share our top picks for delicious items made by independent merchants, all priced under $50.

And please note: This is the only category with a three-way tie for Editors' Pick. We simply couldn't narrow it down! 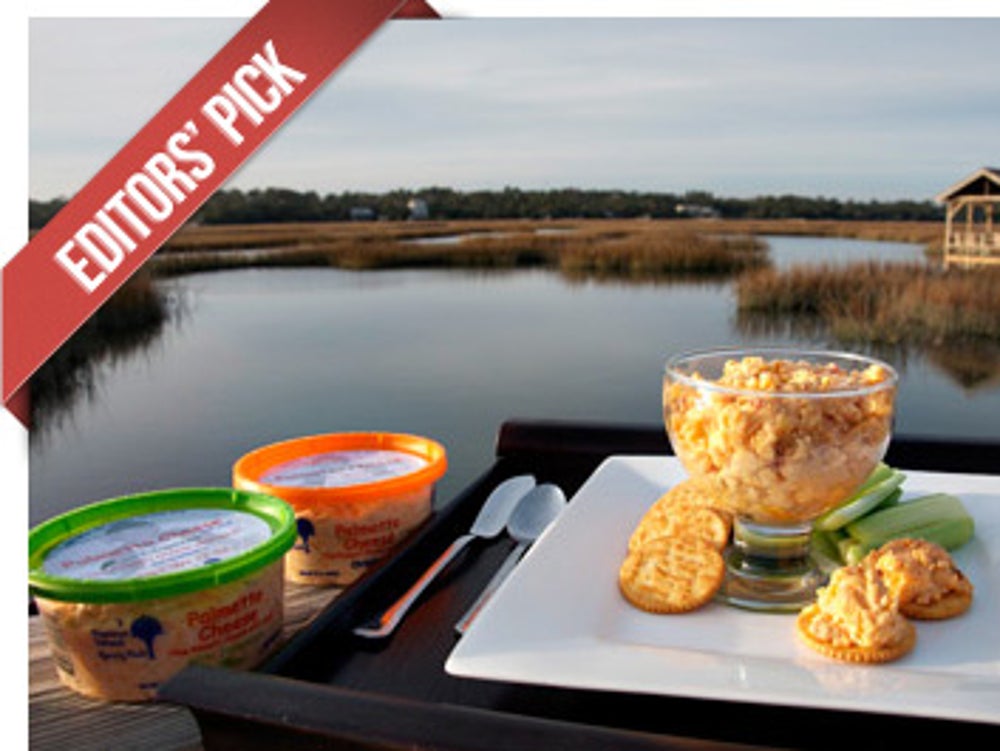 "Making pimento cheese is something that I’m passionate about," says Sassy Henry of Pawleys Island, S.C. "It's one of those kitchen staples that has family tradition mixed in with the grated sharp cheddar." She started making her version for Atlanta Braves tailgate parties, eventually honing her recipe and adding it to the menu at Sea View Inn, the seaside inn she owns with her husband, Brian, in Pawleys Island. With encouragement from friends and patrons, she now sells three varieties -- original, bacon and jalapeno. "There’s no greater compliment than when customers tell us, 'Your pimento cheese tastes better than my mother’s, but don’t tell her I said that,' " she says.

Editors' comment: We loved this cheese, and for many of us Yankees, it was our first time tasting this traditional Southern food. Rich in body, creamy but not too heavy. . . in a word, yum. With a festive bow on top, it would make a particularly lovely gift for a host or hostess.

After losing her job in the economic downturn, Lauryn Chun of New York began selling kimchi -- raw, fermented spicy pickled cabbage, which is a staple in Korea -- based on a recipe from her mom's 23-year-old restaurant Jang Mo Jip (“Mother-in-Law’s House”) in Garden Grove, Calif. "I often relay the story about kimchi to my customers that in the Korean tradition, kimchi is eaten with every meal, as a healthy, delicious way to add naturally occurring probiotics, which we all should be eating more of," she says. This DIY Kimchi Kit "is a unique holiday gift for the foodie who wants to try making kimchi at home but is intimidated," she says.

Editors' comment: Delicious! We tried this at home, using the kit's seasonings and easy instructions, and whipped up a flavorful batch of kimchi. We agree -- this is a gift a foodie would love. 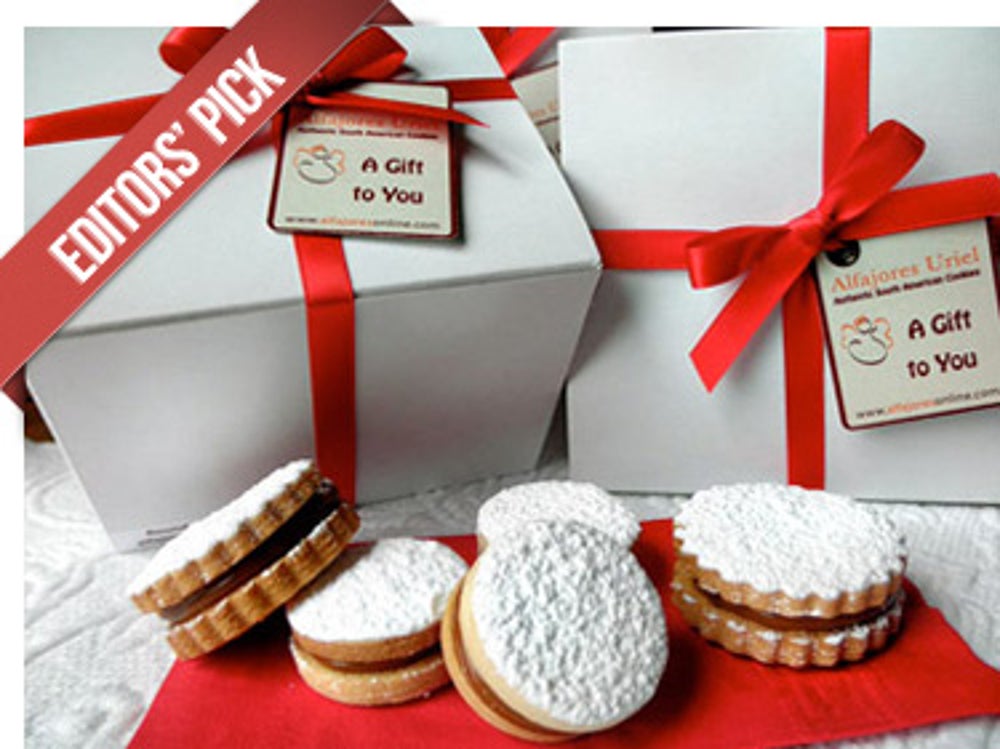 Ana Rijo of Bronx, N.Y., was born and raised in South America. "I grew up loving the Andes, its people, its music and its traditions," she says. In the U.S., she missed the alfajor-- a sandwich cookie filled with dulce de leche that is embedded in South American culture and "a synonym of family and friendship, of gatherings and good times." She says she began making and selling alfojores to "share the love of our culture." Each alfajor is individually wrapped to maintain freshness, and each gift box (filled with one dozen) is packed with "love and care," she says, "as if you would have wrapped it and sent it yourself."

Editors' comment: We called in an expert -- an editor's Argentina-born mom -- who tried these and pronounced them deliciously authentic. The tissue-filled box, with its festive bow, also makes this a special gift. 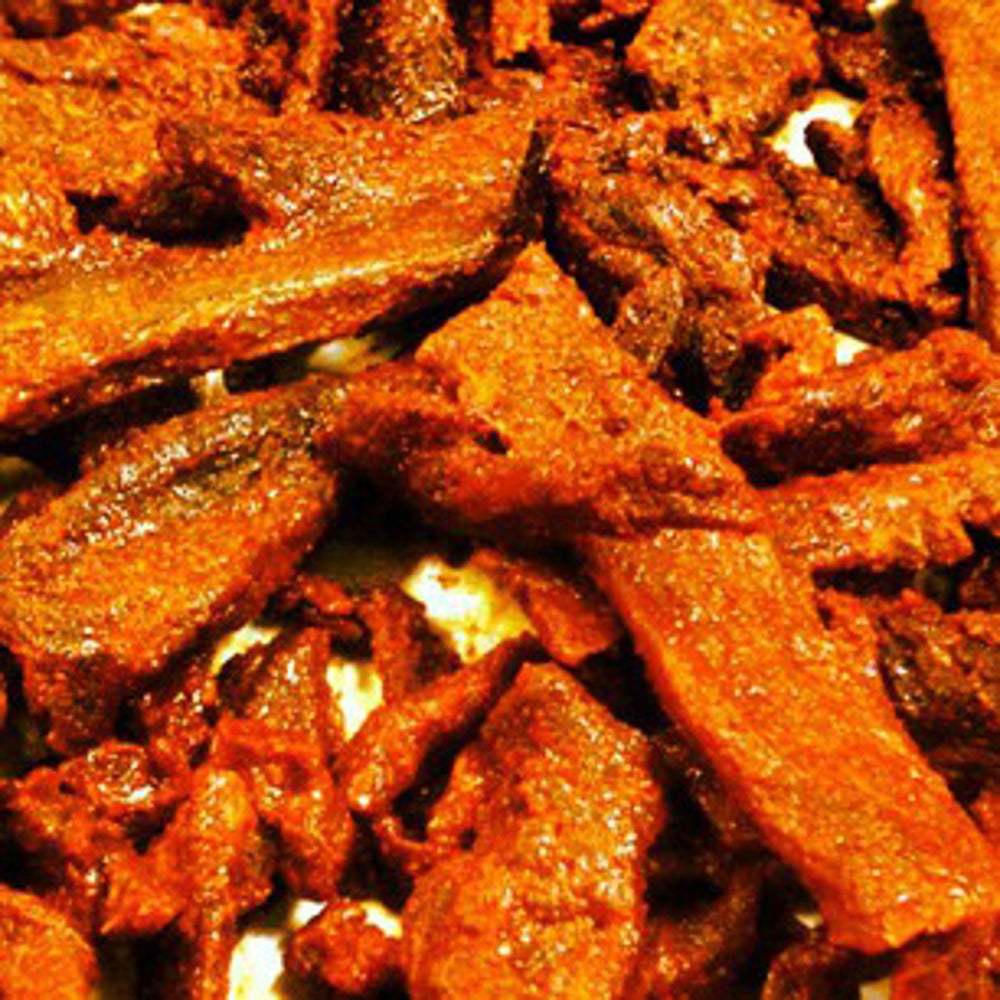 The team at Catullo Prime Meats in Youngstown, Ohio, know a thing or two about homemade beef jerky. They've been making it for 28 years. This variety pack of 10 (2 oz.) bags is the perfect gift for the "jerky connoisseur," says manager Chad Davis, who adds that they have "perfected" the recipes. "There is no better way to say happy holidays then giving some good-old beef jerky," he says.

Editors' comment: The men in the office were particularly partial to the jerky variety pack, which they pronounced "flavorful," "tender" and "not at all like cardboard" -- even if the spicy habanero option "jerked" a few of them around. This would be a fun stocking stuffer for meat lovers. 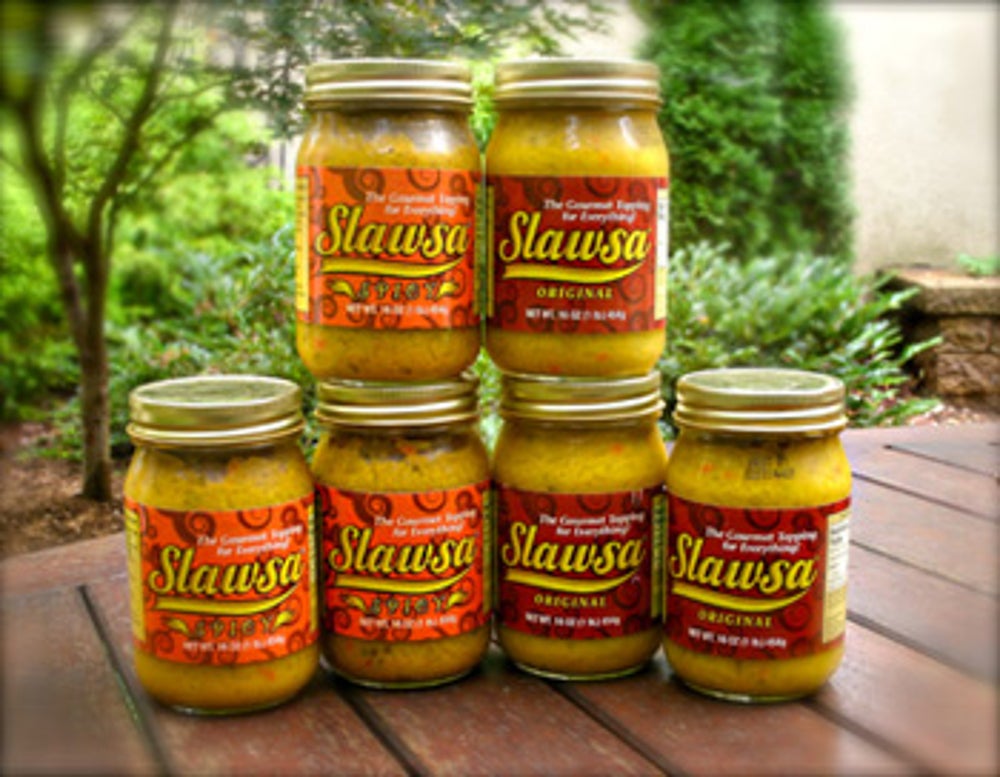 Judson Odom, an electrician from Chattanooga, Tenn., has been whipping up this "topper" -- a decades-old recipe from his late mother -- since 1998. It's a cross between "slaw" and "salsa" and simply "revolutionary," says Julie Busha, co-owner of its maker, Nicole Foods. Now sold in grocery stores, restaurants and a few stadiums, Slawsa is fat-free, cholesterol-free, gluten-free and the "ultimate topper" for hot dogs, brats and burgers, she says. It can also be used as a dip for tortilla chips. "We’re here to change your mind as to what a “relish” could be," Busha says.

Editors' comment: We admit it: Skepticism reigned when we first saw this jar of chartreuse slaw. Then, we tasted. Heaven, anyone? We especially liked the slaw when smeared on celery sticks. 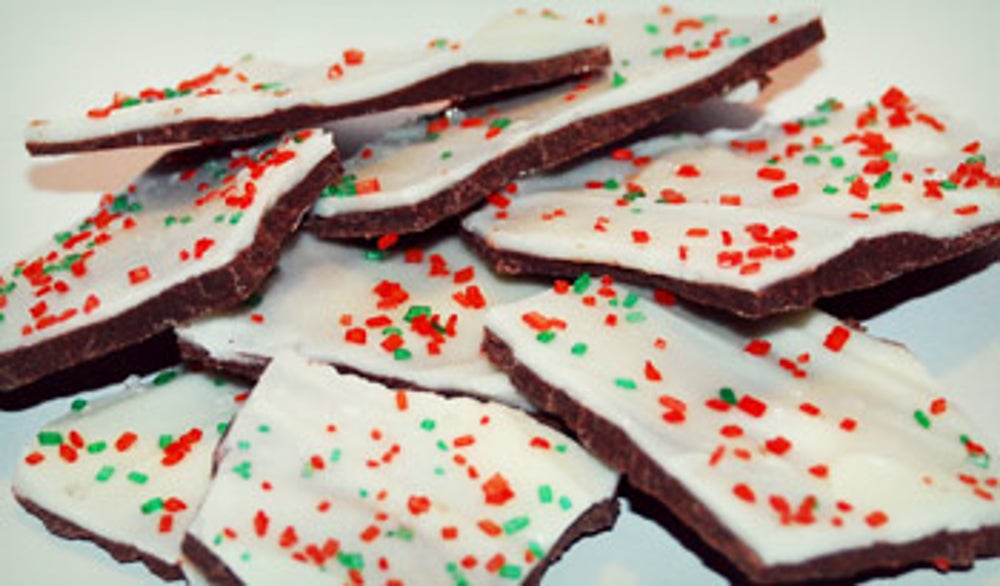 Daniel Ensanian of Long Island, N.Y., and his sister, Lisa, started Jojo's Chocolate Hope in August, after their mom, known as Jojo, passed away from lung and pancreatic cancers. Their start-up company donates a portion of its profits to cancer hospitals and research centers. The chocolate bark is inspired by a recipe their mom used to make at the holidays. Their goal is to provide "a little bit of faith and happiness to families also going through a difficult time," he says. Also, by starting a company together, the siblings hope "to fulfill her dying wish of making sure the family stuck together without her."

Editors' comment: If you're not already sobbing at the story, you'll cry when you taste this chocolate -- it melts in your mouth. And with its red and green sprinkles, the Christmas bark makes a festive gift.

"On Aug. 12,1962, Guy Parker's BBQ Restaurant became Goldsboro, N.C.'s first integrated establishment for both blacks and whites," says John Parker, who's now running the company since his dad Guy's death from lung cancer a few years ago. The family continues to make this BBQ sauce and marinade, which is sold in local stores and Whole Foods.

Editors' comment: We tried this with chicken, and found it appealingly spicy. Our shipment came with a host of recipes, including ones for salad dressing and a Bloody Mary, which shows versatility, too. 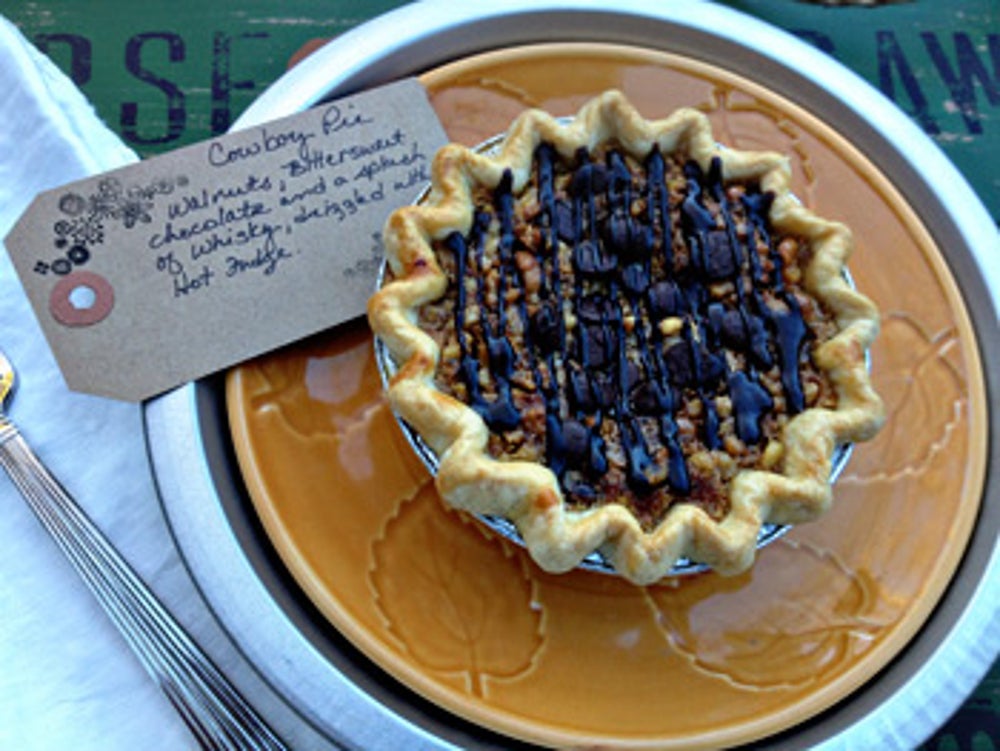 "My sister and I have been baking since we were old enough to sit on our Grandma's counter," says Michelle Adams of Geneva, Ill. Growing up in a big Italian family, the sisters learned early on that "sharing a meal with family and friends after a busy day was a way to slow down and enjoy life." A few years ago, unfulfilled by their professional careers, the sisters began selling their baked goods at farmers markets and are now opening a storefront. Their Cowboy Pie is made with walnuts, European bittersweet chocolate and a splash of locally sourced whiskey. "The pie reminds us of picking black walnuts with our father on a crisp Autumn day," she says.

Editors' comment: We sampled the mini version of this pie, which was so decadent it left us wanting more. Delish! 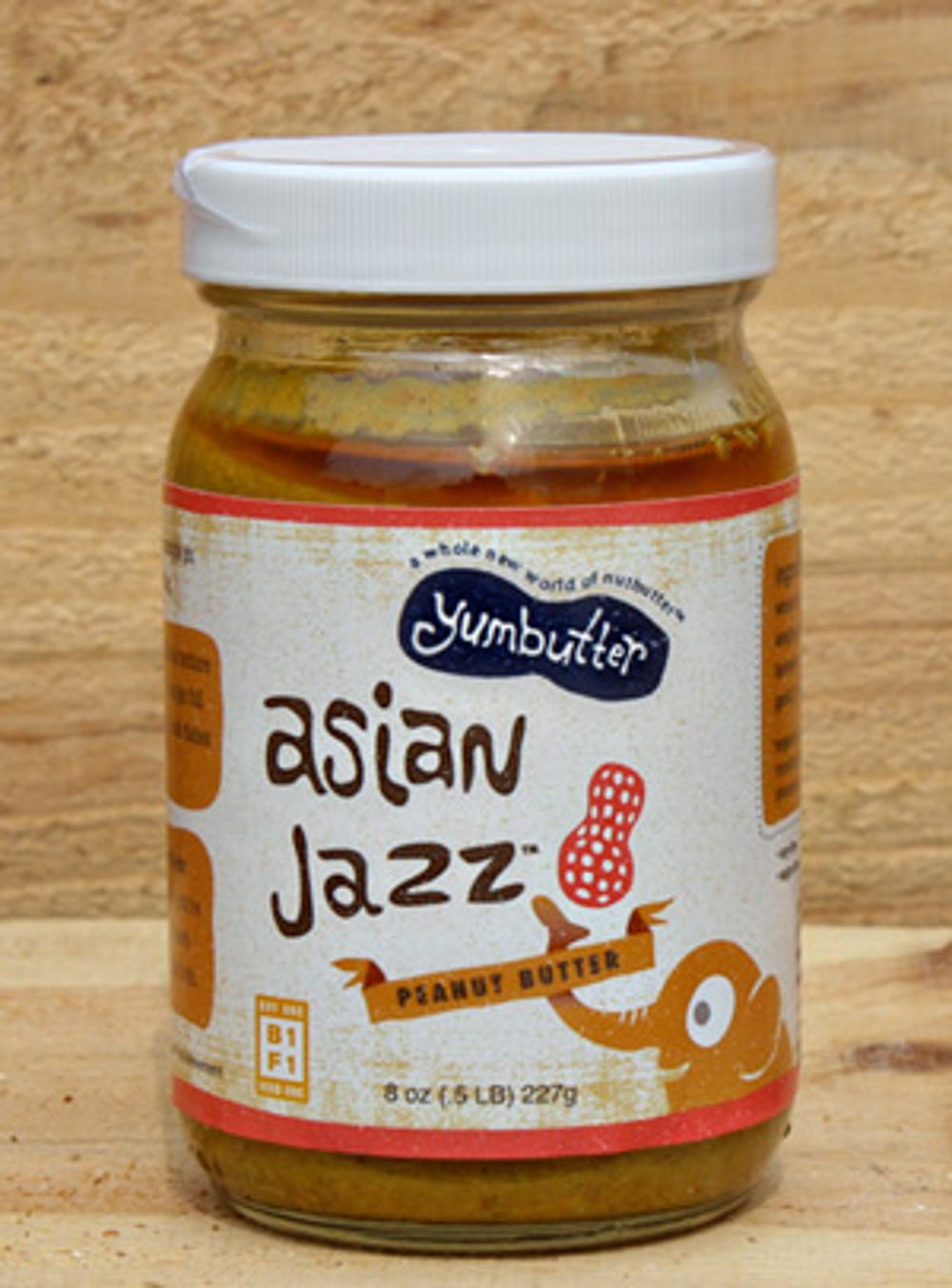 "As an athlete and adventurer, I spent most of my life shoveling peanut butter into my mouth to sustain my running, jumping, climbing, and flying," says Adrian Reif, who begin making a homemade PB concoction in 2007. He says he didn't perfect the recipe until a few years later, when he was trekking Mount Everest in Nepal and doused his peanut butter with a mix of Asian spices. "The revolutionary, mouth-watering combo fueled me to base camp and back," he says. Now back in Madison, Wis., he's set up a socially concious business company where customers help feed a kid in need every time they buy a jar.

Editors' comment: We dipped green apple slices into a jar and found it a gooey delight. "Is it wrong that I want more of this?" one editor asked. 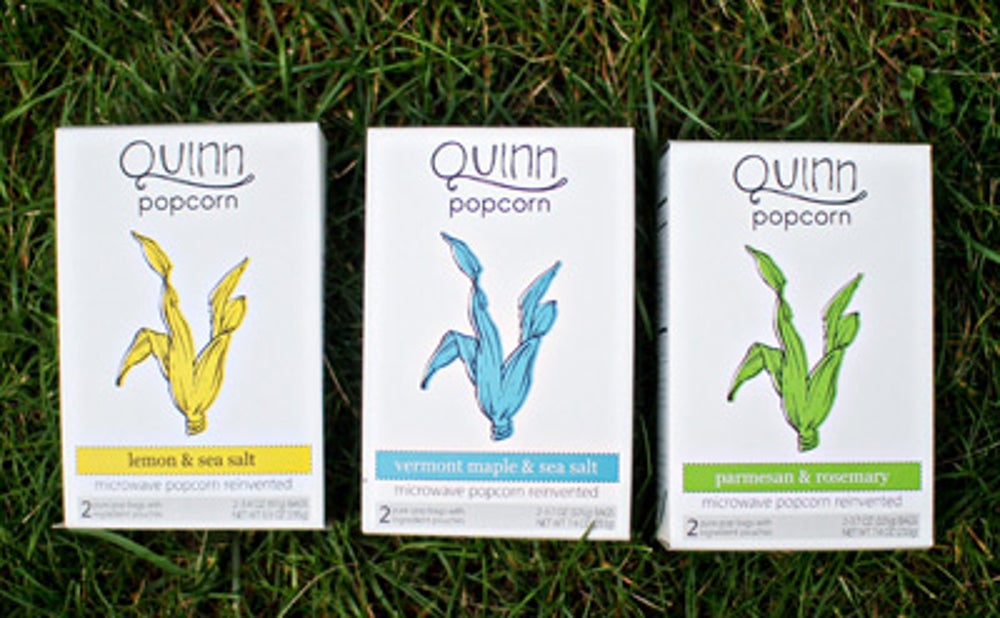 Coulter Lewis says he and his wife Kristy set out two years ago to "clean up" microwave popcorn. Having just brought their first son, Quinn, home, "it was time to take this icon of adulterated food and transform it into something anyone can feel good about eating and sharing," he says. They use paper bags that aren't chemically coated, and preservative-free, organic ingredients. "Plain and simple, our mission is to provide you with the best bag of microwave popcorn," he says.

Editors' comment: We liked the flavors -- parmesan and rosemary, Vermont maple and sea salt, and lemon and sea salt -- and felt quite gourmet pouring the flavor pouches into the bag. It's a nice gift for a foodie snacker.