The Olympics are a global stage for the world’s most elite athletes, which means they’re also a prime venue for premiering new tech. From host cities racing to build new infrastructure to networks adding more immersive viewing experiences, the Summer Olympics serve as an impetus for innovation.

In Rio, competitors are taking advantage of new gadgets and gear designed to improve their speed, agility and focus. Military-inspired surveillance systems are keeping spectators and support personnel safe. Data and information companies are developing new ways to make it easier for fans to follow the events from anywhere.

Related: Why Riding the #Rio2016 Wave Could Land Your Business in Legal Trouble

Here are 12 solutions that aim to make the 17-day event run more smoothly and elevate athletes to the top of their game -- and the number-one step on the podium. 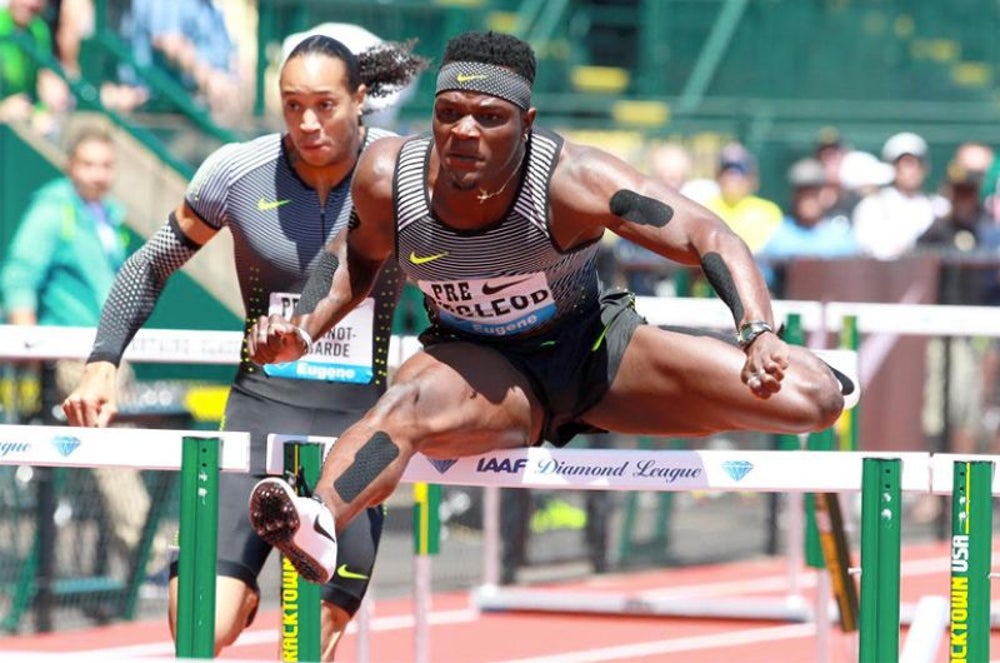 Since the 2000 Olympic Games in Sydney, Nike has been outfitting track and field athletes with gear designed to make them more aerodynamic. This year in Rio, the company’s solution is, of all things, spiky tape.

Nike’s Sports Research Lab has long been developing texturized gear for runners to help them reduce drag, but its newest invention is AeroBlades, which will make their first Olympic appearance in Rio. Nike’s AeroBlades are “formed nodes” that look like tiny hooks or spikes and reduce wind resistance by influencing the movement of air around athletes. The sports brand has produced leg and arm sleeves covered in AeroBlades, along with adhesive patches.

Related: Olympic Athletes Turn to Crowdfunding for Travel Expenses, Training Gear and a Ticket to Their Dreams in Rio

To test the drag-reducing performance and determine where patches should be placed on the body, Nike stuck AeroBlades to mannequins and placed them in a wind tunnel. They were then able to develop placement instructions for athletes, from sprinters to marathon runners, with the goal of helping them cross the finish line faster. 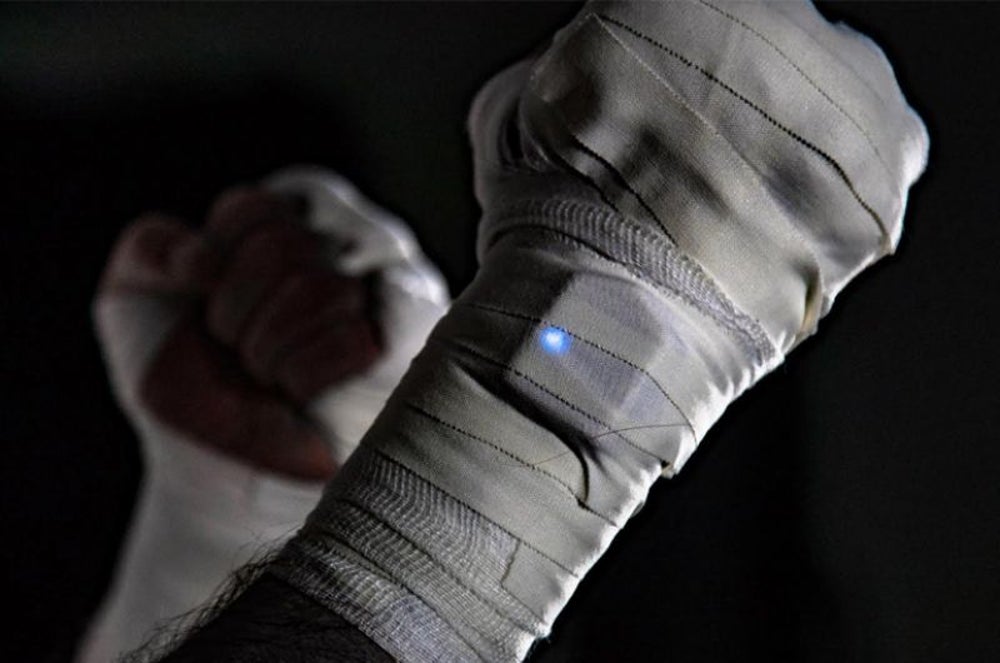 The Canadian boxing team hasn’t won an Olympic medal since 1996, but they hope to improve their record this year after practicing with punch-tracking system technology from Y Combinator startup Hykso.

Fighters place lightweight sensors under the tape on their wrists, which send data to a mobile app that counts punches and measures intensity and velocity. The app can even distinguish between the types of punches they throw.

The U.S. and Canadian boxing teams have been using Hykso’s technology during sparring and training. Previously, Boxing Canada Head Coach Daniel Trepanier had been using a manual clicker to count all of the punches. Now, he can analyze strategy, recognize previously undetectable punching patterns and help his team adjust them.

“Having access to this added layer of knowledge gives our team a huge competitive advantage heading into Rio this summer,” Trepanier said in a Hykso testimonial.

Hykso’s tracking systems are currently available for pre-order by the general public. 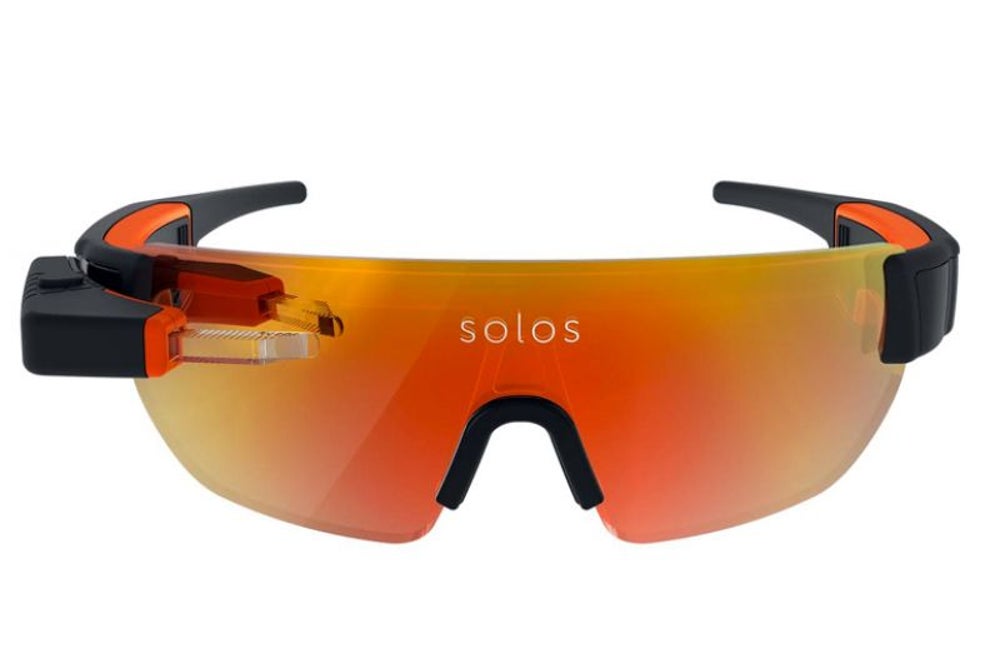 For training cyclists who want to check their vital signs and boost their performance mid-ride, Solos smart glasses provide an augmented reality view of the info, “heads up and hands free.”

Solos, an official sponsor of the U.S. Cycling Team, has partnered with the athletes to create a pair of shades that display stats such as cadence, heart rate, speed, distance, duration and more, layered over the road ahead.

The glasses, developed by Westborough, Mass.-based Kopin Corporation, are designed to be aerodynamic, stylish and comfortable. They also contain a speaker, which delivers an audio feed of the cyclist’s stats, and connect to a mobile interface.

While the U.S. Cycling Team has trained with Solos, they won’t be able to wear them during the races in Rio. 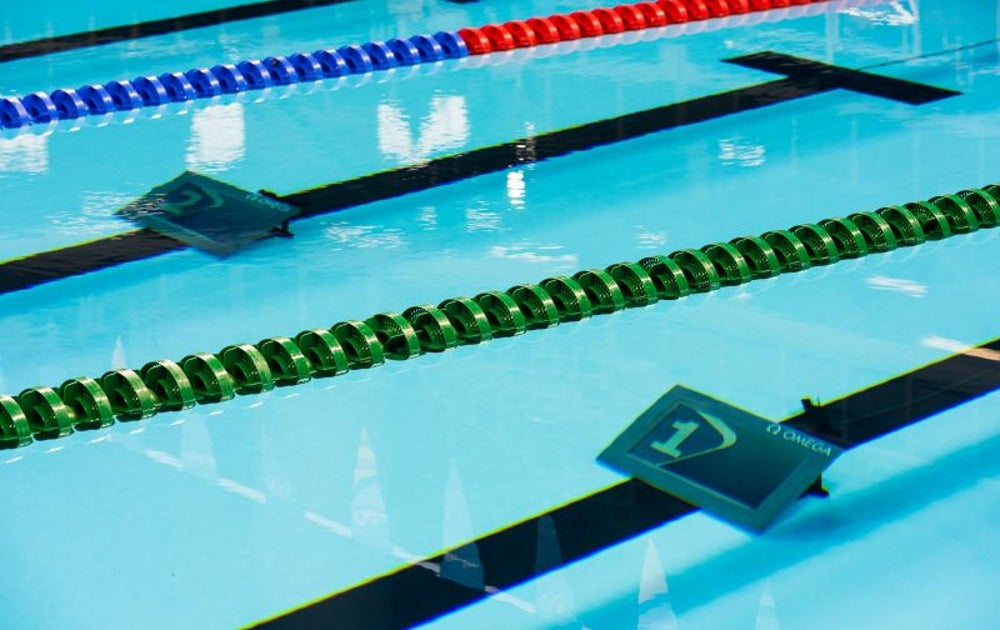 Watchmaker company Omega has been the official timekeeper for all but three of the Olympic Games since 1932, but this year, it’s expanding its role beyond official data-handling.

When swimmers are racing back and forth across the pool, they often have trouble keeping track of the number of laps they’ve completed. To eliminate this distraction and replace the human officials who previously displayed numbers at the pool’s edge, Omega has developed underwater lap counters.

Installed at the bottom of each lane, the counters update every time a swimmer touches a pad on the wall. The numbers will be visible to swimmers without requiring them to look up from the pool. They’re designed solely for in-the-moment use by competitors, rather than official timekeeping for the races, Omega clarifies on its website.

Omega premiered the lap counters at the FINA World Swimming Championships in Doha, Qatar, in December 2014. In Rio, the devices will be used in the 800-meter and 1500-meter freestyle swimming events, according to Rio2016.com. 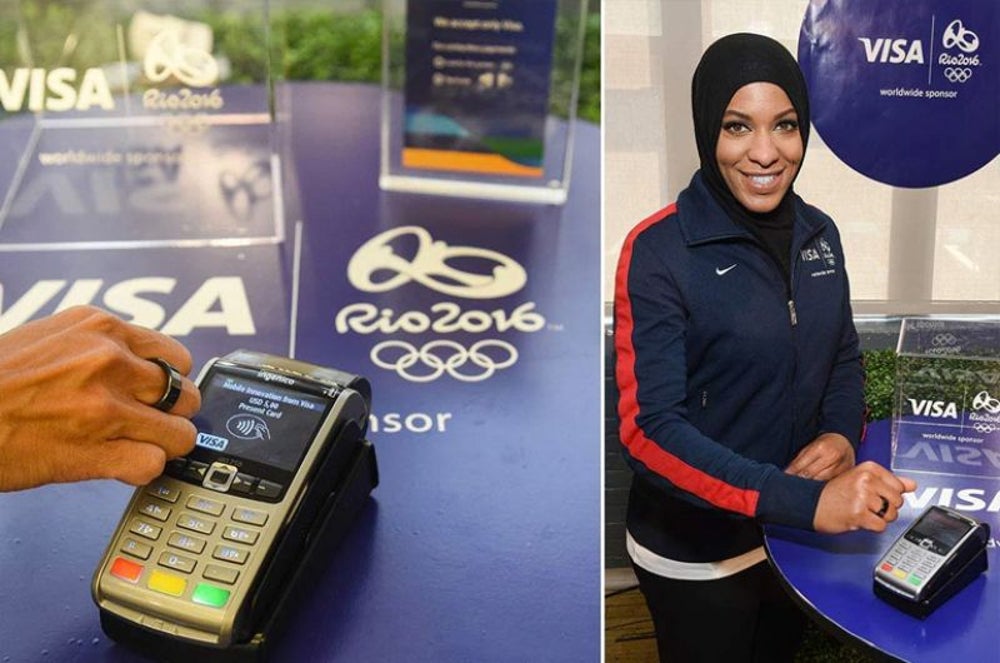 Visa has teamed up with Brazilian bank Bradesco to create a bracelet that allows spectators at the Rio 2016 Olympic Games to pay for things by waving an arm over a sensor. All 4,000 point-of-sale terminals at Olympic venues are equipped with near-field communication tech that will power these transactions. NFC is the same type of system that powers Apple Pay and Google Pay.

In addition, Visa is providing all of the 45 Olympic and Paralympic athletes it sponsors with wearable rings they can use to make purchases in the same manner. The rings are water resistant to depths of up to 50 meters, and they don’t contain a battery or require recharging, according to Visa. 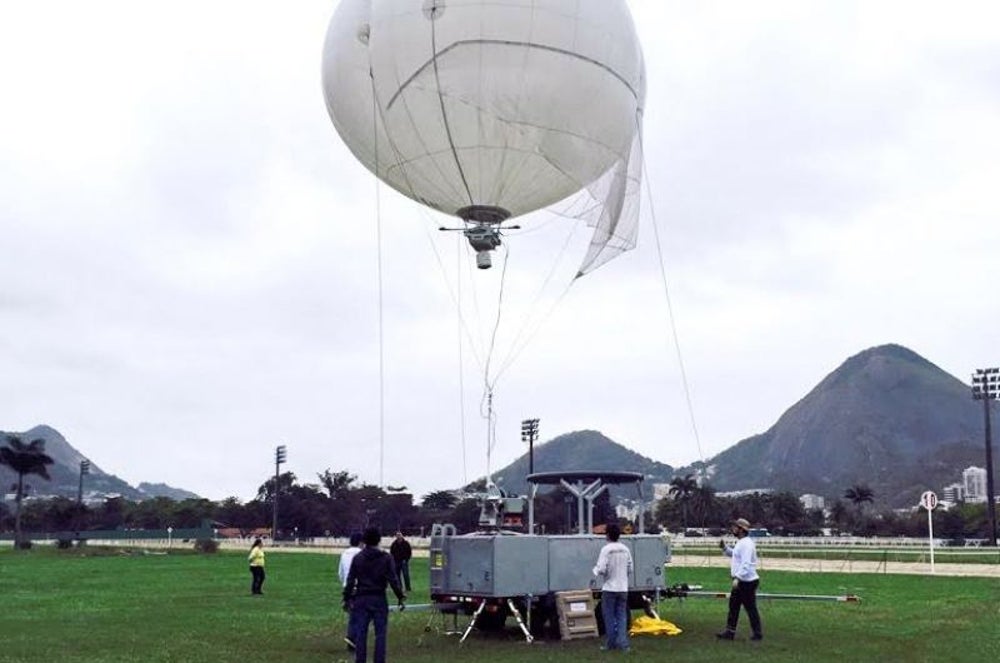 To keep athletes and spectators safe, Rio has spent $8 million on a contract with Logos Technologies to provide aerial surveillance.

While Logos originally developed its technology for the U.S. Department of Defense, this is the first large-scale civilian application for its sophisticated imaging system, Simera. Logos has installed four 40-pound balloons, tethered to the ground, each with 13 high-resolution cameras affixed to them. All cameras combined are capable of capturing three photos per second of the surrounding area, with each balloon covering about 55 square miles, according to Sport Techie.

Operators can zoom in on an unlimited number of areas, connect to security cameras on the ground and communicate with law enforcement officers. While the cameras lack facial recognition technology, the system does archive video so operators can retrace a suspicious person’s path.

Despite privacy concerns, Simera’s test-run at Rio could pave the way for Logos to provide surveillance at more large-scale events and commercial areas in the future. 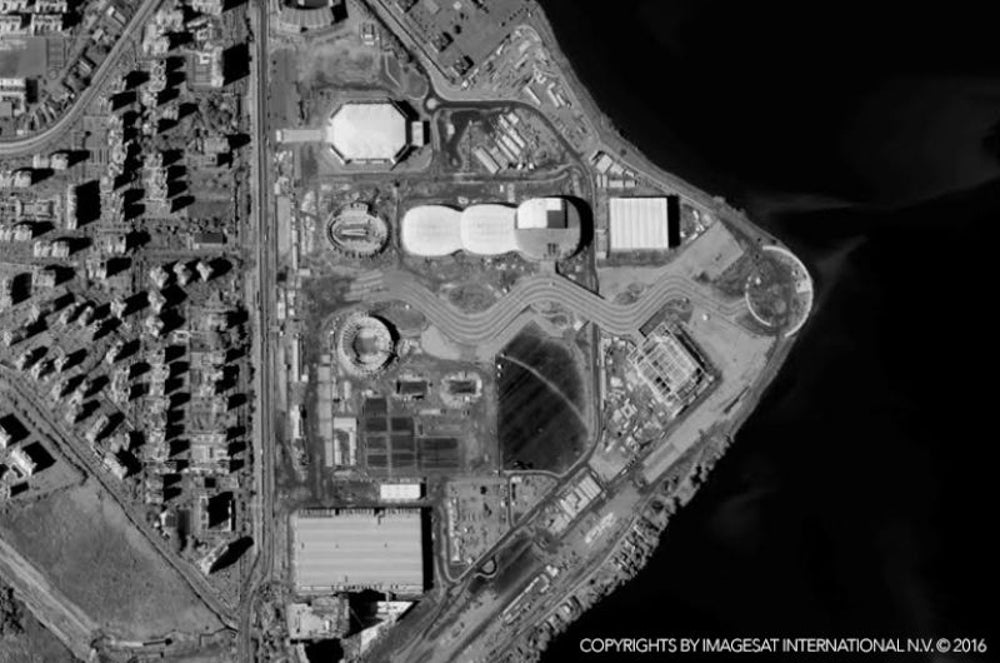 Security systems are also stationed outside the Earth’s atmosphere for Rio. The Eros-B satellite, owned and operated by Israeli company ImageSat International, is providing detailed inspections of Rio de Janeiro during both the Olympic and Paralympic Games.

The Eros-B has been in low Earth orbit since 2006, taking pictures of the Earth’s surface. But now the commercial satellite, which can capture high-resolution images of up to one and a half feet in an area of approximately 31 miles, is helping to identify people, cars and even goods during the games, according to Jewish Telegraphic Agency.

Previously, the Eros-B has been used for disaster, urban, maritime and military monitoring.

8. Google for the Games 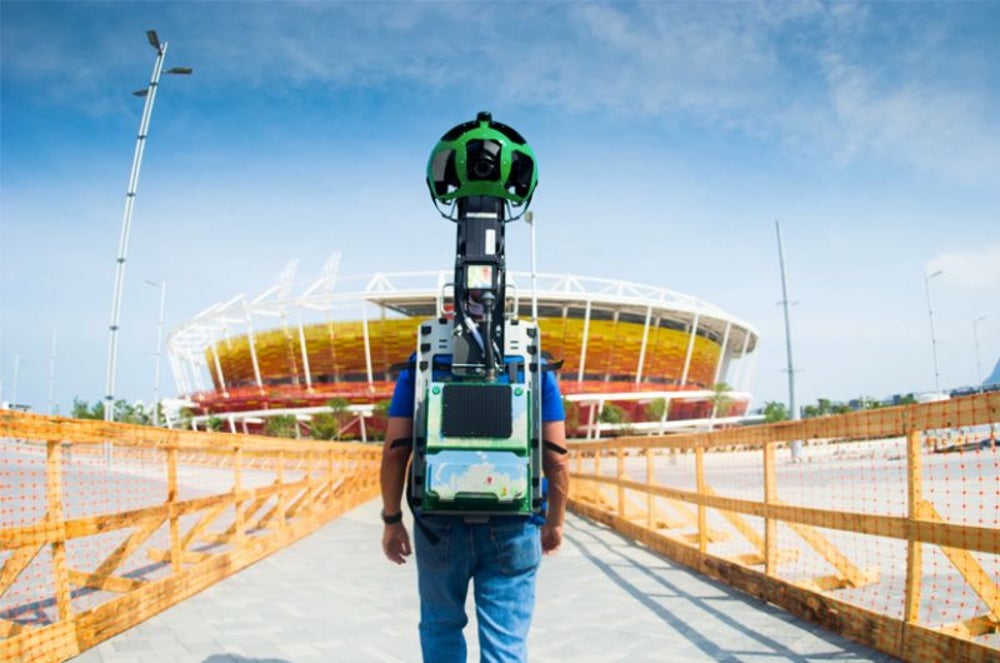 When you enter an Olympics-related query, Google will display a chart featuring a variety of information about the games at the top of your search results. You can click through to get information about particular sports or countries, as well as find TV schedules and medal wins. In addition to the usual bio that appears in the right sidebar when you search for a person, Google has prepared special overview pages for Olympians.

If this system isn’t convenient enough, you can also register to get automatic updates through the Google mobile app.

As for Google’s other services, it’s partnered with official broadcasters for YouTube streaming in more than 60 countries. And thanks to advances in mobile livestreaming, 15 YouTube curators will also be broadcasting from their phones.

To better represent Rio de Janeiro, Google Maps has added its previously absent working-class favela neighborhoods --including several businesses within them -- and produced a 360-degree virtual tour of the city for people around the globe to explore. 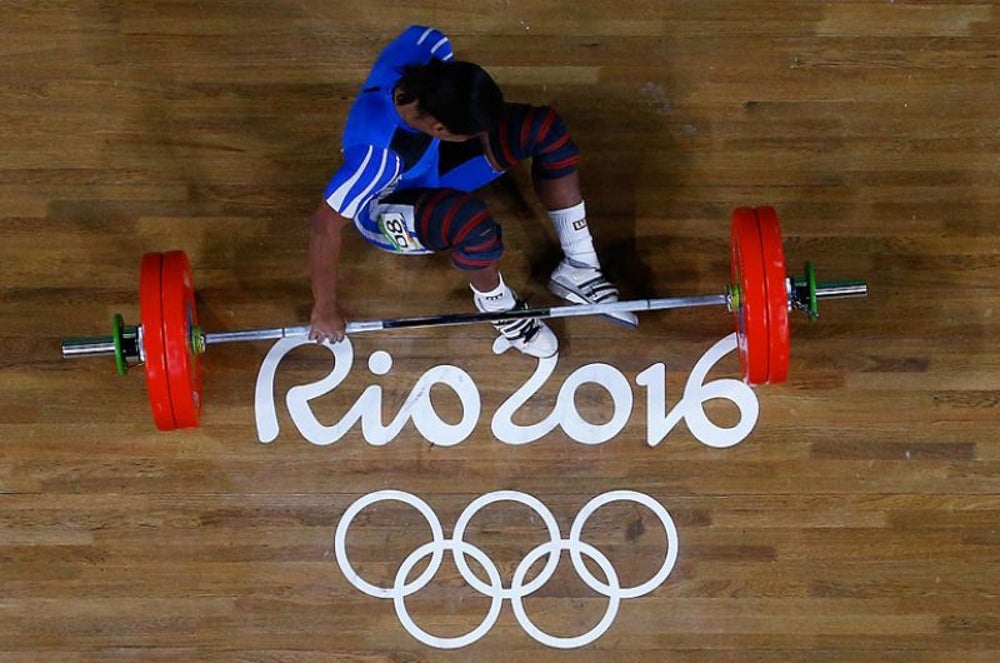 Getty Images has launched a new platform specially designed for the Olympics -- and for the everyday user.

The Rio 2016 Olympic Games platform organizes the Getty library, which contains more than 200 million images, into multiple searchable galleries. The platform also includes pages highlighting individual athletes, sports and countries, as well as an archive section featuring photos from 1896, the year of the first modern games.

A team of more than 120 Getty photographers is present in Rio, and Getty expects them to gather more than 1.5 million images over the course of the Olympics. Many of them are being taken with 360-degree cameras and both overhead and underwater robotic cameras.

The images will appear live on the Getty website within two minutes from the moment of capture, according to the service. Getty has also improved the ease with which its users can share the images on social media in close to real time.

Beyond these features, Getty’s iOS and Android apps now support 360-degree images and Google Cardboard, according to Getty. 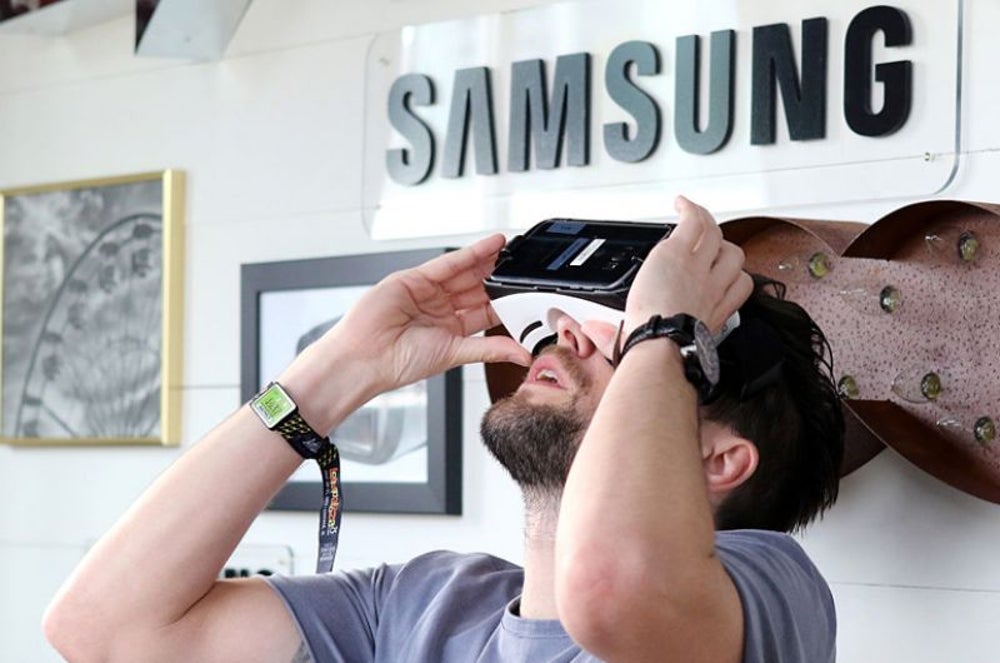 The opening and closing ceremonies, men’s basketball, gymnastics, track and field, beach volleyball, diving, boxing and fencing are all being made accessible in VR to anyone with both a Samsung Galaxy smartphone and a Samsung Gear VR headset via the NBC Sports app. Samsung customers with a TV provider can also see the VR content via TV Everywhere. One sport per day will be available to users in the U.S., from Aug. 6 through Aug. 22, on delay.

This is the first time Olympics programming will be available in VR. NBC first tested the capability during the Winter Youth Olympic Games in Lillehammer, Norway, this past February, according to NBCOlympics.com. 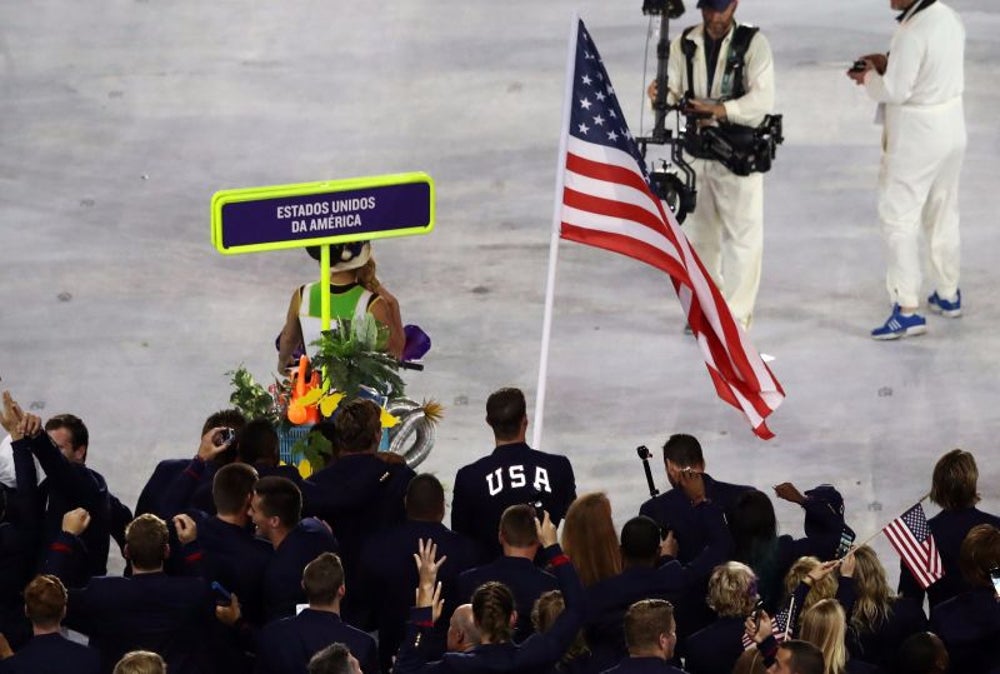 Polo Ralph Lauren worked with Flextronics to embed electro-luminescent panels into Phelps’ blazer. The panels are located on both the front and back of the jacket, and they light up the U.S. Olympic Team logo and “USA” with the flip of a switch hidden in the pocket, according to a Ralph Lauren blog post.

#MichaelPhelps to lead #TeamUSA into #Rio2016 opening ceremony with Bay Area tech on back. https://t.co/ArqsOWwb14 pic.twitter.com/dH5K43AkYe 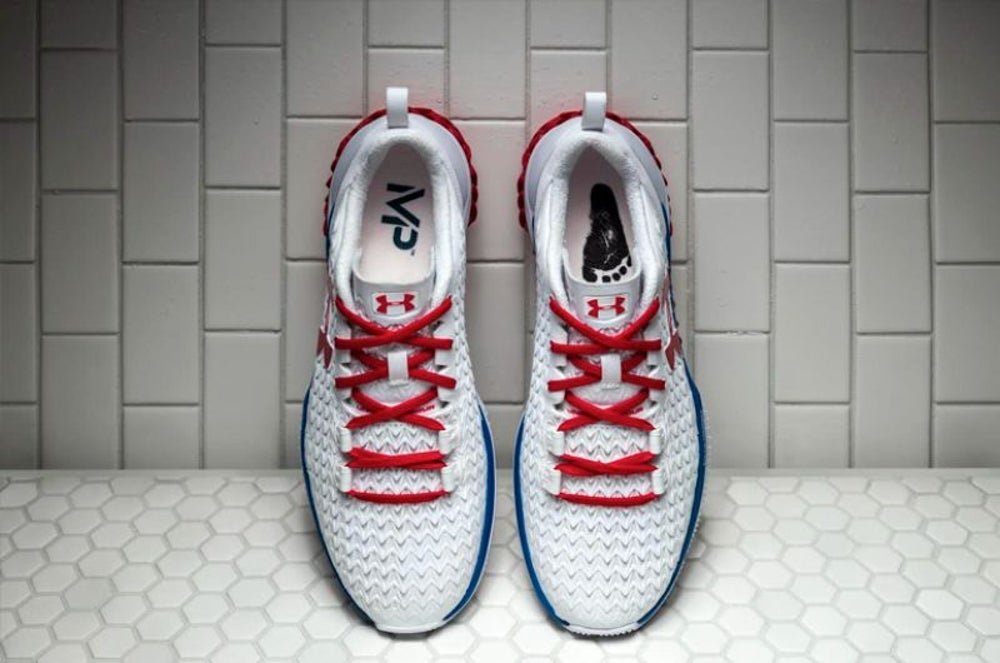 The shoes are for marketing purposes. Under Armour created them to generate buzz around the company’s UA Architech 3-D-printed shoes, which premiered earlier this year.

The midsoles of the UA Architect’s -- and Phelps’ new sneakers -- is 3-D printed. But Phelps’ pair contains a special touch: the insole features a footprint of Phelps’ infant son, Boomer, according to Fortune.

Perhaps the most prominent shoe-wearing athlete the company sponsors is 2015 and 2016 NBA MVP Steph Curry, who has opted to skip this year’s Olympic Games in order to rest after a knee injury.
More from Entrepreneur