The Most Intriguing Hardware at IDF 2016


With no new major processor announcement directly tied to the show this year, the Intel Developer Forum (IDF) was a little hardware-deficient.

The two keynote addresses, from Brian Krzanich on Tuesday and Murthy Renduchintala and Diane Bryant on Wednesday, dealt more with the broader issues Intel is exploring within the Internet of Things, such as the buzzy Project Alloy headset, 5G mobile connectivity and silicon photonics in the data center. But in the Technology Showcase section of the Moscone Center, where various tech companies vie for your attention (and, if you're a member of the press, your coverage), there were plenty of interesting components and peripherals to be unearthed.

Here's some of what we found that proves, no matter what's going on upstairs, hardware is still alive and well and living at IDF. 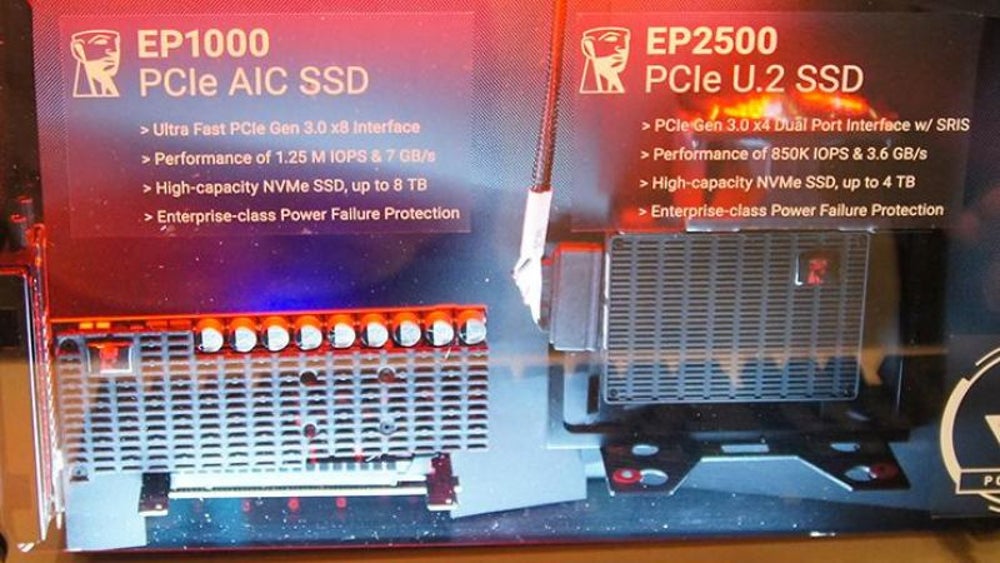 First up on my tour was Kingston, a company that's well known for its memory and storage products. At its booth, the company was showing off two impressive enterprise-class NVMe solid-state drives (SSDs) that both use PCI Express (PCIe) 3.0 for their connectivity and claim top-notch power failure protection. The EP1000 uses a PCIe x8 slot and boasts performance of 1.25 million IOPS and data transfers of 7GBps; it comes in capacities up to 8TB. The U.2-based EP2500 uses PCIe x4 to attain performance up to 850K IOPS and 3.6GBps, and is available in capacities up to 4TB. 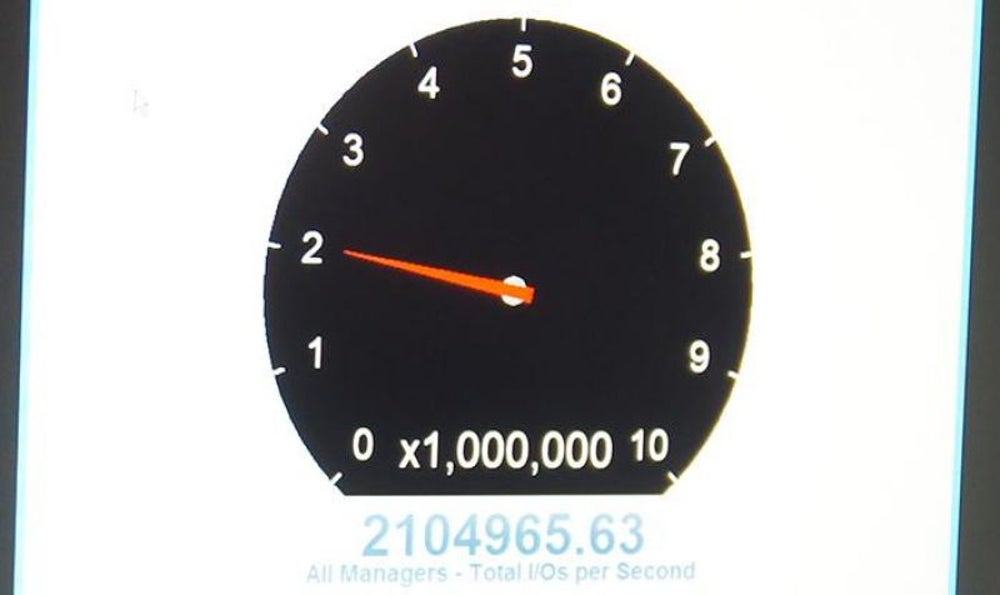 Though either drive would be pretty impressive on its own, when their powers are combined, they become even more so. Kingston took great pride in this real-time display of an Iometer test running both drives at once, in which they attained upwards of 2.1 million IOPS. 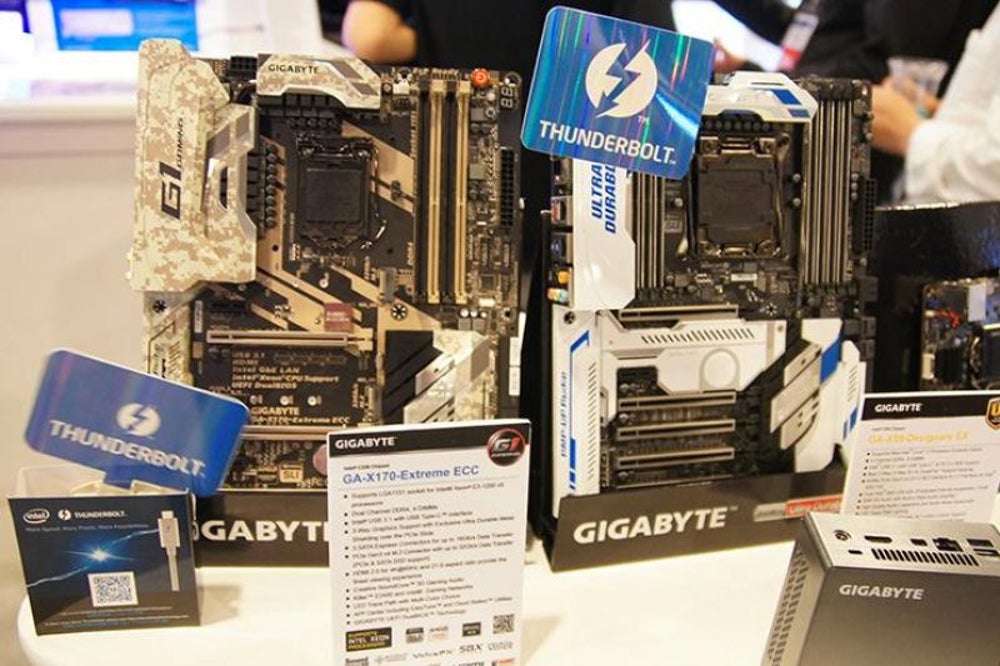 Gigabyte manufactures all sorts of components, including some of the most visually distinctive motherboards out there. The military-styled GA-X170-Extreme ECC (left) is an LGA 1151 model with support for plenty of cutting-edge technologies like USB-C, SATA Express, HDMI 2.0 and more. The GA-X99-Designare EX (right) is designed for Intel's highest-end Broadwell-E processors, and has space for eight DDR4 DIMMs, U.2 storage support and LED Trace Path lighting, in addition to an abundance of other enthusiast features. 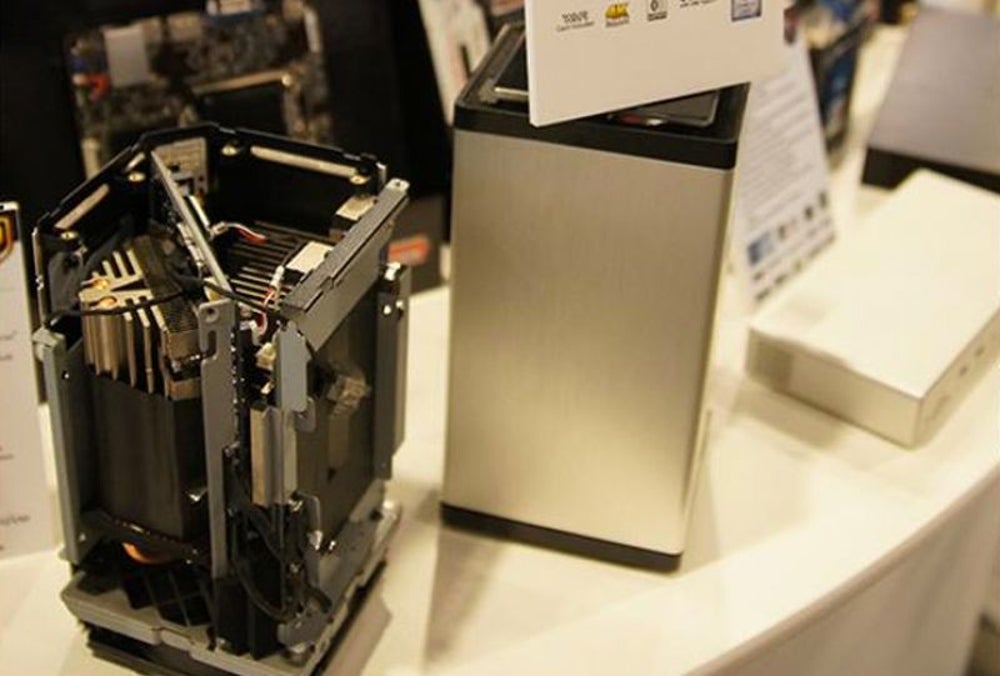 Gigabyte packed a full gaming PC into this tiny package (it measures about 8.66 by 4.33 by 4.33 inches, HWD). The Brix Gaming UHD, which will be available later this year, sports an Intel Core i7-6500HQ processor, a discrete Nvidia GeForce GTX950 graphics cards, two SO-DIMM memory slots, two M.2 storage slots and plenty of other current-generation components and connectors. 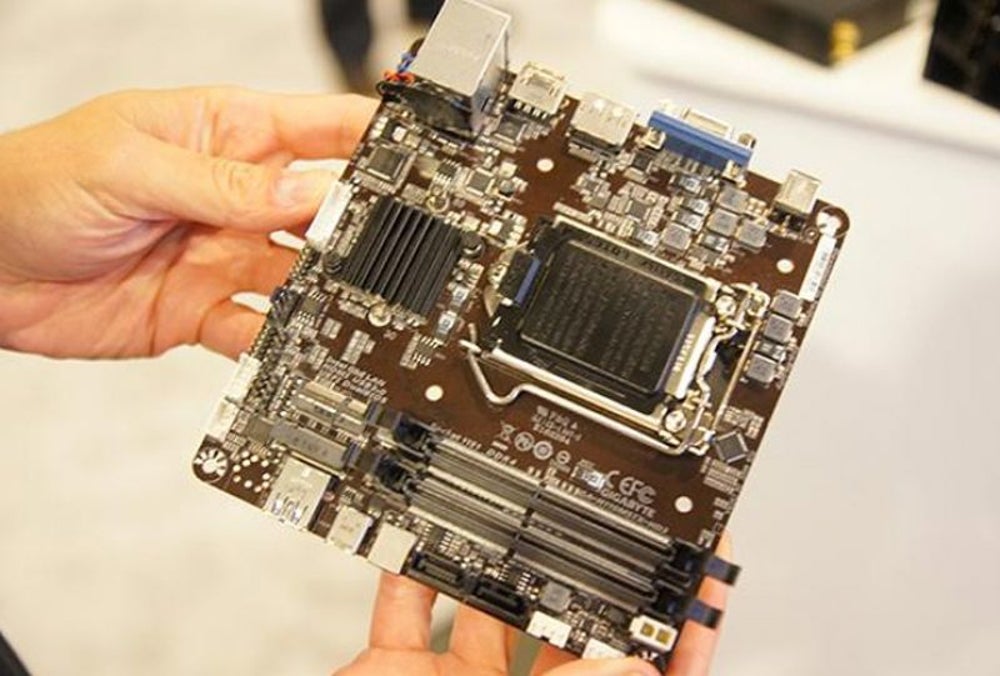 This Gigabyte motherboard, intended for industrial use, does not use one of the traditional ATX or ITX form factors. Instead, it's based on the Mini STX motherboard form factor that was released last year and shown off at IDF 2015. (It earned its original moniker, "five by five," because it measured about 5 inches on all sides.) 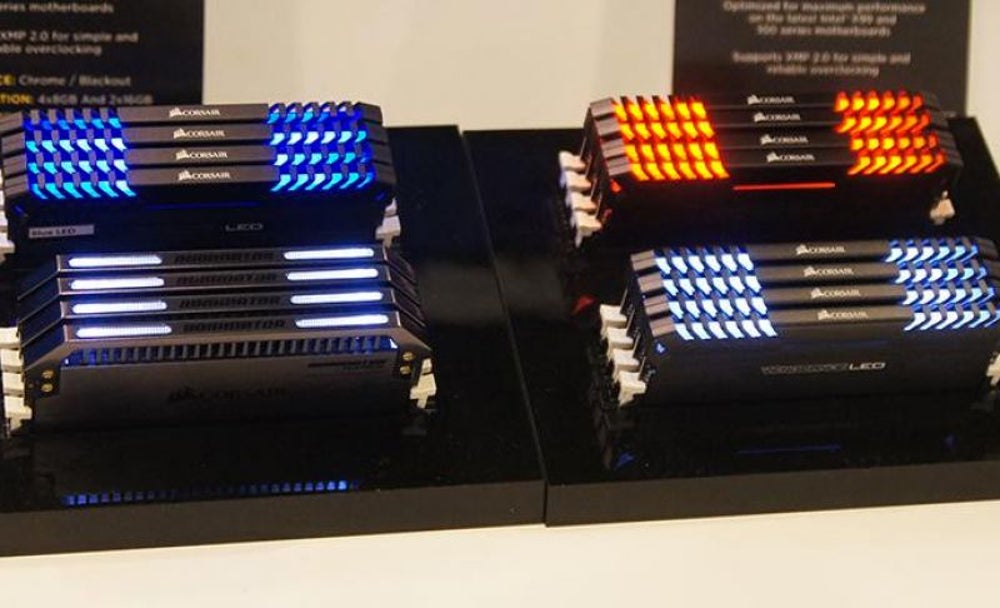 If you care as much about how your RAM looks in your computer as how well it performs, Corsair has you covered. On the left is its special edition Dominator Platinum series (only 1,000 kits will be made) of high-speed DIMMs that are optimized for use on Intel's current top-tier motherboards and bear eye-catching styling and adjustable LED lighting. If you still want bling but are willing to settle for slightly less, the Vengeance LED Series (right) has all of the same technical specs and still grabs you visually. 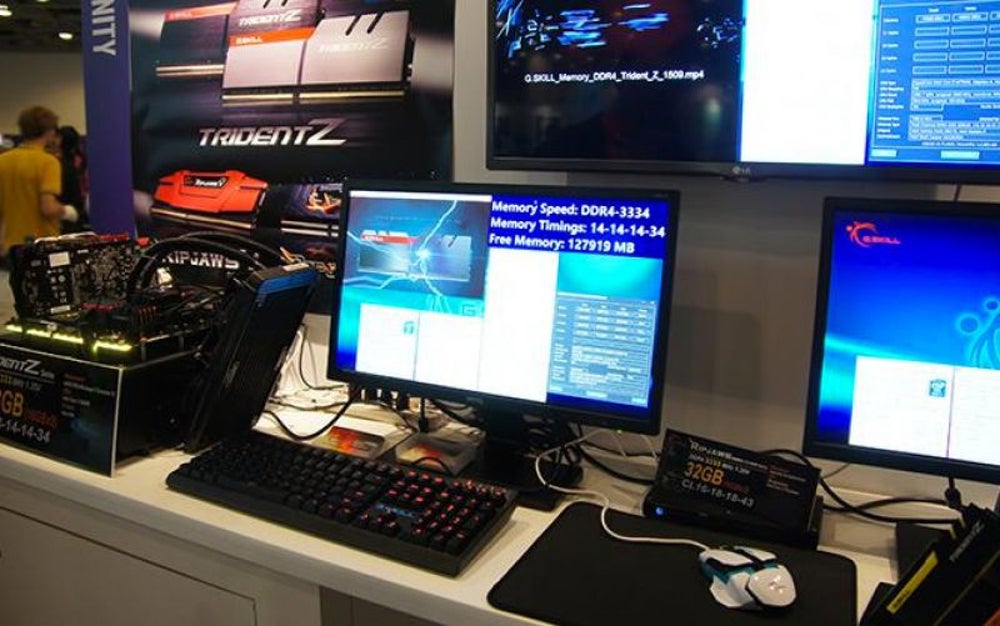 Although G.skill is best known for its memory, it produces a variety of enthusiast-oriented products, including the Ripjaws Gaming Mouse and KM570 MX keyboard, which doesn't require software to adjust its completely configurable (and animated) backlighting. 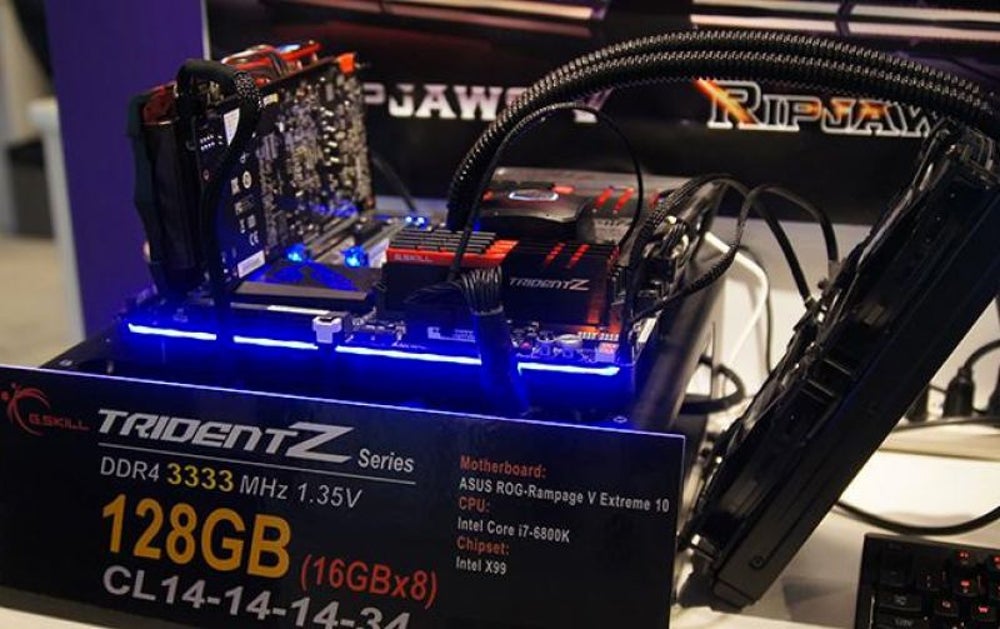 Of course, G.Skill showed off some of its splashiest memory, too. The Trident Z series of 1.35-volt DDR4 RAM can be overclocked to 3,333MHz. 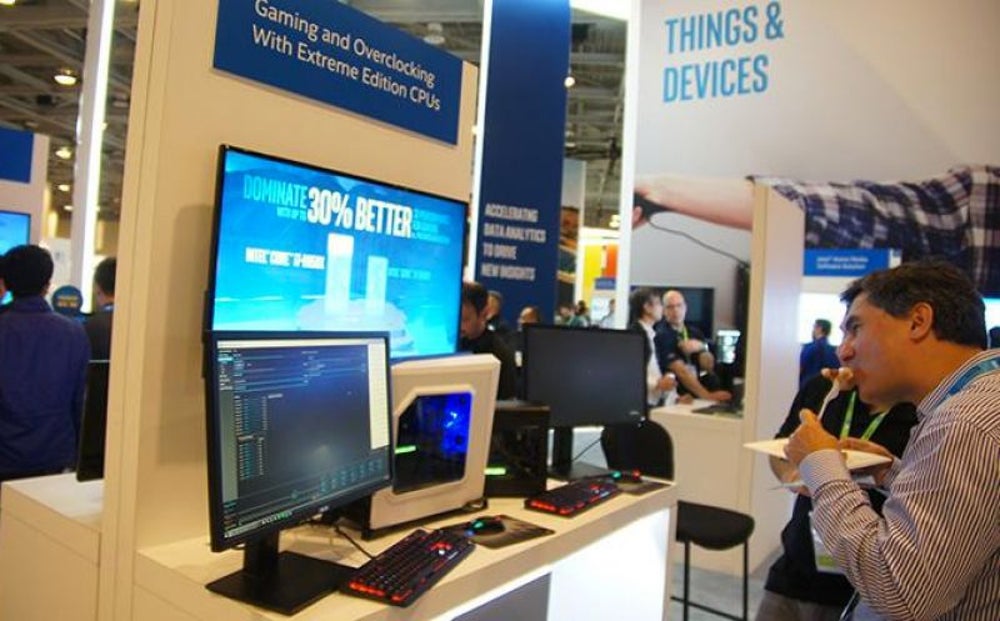 Even Intel got in on the hardware action -- a little. This booth was the company's opportunity to demonstrate the powerful capabilities incorporated into its Core i7-6950X Extreme Edition processor. 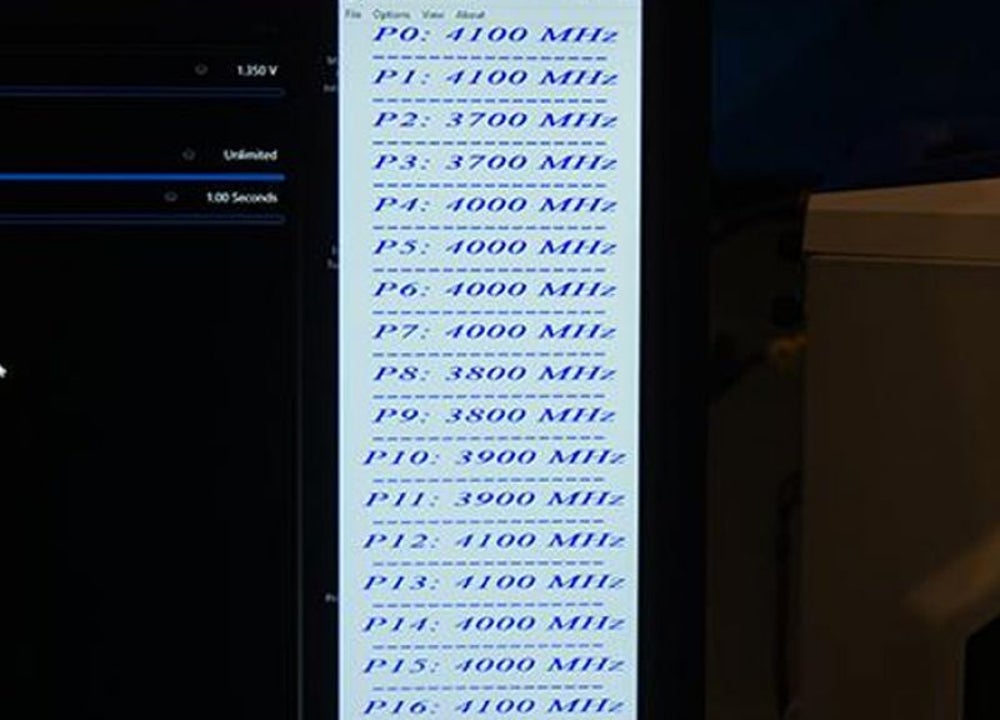 This screenshot shows the speeds of all the threads used by the 10-core Intel Core i7-6950X Extreme Edition processor. Note that the P3 and P4 speeds are "only" 3,700MHz each -- the Intel rep at the booth complained that he got a "bum chip."
More from Entrepreneur

#6 on the Franchise 500: Ace Hardware Is Fusing Online Sales With In-Person Service

How to Bulletproof the Internet Connectivity in Your Office

From Prototype to Production: 3 Things You Must Do