See How These 10 Companies Celebrate Halloween

Bring on the costumes, competitions and candy.
Next Article

A great way to bring your staff together and highlight your company's culture is to create unique office holiday traditions. The weeks leading up to Halloween in particular is a great time to encourage employees to channel their creativity into something fun and unexpected.

We got a look behind the scenes at 10 companies' celebration of the spooky and scary holiday. But we also want to hear from you: How does your business get into the Halloween spirit? Let us know on Facebook and Twitter, and be sure to include photos of your festivities -- we want to see those costumes!

Related: How Ridesharing Companies Get More Drivers on the Road for One of Their Busiest Days: Halloween 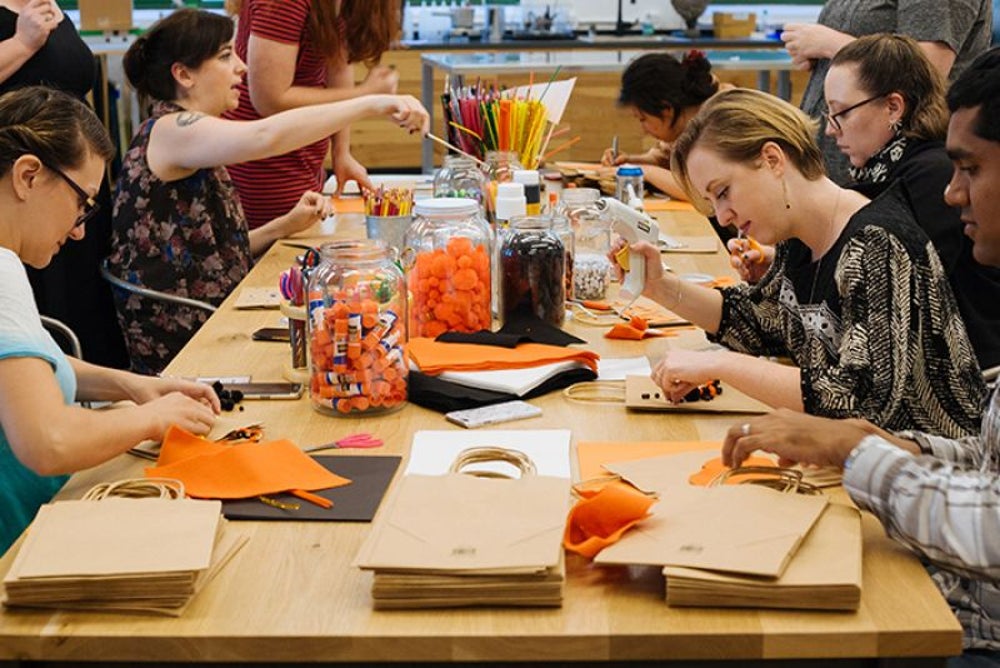 It's probably no surprise that the Brooklyn, N.Y.-based creative marketplace has a number of crafty Halloween traditions. During the month of October there is costume-making in the Etsy Labs where employees use all the tools at their disposal, such as sewing machines, a letterpress and 3-D printers to make their costumes pop. Awards are given out on day for the most inventive looks.

There are also regular "crafternoons" where staff members take a break and make something fun such as treat-or-treat bags for the popular family and pet friendly Halloween bash. 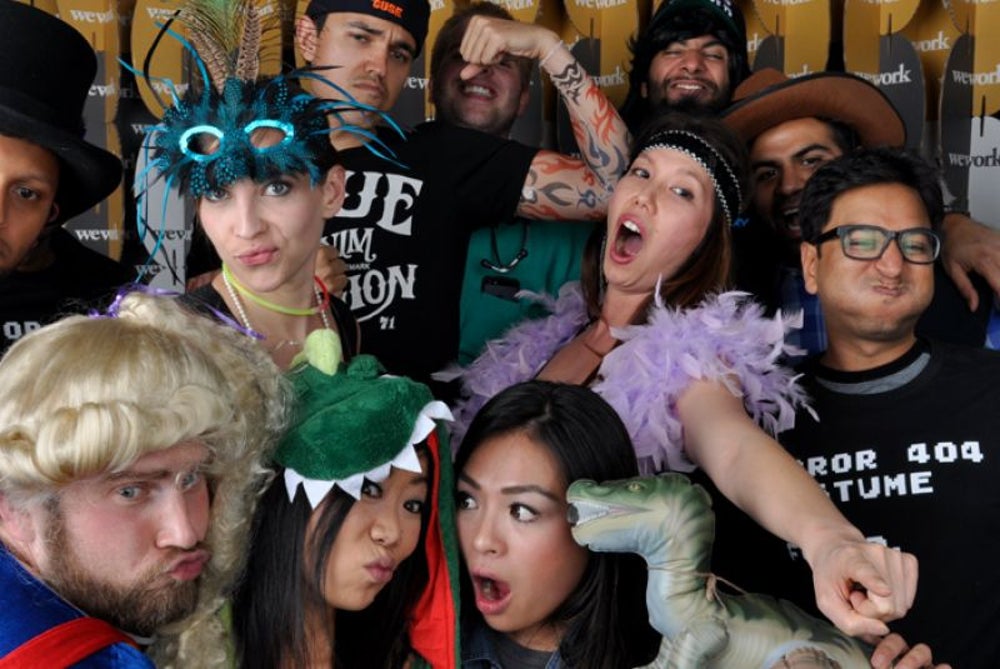 The co-working startup is big on team costumes. Karly Venuto, the company's head of events, says that the holiday is so embraced by WeWork's team because it is all about connecting with others and expressing creativity. She recalled that one year, the HR staff made team costumes inspired by Day of the Dead, and the somewhat buttoned down legal team came dressed as Minions.

"Moments like Halloween give us a chance to express ourselves in a creative way," Venuto says. 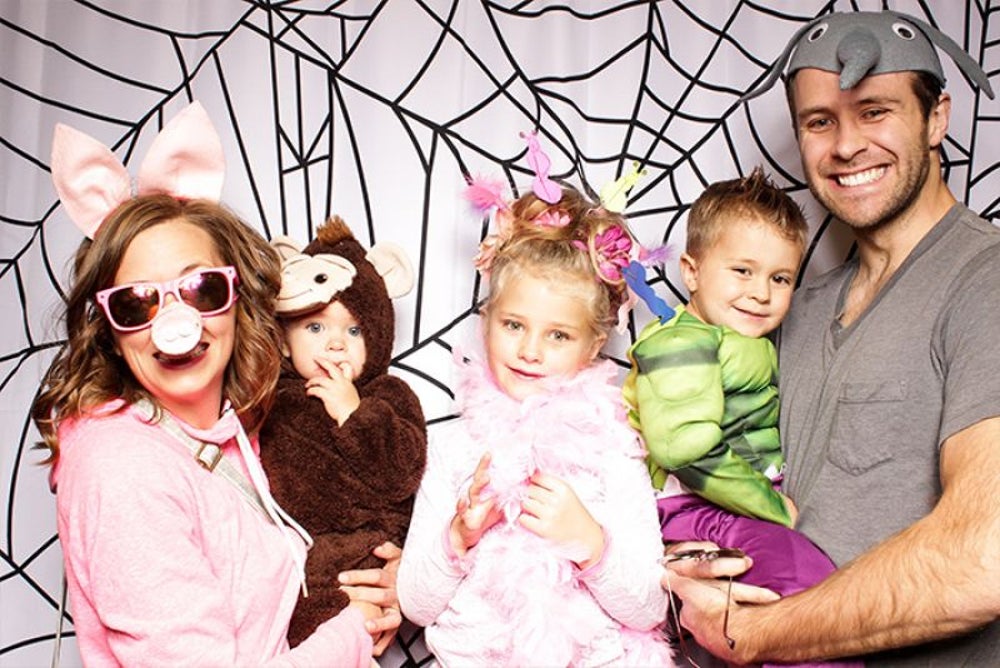 The Boston-based marketing and sales startups has always been big on Halloween. The festivities include office trick-or-treating, kid-friendly activities and a creative costume competition.

"It's a day that brings out the best in HubSpot's culture -- highlighting the creativity of our employees and welcoming our friends and family to join in the fun," says Laura Moran, the company's senior global media relations manager. 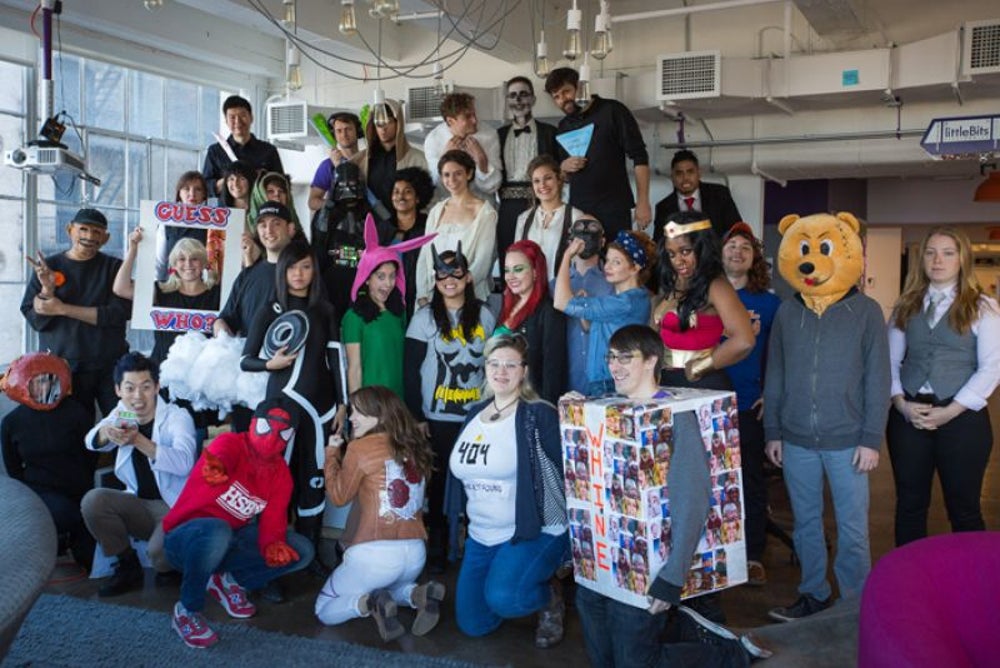 The New York City-based company is the maker of DIY open source technology and hardware kits for inventors of all ages. PR Manager Casey Koppelson says that members of different teams use the litteBits tools to create interactive decorations such as spooky doorbells and spider pranks.

Every employee comes to work in costume -- the homemade getups are often created with help from the startup's fully equipped makerspaces -- for the company's annual costume contest. At the end of the day, awards are handed out, and Happy Hour commences, complete with signature Halloween-themed cocktails, such as this year's Almond Joys, made by the littleBits powered DrinkerBot. 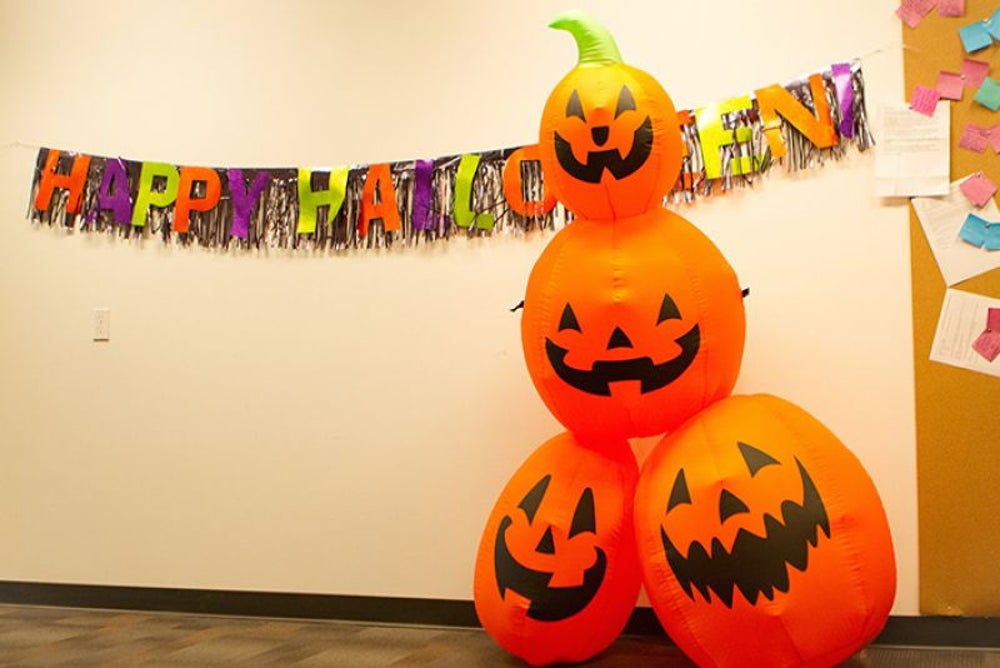 The Seattle, Wash.-based startup helps people connect with home improvement professionals. Employees bring in pumpkins to carve and decorate and peers vote on their favorites. They also come to work in costume for the company's annual competition, and are encouraged to bring in their families to trick or treat around the office, with each section providing a different treat for the kids.

"I think it’s a positive thing for our culture," says Ronnie Castro, Porch's co-founder and VP of customer success. "It's fun for people, it brings the company together and doesn't feel forced. We have a good time." 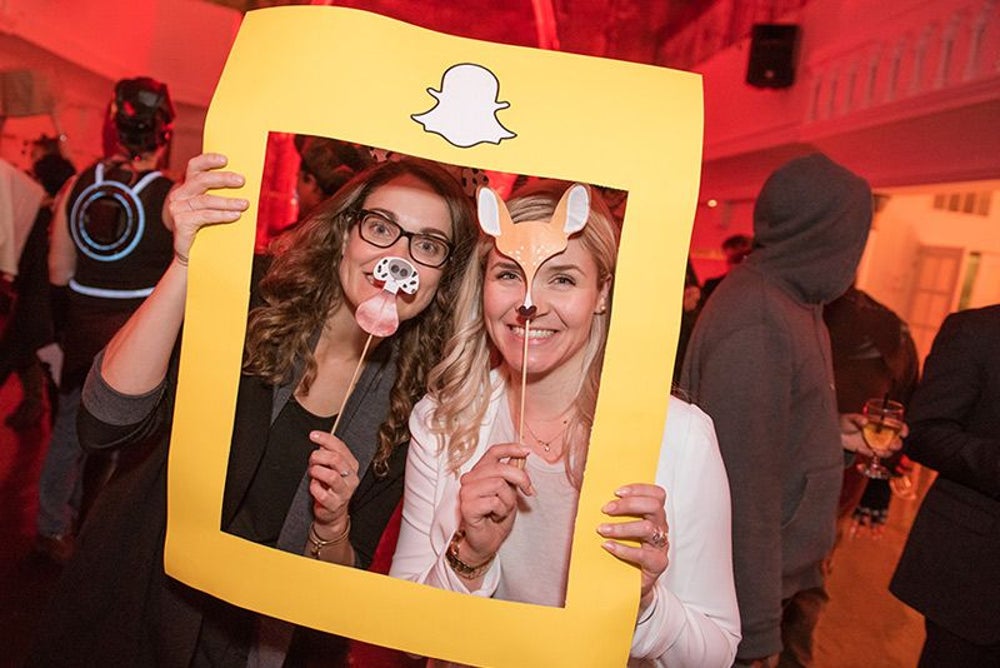 The staff of the Toronto, Ontario-based marketing firm are big fans of Halloween, with a full complement of events leading up to the day, including decorating the office, a pumpkin carving contest and a party. Employees frequently build their costumes and begin planning a few months out.

Klick co-founder and CEO Leerom Segal recalls that one team put together costumes inspired by Michael Jackson's "Thriller" video, complete with a choreographed dance. "Anything we can do to energize the team and drive engagement is something we see as worthwhile," he says. "Anything our people are enjoying, we'll put more time into. When people are happier, it creates for better working relationships." 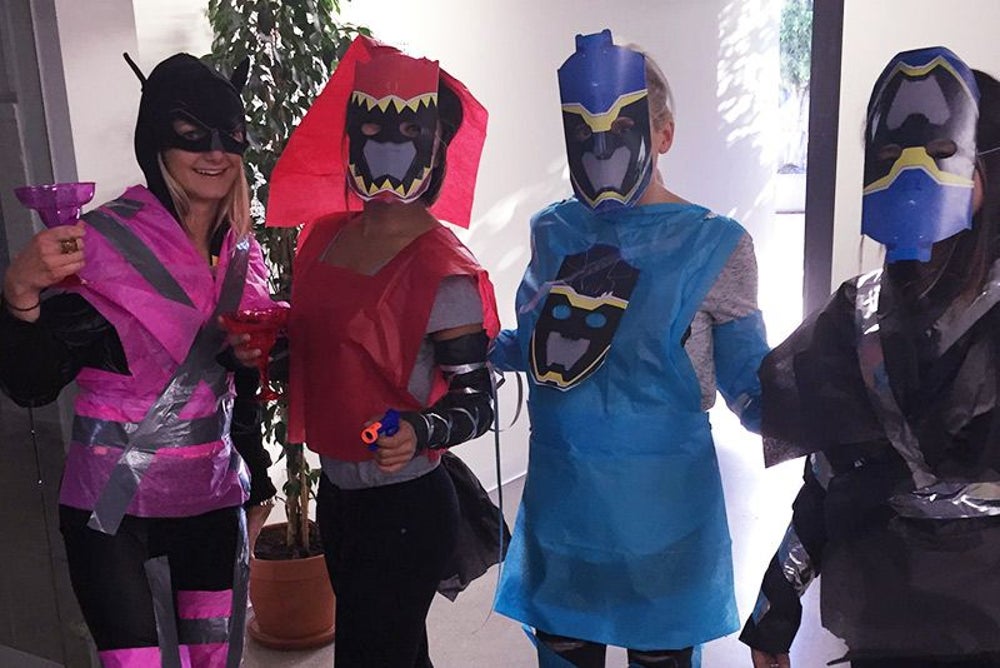 The Santa Monica, Calif.-based customer service and task outsourcing startup not only hosts a costume contest for employees, but for the company's office dogs as well. There is also a company-wide potluck where everyone votes on their favorite dish.

"I think it represents the culture we're trying to build here," says TaskUs recruitment manager Lauren Miller, who adds that the holiday traditions are a major part of establishing "a general feeling of gratitude and appreciation for each other." 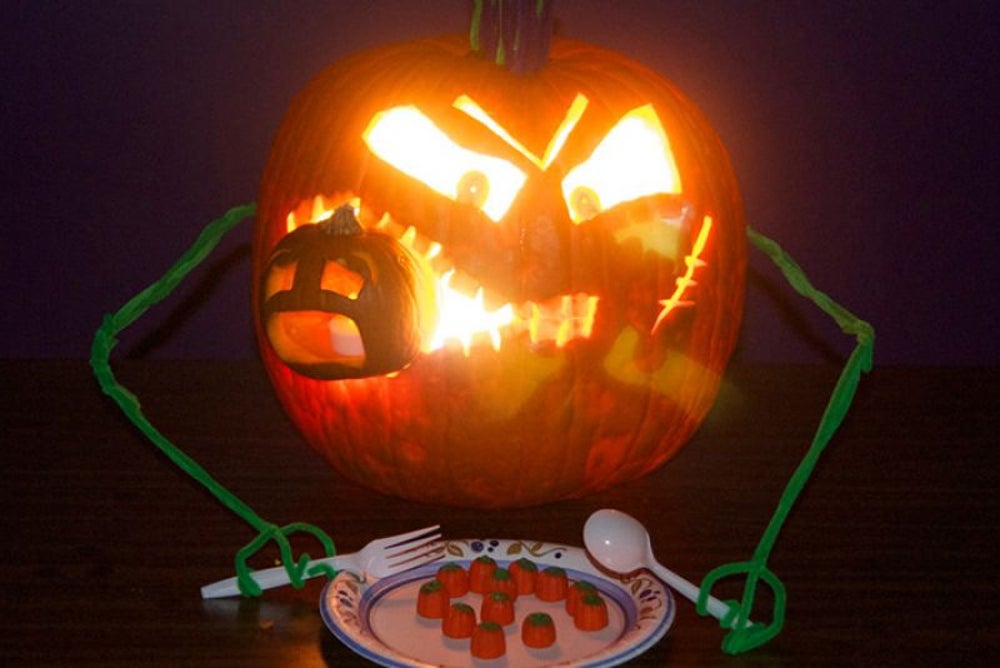 The Arlington, Va.-based web design and development firm has held a pumpkin contest for more than 10 years. The pumpkins are handed out two weeks before Halloween, and teams have one week to carve and decorate their pumpkins in the most inventive ways possible. The photos of the final products are posted on Facebook and the team with the most votes get treated to lunch by the company, and gets a place of honor on Matrix Group's website.

"It's a chance to play during work hours, do something together that's not strictly work-related and be creative in a tactile, non-digital way," says CEO and chief troublemaker Joanna Pineda. 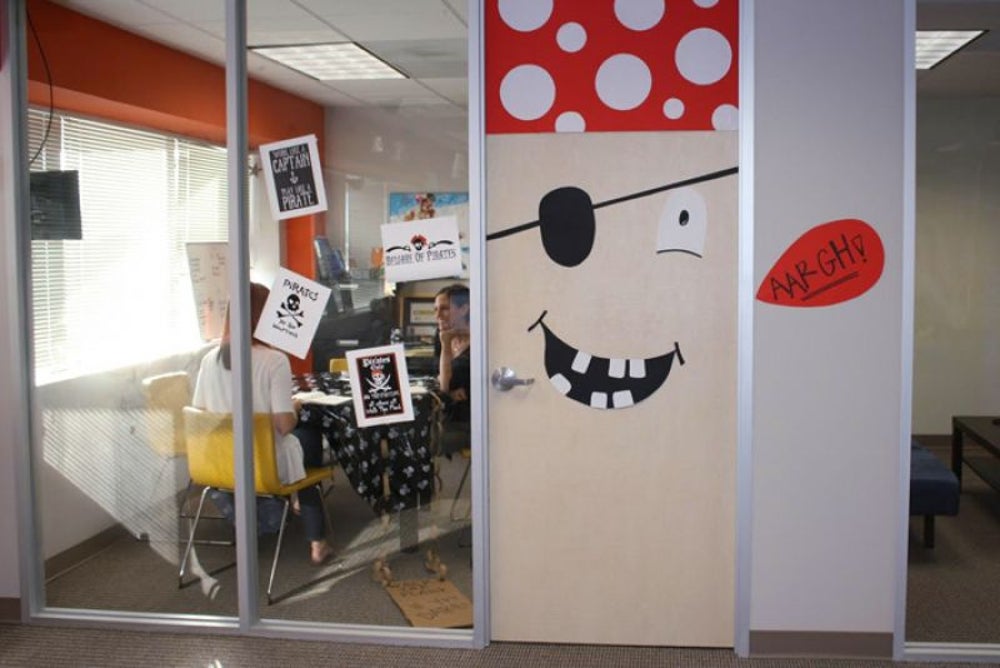 The Houston-based PR agency really gets into decorating the office. During the first week of October, every staff member goes to Target with $10 each and has 10 minutes to get everything they need to decorate their desks. They have two weeks to complete the task and can use anything that is in the office, but no outside supplies are allowed. The work environments are judged by the firm's clients and the winner gets a trophy.

"We save everything from past years and may be the only company in town that has separate storage just for our Halloween decorations," says Integrate founder Allie Danziger. "October is always our busiest month of the year so the desk decorating contest has always been a great stress reliever and a way for the hardworking employees to actually look forward to what is normally a crazy month." 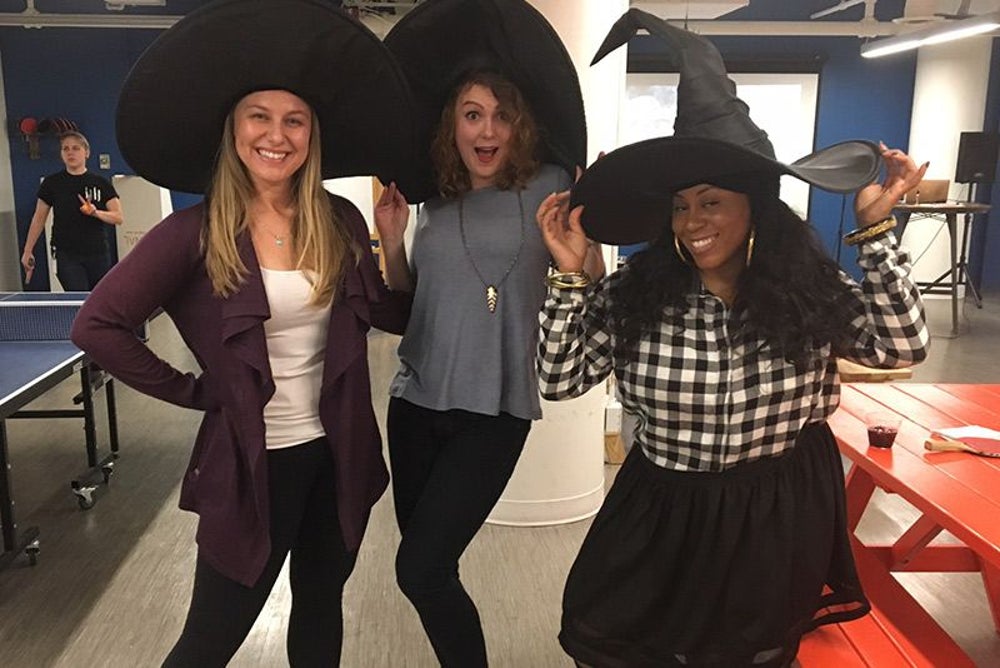 The Raleigh, N.C.-based digital marketing and advertising firm holds a whole host of Halloween activities, including a monster drawing competition, a jack-o-lantern carving contest, a costume fashion show and competition and a Halloween trivia contest. There is also office trick-or-treating and each department offers up special treats. The day ends with pizza and holiday-themed cocktails.

"A departure from the norm is always fun for us, so much so that we have a special employee committee dedicated to planning something to honor each holiday and to plan special events," explains Sara Schroeder, VP of human resources. "We love to laugh and joke around with one another. As we've grown from a very small startup to a global organization, it's important that we uphold these traditions and maintain a bit of what makes us special.
More from Entrepreneur