Here Are the Things at CES You'll Actually Want to Buy

Automate and personalize your life with these gadgets that revolutionize the most basic activities.
Next Article

Some gadgets work better in theory than practice. Many are concepts, designed more for the “whoa” factor or to make a point about the state and potential of technology in our world, than for practical use.

Here and there, though, a contraption that wows also works for everyday life. It catches you off guard with some capability you never thought you needed, or a level of customization or functionality you never knew was possible. Suddenly, you have to try it for yourself.

At CES, the exhibition halls are littered with tech that promises to track us, help us save money, time and resources and reflect our own lives back to us in ever-higher definition. They tap into trends of optimization -- tailoring every aspect of our lives to our personal circumstances -- as well as increasing peace of mind in a world where you can now answer your door or play with your pet, even when you’re not home.

Click through the slideshow to discover up-and-coming toys and tools that can enhance your life in subtle ways with potentially big payoffs.

Headphones that adapt to how you hear. 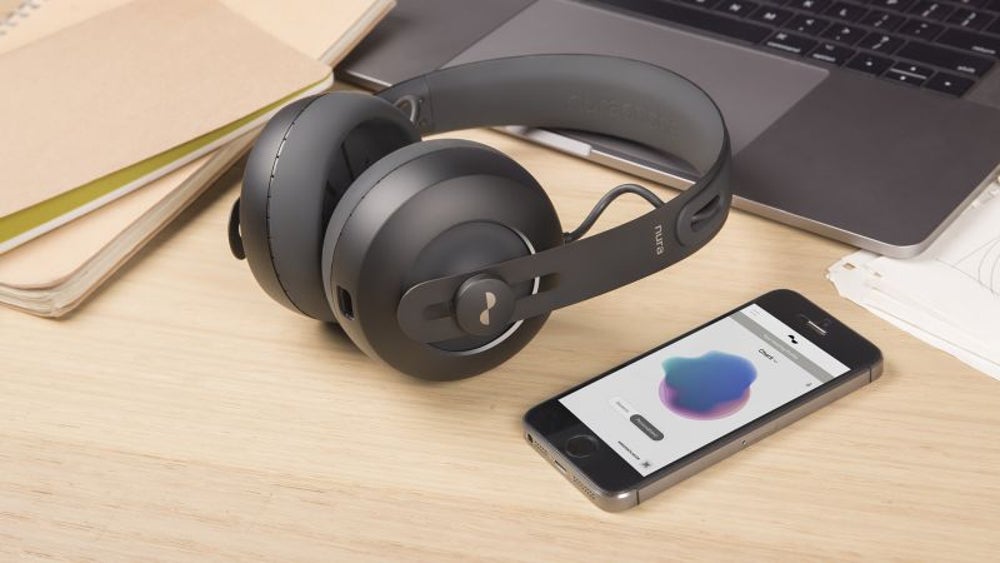 If you didn’t know it, your inner ear emit sounds, called otoacoustic emissions. And from person to person, hearing sensitivity differs between low, mid-range and high tones. The Nuraphone -- a pair headphones created by Melbourne, Australia-based startup Nura -- monitors these emissions in users to measure how users hear in just 60 seconds, then adapts playback accordingly.

A companion app for iOS and Android device generates and stores personal hearing profiles for up to three people (with user-friendly visualizations), and the Nuraphone can differentiate between users when they put on the headphones.

Structurally, it’s a hybrid of earbuds and over-the-ear headphones, a combination Nura has trademarked “inova,” to capture melodic detail and maximize bass. The over-ear component has a tactile driver to send sound waves through the skin, meanwhile keeping ears cool and ventilated for hours (the battery lasts 20 hours on a single charge). Via app, users can adjust the sound based on where they would be standing at a live performance, toggling toward the front row.

In July 2016, Nura raised $1.8 million for the Nuraphone through crowdfunding, and it was the largest in Australian Kickstarter history. In October 2017, the company released a limited stock for purchase, and the next wave will ship this month. The device is among the Best of CES 2018 Innovation Awards honorees. 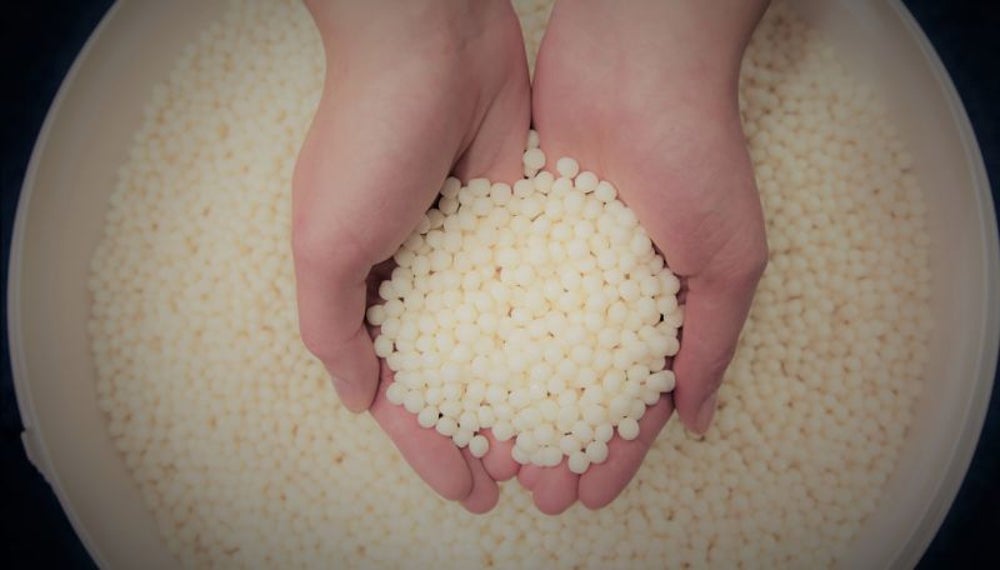 This revolutionary tech has been available to laundromats and hotels for years, and it will soon make its debut with consumers. Instead of requiring a large volume of water, Xeros employs small polymer beads to clean clothes and linens, minimizing water, detergent and electricity use.

The machines have chambers and pumps to store the beads, clean them after heavy use and, most importantly, extract them from loads via tiny holes in the drum.

“The beads gently lift the stains away from the laundry in the wash, like a million tiny hands performing flexing motions on the fabric of each item in the wash,” the company’s website explains. “The molecular structure of the beads allows them to absorb stains, reducing the need for large quantities of detergents.”

The first demos of Xeros machines for the home segment are taking place at CES 2018. The company still has not settled on a price.

“Depending on the model of washing machine we would estimate a consumer to pay less than a 10 percent premium for a washing machine with the technology,” a representative for the company told Entrepreneur. “And that premium will be recovered quickly through the savings of using less water and electricity. 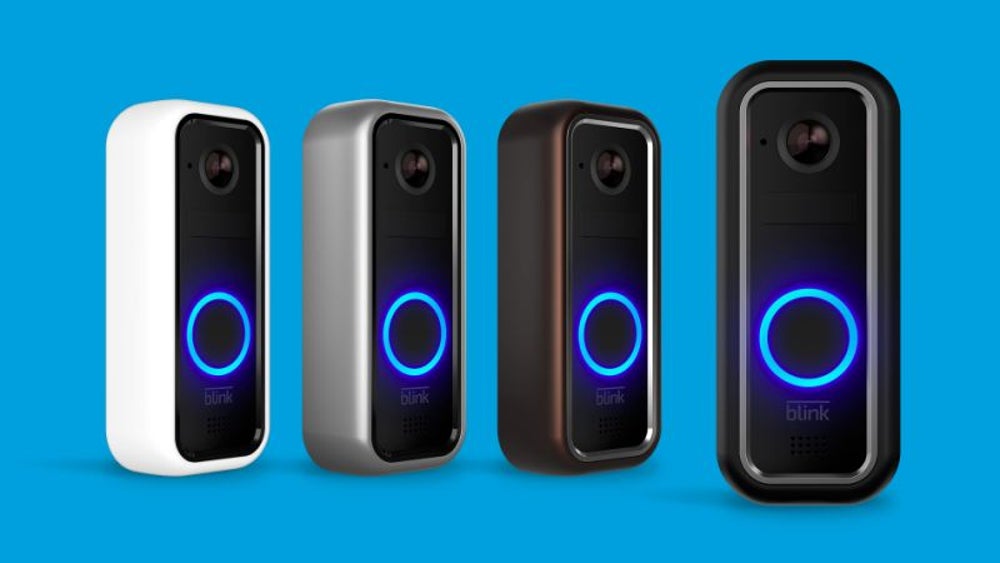 Home security company Blink has unveiled a video doorbell at a competitive price point. The device features motion detection, infrared night vision and HD video, as well as two-way audio. Users will be able to watch an HD video feed of the person who is at the door while speaking with them. When someone rings, users can also answer from their smartphones to make it appear as though they are at home, even when they’re not.

The water-resistant device also boasts the common motion detection feature smart home devices such as Nest provide, sending a video clip of any potential disturbance to a user’s smartphone. Some footage can be stored via cloud.

Users can plug the doorbell into a power source or power it with AA or lithium ion batteries. For consumers who already own a Blink sync module, the video doorbell will sell for just $99. First-time Blink users will pay $129.

A phone that takes two types of selfies. 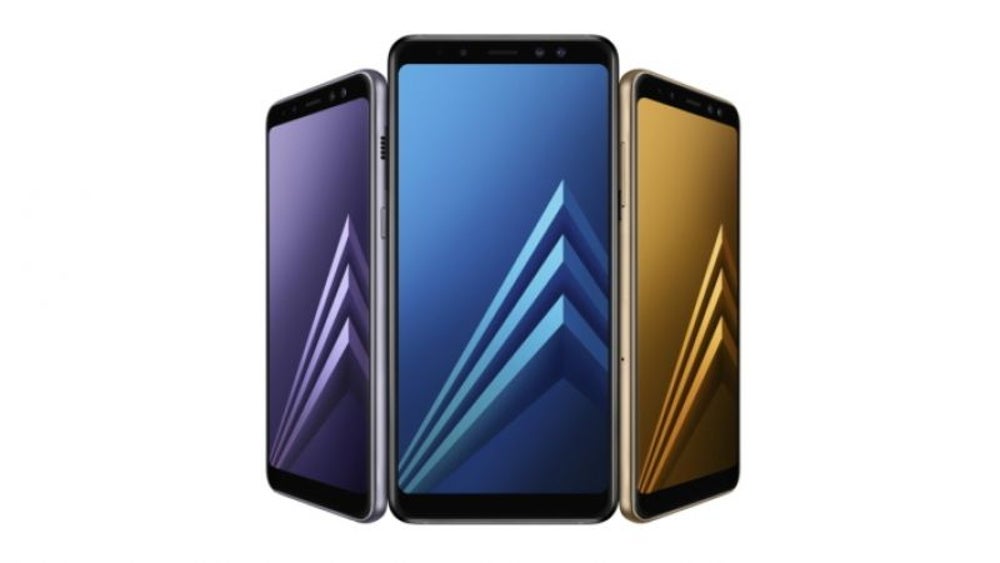 One of the defining features of both devices is a dual front camera, which allows users to take two types of selfies -- close-ups and clear-background portraits. Both have a live focus capability that allows users to adjust the blurriness of the background of their photos either before or after snapping a pic. (There’s also a rear camera for all non-selfies.) Additional features include video stabilization technology and the ability to record hyperlapse (time-lapse) videos.

The devices are compatible with Samsung Gear VR, unlike previous phones in the Samsung A series, as well as Samsung Pay. 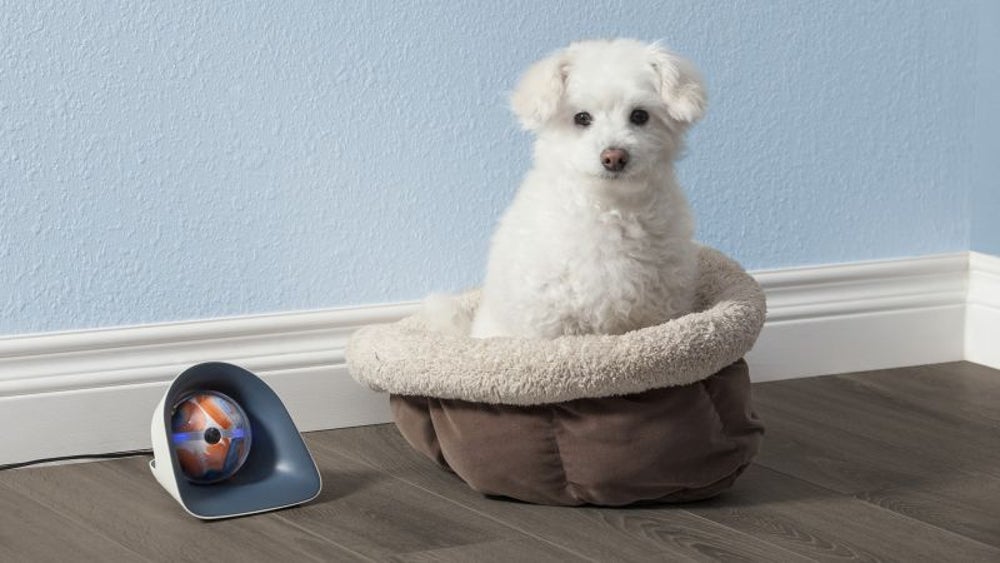 If you’ve always wondered what your cat or dog does when you’re not home, the Pebby smart ball is a fun way to find out.

For $250, you can buy a system that allows you to interact with your dog by remotely controlling the battery-powered ball via app. When the pet barks or nudges the ball, users get app alerts to let them know their furry friend is ready to play. The toy contains a video camera to let you livestream and capture cute moments.

With speakers and a laser toy, playing with Pebby is almost as if you’ve never left home -- and also works on days when you just don’t want to leave the couch. You can record messages to play for your pet, or turn on auto-play when you have to get back to work. To charge the device, simply drive it into the “PebbyKennel” cubby-shaped charging dock, which it rolls and locks into.

Following a Kickstarter campaign that raised 10 times its goal funding amount, Pebby plans to begin shipping the petsitter system this quarter and is working on an activity-tracking smart collar next.

A new kind of gaming system for wannabe DJs. 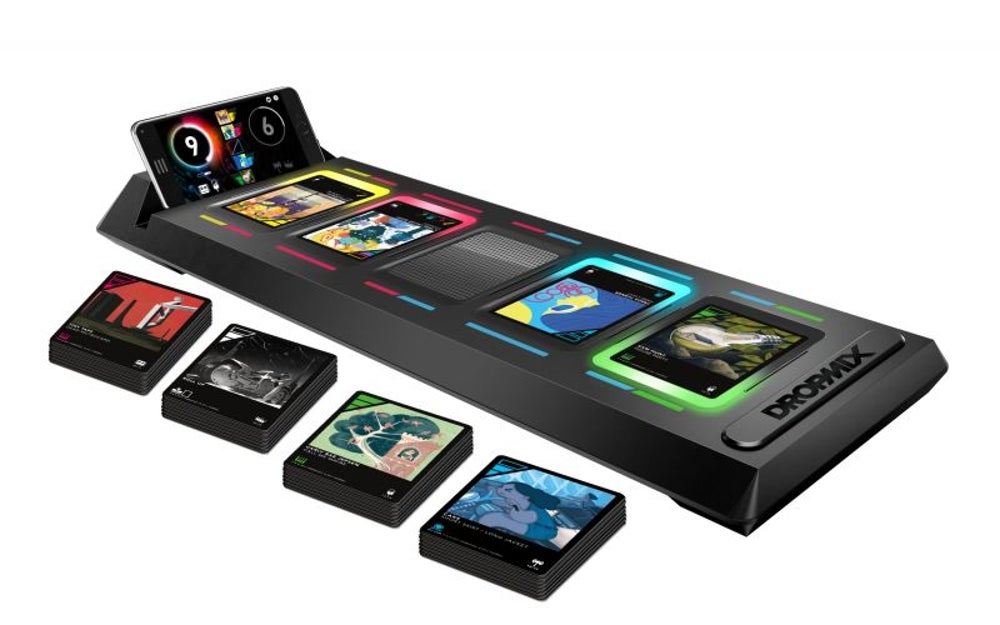 The latest product from Harmonix Music Systems, the video game developer behind Guitar Hero and Rock Band, is all about mixing music. In partnership with Hasbro, the nonconventional card game DropMix, which has generated positive reviews from game critics, combines physical cards with near-field communication (NFC) technology to remix hit songs.

The starter set comes with a board and 60 cards, which contains elements -- bass, beat, loop or vocals -- of songs by Bruno Mars, Imagine Dragons, Sia and more. (Expansion packs contain additional music.) When a player places an NFC-enabled card on a designated “Mix Slot” on the electronic board, the sound begins to play -- up to five cards at once. A free app, which contains software that combines the music, allows players to control the game. Up to four people can play at a time.

The game’s rollout has been slow as stock has been limited, but its presence at CES suggests it’s ready for more aspiring DJs to give it a spin.

A cordless hair dryer for when you blow a fuse. 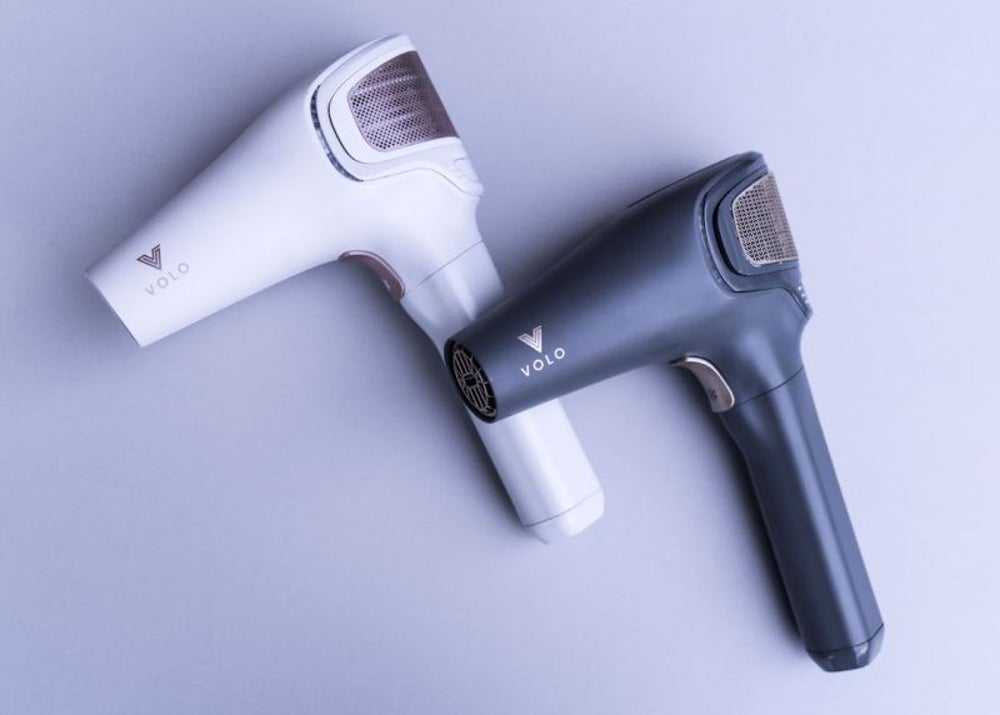 You might not think you need a cordless hair dryer, until the outlet in your bathroom shorts out and you find yourself hunting for the next most convenient spot in your home to dry your tresses.

Volo Beauty’s website is password-protected, but you can see more product shots on the company’s Instagram page.

A phone that can project movies and presentations. 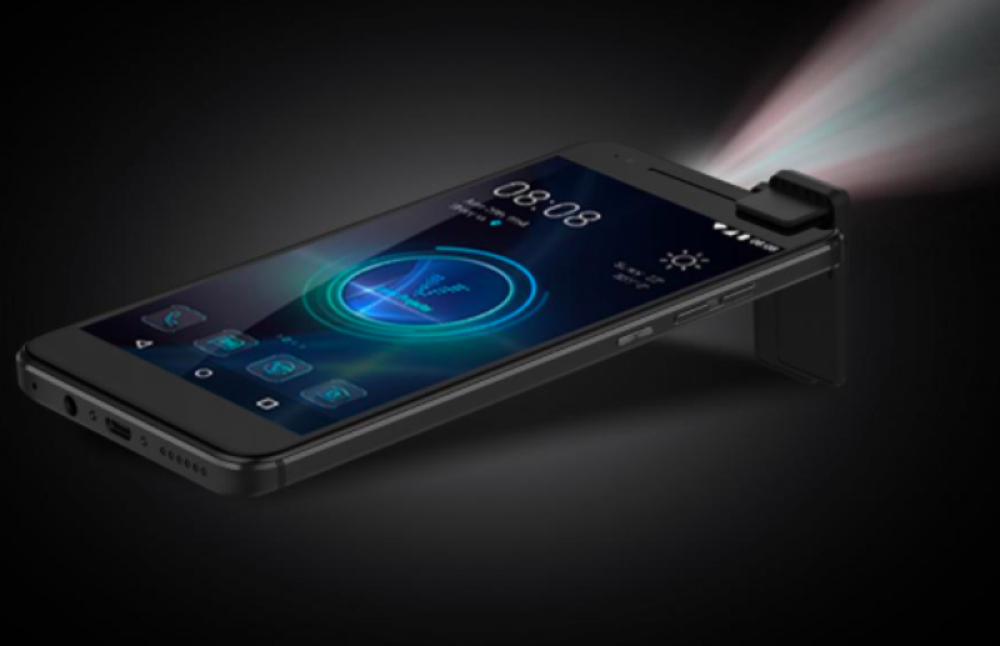 Imagine, the next time you have to give a presentation you didn’t have to lug your laptop and remember the right cables to make it happen -- not to mention deal with the headache of getting all of that tech to cooperate. Or what if you were watching a YouTube video on your phone and wanted to see it a bit larger without transitioning to another device? The Movi from Wireless Mobi Solution, Inc. is a new phone that aims to finally get mobile phone projector category to take off.

The $599 device contains a 50-lumen, 720p laser projector that projects an up to 100-inch image of what’s on the screen for up to four hours of battery life. It’s an Android device that doesn’t look much different from other phones on the market, but it’s still pending approval from Verizon and Sprint, according to PCMag. 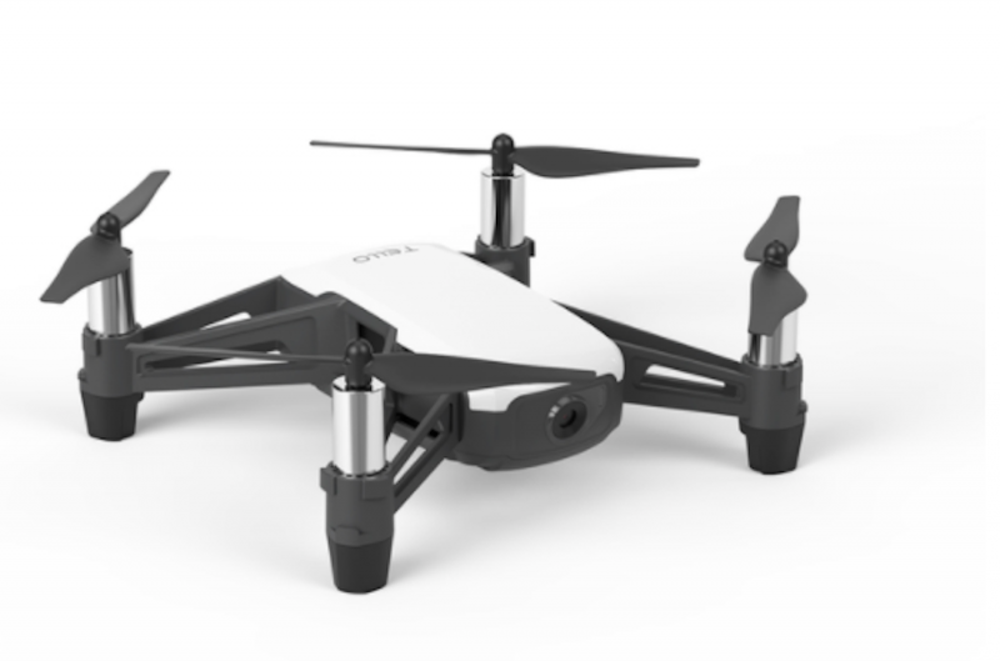 The Tello drone designed by DJI and Ryze and powered by Intel is $400 less expensive than DJI’s previously cheapest model. Users can control it with their phones or a Bluetooth gamepad. While the camera is only 720p, you can’t beat the price. It can stay in the air for 13 minutes, has “Failsafe protection,” which means it will land safely even when its connection is lost and it also teaches users how to code.

A way for kids to play music without stealing their parents’ smartphones. 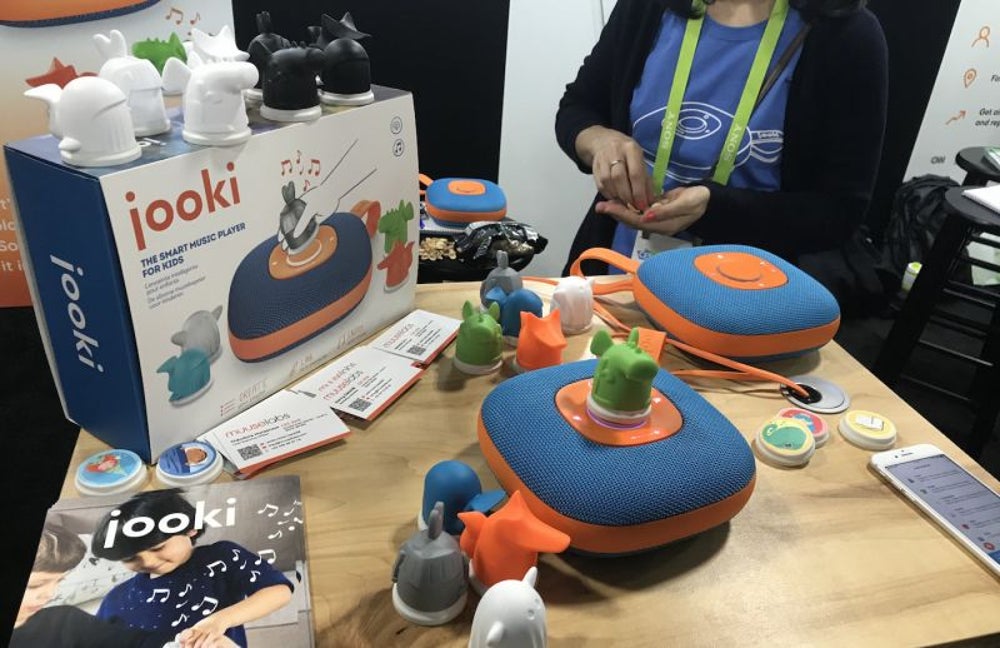 Price: About $242 (converted from euros)
Available to purchase: Now

Jooki from Belgian startup Muuselabs was inspired by CEO Théodore Marescaux’s two young daughters. They were always asking to use his phone to stream their favorite songs. This meant Marescaux would be without his phone, while his daughters would be socially disengaged and glued to the screen. This pattern prompted Marescaux to develop this mini speaker and the little character pawns pictured. Each character plays a different playlist, compiled via app and able to be edited at any time, when placed on top of the device. The music starts when the character is placed on the surface and stops as soon as it’s taken off.