Go Inside The Wing, the Women-Only Coworking Space That Celebrates and Supports Women Creators

As The Wing expands, its founders are learning more about what its members want.
Next Article

The Wing has always been a space for women, in co-founder Audrey Gelman’s mind, but its purpose has evolved over discussions with investors, members and three (going on 10) locations.

Gelman first envisioned a place where women could stop in and freshen up in the middle of a long, busy day in New York City without trekking back to their apartments or lugging all of their beauty products with them. The concept later morphed into a contemporary women’s social club, a gathering place for women with common values. In fall 2016, the first location of The Wing opened its doors in Manhattan’s Flatiron neighborhood. A second location, which opened in SoHo a year later, is three times larger than the first.

Its third location, located in Brooklyn’s Dumbo neighborhood, opened its doors in February 2018, and spaces in Washington, D.C., Los Angeles, San Francisco, London, Seattle, Toronto and Williamsburg, Brooklyn, are in the works.

In addition to a women-only policy and colorful furniture, which have become fixtures of The Wing at its first two locations, the Wing in Dumbo offers more amenities for women seeking a space to work, workout and address basic needs throughout the day.

It now functions as part coworking space, part event space and part social club for women, and members have individual reasons for gravitating to it. Maybe they don’t want to bro out over beer pong, or they seek the benefits of a male-free zone for interpersonal connection. Whatever the draw for a particular member, Wing states that its mission is “to create space for women to advance their pursuits and build community together” -- an open-to-interpretation catch-all that encompasses the three categories above.

Although The Wing famously has a long waiting list, the Brooklyn location is still adding members. “We do rolling membership,” Gelman says. “We don’t want to open at full capacity, because we want to get a sense of how the space is used.” Membership costs $2,350 a year for access to one Wing location and $2,700 for access to all locations.

Click through the slideshow for a tour of The Wing’s new space, which features a vintage photo booth, a podcast recording room and a prime view of the Brooklyn Bridge.

Enter (and exit) through the gift shop 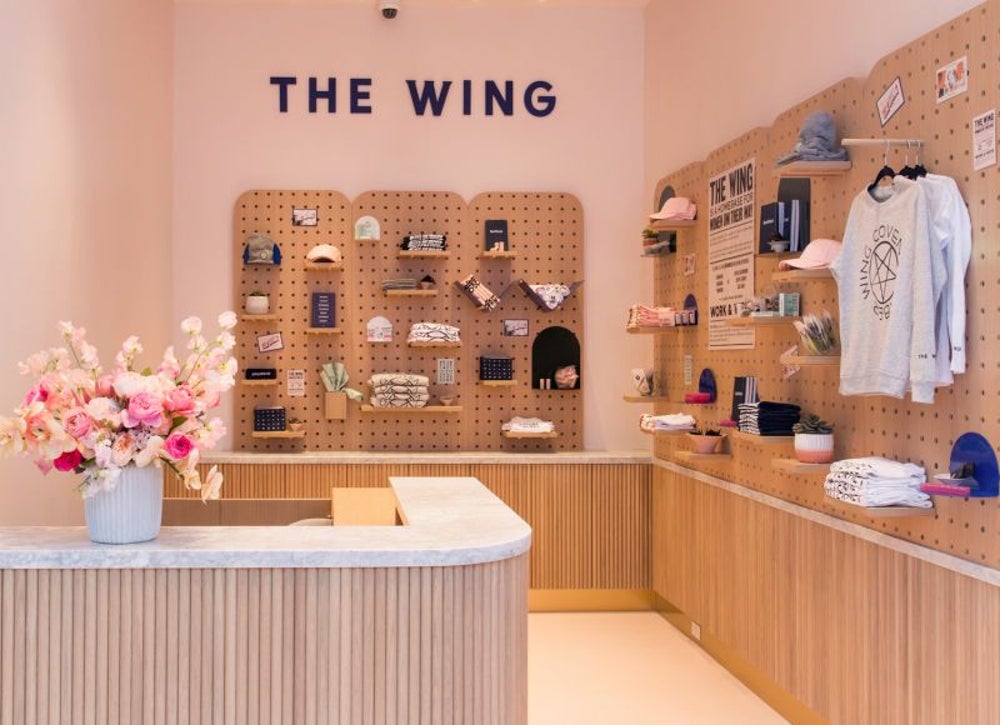 The Brooklyn location is the first to have a small shop, where members and non-members alike can buy Wing merchandise. It’s located at the entrance to the space, before the “members only” threshold, so that non-members can stop in and buy merch as well. This area also doubles as reception, with seating for guests.

One sliver of wall space is reserved for a showcasing art made by Wing members (all available for purchase), through a partnership with female-owned gallery Picture Room.

Art created by members and other women, including Jenny Holzer and Tina Barney, fills the member space. Curator and Wing member Lolita Cros procures the art for the space. 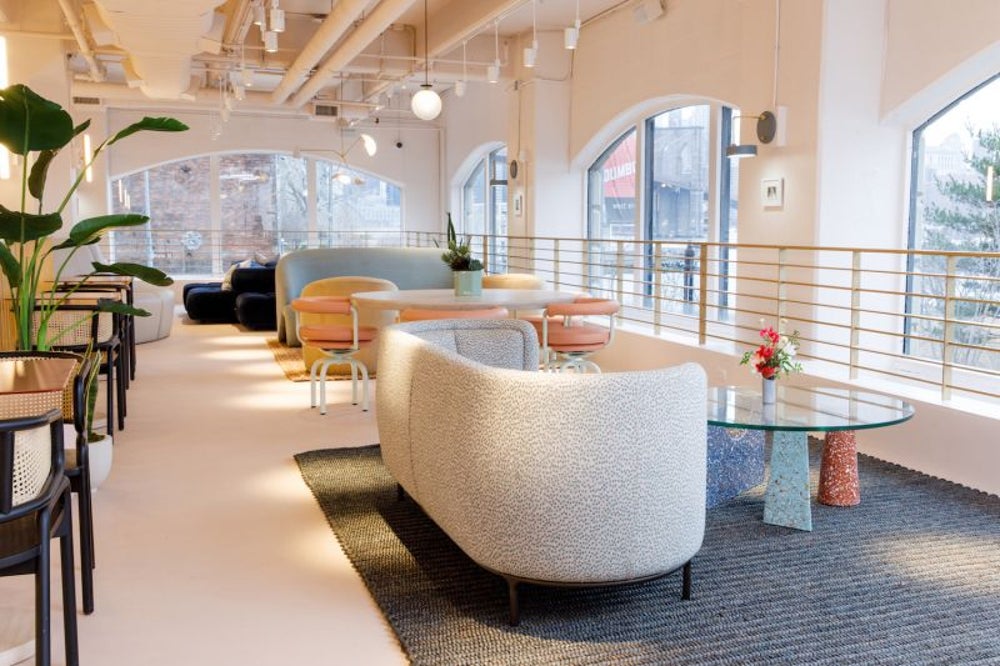 Open seating is common among all Wing locations, but when designing the Brooklyn space, Gelman and co-founder Lauren Kassan realized members needed even more.

“We didn’t know how people were going to use the space with the first location. It was really experimental, and what we found was that women were using it for work.” Gelman says. “So, we wanted to build out as much furnishing and design that we could to make it as easy as possible for women to work here.” That meant providing a variety of table and chair sizes, styles and groupings, down to making sure that there were ample power outlets for keeping laptops charged.

A vision from a dream 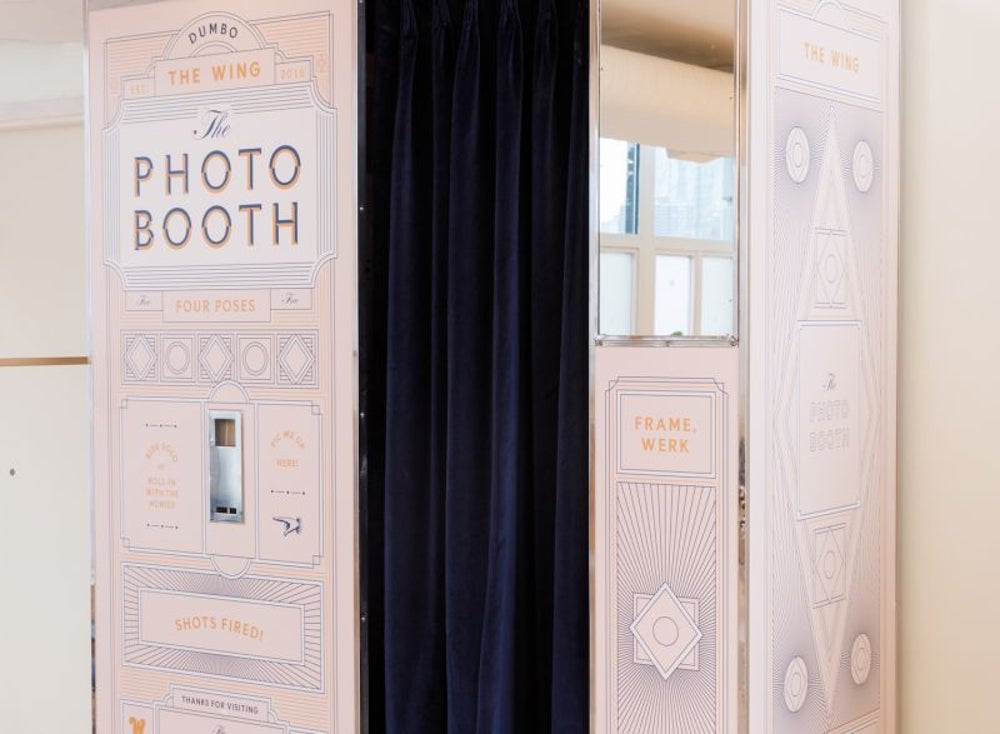 Gelman said she came up with the idea for a photobooth at The Wing’s newest location.

“I woke up in the middle of the night like, “We should do a photo booth!’” Gelman says. The black-and-white, vintage, repurposed photobooth is a fun feature that’s free for members.

Meals prepared by women, for women 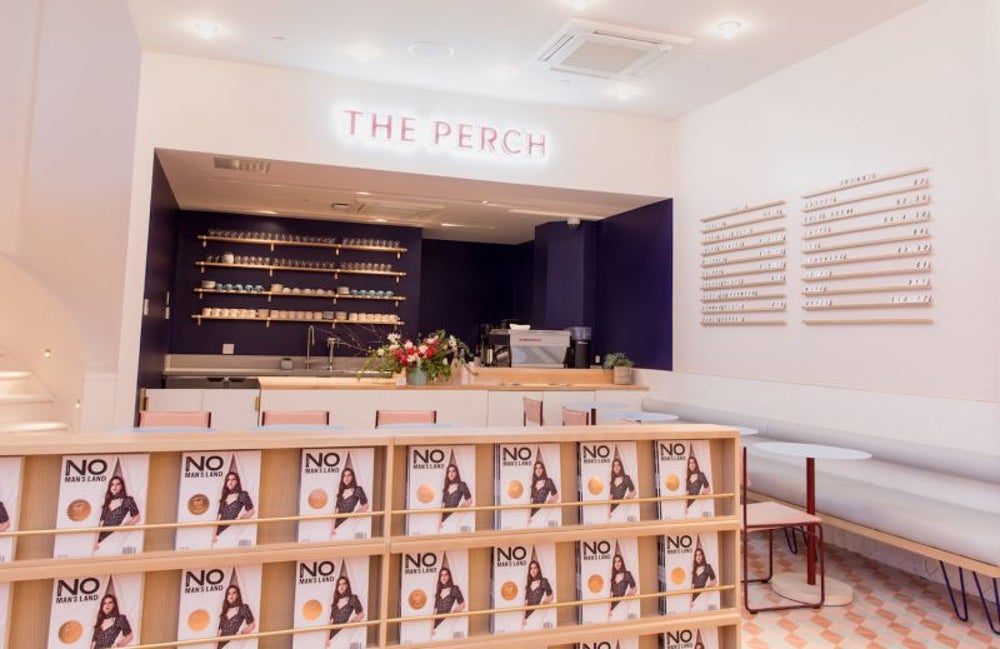 The café locations at all Wing locations are dubbed The Perch, and The Wing partners with women mixologists and culinary experts to help create the menu and prepare the fare.

“When we started The Wing, neither me nor my partner had a food background, and we didn’t even know people would want to eat here,” Gelman says. “That has been one of the most interesting and steepest learning curves for us -- to bring on women in the food world who had the know-how in the kitchen.”

The Perch at the Brooklyn location serves breakfast, lunch and dinner to members all day, though it’s not complimentary. Options include sandwiches, salads, egg dishes and more, all made in-house, as well as baked goods which are brought in from women-owned bakeries daily. Cocktails and wine are available in the evenings. 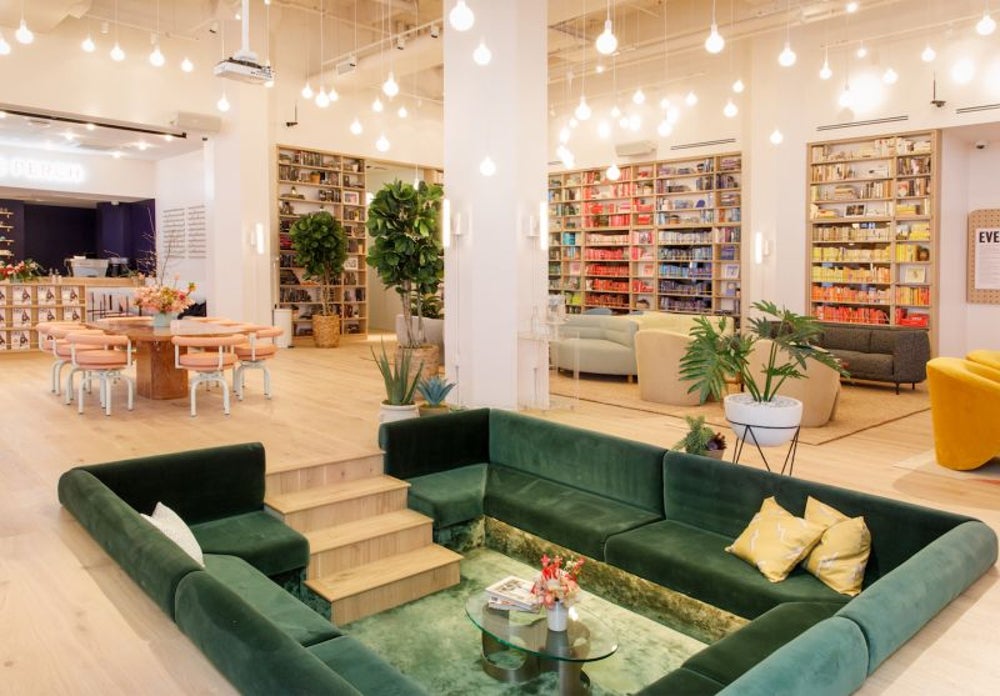 This “conversation pit,” located near the center of the space, allows members to chat a degree removed from the main floor area. It’s also an example of the eclectic furniture the co-founders work with interior designer Chiara de Rege to curate or commission.

“My co-founder and I are really involved with the design process,” Gelman says. “We’re amateurs, obviously, but we’re heavy into Pinterest, so we’re just always finding things that we love and seeing if it’s possible to either work with the designer or create something different.”

Related: I Visited the Bumble Hive to See What All the Buzz Is About

Gelman says that the goal for the design is to be sophisticated, yet playful and fun. When she or Kassan finds a new fabric or texture they like, such as fringe, they try to incorporate it.

“We do get a lot of feedback from members that their mood improves or lifts when they walk in the door,” Gelman says, “and I do think design is a big part of that.” 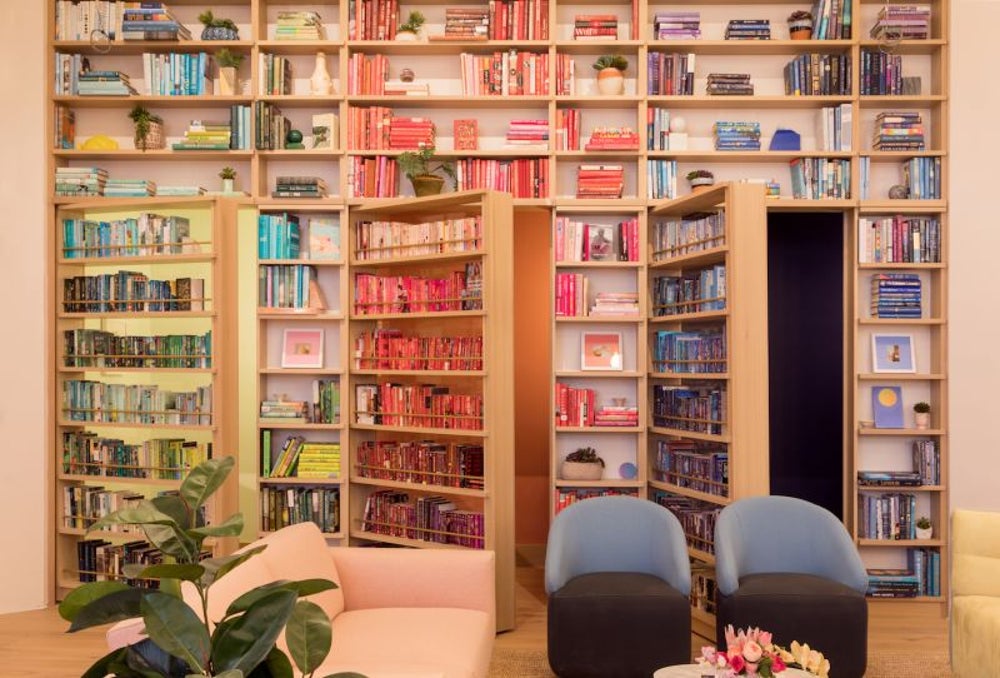 Gelman says that “secret doors” were another design feature she really wanted to incorporate into the new location. The Wing found a creative, efficient use of space with four bookshelf doors that open into phone booths, where members can make private calls away from the open floorplan environment. This was something members requested that the co-founder prioritized in the new space: private space for calls and meetings.

The color gradient of books comprise an all-female lending library with more than 2,000 titles. The Wing partners with New York City’s Strand Book Store (a female-owned business, Gelman notes) to build its libraries. 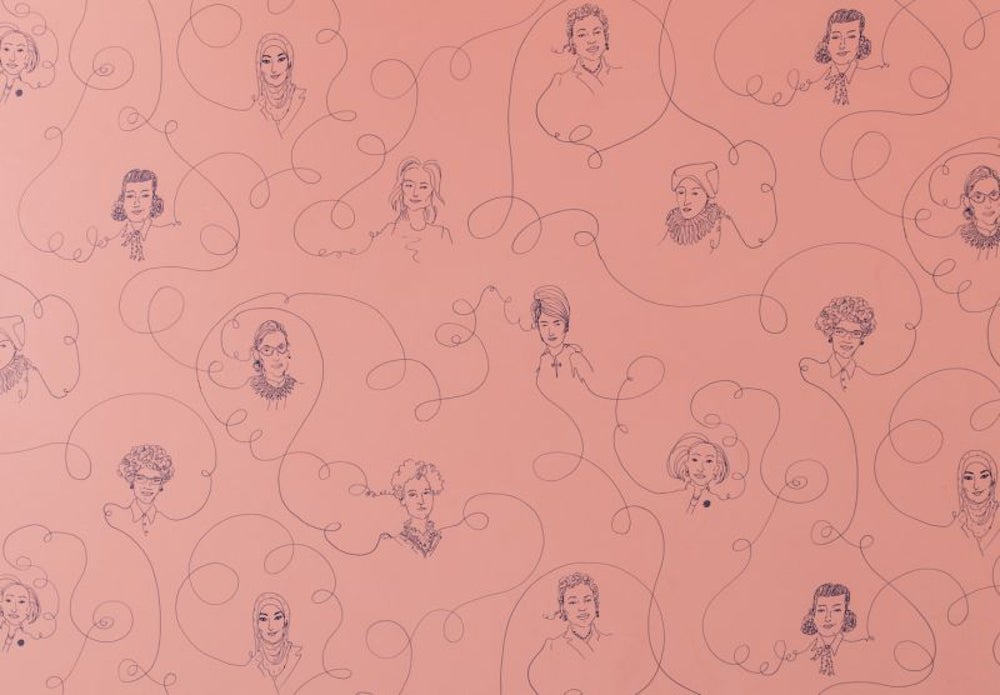 Three conference rooms toward the back of the main floor area fulfill members’ need for meeting space, as well as feature custom wallpaper made by two Wing members, illustrator Joana Avillez and wallpaper designer Payton Turner, whose custom designs are featured at multiple Wing locations.

“Members are really co-creating everything that we’re doing here, from the programming, to the design of the space, to the food, to, the woman who does all of our plant stuff is a member,” Gelman says. “We have this unbelievable rolodex of talented women doing different inspiring things, and so it’s very natural for us to tap into their expertise.”

The wallpaper at the Dumbo location features all prominent Brooklyn women including Linda Sarsour, Ruth Bader Ginsburg and Lady Deborah Moody, the first female landowner in the U.S. 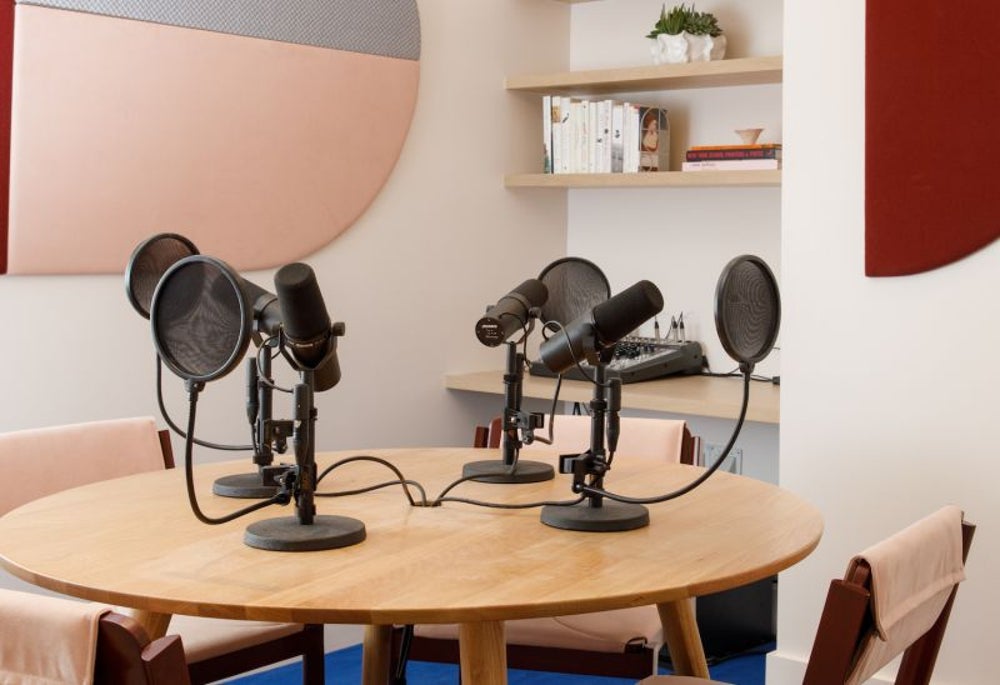 The Brooklyn location is the first Wing to have a podcast room. Members can rent out the soundproof room to record podcasts, do interviews or even practice for auditions, Gelman says. 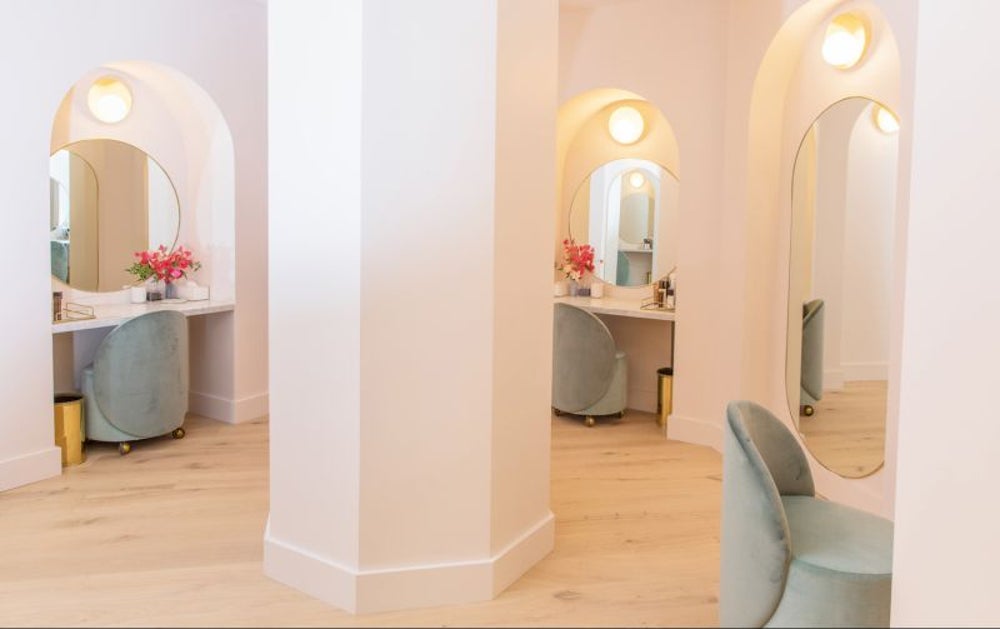 The Wing features beauty rooms like this one at the Dumbo location so its members have all of the beauty tools they need to get ready for events, from hair dryers, curling irons and straighteners to Chanel perfume and Glossier skincare products. 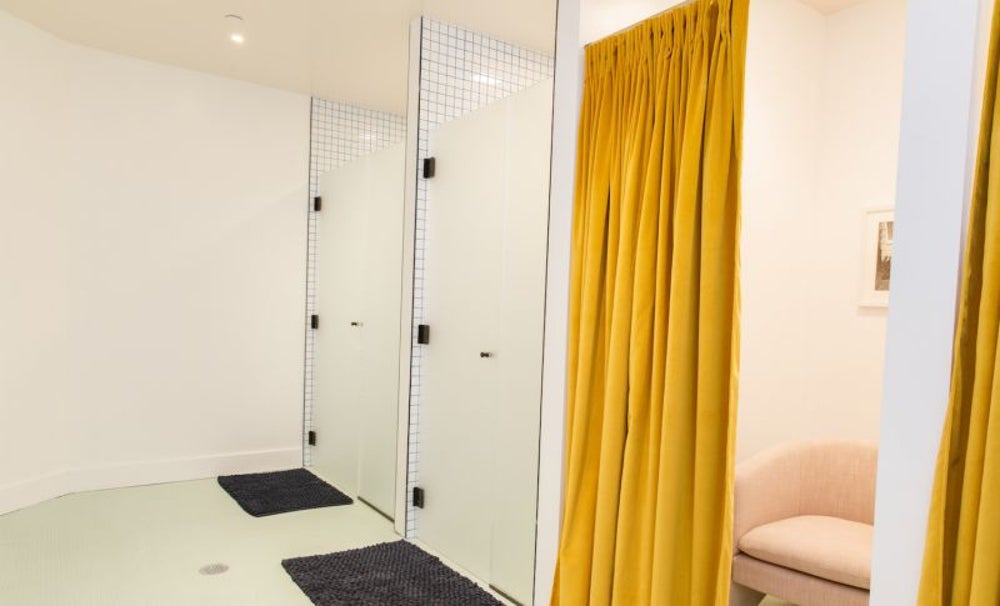 Gelman says Wing members at the Manhattan locations requested space for working out, so the Brooklyn location became the first to feature a wellness room.

The founders of New York-based meditation studio Mndfl are Wing members and conduct workshops in the space, and the cushions in the wellness room are Mndfl-branded. In addition to meditation, members use the wellness room for pilates, yoga and barre classes.

The very back of the space is a locker room and bathroom, with coat closets, lockers, changing rooms (including a garment-steaming machine) and a room equipped with a breast pump for nursing moms.

There’s also a bank of showers, with fresh towels and slippers available for members.

A view from above and within 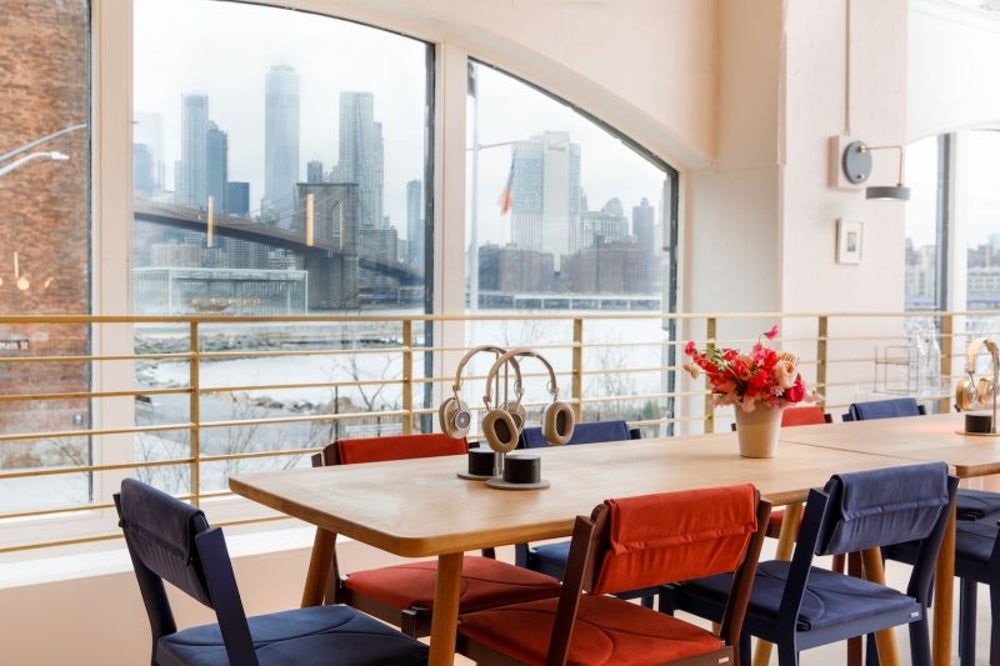 The furnished balcony, which runs along the south and east walls of the space, offers a clear and awe-inspiring view of the East River, Lower Manhattan and the Brooklyn Bridge.

“Traditionally, I think, a lot of the social clubs and coworking spaces that we were aware of all had very dark aesthetics,” Gelman says. “The sort of, classic social club with taxidermy on the wall and brown leather couches, all very masculine and all kind of dark. We wanted to go, just in general, for spaces that felt bright and welcoming.”