HTC's Newest Phone is See-Through, Squeezable and Has Some of the Most Futuristic Features of Any High-End Smartphone

This week, HTC unveiled the the U12+, a high-end Android smartphone aimed at the Samsungs and LGs of the world.

The HTC U12+ is the only flagship phone HTC plans to release this year — there's no standard HTC U12. The "+" was likely added to denote the phone's place among other premiere smartphones like the iPhone 8 Plus and the Google Pixel XL.

Related: Scientists Found a Way to Charge Your Smartphone With Urine

And the HTC U12+ does have many of the features we've now come to expect on a high-end smartphone: a stellar dual camera (on the front and back), a nearly edge-to-edge display, water resistance, fast charging, and no headphone jack. The new device is available for preorder starting Wednesday, and starts at $800.

The HTC U12+ comes in three colors: ceramic black... 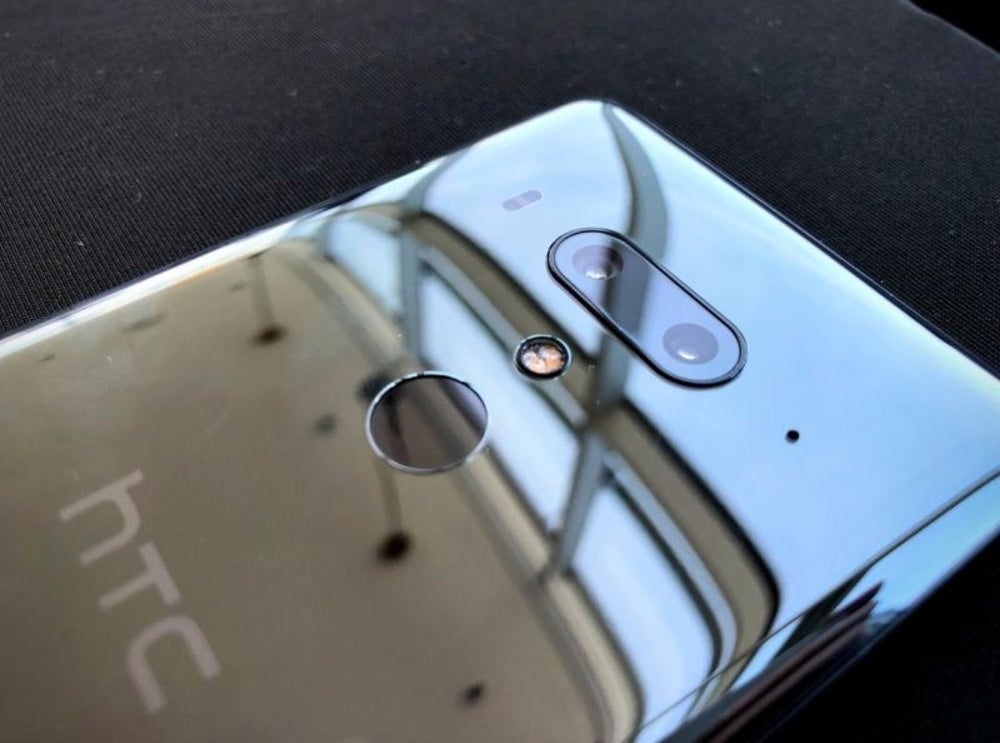 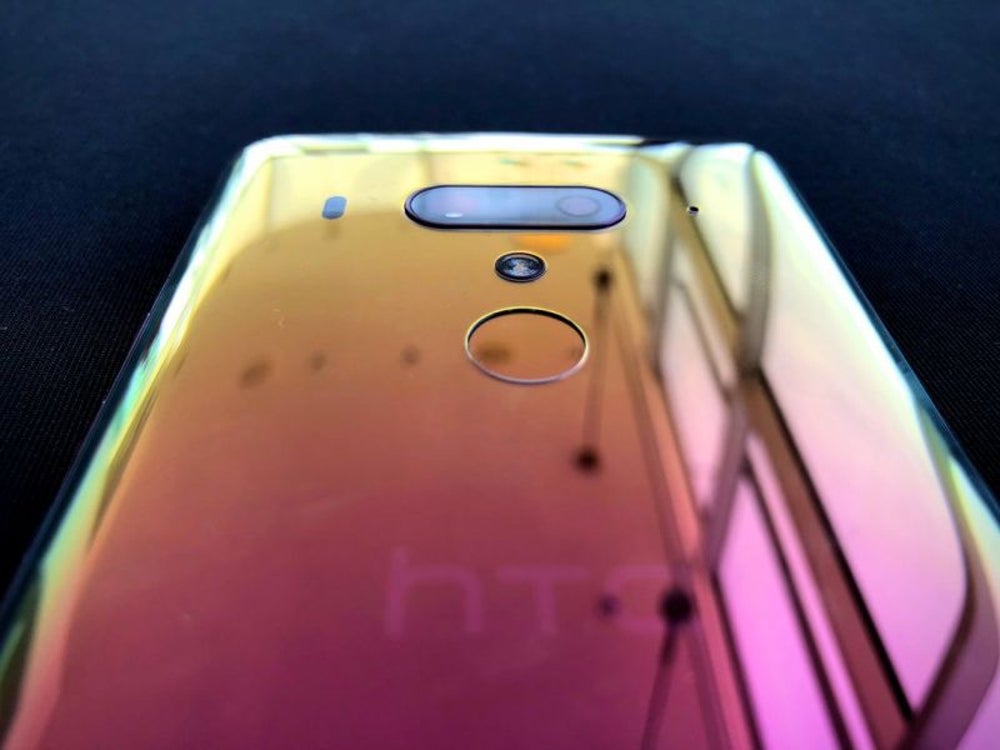 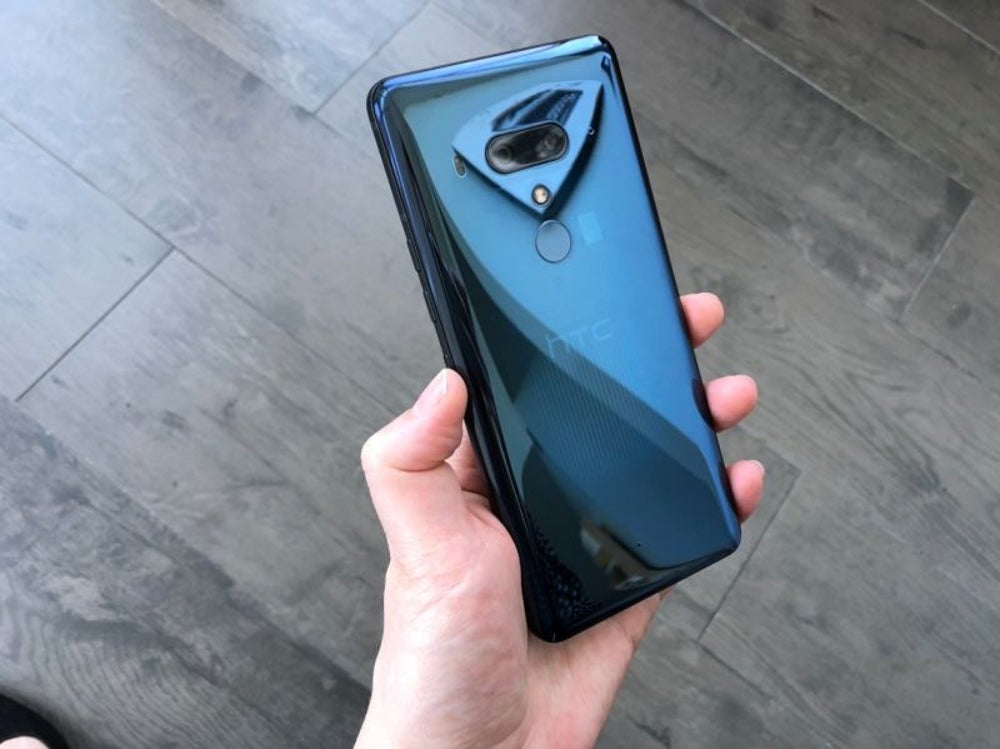 The translucent blue version is — you guessed it — translucent! You can see some of the components through the back of the phone. 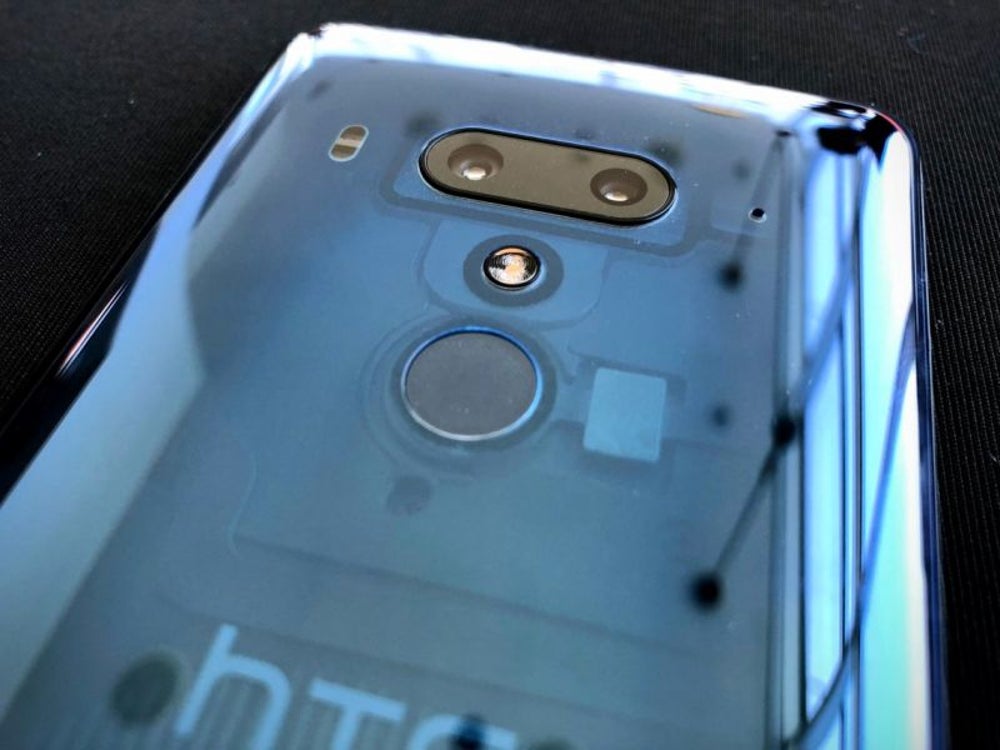 Like last year's model, the HTC U11, the HTC U12+ doesn't have a headphone jack. 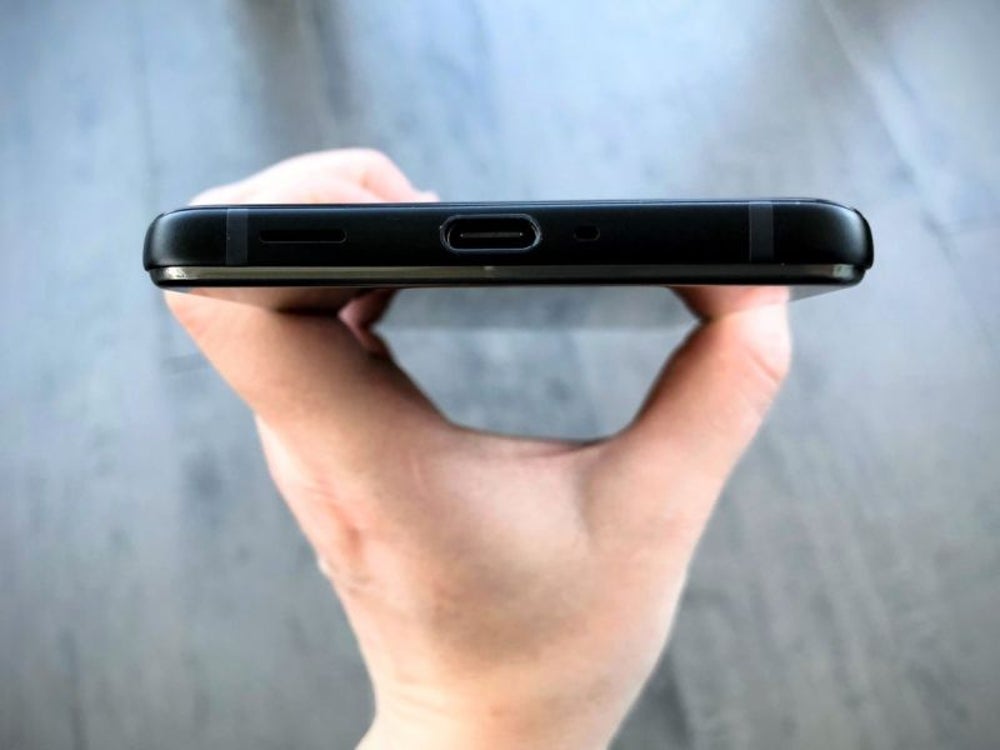 But just like the HTC U11 — and HTC's budget model, the U11 Life — the HTC U12+ will come with a pair of noise-canceling USB-C earbuds. 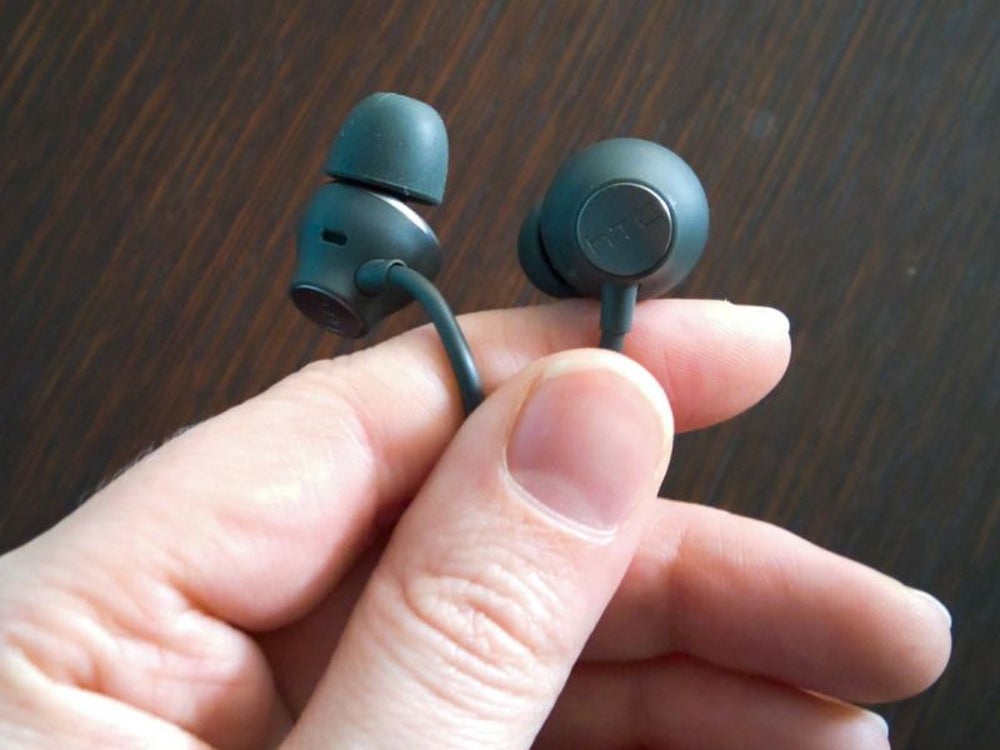 Image credit: Avery Hartmans/Business Insider
I tried the earbuds when testing out the HTC U11 Life and was impressed by how well they worked for a free pair of regular-looking earbuds.

The HTC U12+ has dual rear cameras for portrait-mode photos. 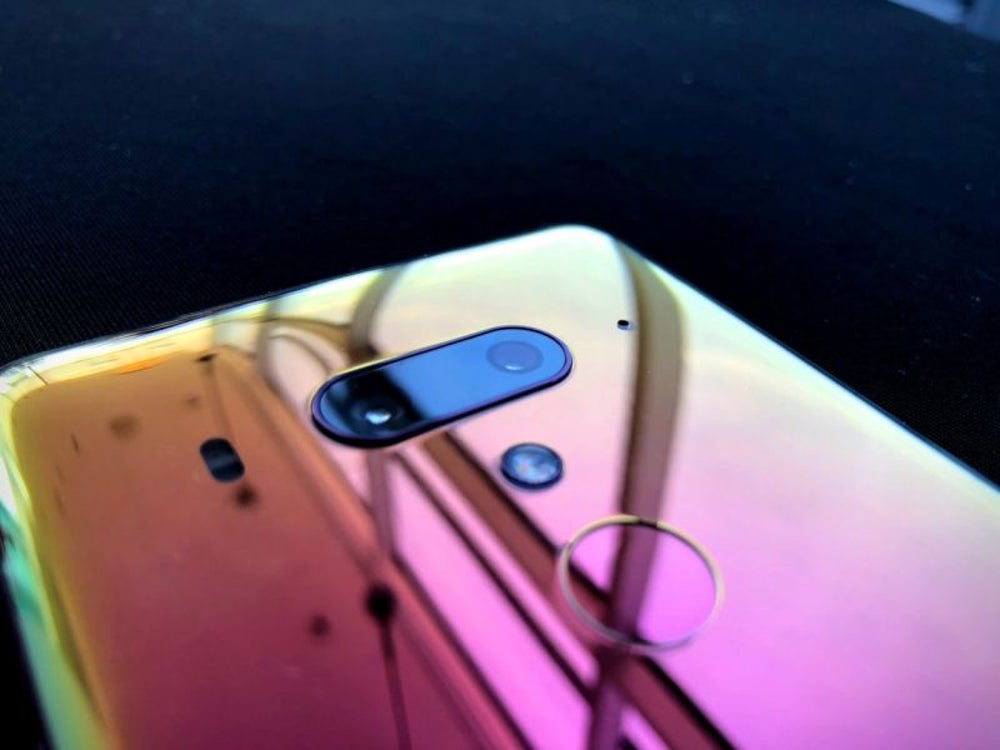 Here are the rear camera specs:

- Bokeh mode in real-time, along with the option to adjust it after the fact

The HTC U12+ also has two front-facing cameras, which means it can take portrait-mode selfies. 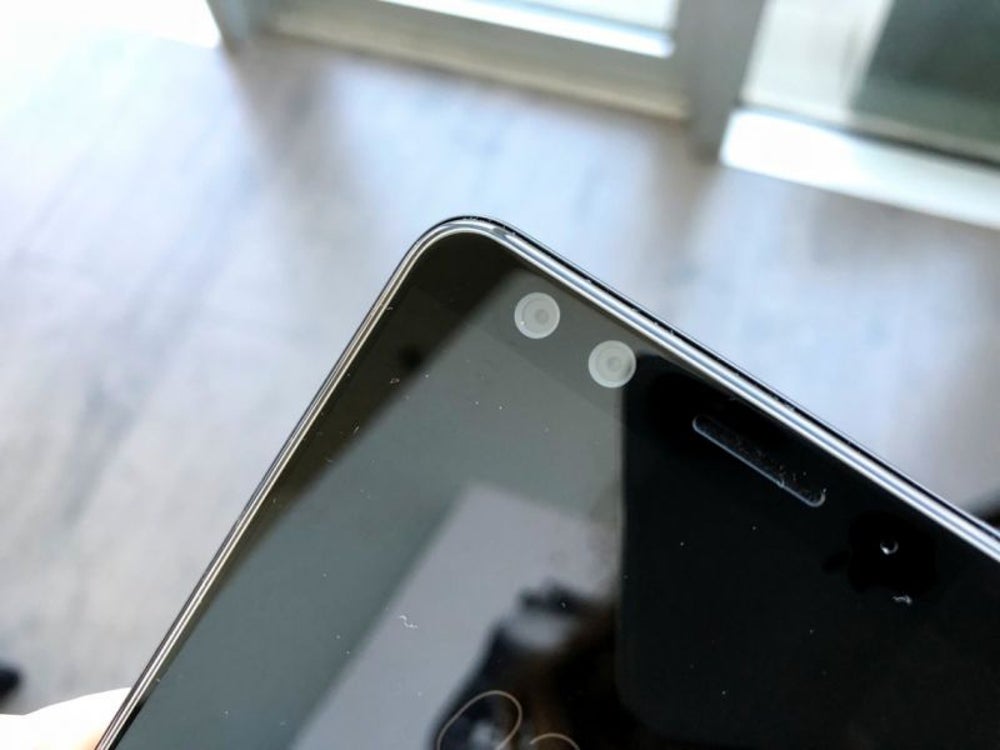 Here are the front camera specs:

- Wide angle with an 84-degree field of view

HTC moved the fingerprint sensor to the back of the phone in order to make the phone's "chin" slimmer and its screen larger... 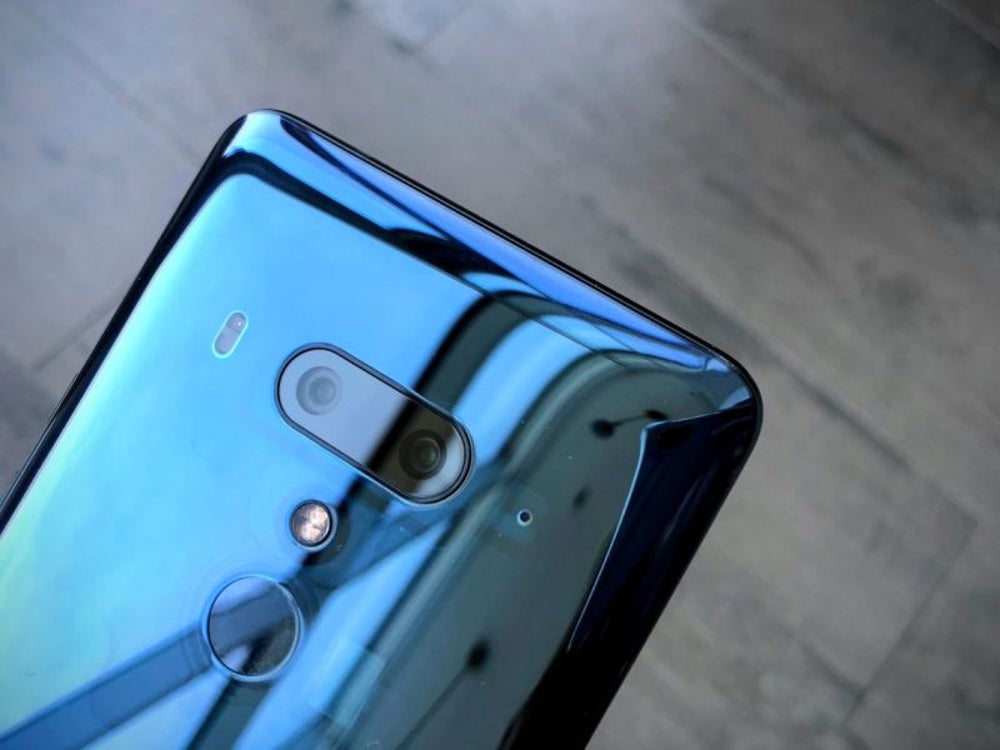 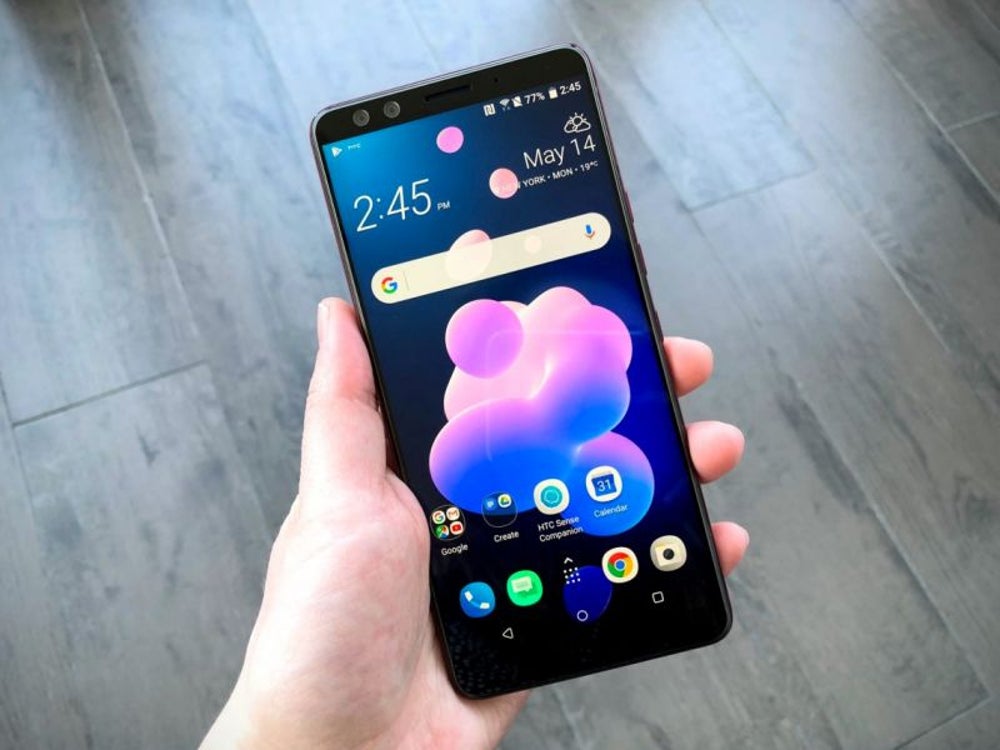 Image credit: Avery Hartmans/Business Insider
The HTC U12+ is also narrower and slightly longer than the HTC U11.

But unlike a lot of other flagship Android phones in 2018, HTC did not include a notch on the screen. 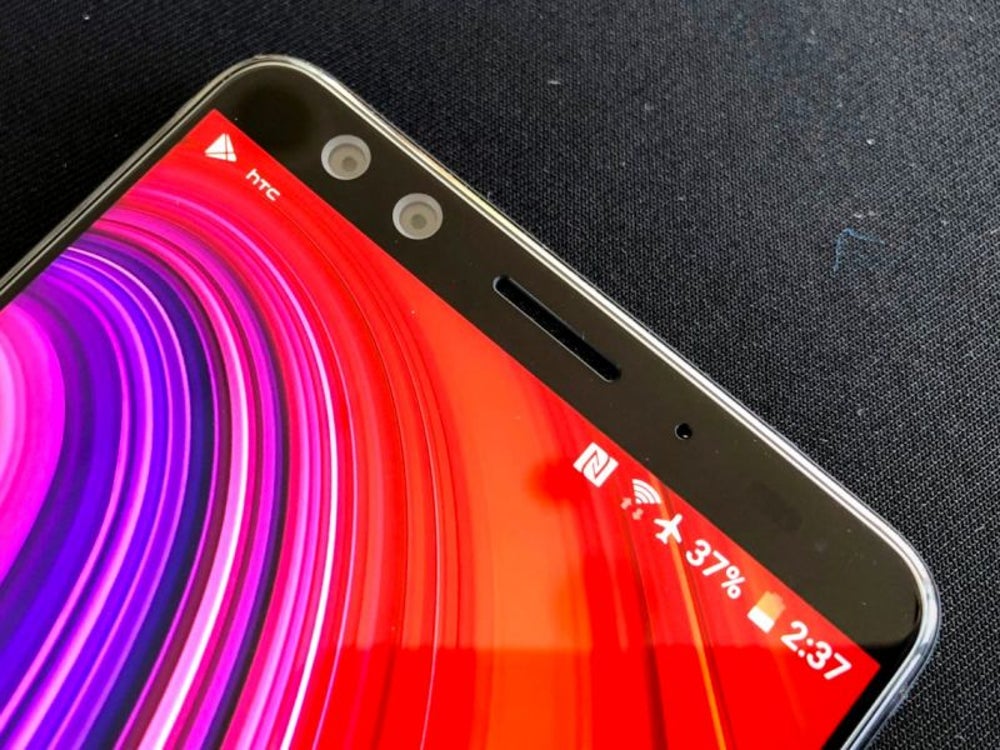 The HTC U12+ will run Android 8.0 Oreo out of the box, but will be upgradeable to Android P when it arrives later this year. 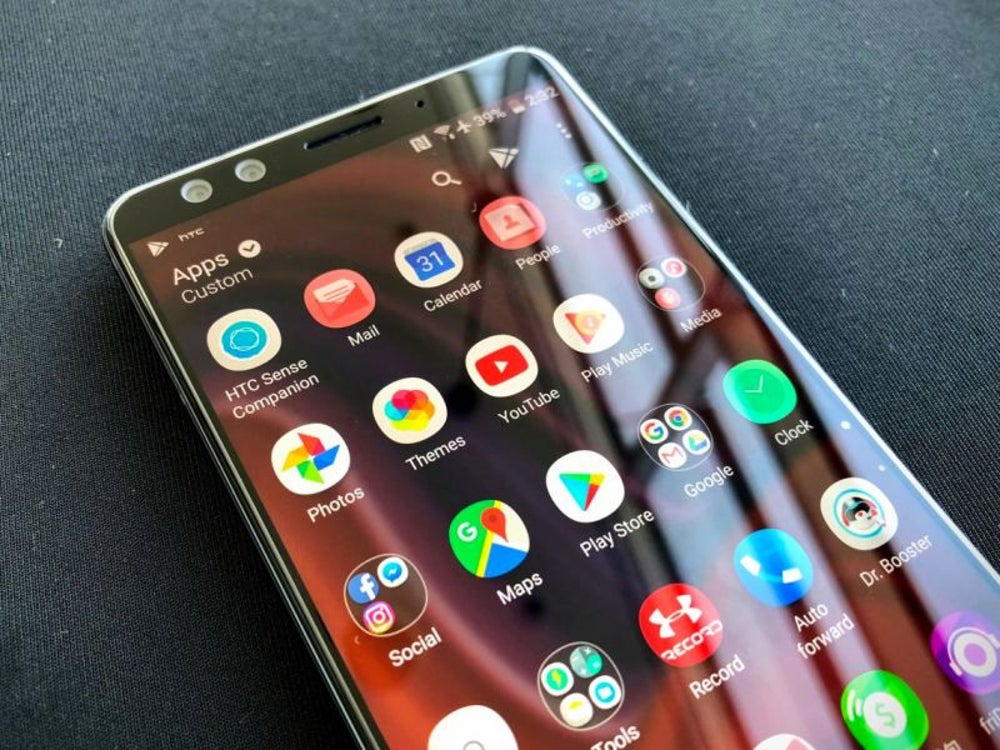 Image credit: Avery Hartmans/Business Insider
The phone comes in two storage options — 64 GB and 128 GB — but there's also the option to add your own microSD card for up to 2 TB of additional storage.

Like the HTC U11, the HTC U12+ has squeezable edges, which HTC calls Edge Sense. 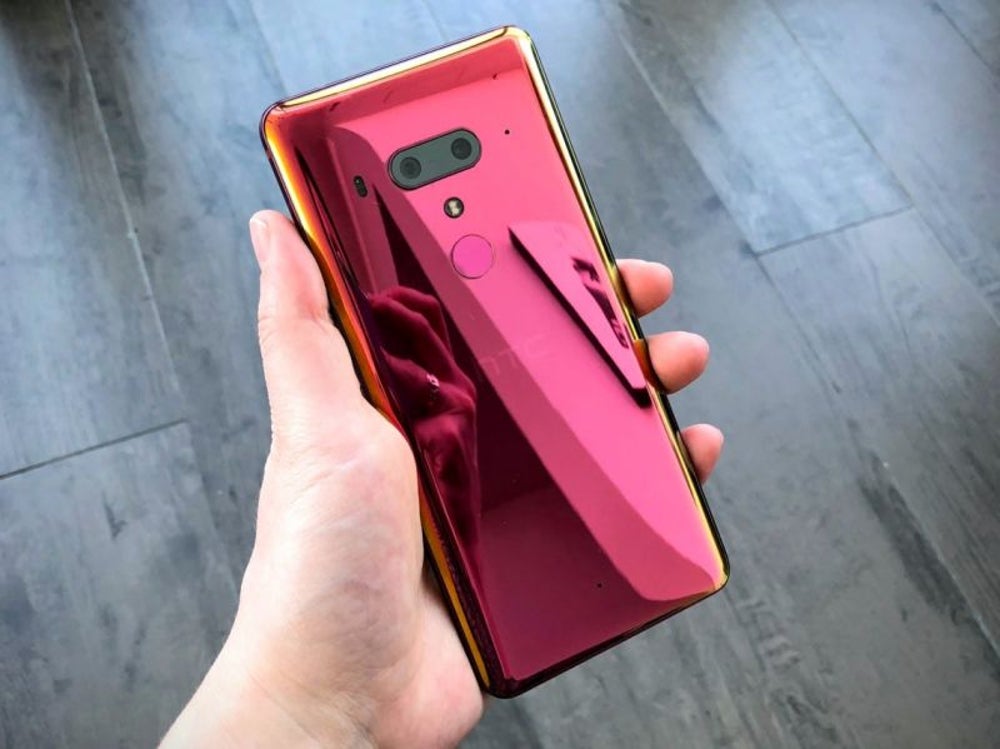 Edge Sense lets you squeeze the phone to bring up apps or controls. The feature is customizable, so you can set it to bring up your camera, or activate Alexa or Google Assistant, which are built in.

The HTC U12+'s side buttons use the same technology as Edge Sense. Rather than physical, click-able buttons, the volume and power buttons are pressure-sensitive. This is challenging to get used to at first — the buttons don't actually press inward — but the feature seems to work pretty well.

HTC says the phone will get about 23 hours of battery life, and is capable of quick charging. 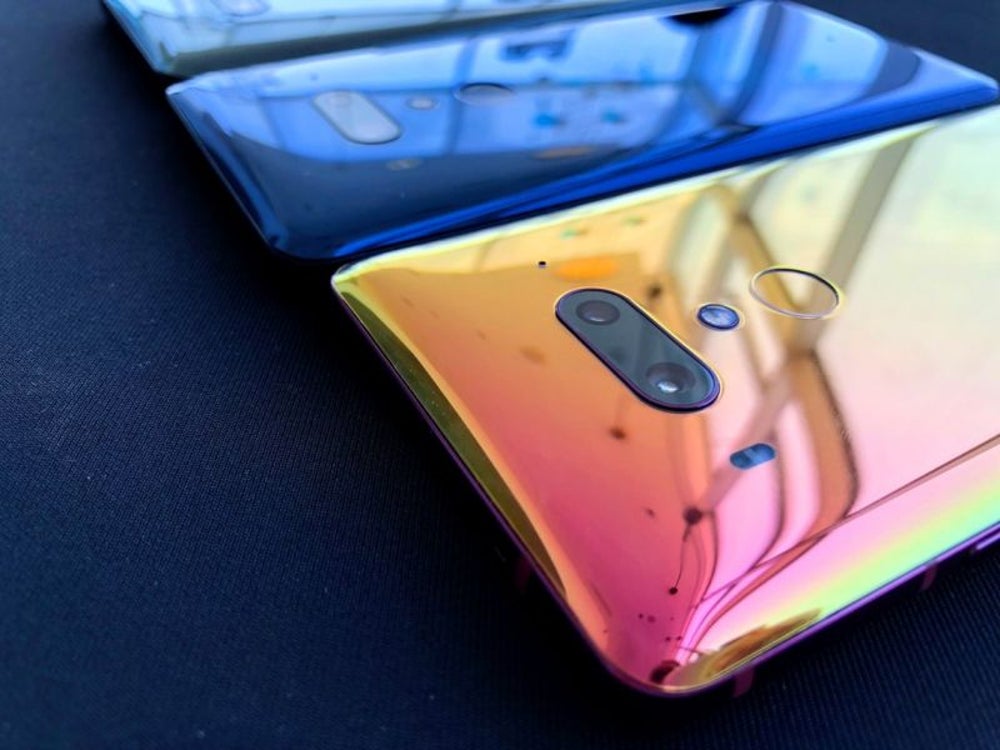 And when it comes to some of the extra features, HTC got creative. 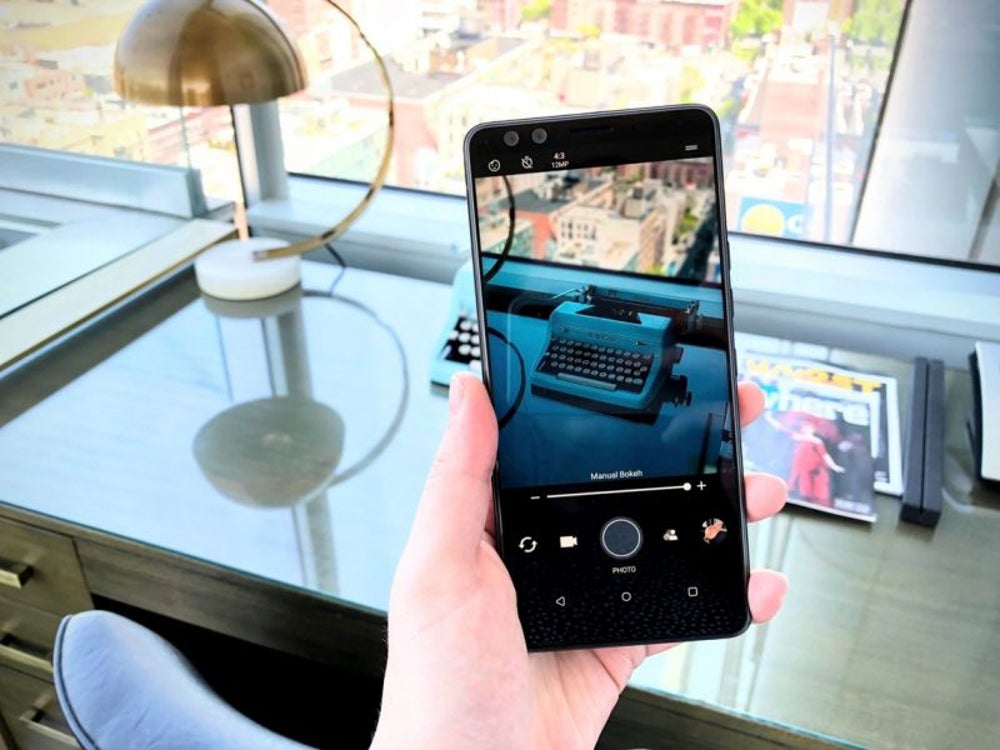 Here are three of the coolest things the HTC U12+ can do:

- HTC added a new feature called Sonic Zoom. When you zoom in while recording video, the microphones will shift directionally in order to better capture the sound.

- When you double tap on the side of the phone — either the left or right side — the display will shift to an adjustable mini screen that makes it easier to use the phone one-handed.

- When you hold onto both sides of the screen, it activates Smart Rotate: the phone will automatically detect which way you're holding the phone and will lock the screen in that position.

The HTC U12+ is available for T-Mobile, AT&T, and Verizon customers, but HTC is only selling the phone on its website and on Amazon to start. 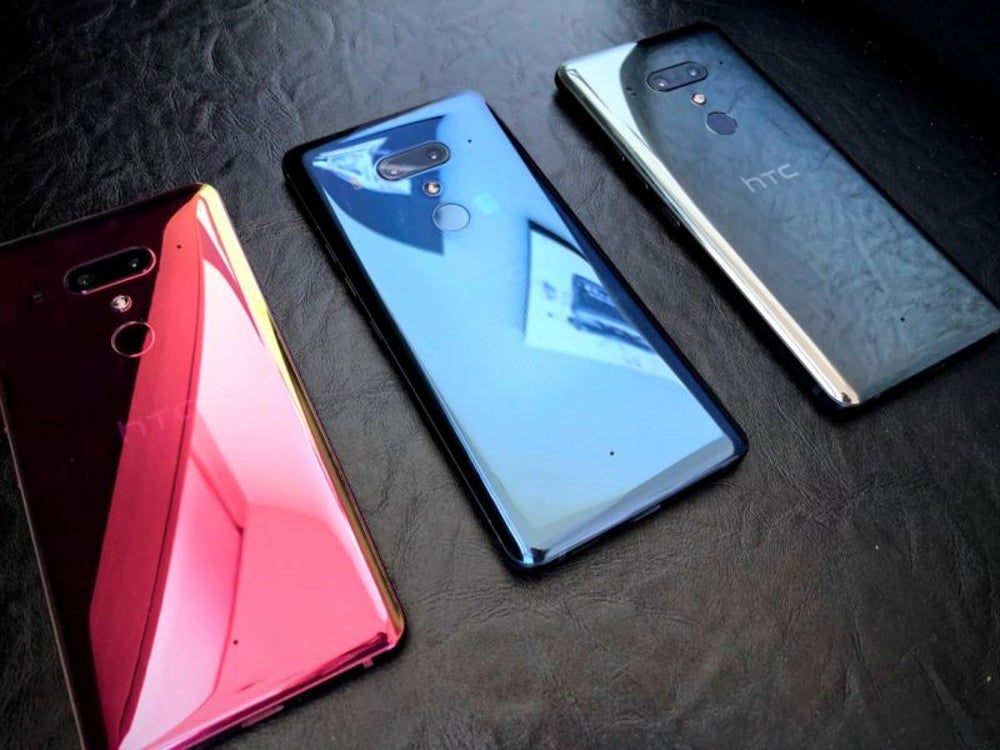 The translucent blue and ceramic black will be available to US customers starting Wednesday, but HTC said the flame-red model likely won't be available until the fall.