Almost Two-Thirds of U.S. Workforce Must Work From Home, Many with Crap Internet

There's about 10 million new or continuing WFH Americans who are trying to function with internet problems or horrible cellular signals. Thankfully, 50 percent of them are regularly disinfecting their phones.

The Coronavirus crisis hasn't done anyone any favors, except maybe to introduce a large number of the (remaining) workforce in the United States to the wonders of remote work. Of people still with jobs, 57.1 percent are apparently are doing them at home, according to a Waveform survey conduced on March 30, 2020—about 2 weeks, give or take, into shelter-at-home orders in many states. 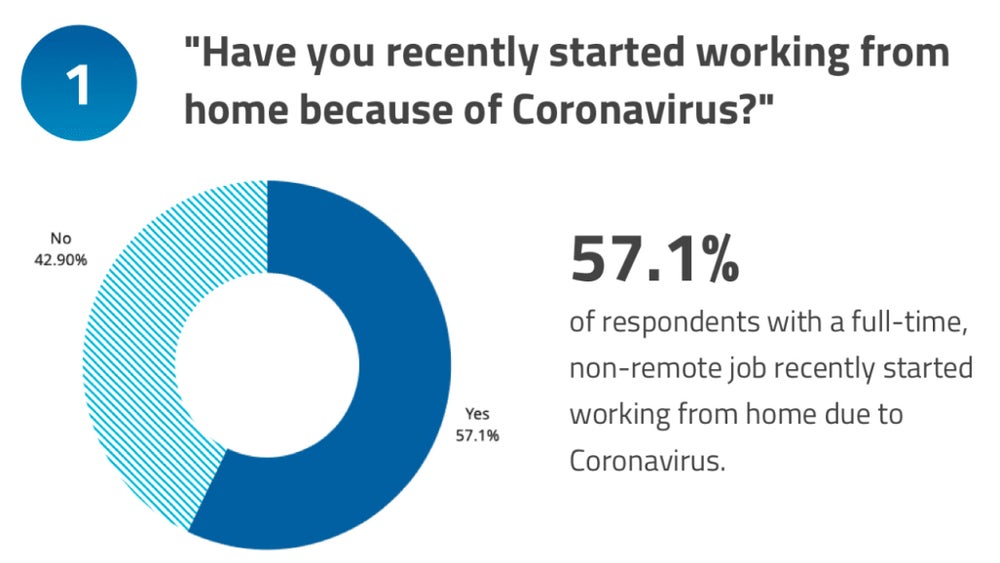 It looks like the younger you are, the better the chance you had to start this WFH phase of your employment.

The big question for employers is probably this: Is more or less work getting accomplished? The honesty of the responses make it look like about one-third think they're doing a little less. But a quarter of people are doing even more. Maybe the most surprising stat from the survey is that only about half of the newly minted telecommuters wish their WFH status was permanent. (A couple of weeks ago, research from Buffer.com indicated that 98 percent of people who had tried working from home pre-COVID-19 wanted that situation to be permanent.) Waveform used to be called RepeaterStore but changed its name to better reflect the changes in the world since its founding. But it still sells repeaters and signal boosters and noticed an uptick in sales. So it asked people how they felt about their cellular signal at home. About 12 percent think their wireless isn't up to snuff, especially because many people want to use that wireless mobile connection to replace their broadband. Why? Because even more of them, 15.5 percent, have major connectivity issues with their ISP on a daily basis. Okay, maybe one more "good" thing to come from the quarantine: Almost 50 percent of respondents say they're cleaning their cellphones either daily or, at the very least, every time they return home from going out.  The 15.8 percent of you who admit to never having disinfected your phone at all, please identify yourselves so we never, ever shake hands.

For more, read the full report over at Waveform.

Elon Musk Rips Into Joe Biden, Canadian Government: 'This Is the Path to Tyranny'

Hiring A CEO? Use These 5 Methods to Find A Leader You Can Trust