Everything You Need to Know About B Corporation Certification

By Michelle Goodman
August 6, 2013
This story appears in the July 2013 issue of Entrepreneur. Subscribe »

When Rubicon Bakery was put on the market, the seller had one condition: Whoever purchased the company would have to uphold its mission of hiring the homeless, people with criminal records and recovering drug addicts. Rubicon Programs, the social service agency that had owned and operated the Richmond, Calif., wholesale bakery for 17 years, brought in Andrew Stoloff, a seasoned restaurateur, to help find such a buyer. But it was not an easy sale: The bakery's equipment was old and inefficient, there was just one reliable commercial customer, and there were no profits.

During the six months Stoloff tried to help Rubicon Programs sell its flailing sweet shop, a funny thing happened. "I fell in love with their social mission," he says. So in November 2009 he bought the bakery himself, agreeing to honor its commitment to employ and train the economically disadvantaged. But putting that promise to paper wasn't easy. Not only did Stoloff and Rubicon Programs struggle to define how the bakery would maintain its social purpose, they also struggled with how to measure whether it had succeeded in doing so.

Ultimately the bakery became a Certified B Corporation, a for-profit business dedicated to social and environmental issues. "That way, there was no arguing about what you can do or what you can't do," Stoloff says. With this third-party certification as a guide, Stoloff was free to rebuild the business as he saw fit, and Rubicon Programs didn't sweat the integrity of its long-standing pledge to its employees and community.

It worked. Stoloff restored Rubicon Bakery to profitability in 2010 without laying off a single worker. Since the change of ownership, he has increased revenue by 400 percent and expanded the staff from 14 part-timers to nearly 100 full-timers, many of them referred by Rubicon Programs and other worker-retraining programs for the at-risk population, including one in a neighboring county jail. In addition to paying workers a living wage, health insurance and vacation, he has instituted an employee loan program.

Walk the Talk
B Corp status--granted by B Lab, a Wayne, Pa., nonprofit--has become a badge of honor for more than 750 socially and environmentally conscious businesses since 2007. Some of the bigger names to nab the certification include Ben & Jerry's, Patagonia, Etsy, Warby Parker and New Belgium Brewing. In some states companies can up the ante by becoming a Benefit Corporation, a legal entity that requires business owners to consider employees, community and the environment when making decisions, rather than being beholden solely to profits.

This isn't just lip service. "The companies that are becoming B Corporations are purpose-driven already," says Dermot Hikisch, B Lab's director of business development. Although many have built-in social missions of helping the poor or creating sustainable goods, there are a number of sustainable lawyers, accountants, marketing agencies and financial-service organizations in the mix. Aside from the obvious feel-good factor, B Corp certification gives social-impact businesses street cred among customers, employees, investors and business partners.

Numerous studies in recent years have shown that consumers prefer to buy from companies that blend social purpose with corporate mission. But when it comes to doing good in the world, it's not always easy to tell which companies are legit. A 2013 survey from Nashville, Tenn., marketing agency Good.Must.Grow. shows that 63 percent of customers don't always trust corporate claims of social responsibility. This is where B Corp status comes in.

Kenai Sports is currently pursuing B Corp certification. Since launching in 2008, the Boston-based startup has turned many tons of trash into the activewear and uniforms it makes for university athletic programs, departments of corrections and other private clients. Customers ask a lot of questions about the clothing the company makes from plastic bottles, cell-phone cases, computer keyboards, food refuse and other garbage it pulls from U.S. landfills. "One of the big problems we have is consumer trust," says Phil Tepfer, founder and CEO. "There's just so much fear in the marketplace of greenwashing."

Tepfer sees B Corp certification as a way to mollify these concerns. "Sustainability is the driving force of our business," he says. "This is verification that we're doing what we say we're doing and not trying to the pull the wool over anyone's eyes."

Increased Impact
To get certified, a business must score 80 out of 200 possible points in a 150-question online survey. Companies are rated on everything from energy efficiency to employee programs to corporate transparency. ("Our expectation is that no company will ever score 200 points," B Lab's Hikisch says.) They also must submit to a phone interview, provide supporting documentation and amend their corporate bylaws to include their commitment to making a positive social and environmental impact. 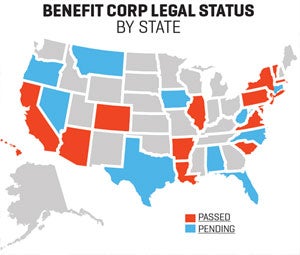 B Corp certification is available to companies with at least six months of revenue. Certification costs $500 to $25,000 annually, depending on company size; reassessment is required every two years. But a company can fill out B Lab's free self-assessment tool anytime to measure its impact on employees, the community and the environment and get details on more than 150 best practices.

Dirk Sampselle, founder and CEO of B Revolution, a Calabasas, Calif., consultancy that advises sustainable businesses, recommends that startups interested in obtaining B Corp status take the online self-assessment as early as possible. He suggests using it as a strategic guide to building a socially conscious business--before solidifying company culture and employment policies and partnering with vendors, suppliers and investors. "You don't want to get six months out and say, 'Oh man, we're not really mission-driven.' You want to plan it from the beginning," Sampselle says.

That's what Greg McEvilly did when he launched Rowlett, Texas-based Kammok in 2011, making "zero end waste" outdoor products such as his signature camping hammock. "I thought it was a great benchmarking tool," he says of the B Corp survey.

The questionnaire opened his eyes to the benefits of working with local suppliers and distributors. "That was one that I hadn't really thought through," says McEvilly, who got his B Corp status late last year. Although Europe and Asia export the high-quality materials his hammocks call for, he's exploring using fabrics and hardware made closer to home and in developing countries that need jobs. He's also getting ideas that will come in handy when he's ready for a salaried staff, such as flexible work programs for caregivers and time off for employees who volunteer in the community. "Instead of just thinking about profitability, it really expands your horizon," he says.

More established businesses also rely on B Lab's self-assessment tool for new ideas. Stoloff has gotten plenty of planet-saving tips for Rubicon Bakery that way. "We're recycling more. We did an energy audit. We retrofitted our lighting. We invested $10,000, and we save $600 a month," he says.

The Right Financing
Another reason to do the B Corp self-assessment early on is to partner with investors who share your goals. "Do not wait until after you've raised capital," Sampselle advises. The time to sell shareholders on your social mission is before you take their money, not after.

Mark Fischer, CEO of Inspire Commerce, concurs. His Boulder, Colo., tech company donates 10 percent of gross revenue to charities, gives employees one of the three board seats and turns away any customer it can't help save money. ("We probably send three merchants away for every merchant we sign up," he says.)

Before he raised $500,000 from friends, family, angels and industry contacts last year, Fischer got his B Corp certification. "Without that, there would be issues," he says. For added measure, he makes mention of the company's B Corp status--and its responsibility to customers, employees, community and shareholders alike--right in its subscription agreement and term sheet.

It may seem like extra effort to ensure that your business stays on mission. But for B Corp devotees, that's the point. "Being a B Corp is not a marketing ploy," Fischer says. "It really is a different way of being in the world."

Signs you're on to the next big thing in green
Hoping to make it big in the sustainable business sector? Here's how three 'treps knew early on that their young green companies were taking off.

1. Your green cred boosts business. Living Room Realty in Portland, Ore., offers 100 percent paperless real-estate transactions; runs its intentionally small office on renewable energy; and goes out of its way to use local, organic, recycled products. Since opening in November 2008, the staff has grown from two to 45, and the branch office has the city's seventh largest market share. "We gave people a real, compelling reason to choose us over the largest firms," says owner Jenelle Isaacson.

2. Your eco practices save clients money. HUMAN Healthy Vending, a Los Angeles franchisor of green machines that sell healthful snacks, made its first sale in 2009 and last year raked in $10 million in revenue. "We make sure that all of our machines consume an average of 30 percent less energy than other vending machines," says co-founder and CEO Sean Kelly. "It helps us win accounts."

3. Your values entice employees. Green Spaces runs eco-conscious co-working facilities and event venues in New York and Colorado. In 2009, a year after the business launched, the torrent of unsolicited e-mail from hopeful employees began. "We get people who write to us every week, offering to intern, help and advise our team," says co-founder Marissa Feinberg. "Employees coming to you--that's a good sign of your corporate philosophy."

4. The industry bigwigs come calling. When Green Spaces first opened its doors, Feinberg was hosting events for free. Today, sustainable business leaders such as Social Venture Network, Rainforest Alliance and Green Festival seek out the company's locations for events, paying $1,000 to $7,000 a pop. "It really shows that you are earning the credibility from people who paved the way," Feinberg says.