So You Think You're a Gamer?

How hardcore gamers are getting schooled by Tom Taylor.

By James Park July 15, 2009
This story appears in the August 2009 issue of Entrepreneur. Subscribe » 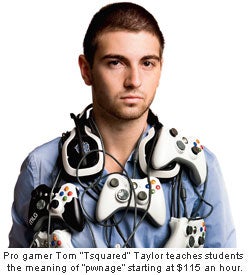 Yes, Taylor's company, Gaming Lessons, sells private video game lessons. Taylor isn't just some noob,* leaving Cheetos prints all over his Xbox in his mom's basement, though. He's a well-known pro gamer who goes by the alias "Tsquared" and makes more than $100,000 a year playing Halo 3 on the Major League Gaming circuit. His site gaming-lessons.com features 16 instructors, all fresh-faced lads who go by names like "Legit" and "Snip3down." Pro-gaming hopefuls can sign up for private lessons with the instructor of their choice, while diehards can attend an entire weekend's worth of lessons at the company's camp sessions, which take place at a house in Orlando, Florida, that has been outfitted to host a gaming bootcamp run by pro-gaming all-stars. At $1,299 per person, the camp isn't cheap, but it's booked solid through the summer and gaining national coverage.

The attention is a big change from when Taylor started the company in 2005. Back then, the lessons were just a way to help the few people who came to him asking for advice. "All of a sudden, I was giving six hours of lessons every day," he says. Considering he plays eight to14 hours a day to keep his own skills sharp, the lessons quickly became too much, and he recruited his fellow pro gamers as instructors. Now, sales reach more than $10,000 per month, and Taylor has big plans for the future: "I'm going to take a vacation," he says.

*Unlike a newb or newbie, who is simply new to a task, noobs know very little about said task and have no desire to learn more. (Source: UrbanDictionary.com)