To Prime and Protect: A Franchisee Works the White House

A Fresh Coat Painters franchisee does an extra tour of duty with a job of national importance.
Next Article
Jason Daley
Magazine Contributor
January 25, 2011 3 min read 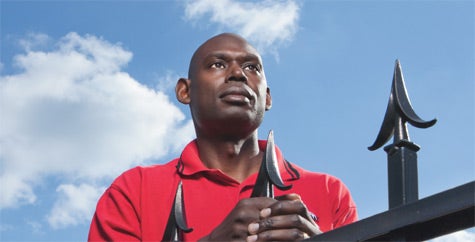 When Russell Johnson retired from the Marines in 2008 after 21 years in the military and two tours of duty in Iraq, he didn't think he would be called upon again to serve his country. But last October, Johnson, a former chief warrant officer who runs a Fresh Coat Painters franchise serving eastern North Carolina, found himself at the gates of the White House, waiting for orders.

This time, those orders were to scrape, prime and paint the 14 vehicle and 20 pedestrian gates around the 18 acres of the White House, and his commander was a National Park Service supervisor.

He and his crew of four painters spent three days per gate, constantly adjusting their schedule to accommodate events and Secret Service concerns. In total, it took more than a month to finish the job--two weeks longer than Johnson had anticipated--but the experience was incredible. "You see the White House on TV," he says, "but seeing it up close and personal every day, seeing the amazing amount of activity that goes on, that was what surprised me."

We asked Johnson some not-so-classified questions while he was washing the paint off his hands.

How did you get the call?
Ralph [Martin], the president of Fresh Coat, said he'd found this job and asked me if I'd be interested. So we worked together to put a bid in last August. A couple of weeks later, I got the call. I advertised for a crew, but I didn't tell them it was for the White House. I just asked them if they were interested in working in Washington, then told them afterward.

Did you see anybody famous?
I didn't see the president, but I saw his motorcade and the vice president's motorcade. And we saw Michelle Obama and her mother from a distance. We got to see Stevie Wonder and some other famous people. The best part was being able to see the wounded warriors and Medal of Honor winners when they were there.

Did you supervise or paint?
When I started my business last summer, I didn't have any knowledge of painting, and Fresh Coat said they hoped I hated painting so I could focus on other aspects of the business and not be in the weeds with a paintbrush. At the White House, though, I did help out. I did everything my guys did. Getting hands-on and learning the ins and outs of the business was great.

How has your military experience influenced the way you run your business?
I had to rely on the leadership and experience I gained in the Marine Corps. In the military, they sometimes put you in a job and you may be the dumbest one in the group, but you're still in charge. You can't say, "I don't know." You have to learn, and realize you're responsible for everything that happens.

Has the White House assignment drummed up new business?
A lot of people are excited about it. In the long run, it will give us instant credibility and give us a story or two. I definitely feel more confident after doing this. That's what I hear so far when I tell people we did the White House gates: Wow, wow, wow.