How to Get Help without Hiring Full-Time Workers 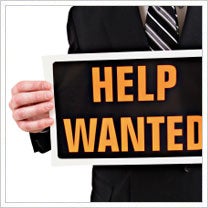 It's been the biggest problem of the recession -- small business owners aren't doing much hiring. That started to turn around last year, but a new Wells Fargo/Gallup Small Business Index poll shows there is now big pent-up demand for workers.

In the study, more than half of entrepreneurs said they hired new workers last year. But more tellingly, among those who added staff, 42 percent reported hiring fewer workers than they really needed.

What does it mean? It appears we're at an inflection point.

Business is picking up as the recession frost finally thaws, but owners are still scared to make a hiring commitment. Asked to list all their reasons for not hiring, nearly 80 percent of respondents said they feared sales wouldn't justify more hiring. Another issue: 70 percent said they've got cash-flow or payroll problems.

Really fascinating note for the unemployed: 62 percent of the owners surveyed said they couldn't find qualified people to fill positions. More than half were worried about healthcare costs, too.

Whatever the worries, deferring hiring can often result in lost revenue because businesses with fewer resources aren't necessarily equipped to capture all of the opportunities available to them. There are, however, ways to bring on help that doesn't cost a bundle. Here are six ideas:

Do you need to add staff? Leave a comment and let us know what obstacles stand in your way.