The Flaming Lips' Wayne Coyne on Reinventing the Music Industry

For this iconoclastic rocker, there are no limits to how music can be packaged, delivered and consumed.
Next Article

The fake blood splattered across the lapels of Wayne Coyne's gray flannel suit says it all: This is not business as usual. Although his body still paces the offices of Warner Bros. Records' Burbank, Calif., headquarters on this late February morning, the mind of Flaming Lips frontman Coyne has long since moved beyond the confines of music industry tradition--away from the CDs, vinyl and digital downloads that have historically defined how labels like Warner Bros. push music to consumers. Coyne's Grammy-winning band will instead issue its next record on a USB flash drive embedded deep within the juicy, sticky-sweet brain cavity of a life-sized skull sculpted entirely from gummy bears. "You have to eat your way through this thing to get to the music," Coyne says, his Oklahoma dust-devil twang crackling with the energy of a man possessed.

The gummy skull is just one of the myriad innovations the Flaming Lips are exploring in 2011, a year the group (which formed in 1983 and also includes bassist Michael Ivins, multi-instrumentalist Steven Drozd and drummer Kliph Scurlock) has dedicated to reinventing how it records, markets and distributes its Technicolor psych-rock odes to life, death and everything in between--and to keeping its ever-expanding audience engaged, satisfied and surprised. The band has vowed to release new music as quickly as it is recorded, abandoning conventional formats. Cereal boxes, toys, gadgets--if it's a viable vessel for music, the Flaming Lips will throw it against the wall to see if it sticks.

"In hindsight, the industry was lucky people were ever willing to buy music," Coyne says. "What we're doing now is more realistic. It means listeners can be more a part of the experience. Music is about more than just listening to it."

Free Falling
Innovation is why the Flaming Lips have outlasted virtually all of their contemporaries, and now it's their best weapon for outlasting the traditional recording artist model. The music business is still just that--a business--and one marked by a steep decline in revenues. Whether you're the Flaming Lips or even a megaseller like tween heartthrob Justin Bieber, the industry is in a state of extraordinary flux.

The International Federation of the Phonographic Industry, a trade group for the recording sector, reports that sales of digital music increased by only 6 percent worldwide in 2010, as the overall music market fell 9 percent. In each of the past two years, the rate of increase in digital revenue has roughly halved. Assuming that continues, digital sales will fail to reach $5 billion in 2011--a number that falls billions shy of the total needed to counteract for ongoing declines in CD sales.

For the Flaming Lips and like-minded contrarian musicians, that makes it necessary to assert far greater control over how music is sold and distributed--and to explore new channels. The Flaming Lips plan to release new music as it's recorded in 2011, making it available to fans almost as quickly as it earns the band's in-studio seal of approval.

"We want there to always be a constant flow of new things we're singing about and new sounds," Coyne explains. "The idea of waiting two years to put out new music--why? Here is music that came to us last week--we recorded it, and now you're holding it."

Experimental Weirdos
Coyne is the mad-scientist maestro of modern rock 'n' roll. Whether it's fake blood (a longtime signature of the Flaming Lips' famously bacchanalian live shows) or the real blood Coyne mixes into the silk-screened concert posters he creates, he isn't afraid to get messy for the sake of his craft. 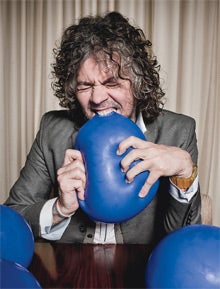 The Flaming Lips have always existed on the margins of the music business. Their biggest radio hit, 1993's "She Don't Use Jelly," didn't even crack the Billboard Top 40 singles chart, and the 2002 album Yoshimi Battles the Pink Robots is their lone full-length record to sell more than 500,000 copies in the U.S. Yet here they are, still on a major label and producing daring music at a stage of their career when most other acts start parading out their tired fan favorites on the county fair circuit.

Credit the band's resiliency to its ability to continually reinvent. You never know where they might pop up next--it could be a marketing partnership (Mitsubishi, Dell and Kraft have all used the band's music in their ad campaigns) or in the halls of Congress (in 2009, legislators voted the track "Do You Realize??" as Oklahoma's official state rock song).

"After a while, we started not to worry about everything we do," says the scruffily handsome Coyne, who turned 50 in mid-January. "We discovered little by little that the people who do the coolest things are the people who don't give a f***. We always take the measurement of whether we would regret doing something more than not doing it. The worst thing that can happen is that you'll be embarrassed. We've never felt that stuff cheapened the music."

Audience Appreciation
Not everyone agrees with the anything-goes ethos of the Flaming Lips. "Why do you need to sell your songs for some lame car commercial?" says longtime Chicago Sun-Times music critic and Columbia College lecturer Jim DeRogatis, who wrote the 2006 book Staring at Sound: The True Story of Oklahoma's Fabulous Flaming Lips. "The Flaming Lips have done some things only for the money that have worked on a wickedly subversive level. But as someone who's been a fan since the early '80s, I would like them to put down the silliness and pick up their guitars again."

For the most part, though, the band's ventures into the pop culture mainstream have expanded their fan base, not alienated it. Few acts have enhanced their brand so effectively. The Flaming Lips' extracurricular projects blur art and commerce with uncommon skill, extending their creative vision and generating revenue without compromising their craft or fleecing die-hard listeners. 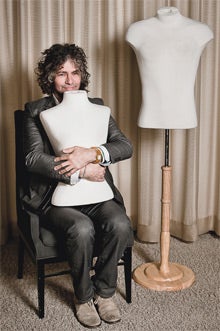 But Coyne resists the interpretation that he is as much entrepreneur as entertainer. "When I think of entrepreneurs, I think of that guy who runs Virgin [Richard Branson]. He's a risk-taker--he's charming and powerful," he says. "We're just a humble, experimental, weirdo group from Oklahoma, and I'm just a desperate guy doing whatever I can get away with."

Coyne may resist the notion that entrepreneurialism guides his path, but the reality is that the Flaming Lips have remained so successful for so long by adhering to the oldest rule in the business handbook: Keep the customers satisfied.

"Everything we do tells the audience 'We love you,'" Coyne says. "The money that listeners spend goes back into us making all these things. You could easily say that money feeds all of this exploding, uncertain creativity. Without our audience, I wouldn't have the life I have. And I try to take full advantage every day to do something with it."

Lessons in Reinvention
From TV appearances to art and film projects to unique ways of packaging and releasing their music, the Flaming Lips have always seized every opportunity to apply their own imprint to the traditions of the music business.

Broaden your reach
The band appealed to a younger scene with a 1995 cameo appearance on Beverly Hills, 90210.

The Lips revisited music history in 2009 with a track-by-track reinterpretation of Pink Floyd's landmark The Dark Side of the Moon, released exclusively on iTunes.

In what could be the ultimate demographic expansion, Aaron Sorkin (of West Wing and Social Network fame) is developing a Broadway musical inspired by the Lips' Yoshimi Battles the Pink Robots.

The Flaming Lips shirked conventions of how consumers listen to music in 1997 with Zaireeka, a four-CD set developed for simultaneous playback on four separate stereo systems.

In 2011 the band resurrected the Zaireeka concept with "Two Blobs F***ing," a new track broken down into 12 YouTube videos and designed for simultaneous playback on a dozen handheld devices.

Use all outlets for marketing

The introduction of a new onstage spacecraft prop at a 2006 show at Oklahoma City's Zoo Amphitheater led to a concert film released on DVD, U.F.O.s at the Zoo.

In 2008 the group augmented its music catalog with a feature film: Christmas on Mars, directed by Wayne Coyne and shot in the backyard of the singer's Oklahoma City home.

The 2009 holiday season brought the introduction of the Lips' first ornament: the Silver Trembling Fetus.

Always be creative
A 2009 version of the record Embryonic hit stores wrapped in a fur-covered CD package.

2011 projects in the works include a musical salt box, a collaboration with Led Zeppelin's Jimmy Page and what Coyne calls "a little spinning stroboscope thing."