The Spark That Fuels Wildfire Interactive

The adventurous couple looking to shake up the social-media marketing industry.

By John Shinal June 29, 2011
Opinions expressed by Entrepreneur contributors are their own.

It's not easy for a couple to navigate the minefield that comes from combining their personal relationship with their efforts to build a successful company. Harder still is doing it twice. Yet that's what Victoria Ransom, 35, and fiance Alain Chuard, 37, are attempting with Wildfire Interactive, a maker of online marketing software that's among the fastest-growing tech startups in Silicon Valley.

Wildfire, whose product makes it easy for companies to run contests and other promotional campaigns on Facebook and Twitter, has a growing list of big-name customers, including Pepsi, AT&T, Sony and Unilever. In 18 months, its workforce has grown from seven employees to 120.

It's the second profitable company co-founded by the pair, who were long-time friends before becoming romantic partners. Last year, they sold the adventure travel company they started a decade ago, now called Access Adventure Travel, after building it into a multimillion dollar business.

The sale allowed them to focus full-time on Wildfire, which got its start in the summer of 2008 after Ransom and Chuard beat 600 other entrants to win a $250,000 first prize from the Facebook Fund, the social network's investment vehicle. In 2009, Facebook made an equity investment of another $100,000 in Wildfire, which has raised a total of $4.1 million dollars from the venture capital firm Summit Partners and angel investors, such as Jeff Clavier, who also owns a piece of Groupon. Most of that money is still in the bank, CEO Ransom says, because the company has been "consistently cash flow positive on a quarterly basis."

So what's the secret of their business success?

According to one of their backers, Ransom and Chuard have complementary skills.

"They play well off each other's strengths," says Andrew Collins, a partner at Summit Partners, a venture capital firm with $11 billion under management and offices in London, Boston and Palo Alto, Calif. "Victoria is a gifted leader and business mind, while Alain has a wonderful vision for product."

Ransom sets the company's strategic direction, runs operations and has been its chief fundraiser and public face, all while building a reputation as a leader in social-media marketing. She is the one who can rally a team around a common vision and "figure out any problem you throw at her," says Chuard, who's in charge of product design and development for Wildfire.

His strength, meanwhile, is "a good intuition for product and a good eye for what [software] design is best for customers," Ransom says. "With us, it's very clear who's doing what day to day."

In some ways, the two are an unlikely pair.

Chuard, who speaks four languages, was raised in Switzerland, part of an entrepreneurial family that saw both his father and uncle run successful businesses. Ransom, meanwhile, was raised on a New Zealand farm in the small village of Scott's Ferry.

They met at Macalester College in St. Paul, Minn., when Chuard, who was a professional snowboarder for several years, agreed to teach Ransom the winter sport. After starting off as friends at college, they never lost touch and have been romantically involved for more than a decade. But after moving to New York together, they found themselves working, unhappily, as financial analysts at rival New York investment banks. 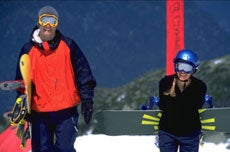 Alain Chuard and Victoria Ransom on the slopes in Whistler, B.C.
Photo courtesy of Ken Achenbach

"We weren't passionate about it and were trying to decide what to do with the rest of our lives," Ransom says.

But then the pair noticed the startup founders who came in to pitch to their banks did have passion for their work. So they quit their jobs and followed their passion for adventure by founding a company that let them travel the world teaching clients things like surfing, snowboarding and mountain biking.

When they needed Internet-based software to help run the business, Chuard, who majored in math and economics, designed and developed it. That application helped earn each of them spots in the entrepreneurial internship program at Highland Capital Partners in Boston, where Ransom had moved to earn a master's of business administration from Harvard.

The "aha" moment for Wildfire Interactive came when the pair wanted to run a sweepstakes campaign for adventure travelers on Facebook, but were disappointed in the software offerings available. So Chuard, who had earned his MBA from Stanford, created one called Promotion Builder.

So how do Ransom and Chuard balance their personal and professional lives in the ultra-competitive world of Silicon Valley Internet startups?

"When we're at work, no one would even know we're engaged," Ransom says. "It's not relevant. When we do disagree, we take it offline."

She thinks it's easier to have a partner who understands the 24/7 nature of running a startup, although Wildfire's rapid growth has put their marriage plans on hold. "Someone who doesn't know what that's like might feel neglected."

Hitting the slopes or the surf together in their precious spare time also helps, according to Chuard.

"It's a good thing we have so many other interests in common," he says.