By Diana Ransom October 27, 2011
Opinions expressed by Entrepreneur contributors are their own. 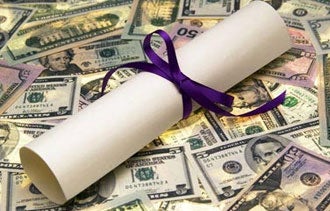 For recent grads who are having a hard time finding a job, starting up a business would be ideal, save for one thing: their giant student loans.

President Barack Obama yesterday announced more details about his plans to ease federal student loan burdens for low-wage earners like those looking to start a business, join a startup or work for a nonprofit. Though the program would help alleviate the loan burdens of students in general, one of its main goals is to lessen the financial pressures young entrepreneurs face when starting up companies.

Under the plan formally announced yesterday in Denver, starting next year, the President plans to lower borrowers' payment caps to 10 percent of their discretionary income -- that is a person's income after accounting for other living costs. The new measures would also shorten the forgiveness timeline to 20 years from 25 years. So, if someone had $100,000 of federal loans and earned an annual salary of $30,000, that person's monthly payment might amount to $1,150. Through the program, that borrower would pay just $116 a month, and, after 20 years, the leftover debt would be forgiven.

This proposal builds off of the existing Income-Based Repayment, or IBR, option for low-wage earners with federal student loans. The program currently caps federal-student loan payments at 15 percent of discretionary income -- falling to 10 percent in 2014.

Though the data on how much student debt entrepreneurs have upon leaving college isn't known, the overall burden recent graduates faced amounted to an average of $24,000 last year -- surpassing credit card debt for the first time ever. Tack on getting a Master of Business Administration or a law degree, and debt levels rise dramatically.

The result is that many would-be entrepreneurs simply turn away from starting up in favor of a steady paycheck -- especially considering that in the early days of starting a company revenues can be slim, if present at all. Though some entrepreneurs like Jason Rivera have chosen to defer their student loans.

Upon graduating from Lehigh University in Bethlehem, Pa., Rivera began paying back student loans of more than $100,000. Though steep, his $700 monthly loan payment was manageable as he worked for an advertising agency in New York. But entrepreneurship beckoned, and he spent the past year building Live Life Every Day LLC., a brand of organic clothing based in Piscataway, N.J. He could no longer meet his loan payments and so the 22-year-old decided to seek a deferral. The deferral for his federal loan, which accounts for roughly 20 percent of his overall debt bill, lasts for six months. For the balance, Rivera has two private loans, which he can only defer for three months at a time at a cost of $50 each.

This strategy does help alleviate some of the pressure startup entrepreneurs face, but it's not ideal by any stretch. By staving off loan payments, owners are allowing the interest on their loans to build -- making paying off their debts harder to muster as time goes on.

Of course, the President's new plan only addresses federal student loans -- not those issued by private institutions, which are common among students graduating from pricier universities and graduate education programs. Sam Gordon, the 27-year-old co-founder of the Oona, a smartphone-stand maker, pays around $800 to $900 a month in student loan payments, and he lives in New York City, which is notorious for its sky-high cost of living. "I pay the same amount in school loans that I pay in rent," he says.

If the University of Southern California grad participated in the program, he would be eligible to reduce just $7,000 of his total $120,000 student loan debt, as the rest is made up of private loans. Gordon would consider participating in the program, but it likely wouldn't do that much good, he notes. "Being an entrepreneur can be frustrating at times…but it's a sacrifice, and I knew that."

For more information on the IBR program, the U.S. Small Business Administration launched a new website where entrepreneurs can peruse case studies and calculate what their loan payments might look like.