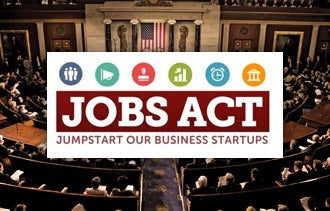 A bill designed to ease small businesses’ access to capital survived a challenge today from Senate Democrats, although it’s still unclear if the measure has enough support for passage.

Known as the JOBS Act – an acronym for "Jumpstart Our Business Startups" – the bipartisan legislation includes half a dozen measures that would reduce regulations that small companies face when seeking investors.

The bill had won easy passage in the House two weeks ago, and the White House has indicated its support. A number of companies with entrepreneurial roots, including Apple, Yahoo and Yelp, have also backed the legislation, saying it would create an “IPO on-ramp” and make it easier for startups to go public.

But a vocal group of critics – including the Securities and Exchange Commission and numerous consumer and investor protection groups – have denounced what they view is the bill’s inability to create a meaningful number of jobs and its lack of investor protections.

On the Senate floor this week, Senate Majority Leader Harry Reid (D.,Nev.) called “this IPO proposal” useful in giving startups the flexibility they need but “its impact on job creation will be limited.” Reid pushed for what he said would be a more successful measure to create jobs, reauthorizing the Import-Export Bank, but the attempt to add the amendment was blocked today.

Others argued that the JOBS Act could eat away at regulation that needs to be there to prevent an IPO bubble. Senate Democrats -- Jack Reed of Rhode Island, Mary Landrieu of Louisiana and Carl Levin of Michigan -- proposed an amendment last week that would moderate some of the proposals by the House. That amendment, too, was blocked.

The Senate is expected to take up the bill again on Wednesday, and a vote could come as soon as this week.

The legislation has had mixed levels of support in the small-business community.

Startup America, the White House’s public-private effort to bolster high-growth companies, has been a booster. Steve Case, the co-founder of AOL who chairs the program, advocated the legislation at last week’s South By Southwest Interactive festival in Austin, Texas, and has repeatedly said the bill would help entrepreneurs create jobs.

Meanwhile, the Main Street Alliance, a national network of state-based small-business coalitions, petitioned the Senate to kill the entire bill if the Reed-Landrieu-Levin amendment didn’t pass. Providing entrepreneurs with access to capital “should be done in ways that maintain the important safeguards that have been put in place to protect us from a repeat of the 2008 financial crisis and the extreme credit crunch that followed,” the group wrote in a letter yesterday.

Others in the entrepreneur community say they support the legislation, but would prefer Congress to take up measures that impact a broader range of small businesses as opposed to high-growth startups. “I am not opposed to the JOBS Act, and I am not opposed to crowdfunding,” says Ami Kassar, CEO of MultiFunding, a small-business lending consulting
firm in Broad Axe, Pa. But “it is unfortunate to me that all this political capital is being used on this idea that is going to help a tiny fraction of entrepreneurs.”