By Brian Patrick Eha September 13, 2013
Opinions expressed by Entrepreneur contributors are their own.

On a warm Sunday in September, stylish men and women lined up on a street in New York City's Meatpacking District to see a preview of the fall/winter collection of Frank & Oak, an ecommerce startup for menswear. It was the brand's first presentation during New York Fashion Week, so it was something of a coming-out party.

Inside, the bare industrial space evoked the workshop of famed inventor Nikola Tesla, complete with work table, assorted tools and a faux electricity machine. On plywood platforms, 12 models stood facing the crowd, dressed to ward off the winter chill. There was a green tweed suit, a double-breasted glen plaid blazer, a chunky white cable-knit sweater and, of course, the obligatory scarf or two.

The crowd passed through in shifts. As they left the workshop, guests were each handed something unusual: a copy of the inaugural issue of Frank & Oak's own quarterly magazine, The Edit. Printed on heavyweight environmental paper, issue No. 1 is 26 pages long, features actor and designer Waris Alhuwalia on its cover and is full of words and visuals designed to appeal to Frank & Oak's customers. Along with a profile of Alhuwalia, there is a piece about Montreal-based furniture company À Hauteur d'Homme, which has designed a men's valet for Frank & Oak, and a photo feature on what to pack for a fall trip to Portland. 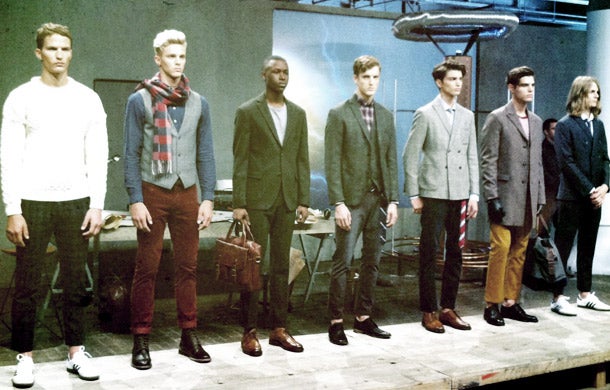 Whether they realized it or not, guests were holding in their hands the vanguard of a growing trend among ecommerce brands: the convergence of online retail and editorial content. Increasingly, digital retailers are finding value in weaving story elements around their products as a way of compensating for the lack of the sensory experience one finds in brick-and-mortar stores. And some are going even further, commissioning words and images with no obvious sales component.

Fashion marketplaces Net-a-Porter and Gilt Groupe pioneered the trend, and over the past three years it has snowballed. A new wave of ecommerce startups is now getting traction in the marketplace by marrying high-quality editorial with online shops boasting fast delivery, excellent customer service and lust-worthy products.

It's a strategy that is paying off for Frank & Oak, which received $5 million last October from Lightbank and other investors. Some of that money was put toward editorial efforts. Right now, three of the company's 100 employees focus entirely on researching and creating stories. While that may seem like a small fraction, it is a sign that the company is serious about educating and entertaining its customers.

Narrative merchandise
Michael Phillips Moskowitz, founder of one-year-old startup Bureau of Trade, wants nothing to do with unmemorable junk. The Bureau, as it's called, curates "narrative merchandise" -- unique clothing and lifestyle items, even classic cars and taxidermied scorpions -- for discerning men and makes the goods available for purchase online. "Precious pieces," the 35-year-old Moskowitz calls them.

His New York City-based team of five is supplemented by eight part-time curators in cities around the world, from Los Angeles to Tel Aviv, all of whom are tasked with finding stylish clothes, interesting books, vintage watches, antique furniture and other desirables for the Bureau. Some are found on eBay and Craigslist; others are sourced from trusted boutiques. Moskowitz himself spends time overseas once a quarter, hunting in shops, bazaars and souks. When he finds a merchant with an item he wants for the Bureau, he talks him into putting it online. The Bureau gets a cut of every purchase made through its website.

The goods are grouped by theme, often something au courant, though Moskowitz has also organized larger collections. Continental Rift, for instance, focused on Africa, with droll teaser videos released in the days before its launch. Either way, each item is tied to a larger story. "Storytelling and commerce are inseparable," Moskowitz says. "Otherwise it's just stuff."

It isn't surprising that a retailer who aspires to be "the merchandise equivalent of the Library of Alexandria" cares about the provenance of his wares. But he goes further, saying that as local and regional ties have loosened their hold over the past century, and racial and ethnic differences have become less contentious, our identities have come to be defined primarily by what we buy, where we eat, how we shop and other markers of cultural consumption.

It's an idea that has been voiced by Tyler Brûlé, founder of media brand Monocle, which serves the global cosmopolitan elite, and others: In today's world, possessions evidence character. In its extreme formulation, it's the idea that, at least in the eyes of others, we are what we surround ourselves with. By marrying shopping with storytelling, brands such as Bureau of Trade and Zady, a New York City-based fashion retailer that launched this month, charge what might otherwise be mere acquisitiveness with the primal human need for meaning.

It's a mistake to look for an immediate return on your investment in editorial, he says. Brand visibility, goodwill, excitement, customer loyalty -- these are the things it achieves. "You have to ask yourself what your goals are. Is it [sales] conversion, or is it marketing and branding?"

Lend us your ears

Lend us your ears
For brands that want to be more than mere online shops, maintaining a consistent editorial voice is paramount. The arch, worldly tone of the Bureau's editorial -- "more John Cleese than Gawker" -- is "the reason we were able to raise any money at all," Moskowitz says. (The Bureau raised $1.2 million in seed money in September 2012 from Foundation Capital and others.) "They want this voice. That's what people had a visceral reaction to."

Zady founders Maxine Bédat, 31, and Soraya Darabi, 30, say their editorial voice aims to be "an authentic voice for our generation." Zady launched with an eye toward rescuing people from the soullessness of fast fashion, and its founders' own sense of the zeitgeist is what determines the editorial content. The retailer produces two types of stories: brand stories, which Bédat says are fundamental to the company's mission, and standalone features. The former are based on interviews that Bédat and Darabi conduct with every brand they sell, dissecting what makes them special. The latter have no direct connection to the products Zady sells. 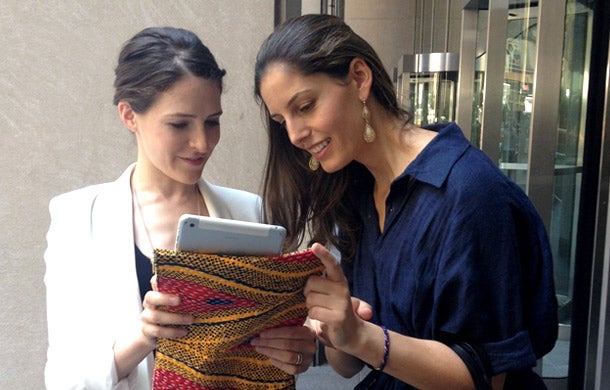 One feature is an interview with a New York Times photo editor who produced a Kickstarter-funded documentary about horse-rearing customs in Iceland. It seems a strange thing to find on a fashion retailer's website. "We think that the kind of customer who likes a story about denim made in North Carolina will also like a story about a beautiful documentary about wild horses in Iceland," Bédat says. She admits it's a hunch. "Time will tell us if that's true or not." For now, they can afford to experiment; Zady received $1.35 million in October 2012 from New Enterprise Associates and others.

Where Frank & Oak is building a dedicated editorial team, Zady is using serious freelance journalists to create its content. A feature on work-life integration -- as opposed to the impossible ideal of work-life balance -- carries the byline of Melissa Wall, the founding editor of Newsweek's iPad edition. "We're trying to define where we are culturally," Bédat says of the feature's subject matter. "So far, our intuition seems to be on point."

A shopping community
"You're essentially trying to build a community of like-minded individuals around your brand," Thoreson says of such efforts. Admittedly, the ROI picture is "murkier" with content that isn't tied to products, but such editorial is "no less powerful" as a branding tool, he says.

Since Frank & Oak's founding in February 2012, 800,000 people have signed up for its members-only site, with the majority of customers living in the U.S., Song says. And many who have downloaded the Frank & Oak mobile app access the app every day. As Song sees it, that represents a major shift in how brands are built and how consumers interact with products. "You'd never walk into a store every day," he points out.

Fashion and style magazines, as Moskowitz is quick to note, have always excelled at narrative -- and at the related art of cultivating desire. To hear him tell it, online retailers now have the chance to be like magazines, only better, because they can indulge the impulse to buy. "GQ isn't shoppable," he says. "Esquire isn't shoppable." 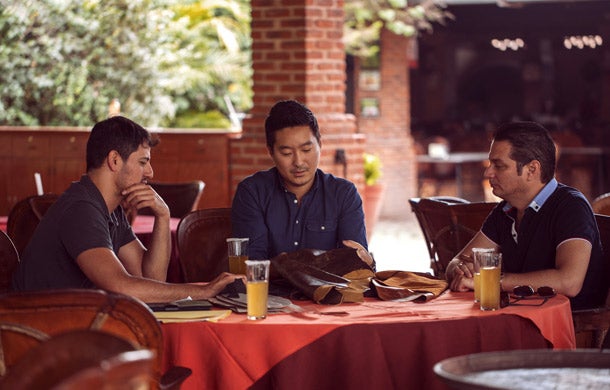 But producing editorial content that rivals the output of top magazines -- the standard to which Gilt aspires -- is no easy feat. "People forget that to do this well you need to have the right team and you need to carve out the right ecosystem within a business that isn't necessarily set up to do editorial," says Thoreson. "If you just treat it as some sort of commodity, you're likely not going to succeed here."

But with U.S. online retail sales expected to grow to $262 billion this year from $231 billion in 2012, it's worth doing what it takes to claim a bigger slice of the ecommerce pie. And already this kind of content is becoming expected for companies who want to stand out. Over the past three years, he says, a commitment to quality editorial "has gone from something that's a novelty [for ecommerce brands] to something that's an essential."

But however important content marketing is for online retailers now, it is as merchants, not publishers, that Bureau of Trade and other new-wave companies will ultimately succeed or fail. The women behind Zady understand this. "At the end of the day, Zady is a wonderful and beautiful ecommerce site," Darabi says.

Related: Struggling With Online Sales? So Are the Big Guys