Will This App Fundamentally Change the Way We Take Photos?

Computer vision – which, in a nutshell, teaches machines how to adopt human vision – is most commonly used by military equipment and robots to analyze and understand images by scanning them for data.

Noah Heller, co-founder and CEO of Seattle-based Vhoto, is today launching an app for the iPhone and iPad that will use this exact same technology to satisfy the everday consumer's needs for the perfect selfie or family picture. The app is free through the App Store in the U.S. and worldwide.

Vhoto uses the power of video to capture the perfect photo by combining computer vision with machine learning, a tool that lets the application begin to understand user preferences. The app evaluates over 20 dimensions, including blur, contrast, action/movement, faces, smiles, novelty and user intent to automatically pick the best frames – or the perfect moment – from the video. 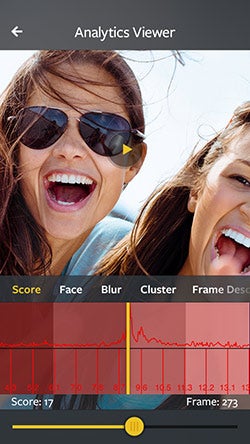 The app detects the "signal in the noise"
Image credit: Vhoto

For example, imagine a person standing in a forest filled with trees. Human eyes are instantly drawn to that person, and the brain understands that this is "the important data." For years, military equipment has understood how to find the "signal in the noise" – or the person in the forest filled with trees. Vhoto applies techniques like this to detect the best moments during a video of up to 20 seconds (or an uploaded clip of up to two minutes from your iPhone 5), whether it's a person walking into the frame-shot of a vast forest, or your best friend finally blowing out a cake at a birthday party.

Disrupting photography
Up until the late 1800s, humans didn't smile in photos because it took at least a whole minute of sitting absolutely still for a field camera to capture an image. Heller believes that with the emergence of Vhoto technology, the current act of smiling and posing for pictures will soon also become outdated.

At the core, Heller says Vhoto solves two fundamental problems with traditional mobile cameras: 1) hitting the button at the right second to get the perfect shot and 2) choosing between photo and video during life's most precious moments. The Vhoto app saves both mediums to your phone.

Related: Famed Photographer Predicts the Death of the Selfie 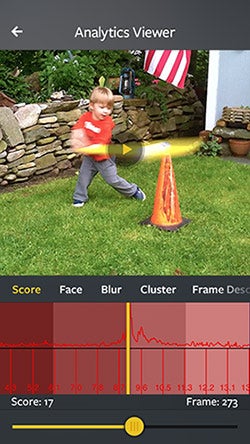 From gamer to glam shots
Heller got his start at Microsoft where he was in charge of social features like friends, messaging, etc. He then moved to video game publisher Activision as a product director, where he developed Call of Duty ELITE, a social network built around the hit game Call of Duty, with about 20 million subscribers. The entrepreneurial bug moved him to join Boston-based Atlas Venture as an entrepreneur in residence (EIR). There he met co-founder Hugh Crean, then CEO of airfare prediction site Faircast and Vhoto CTO Jay Bartot. To date, their venture has received $2.4 million in seed funding from Atlas and Polaris Partners.

But Heller hopes Vhoto doesn't become type casted as an app exclusively serving our contemporary selfie culture. He says many early adapters are parents who can now share with relatives their children's cutest moments, such as when a kid finally looks directly at the camera and smiles. Artists and photographers can capture the most visually aesthetic snapshots. Sports players are able to capture the split-second their bat hits the ball.

"When a new user tries Vhoto and captures an amazing moment, we know we have that user forever," says Heller. "But if we see a user only keeps producing traditional plain portraits with our app, we know they don't quite get it yet."