By Carmine Gallo June 12, 2014
Opinions expressed by Entrepreneur contributors are their own.

Since I wrote a book titled The Presentation Secrets of Steve Jobs, I’ve been searching for a presenter -- at Apple or any other company -- who comes close to sharing Jobs’ presence on stage. It hasn’t been easy. Jobs was charismatic, inspiring, humorous, dramatic, engaging and polished, and his slides were beautifully designed.

Apple is giving one vice president more time on stage and he’s the most compelling business presenter I’ve seen in a long time. His name is Craig Federighi, Apple’s senior vice president of software engineering.

Apple CEO Tim Cook introduced Federighi as “Superman” at Apple’s annual WWDC developers conference on June 2. Cook may have been referring to Federighi’s presentation skills. Federighi commanded 70 percent of the entire presentation and clearly stole the show, given the reaction he attracted in the audience and among bloggers who covered the event.

Related: Become a Master Communicator With These 5 Tips

1. Raise the energy level. Federighi doesn’t just walk on stage. He leaps, strides and exudes passion and enthusiasm in his voice and gestures. He has a smile on his face. He laughs easily. His energy level is high -- much higher than the average presenter.

Most people deliver a presentation in the same tone of voice and use the same energy as though they were speaking in hushed tones to a colleague in the hallway. A mission-critical presentation is not a casual conversation. It’s a performance. A performer such as Federighi brings up the energy in the room as soon as he walks in. 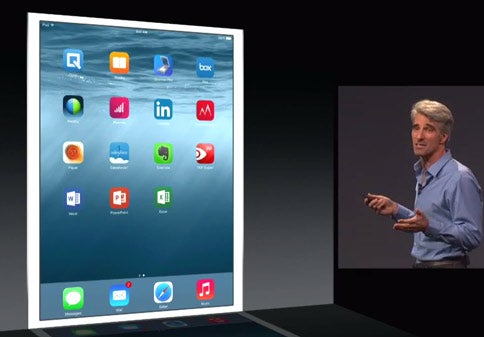 2. Make people laugh. Most business presentations are dry, boring and stuffy. Federighi didn’t get the memo. Right out of the gate he injects humor in his presentation. He kicked off a discussion of the new Apple operating system, “Yosemite,” by poking fun at the “crack product-marketing team” that develops names.

“We shoved them in their VW mini bus and set them out on the road. They ventured south and discovered OS X Oxnard … before boldly venturing north, landing at OS X ‘weed.’ Strangely, this had large pockets of support within the product marketing organization,” Federighi said as 6,000 attendees laughed and cheered.

Throughout the presentation he poked good-natured fun at himself, especially his mane of white hair, which he jokingly refers to as “hair force one.”

When Federighi was demonstrating new phone features, he was interrupted by a call from his mother (all of this is planned and rehearsed, of course).

“She surely wants to grill me about the newest fourth-tier LVM compiler, but this is not the right time,” he said as he hung up on her. The audience good-naturedly groaned. “I’m sorry,” Federighi responded. “She’s a wonderful, wonderful woman, but this is my space,” he said with a smile.

Related: How to Cut the 'Ums,' Uhs,' and 'Literallys' When Speaking

3. Keep your body language ‘open.’ Federighi has commanding presence. He doesn’t cross his arms or slouch. He has a constant smile and maintains an open posture, which means his palms are up and his arms are kept above the waist. Your body language speaks volumes before you say a word. 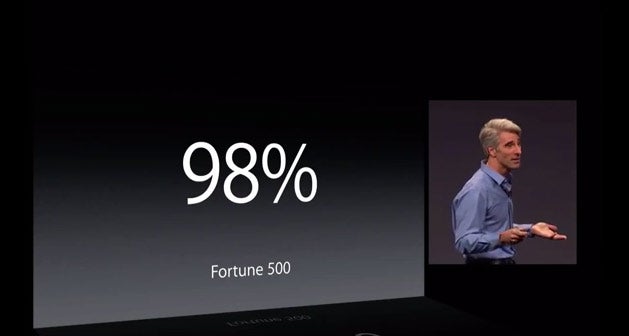 4. Design simple, visual slides. The average presentation slide has 40 words. It’s nearly impossible to find 40 words in 10 of Federighi’s slides. His slides were photographs, images and animations that complemented his message. This is called picture superiority, which means that information is more easily retained when it is presented as pictures instead of text.

I’m not suggesting that you avoid text completely. There were plenty of words in Apple’s WWDC 14 presentation, but images and simple numbers made up the preponderance of the slides.

For example, he spoke for two minutes before introducing a video of a new Apple ad (soft break). The ad lasted one minute and Federighi re-appeared to discuss a new feature of the software. He presented slides for another four minutes before showing a demonstration of the product (soft break). The demo was swift, lasting exactly five minutes. Federighi then picked up the clicker and went back to his slides.

By building in soft breaks every few minutes, Federighi can do what very few presenters can accomplish -- he can keep the attention of the audience for an hour.

You may never speak in front of an audience of 6,000 developers or customers as Federighi does, but the techniques that made him the most talked-about presenter at the Apple developer conference are the same techniques that will help you win over any audience.

Related: How to Be a Better, Stronger, More Engaging and Respected Leader

This App Helps You Overcome Your Fear of Public Speaking