By Jason Daley October 11, 2014
This story appears in the October 2014 issue of Entrepreneur. Subscribe »

Trends in sweets come and go, but for some time now it seems Americans have been moving beyond the notion of dessert with every meal in favor of the occasional premium indulgence. With high-quality ingredients, customizable options and upscale twists on traditional items, the newest franchises are offering treats that satisfy refined tastes--and betting they'll be more than just the flavor of the month.

Of all the love-hate relationships Americans have--Facebook, celebrities, soccer--the most fraught is our relationship with sugar. We've embraced it, rejected it, distilled it, created dozens of substitutes for it--and still consume about 75 pounds of it per person every year.

In the franchising world, entire segments rise and fall on the public's attitudes toward sugar. In the past decade, while ice cream concepts struggled, smoothies and "tart" frozen yogurt stepped in to hit the less-sweet spot. But now something strange is happening. Even as our national opinion of sugar hits another low point (see recent New York Times articles on sugar as a toxin), franchising is entering a sweet-treats boom, with several innovative concepts expanding their footprints.

While that may seem counterintuitive--and a recipe for disaster among an increasingly obese population--the new concepts may actually demonstrate an evolution in the public's conclusions about sugar. Instead of pushing sweet treats as an everyday indulgence, many of these new franchises are positioning their products as luxury goods, with high prices and decadent ingredients. For the most part, there's nothing healthful about them, but if you're splurging only occasionally, these concepts seem to say, then you ought to really treat yourself.

Florian Radke, co-founder of Cinnaholic, a custom cinnamon-roll franchise, says he and other concepts are tapping into new consumer behaviors. "People laughed at us when we said we were going to sell a $6 cinnamon roll," he says. "But if you're making an exception to have a sweet treat, why settle for something like a Twinkie when you can have something specially made just for you? People no longer see dessert as fast food or something they have to have with every meal. That category is pretty much dying."

In fact, the same changes that have given rise to fast-casual dining are permeating the dessert world. "People are done accepting cheap food," Radke says. "People are willing to pay more to be treated well. That's the whole thing. They want to be able to choose what they want right there, not just take what's on a menu board."

After 22 years in the health-club industry, Rome Gregorio never expected to be opening a franchise that sells customized ice cream concoctions. But he founded Texas-based Camille's Ice Cream Bars after developing a new outlook on the psychological benefits of the occasional treat.

While his wife was battling a second bout with cancer and undergoing a nine-month round of chemotherapy in 2010, the couple found it difficult to be optimistic. On one of their frequent trips to the chemo center in San Antonio, they decided to see if an ice cream shop Rome had frequented as a kid was still around. Thirty-seven years later, it was still there, with the same woman at the counter. "When we had those ice cream bars, it was just the sort of thing we needed to bring joy into our lives," he remembers.

It was after that difficult time that the couple chose to start their own business, and they had three requirements. "We decided it had to make people happy, it had to be family-oriented, and it had to be easy," he says.

Ice cream bars fit the bill. At Camille's, named after their daughter, the bars don't come out of a box; each day the ice cream is made fresh, blast-frozen in a special freezer from Europe. Customers can pick out their base bar of ice cream, frozen yogurt or fruit sorbet, then an "artist" will dip it in chocolate and dress it with anything from sprinkles and almonds to coconut and crushed Oreos. Besides the flagship location outside Austin, Camille's has six U.S. stores in the pipeline, along with a multi-unit development deal in Qatar and deals in other parts of the Middle East.

For the Gregorios, however, it's not simply about feeding customers' cravings. "Sweets are culturally rooted; they're part of our reward system," Rome explains. "I think that's foundational, like the law of gravity. I don't see anything wrong with what we do. Having a dessert is a break from the normal routine. People who are doing the right things are allowed to have a little balance in their lives." 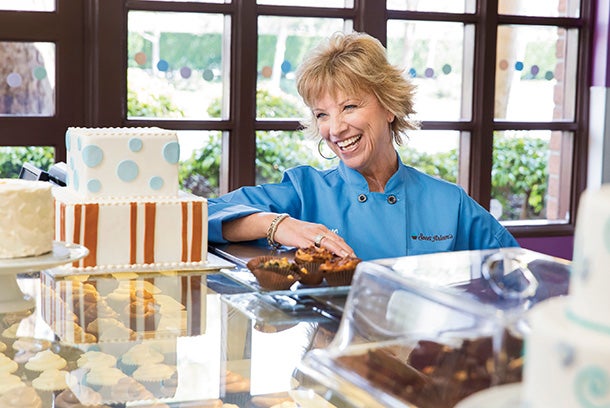 Sloan's Ice Cream, a Florida-based franchise that opened in 1999 and began franchising last year, is definitely a break from the normal routine. All of the company's flavors are over-the-top: Coffee & Doughnuts ice cream contains chunks of Krispy Kreme doughnuts; Circus has gummy bears in a cotton-candy-flavored base; and Cookie Monster is loaded with homemade chocolate chip cookies and Oreos.

Sloan Kamenstein's grandfather used to take him out for ice cream every day after school. Kamenstein moved to West Palm Beach while in college, then began designing flavors for the first Sloan's location after his culinary-school classes. That store--with its green-and-pink walls, carefully curated selection of toys and insanely tasty ice cream and baked goods--quickly became a tourist attraction. Kamenstein, who now has four company-owned stores and one franchise in Florida, hopes the same will happen for his next franchise location, which is due to open in the next few months in San Diego.

"I think one thing about us is that we have a lot going on," Kamenstein says. "We're not really gimmicky, despite the pink walls. We have really great ice cream done in a fun way. It's almost like going to a fantasy land. I think that's what some other places are missing. I think people want something better and more exciting than standing in front of a boring self-service yogurt machine. We offer memorable experiences. In fact, we have people visiting Florida who come to us even before checking in to their hotel. That's the kind of feedback we're trying to achieve."

Growing up poor in rural Northern California, Arleen Scavone spent most of her early years cooking on a wood stove and trying to find ways to stretch her family's homegrown vegetables. She managed to get out of the kitchen and spend a long career in banking, but in 2008, as the recession hit, she wanted to try something new. That's when her passion for baking resurfaced. She decided to specialize in cupcakes and bread pudding, and spent more than a year perfecting her flavors and recipes.

The result was Sweet Arleen's, which she opened in November 2009 in Westlake Village, Calif. While the bakery and catering business was popular, Sweet Arleen's became internationally famous after winning Food Network's Cupcake Wars three times. That gave Scavone the confidence to start a franchise program, which she launched in May 2013, with eight territories sold so far.

Although many people believe the heyday of the cupcake is over, Scavone says the quality of her products and her attention to detail will ensure Sweet Arleen's longevity. Her French and Italian buttercream icings aren't quite as sweet and sugary as typical offerings. And her bread puddings are available in flavors both sweet and savory--including dulce de leche, bananas Foster, eggs Benedict, mac 'n' cheese and corn with smoked chicken sausage--allowing the stores and their associated food trucks to operate through multiple dayparts.

Scavone isn't afraid of some sort of sugar backlash--she believes high-quality sweet treats are a trend that will last.

"I'm in my mid-50s, and I'm in the best shape of my life," she says. "I hope this next generation has learned a balance around eating and enjoying food--not eating three jumbo cupcakes in one sitting. People are starting to look for comfort with a balance. In fact, my personal trainer just texted me. She told me to bring her a red velvet cupcake because she's having a craving!" 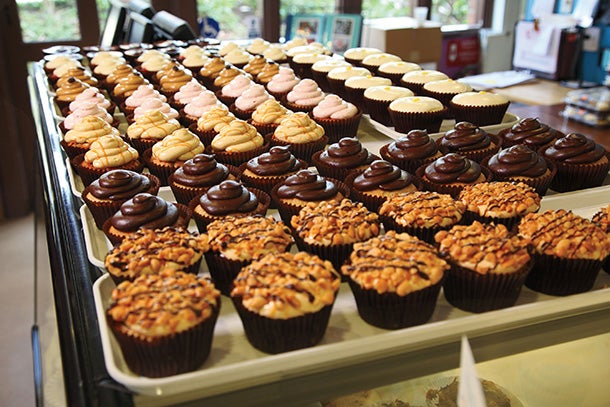 VEGAN WITH A TWIST

Cinnaholic's original store is in Berkeley, Calif., but it's working with Atlanta Franchise Group in hopes of expanding to 100 locations in the U.S. in the next few years. Owner Radke says he's excited by all the innovations in sweet treats. "Finding your niche and growing it, that's the whole beauty of the new dessert market," he explains. "I think you can see the trend in all those local bakeries that have lines out the door. Customers are realizing that if they're going to treat themselves, they ought to do it right. There are lots of businesses taking chances, and that's great."

No one, it seems, has taken a bigger chance than Radke and wife Shannon, whose customizable cinnamon roll is vegan, containing no animal or dairy products. An accountant and baker, Shannon chronicled her attempts to make the perfect vegan cinnamon roll on her blog Confessions of a Cinnaholic. When she got her ingredients just right, the couple opened their store and soon had lines waiting around the block. And with good reason--the warm cinnamon rolls are complemented by nearly 30 frosting choices, like pi?a colada and pumpkin spice, and 21 toppings, including graham crackers and blackberries.

Radke says most customers don't even realize Cinnaholic's fare is vegan. "I don't believe you can just put a product on the market because it's vegan," he notes. "It has to be outstanding. It's important to us that the product is amazing. We don't advertise the fact, but the vegan community knows we're here. My wife developed this product over a year, sometimes crying on the kitchen floor. It took a while to find the trick, but we've made the recipe so simple. That's the beauty--we can easily teach it to our franchisees."

There's no doubt sugar has power over us. In 2010, Seattle Seahawks player Golden Tate reportedly broke into Top Pot Doughnuts at 3 a.m. in search of a maple bar. It wasn't the shop's first brush with the big leagues. In 2003, a year after opening and becoming a Seattle institution, Top Pot was approached by Starbucks. A few years later, it began filling bakery cases at 13,000 of the coffee giant's locations with apple fritters, old fashioneds and chocolate-cake doughnuts.

But after six years of being Starbucks' house doughnut, Top Pot decided to regroup and try to grow on its own. By the end of this year, Top Pot will have 19 locations open in Washington and Texas, and will start franchising as early as next year.

Lauded on the Travel Channel and Food Network's Cooking Channel for its "hand-forged" doughnuts, Top Pot has something else going for it, according to co-founder Mark Klebeck: the eternal popularity of its namesake product.

"I think you had a muffin phase in the late '80s and early '90s, and other things have come and gone," he says. "But there's something about doughnuts. They're an indulgence, sure, but they don't get old. People enjoy them any time of the day. They can have them in the morning, or in the afternoon with a cup of coffee. Customers feel like it's something they can get every now and again."