By Brian Honigman December 3, 2014
This story originally appeared on BrianHonigman.com 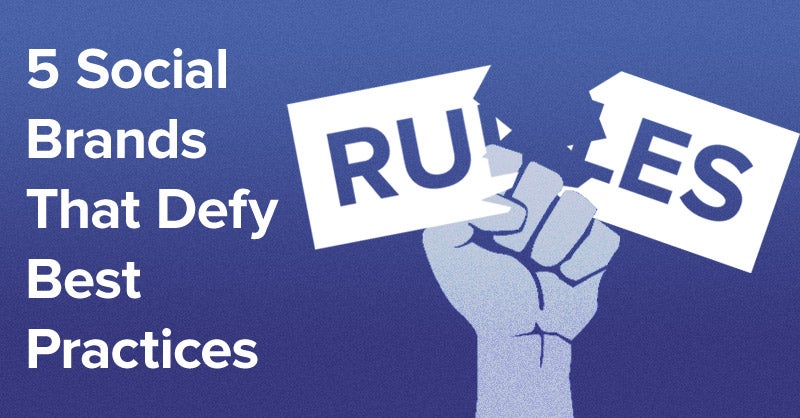 Pablo Picasso famously remarked, “learn the rules like a pro, so you can break them like an artist.” While he may have been talking about painting, the lesson can just as easily apply to any skill - like social media marketing, for example.

There are many brands out there that don’t follow social media best practices simply because they lack the knowledge or resources to do so.

However, a few noteworthy social brands seem to have a true understanding of the established standards but ignore them in ways that make sense for their brand and actually enhance their online presence.

Related: How Being More Self-Aware Can Help Your Brand Succeed on Social Media

Denny’s gets weird on Tumblr.

For a platform that has such diehard fans and generates so much content and activity, Tumblr seems to not get nearly as much attention from brands as other social networks do. In addition, the brands that do actively maintain a presence on Tumblr seem to play by different rules than the regular users.

Taking a look at some of the top brands on Tumblr reveals that they are almost absurdly polished.

Sure, this might make them aspirational and be good branding from a typical advertisers perspective; but they really don’t seem to fit in to the community at large. Just look at the difference between a well-done brand Tumblr and the Tumblr of an actual user.

The standard branded Tumblr seems a lot more like a professional blog that just so happens to be hosted on Tumblr. However, there are some brands that buck this trend and create a presence on Tumblr that feels much more authentic if not a little unorthodox. The best example of this is Denny’s.

Scrolling through Denny’s Tumblr is like stepping into an alternate universe. The content ranges from fairly odd (haikus about pancakes) to downright bizarre (sausages making “yo mama” jokes). The one thing all their posts seem to have in common is that they feel like something your average Tumblr user would cobble together, just slightly more professional, consistent, and breakfast-food related.

The result of this unique approach is that Denny’s followers actually interact with and respond to their blog. Most branded Tumblrs feel like they’re showing off, but Denny’s blog seems to take itself a lot less seriously.

They could have simply posted dolled up photos of diner food, or some equally slick campaign; instead Denny’s decided to take a risk and create content that actually genuinely fits with Tumblr’s weirdness. Looking at their page and the success it’s enjoyed, the risk seems to have paid off.

Government agencies are known for many things, but being interesting on social media is certainly not one of them. Most agency social accounts are simply channels for relaying information and/or patting their own backs.

Given that the standards are so low, it’s surprising that one of the most entertaining Instagram accounts out there is run by the exceedingly unpopular TSA. Articulating exactly what makes the TSA’s Instagram so intriguing is hard, but it has something to do with the contrast between the matter-of-fact governmental tone and the absurdity of the content.

The TSA Instagram features the most unusual and ridiculous items that people try to sneak on to airplanes around the country. Whether it’s a de-activated grenade orbrass knuckles with a blade attached they use the same straightforward voice to calmly inform us that “Trench knives (and all other knives) are prohibited from being transported in carry-on bags.” 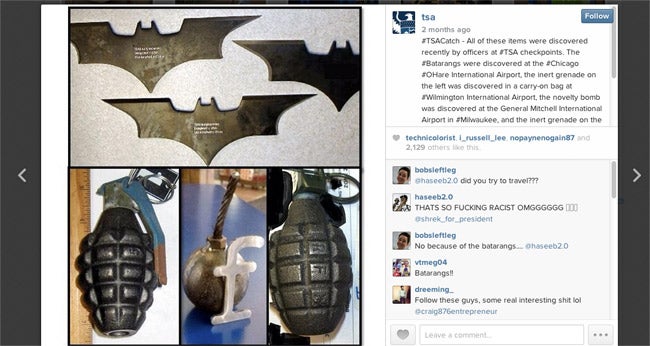 The TSA’s account still achieves the same goals that other government accounts do (informing the public); but by giving us a glimpse into just how much the TSA actually catches, their Instagram also helps demonstrate why they are a beneficial agency.

The oftentimes hilarious posts don’t come off as unprofessional, because the humor genuinely seems unintentional. The account simply presents the situations as they happened and allows their followers to make of it what they will. And who knows, maybe after seeing a few posts someone will think twice about packing that Battarang in their carry-on.

Zara lets their photos do the talking on Facebook.

Even before Facebook acquired Instagram, it was the world’s top photo-sharing site with 250 million photos being uploaded daily. With that in mind, it only makes sense that photos are among the most popular content posted on Facebook. However, most photos are accompanied by caption to give them context and make their message clearer.

Indeed, nearly every big brand on Facebook (especially apparel brands) publish posts that use photos along with a line or two of copy. Zara is not one of those brands. Instead nearly every Zara post consists of a high-quality photo, some hashtags describing that photo and a link to the product. There is no other text.

The effect is a little jarring, and seems counter-intuitive. Wouldn’t these posts benefit from a little more explanation? Who actually uses hashtags on Facebook?

A little more investigating reveals that their posts from Facebook are nearly identical to their posts on Instagram and very similar to their Twitter posts. This is typically regarded as poor form in the social world.

Yet, despite all these broken rules and questionable decisions Zara has one of the most liked Facebook pages and a rabid fan-base. One interesting component of this social strategy is the dedicated section of their website titled “#zaradaily.” This section features daily product photos and many of the posts blasted across their social channels all point back to this one page.

Breaking the rules make sense for Zara in this case, because their social channels are merely acting as an avenue to lead shoppers to their site, where the content has the appropriate context.

The enigmatic Facebook posts are sparse on purpose. The goal is to grab the user’s attention and get them to click to the site, where they will hopefully be sold on the product. It’s an interesting strategy and one that seems to be working.

Parks and Recreation highlights their fan’s reactions on Twitter.

Fewer and fewer people simply watch TV anymore. An increasing number are simultaneously using another device while watching their favorite TV. A recent study showed that 44 percent of viewers were viewing another screen while watching television.

As a higher proportion of viewers tune into multiple devices, networks are clamoring for ways to hold their attention on all these different media channels. Due to its real-time nature, Twitter is the perfect fit for keeping fans constantly engaged.

As such, nearly every TV show has a Twitter account and most are run in similar fashion. These accounts consist mostly of tweets promoting the show and blasting micro-content created by the networks.

One show that bucks this trend is NBC’s irreverent comedy, Parks and Recreation. Instead of focusing on posting their own content, they almost exclusively re-tweet fan-created content and personal reactions.

Another notable feature of their account is that there is not many promotional tweets regarding the show. Contrast this to accounts like Modern Family’s that tweet their own content and rarely re-tweet user generated tweets. 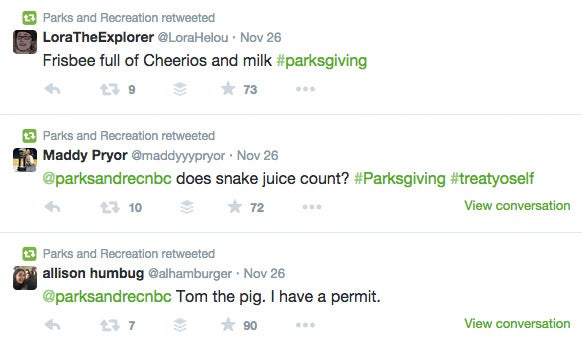 Although this may seem like a strategy born out of laziness, it actually requires Parks and Recreation’s community managers to pore over fan reactions and find the best and most relevant bits.

What they understand is that a fan’s piece of content (if it’s good enough) will be much better branding than their own manufactured content - especially when it comes to promotional tweets.

Instead of telling their followers to watch the Halloween episode, it is so much better to re-tweet a fan who excitedly proclaims that to honor Halloween he is going to watch every Halloween special ever aired.

There has been much talk about how YouTube is set to overthrow traditional television, and the past half-decade or so has shown that even independent creators are capable of creating content that rivals that of networks.

One key difference though is that a lot of these content-creators don’t seem to abide by the same strategies that the television industry used so successfully.

Instead of often banding into consolidated networks that have many programs under a single umbrella, many YouTubers prefer instead to maintain looser affiliations with fellow content-creators.

The highly successful Vsauce channel for example has two associated channels named Vsauce2 and Vsauce3 instead of simply creating those channels within the original channel they are only tangentially promoted.

However, a young upstart channel named Wisecrack has decided to take the opposite approach. Wisecrack has created an informal YouTube network that has quickly risen to prominence.

The channel first began as Thug Notes (which you can still see in the channel’s url), which was an educational/entertainment channel that analyzed classic literature with gangsta-rap terminology.

Thug Notes was a runaway success, and it’s creator/star (who goes by Sparky Sweets Phd.) decided that he wanted to expand the purview of the channel into other areas.

Instead of creating a separate channel for each of these new programs, he simply rebranded the channel under the name Wisecrack, and chose to have it encompass the addition of 8-Bit Philosophy and, more recently Earthling Cinema both living within their own playlist.

This strategy has multiple advantages. First of all, by using all three channels to court viewers, they are more likely to get more subscribers and views on their videos.

In addition, if they ever decide to release a new channel, they will have a captive audience to broadcast it to. There’s a reason that television networks adopted this practice. It makes sense and consolidates your efforts.

What all of these various examples have in common is that these social brands were aware of the rules and had such a strong understanding of the reasons behind them that they knew when it made sense to break them - and they defied these best practices them much to their own benefit.

Which reminds me of the famous quote by journalist, Miles Klington: “Knowledge is knowing that a tomato is a fruit, wisdom is not putting it in a fruit salad.”

What do you think about the idea of brands purposefully defying best practices? Are there any brands that do this particularly well that I didn’t cover? Let me know in the comments below. And, as always, thanks for reading.