Forget Beacons: The Future of Retail May Be Magnetic

By Emily Price August 24, 2015
Opinions expressed by Entrepreneur contributors are their own.

Did you know your local mall has its own unique magnetic signature? It does -- and in the future, it could help inform the way you shop.

On Monday, IndoorAtlas unveiled a new technology that should make it more convenient for shoppers to find what they’re looking for when they visit a mall. Rather than merely indicating where a store is situated in an indoor shopping setting, the technology can pinpoint exactly where a product category, such as men’s shirts, is located. The tech can also be used to find specific brands.

A building’s magnetic signature is determined by “how much steel and metal is in the building” as well as how it’s constructed, Aaron Liao, IndoorAtlas’s director of developer evangelism, told Entrepreneur during a demo of the company’s mobile app. Every building will be different based on how it was built and where it’s located.

Whereas beacon technology requires installation, IndoorAtlas uses your phone's built-in compass sensors to track the signals produced by a building's steel girders. Using this magnetic map, your phone is able to figure out where you are in the building and direct you to what you’re looking for. This means there’s no need for retailers to maintain any hardware (beacons, like all electronics, eventually run out of battery power), and shoppers end up with an accurate idea of where products and brands are located.

“You can say to it ‘Find me men’s shorts’ and I can give you turn-by-turn walking directions to every instance of men’s shirts, whether they are inside Bloomingdales, Abercrombie and Fitch, or Nordstrom,” says Liao. “It’s amazingly accurate. We boast one meter of accuracy, which is effectively the difference between leading you to men’s button-down shirts and the casual t-shirts that are right next to them. Three feet of accuracy means I can lead you directly to the soap versus the shampoo that’s right next to it.” 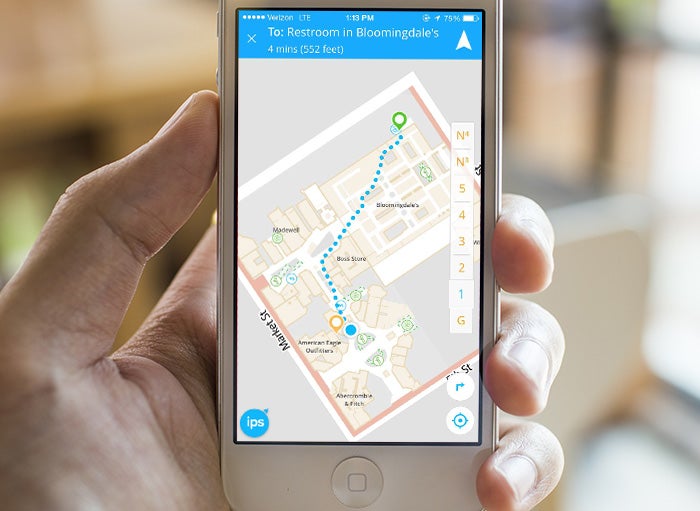 The only issue: all data needs to be manually added into the app. In other words, before IndoorAtlas can direct shoppers’ to the men’s shirts aisle in a store, someone must first manually input the correct location information into the app. Right now, the company is handling the mapping side of things on its own, but the hope is to ultimately crowdsource the data, and operate in a similar fashion to Waze, an app through which users share real-time traffic and road information.

The goal is that once enough people begin using the IndoorAtlas app, they will organically update the data themselves, says Liao. So, just as if you were reporting an accident on Waze, if you’re looking for socks and realize they’ve been moved across the store floor, you might update the app to reflect the change so others don’t have the same problem.

Liao says the company also hopes to partner with retailers, who would update the app whenever they reorganize the store floor. They’d also be able to offer deals and coupons that will show up on consumers’ phones when they’re shopping nearby.

A trial of tech is currently underway in San Francisco at the Westfield Mall on Market Street. Westfield is the first location in the United States to try out the tech, but it’s already being used in some retail locations overseas.

Beyond finding things to buy, the app can be used to find people. If you and a friend are shopping together and happen to lose each other, you can opt to share your location with your buddy and get turn-by-turn directions to his or her whereabouts.

It certainly could make shopping, especially in larger malls like Mall of America, a lot less of a headache.

Related: Everything Business Owners Need to Know About Beacons