This Baskin-Robbins Franchisee Has Made Ice Cream a Family Affair

Chris Locher of Roswell, Georgia, must really love ice cream because after spending five years in Baskin-Robbins' executive ranks -- as director of operations for its Eastern Region -- he jumped to the franchisee side and just this past August opened the first of two Georgia stores with his wife, Mindy. The couple then hired their two daughters, Madison and Miranda, as staff. Of course, Baskin-Robbins has upped its famed "31 flavors" to 1,200 choices, so Locher may have a ways to go to try them all. 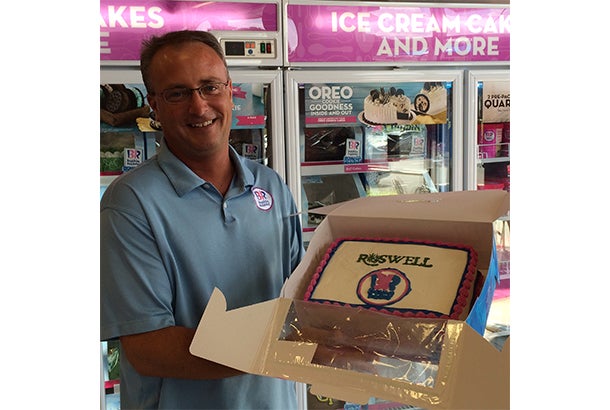 I opened my first Baskin-Robbins franchise on Aug 27, 2015, after signing a two-store deal with the company. My first shop is in Roswell, Georgia, and my second will be located in Marietta.

Related: This Franchisee Has Learned 'How Sweet It Is' to Be in Business for Herself

During my tenure as director of operations, East Region, for Baskin-Robbins, I showed so many people how to become successful franchisees that it was time to do it for my family and for myself.

For 10 years, I was the vice president of operations in the Southeast, for Papa Johns. Most recently, I ran the East Region for Baskin-Robbins as director of operations. I held that position for five years and loved the brand, so I decided to go out on my own and buy a franchise.

Baskin-Robbins is a 70-year-old, iconic brand that’s built a business around delivering fun. We literally sell fun and make people happy! It doesn’t get much better than that. Everyone leaves with a smile, which makes it such a satisfying career choice.

My background prepared me for franchise ownership. In the past, I’ve had many different roles and acquired the experience to be successful for myself.

Related: Why I Wanted to Bring a Smoothie Franchise to Military Bases

The waiting, especially since I like to keep busy. Lease negotiations and construction can take a long time, but both are so important to get what you want and need.

Plan, plan, plan and then do more planning. Take your time to get it right the first time. As a franchisee, you only have one chance to make a first impression once you open your doors.

Related: 'Creating Smiles and Stories' for Customers Is Just One of This Mega-Franchisee's Goals