When Instagram launched its Snapchat-clone Stories, which lets users share videos and photos that disappear after 24 hours, some commentators suggested the feature could stunt Snapchat's growth.

Early anecdotal evidence showed several "Snapchat Stars" were quick to embrace Instagram Stories, thanks to its already-huge audience of more than 500 million users and because it's far easier to discover content and users on Instagram than it is on Snapchat.

And for brands, Instagram houses a more sophisticated advertising and analytics platform than Snapchat currently offers.

Stories is a hugely-popular part of the Snapchat app, with more than a third of its daily users using the feature to broadcast what they getting up to. Snapchat claims its users watch 10 billion videos per day, which is largely thanks Stories. Hence why some people are viewing Instagram Stories as an existential threat to Snapchat.

Business Insider asked SensorTower, a mobile app store marketing intelligence company, to run the data to see whether there had been an impact on Snapchat usage since the launch of Instagram Stories on August 2. 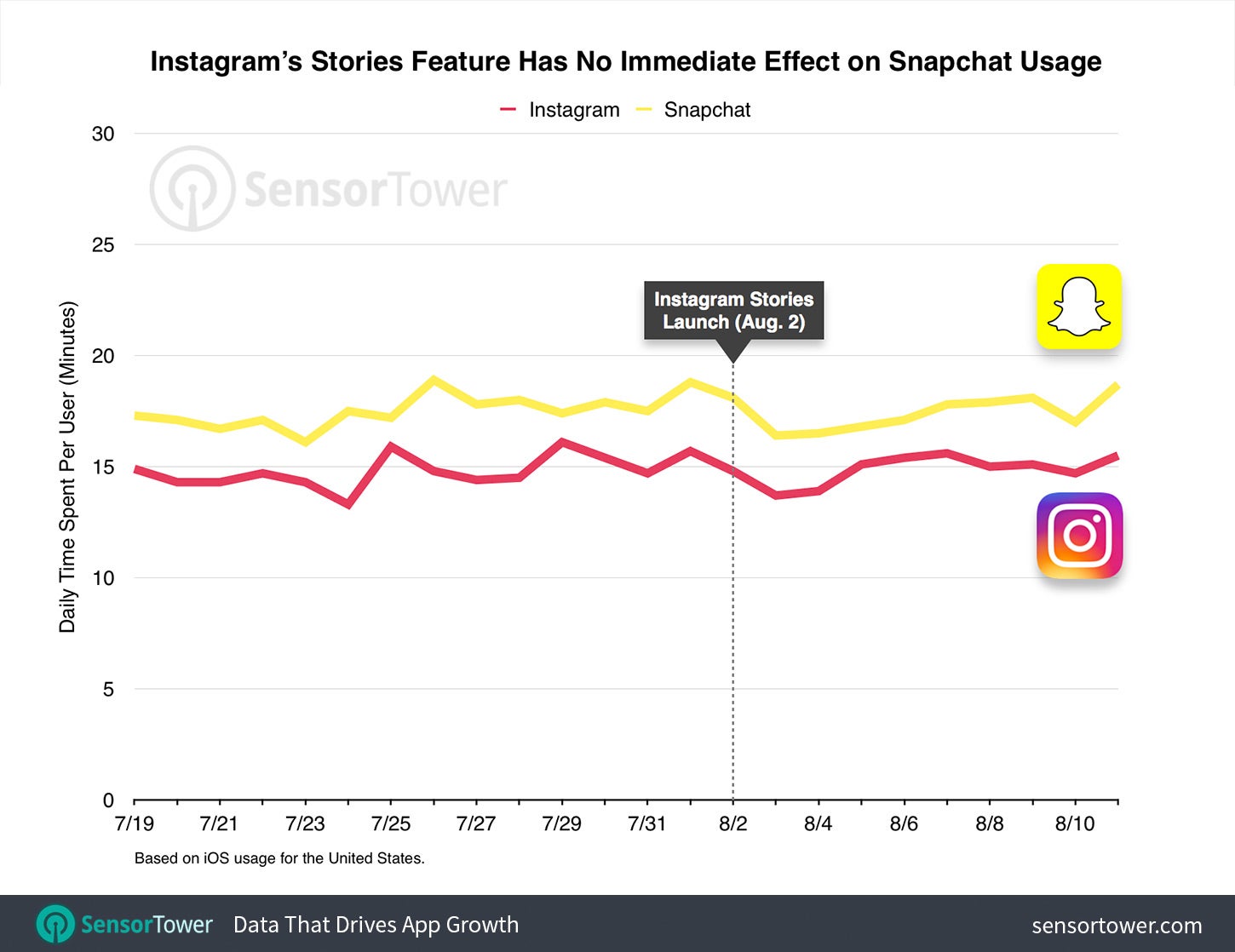 As the graph shows, Snapchat users still spend more minutes each day on the app than people spend on Instagram and that trend doesn't appear to have been directly impacted after the Stories launch.

Sensor Tower uses anonymized mobile data from its mobile panel, which represents "millions of users" in more than 30 countries.

It has only been two weeks since the launch of Instagram Stories, so the data is hardly conclusive. But perhaps it shows that Instagram and Snapchat -- while now offering an almost-identical Stories product -- still cater for different audiences and different needs.

Nick Cicero, founder and CEO of creator-network company Delmondo, which offers brands Snapchat analytics, told Business Insider: "I'd say that that overall, the Instagram experiments have resulted in great completion rates and comparable view counts to Snapchat, and for some of our creators who were already large on Instagram, they're definitely seeing more story views in the millions."

"That being said," he added. "There's a certain type of audience on Snapchat and I don't think that it's going to slow down at all. Most of the customers we work with said they don't plan to stop creating on Snapchat any time soon."

In other words, Snapchat's audience skews younger than Instagram. Snapchat claims to reach 41% of all 18 to 34-year-olds on any given day in the US, citing Nielsen data. A recent survey from Piper Jaffray showed Snapchat is the most popular app amongst teens in the country. Last year's survey showed 33% of US teens polled considered Instagram their most important social network, but by this spring that number had dropped to 27%. 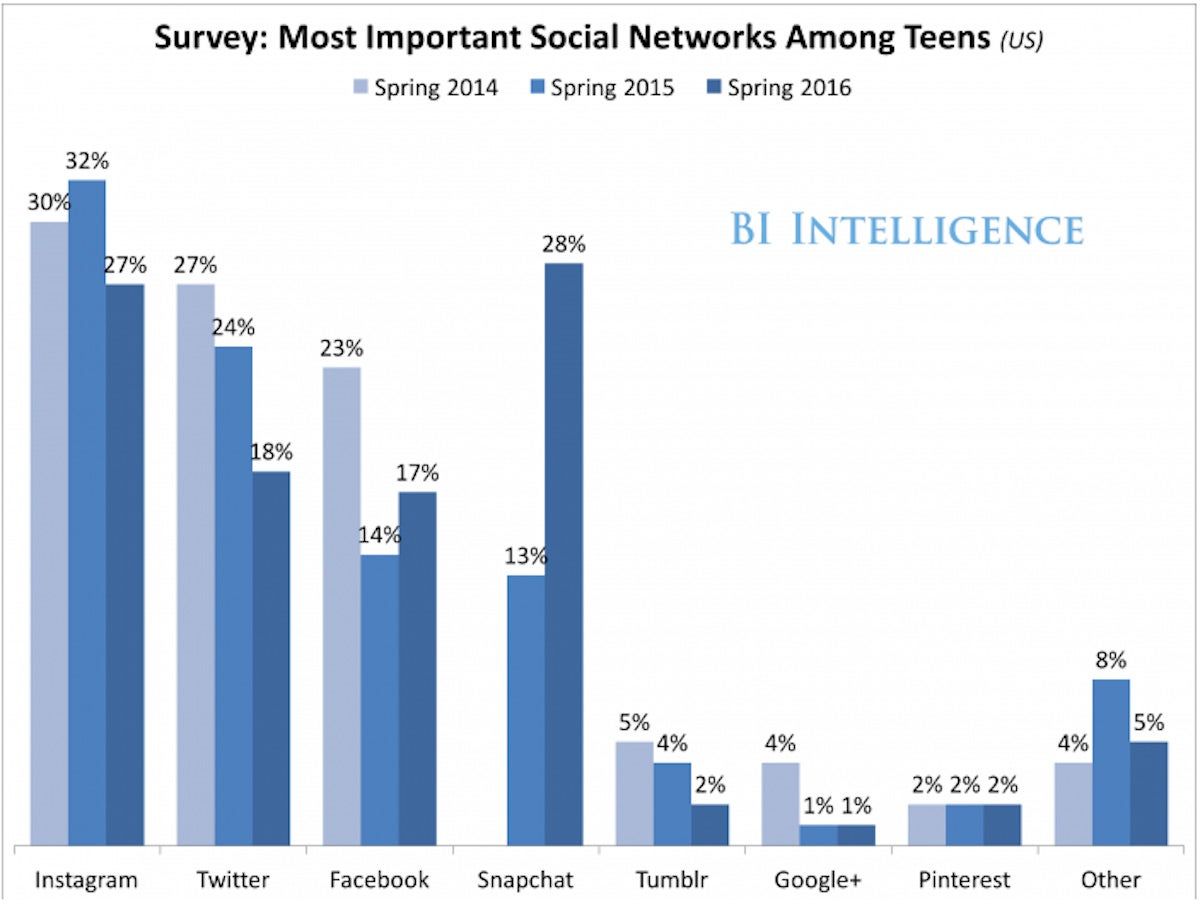 Hannah Beesley, social director at Iris Worldwide -- an advertising agency that works with brands including Samsung, Jeep and Reebok -- thinks Stories shows how Instagram is shaking off its image as the "shiny" network, with its curated feed of polished and often unrealistic-images, which could become a concern for Snapchat, which was often seen as the more fun app.

She told Business Insider: "Stories will definitely eat some of Snapchat’s lunch amongst their older demographics who didn’t take to Snapchat quite so naturally, but liked its informal nature. They are making bold moves to secure their dominance over the 24-45 age range of their heartland. Snapchat will retain its younger audience but for how long? If I can go to Instagram for both shiny and informal experiences, Snapchat needs to offer something different to fight the dominance of the Facebook-backed Instagram reach."

One metric to consider to determine whether Instagram really is eating Snapchat's lunch is engagement. We spoke to several sources who work with brands and influencers who said that early tests showed that reach -- the total audience that viewed a photo or video -- is often higher on Instagram Stories, but retention rates -- how long users spent watching the videos and photos -- were higher on Snapchat.

One digital head at a global fashion retailer, who asked not to be named, told Business Insider: "Whilst reach is important, when it comes to video storytelling, factors such as retention rate need to be considered. Looking at this metric, [we have] seen a significantly higher view-through rate from Snapchat over Instagram giving us insight into each platform’s typical user behavior and attention span."

However, those findings were inconclusive, as there are some occasions where the exact opposite was true and there has yet to be a big enough sample to pull any clear generalities from these types of anecdotes.

What we can conclude, two weeks after launch, is that Snapchat hasn't felt any immediate pain from Instagram Stories ... yet.

Leave Your Competition in the Dust With These Snapchat Marketing Strategies