The Surprising Artistic Beauty Still to Be Found in Muslim Countries

These countries conjure mental images of violence and tragedy. But artistic entrepreneurship is still very much alive in those parts of the world.

By Sherry Gray February 18, 2017
Opinions expressed by Entrepreneur contributors are their own.

When most of us think of Muslim-majority countries, certain images dominate our thoughts, and they aren't pretty. Some of us will go immediately to the tragedy in Syria, for instance: tiny bombing victims, covered in ashes and blood; destroyed buildings. Others will picture horrifying terrorists doing unimaginable things.

Almost all of us will draw on images of women covered from head to foot.

Newscasts also play a part, making it hard to remember that, not long ago, places like Syria hosted modern cities full of well-educated, creative people, with dreams and businesses and aspirations. People who dressed in clothing you might see anywhere in the world.

But those images have faded; today, we don't see much evidence of the vibrant culture, art, and fashion that once emanated Muslim-majority countries. But it exists, and it is glorious.

Entrepreneurs are still very much alive and well in Muslim countries around the world. Here are some examples:

Fashion magazine Savoir Flair gives us a peek into the UAE fashion scene. I'll admit I was surprised and delighted to find stunning, sparkling and surprisingly bare couture worthy of any runway in Milan or New York.

Syrian designer Rami Al Ali, for one, takes my breath away. Stunning, besparkled couture dresses with silhouettes at once classic and ultra-modern, architectural and softly feminine.

Capturing one of life's signal events with stunning photography

Award-winning wedding photographer Yoong Siang Lee immigrated from the Muslim-majority country Malaysia to Canada on his own at the tender age of 16. Just ten years later, his studio, Focus Photography, is a successful business well known for breathtaking wedding cinematography. His talent lies in capturing the intimacy of the moment, highlighted with artful dramatic lighting worthy of Hollywood productions.

Yes, a Muslim woman has designed a mosque.

In 2008, Turkish designer Zeynep Fadillioglu made history. She became the first woman ever to design a mosque. Istanbul's spectacular Sakirin Mosque is elegant, ornate and symbolically traditional, blending contemporary beauty seamlessly with religious requirements for a serene place of worship as beautiful on the inside as it is from a distance.

Painting a canvas highlighting the dichotomy of the Muslim world

Mixed-media interdisciplinary artist and Anglophone poet Shurooq Amin is the daughter of a Kuwaiti father and Syrian mother. Her work is controversial and political, often highlighting the dichotomy of the Muslim world by juxtaposing the trappings of wealth and the horrors of excess or war.

It was not difficult to choose one artwork from the Shurooq Amin Gallery. While each evocative piece spoke to me, nothing captured more perfectly what I want to convey than The Mistress of Vices. Here it is: 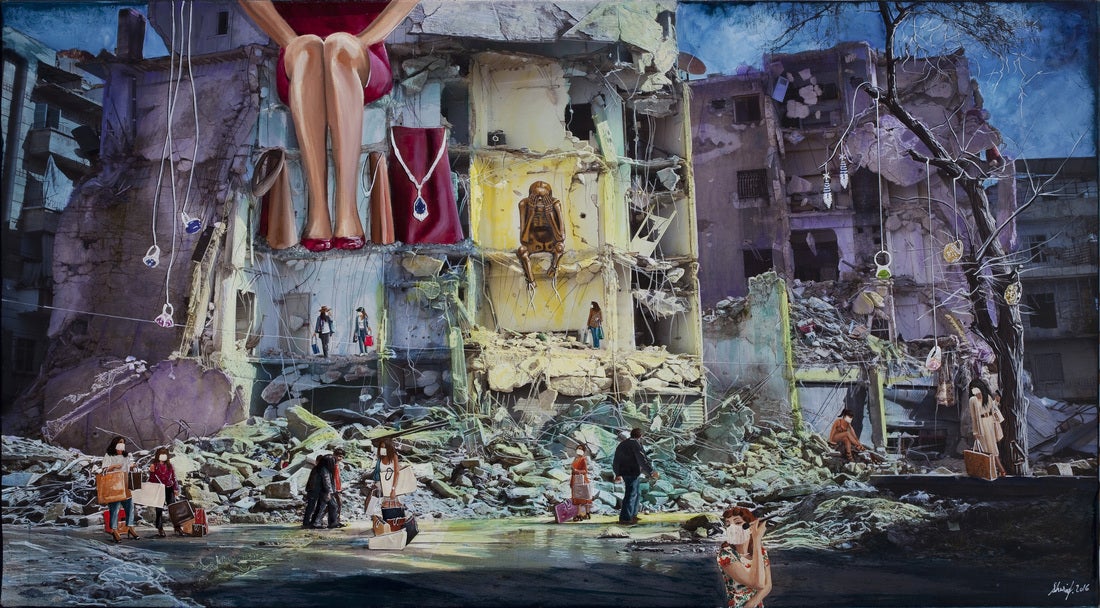 The title indicates that Amin may have intended a different impression, but I see devastation and destruction, with ordinary people like you and I going about their daily lives amid the rubble. Modern, well-dressed women, silenced, perhaps, by their culture? Wealthy women silent by choice, willfully ignoring their surroundings, insulated by money and class structure? The powers of the world represented as the woman dominating the scene, reaping the obscene profits of devastation?

Whatever the artist intended, wealth and destruction combine to create a Mad World, the title of the series, and it's perfect.