5 Side Hustle Lessons I Learned From My Day Job

If you're sitting on a side hustle idea and ready to pull the trigger, here are five big lessons I've learned so far that might help guide you from startup to scaleup and beyond.

By Courtney Seiter
This story originally appeared on Buffer

I never planned on being an entrepreneur. That label always sounded far too lofty for me.

Entrepreneurs were guys in suits working everyone in the room. Entrepreneurs only got three hours of sleep a night because the rest of the time they were hustling. Entrepreneurs would look at someone like me and realize right away that I didn’t belong.

Women now make up 40 percent of new entrepreneurs in the United States. And startups these days don’t have to be about in-office kegs and sleeping at your desk.

Related: What Buffer Can Teach Us About Customer Service

In fact, in 2014 I was lucky enough to join Buffer, where we focus on transparency, gratitude and inclusivity. Here, I’m encouraged to take healthy risks, get out of my comfort zone and expect more from myself than even my teammates do.

As it turns out, that’s been just the recipe for entrepreneurship of my own.

Today, my social enterprise business Girls to the Moon is in year three of empowering girls age 10 to 14. We’ve had important conversations with them about consent, body image and sexuality. We’ve introduced girls to incredible women -- everyone from astrophysicists to venture capitalists. And we created a membership program to help us grow beyond our city and impact more girls around the U.S.

And every step of the way, I’ve been amazed by how much my startup experience at Buffer has guided my entrepreneurial journey at Girls to the Moon. If you’re sitting on a side hustle idea and ready to pull the trigger, here are five big lessons I’ve learned so far that might help guide you from startup to scaleup and beyond.

1. Your values will guide your course.

Before Buffer, I couldn’t have imagined what a difference it makes to work at a company where values are more than some words on a wall. Instead, they’re a true testament to how teammates treat one another and make key decisions.

Our 10 core values have had a big impact on our trajectory and on my own life, so I knew my side business should find its own values early on, too.

After my first big Girls to the Moon event, my co-founders and I holed up in a Chattanooga loft to determine our values.

We followed a simple process of sticky note brainstorming, revision, editing and finalization. Here’s what we came up with:

Inclusivity: We seek out diversity and welcome all
Respect: We know our worth and speak positively about ourselves and others
Empathy: We challenge ourselves to see things from others’ point of view
Fearlessness: We encourage one another to take chances and healthy risks
Truth: We speak openly and honestly. 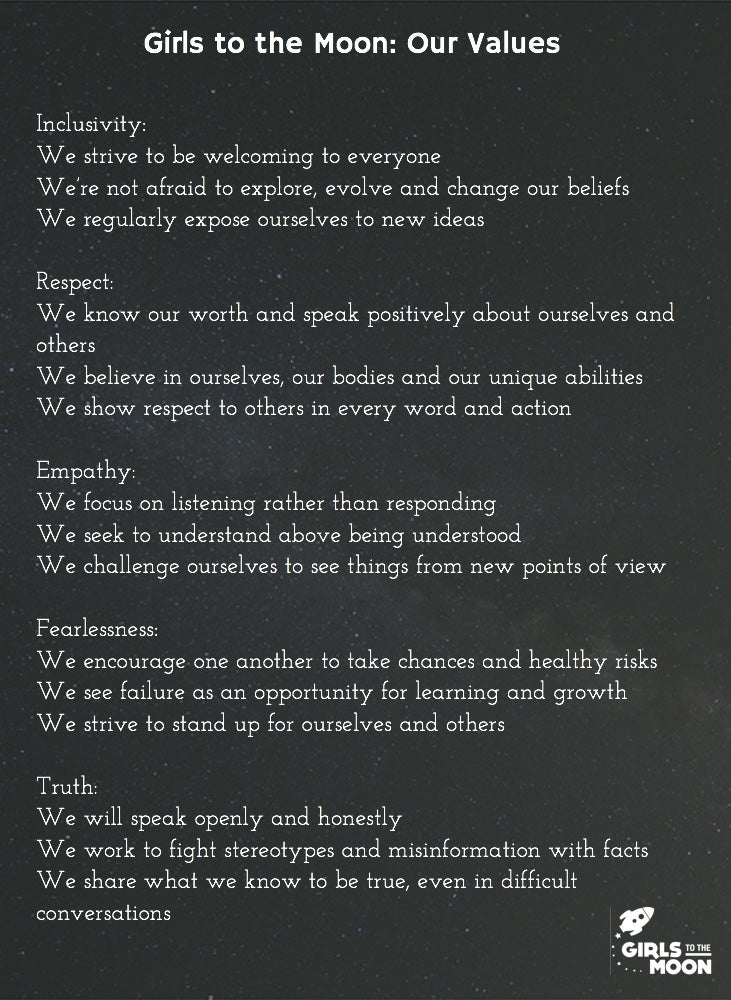 And being at Buffer has also shown me a great model for staying true to our values. When the rest of the Girls to the Moon team and I are faced with conflict or a challenging decision, we immediately go to our values for guidance.

2. Do the scary thing

One of the scariest moments in Buffer’s history was the decision to make all our salaries transparent -- not just to one another, but to the world.

And yet, that scary decision turned out to be pivotal, opening us up to big, important conversations about diversity and equal pay that continue today.

Doing the scary thing is why Girls to the Moon exists at all. It’s why we were audacious enough to make our very first project a day-long event for 300+ girls and their caregivers. It’s why we threw a party all about periods.

Related: How to Talk Pay and Negotiate a Better Salary

When you do the scary thing, you have no idea how your audience will react. But often, that’s what makes it so magical.

What do you think of when you hear the word “launch?” For me, it conjures up images of NASA’s mission control, with tons of people flying around in a frenzied countdown to the big button push.

But what if it could look as casual as this?

This is how Joel launched Buffer: Not with a giant, organized press push but with a mysterious tweet and a little note on a message board in 2010.

And it’s the exact opposite of how I would have approached things with my own startup if I hadn’t had the benefit of learning to do things differently.

Our founders certainly could have waited until everything was perfect -- every T crossed, every I dotted, every comma in place -- but how much further would we behind now as a company?

Especially when you’re still a small, unknown company, there’s no disadvantage to a soft launch, a friends and family launch, a beta launch -- as many launches as you want!

We’ve done all these launches and more at Girls to the Moon, and when we don’t hit the target we hand in mind or the goal we’ve set for ourselves, we simply iterate and launch again. Why not?

I’ll never forget an email I received when I first started to work on and share our diversity and inclusion efforts .

The writer shared that he didn’t have much of a need for our social media scheduling tools, but had signed up as a paying customer just because he believed so much in the work we were doing toward diversity and the way we were going about it.

It’s incredible to me to receive a message like that, and my inbox is filled with much more love and support on topics like transparent salaries, supporting nonprofits and more.

People want to see companies doing good, and they want to support them when they do.

Sixty-four percent of consumers with a brand relationship say shared values are the reason why they’ve engaged with a brand.

As our founder Joel puts it:

Knowing this early on has helped me in my side hustle immeasurably.

At Girls to the Moon, we made the decision to form a social enterprise company rather than a non-profit because we felt it was important to model the idea of making money while doing good. Our entire membership model is based on the idea that folks will see stats like these and want better for girls. And happily, that hypothesis is proving true so far.

A “bias toward action” is one personality trait that we look for in teammates, and I’ve been extremely lucky to learn from some first-class doers and makers.

Related: Understanding the Science and Psychology of Open Salaries

In practice, a bias toward action looks like moving fast, occasionally breaking thing and asking for forgiveness instead of permission.

And I’ve learned it’s absolutely essential for getting a side business off the ground. The same way Joel built Buffer in his bedroom on the side of other projects, my co-founders and I build Girls to the Moon on weeknights, the odd early morning hour and (always) Sunday afternoon wine-and-work sessions.

But when your time is at a premium, you’re forced to focus on only the most urgent priorities -- and knocking them out while you still have a tiny window of time to spare.

The rocks, pebbles and sand tasks that fill up your day are suddenly much clearer. 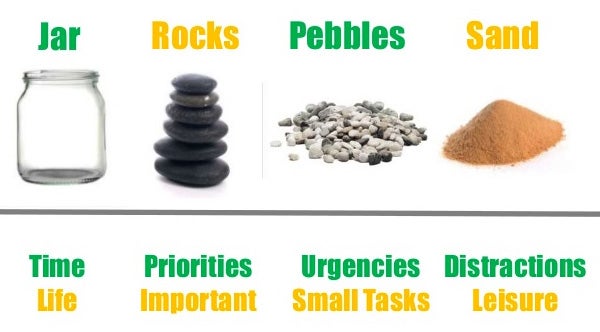