The survey asked Facebook users whether it'd be OK for adults to use the platform to ask a 14-year-old girl for sexual pictures.

By Michael Kan March 6, 2018
This story originally appeared on PCMag

Facebook made a rather questionable decision this weekend. For some reason, it asked whether users approved of the sending of pedophilic material on the platform.

According to The Guardian, Facebook issued the survey to a select group of users on Sunday.

"How would you handle the following: a private message in which an adult man asks a 14 year old girl for sexual pictures," the question asked. Respondents were given four answers, including: "This content should be allowed on Facebook, and I would not mind seeing it." 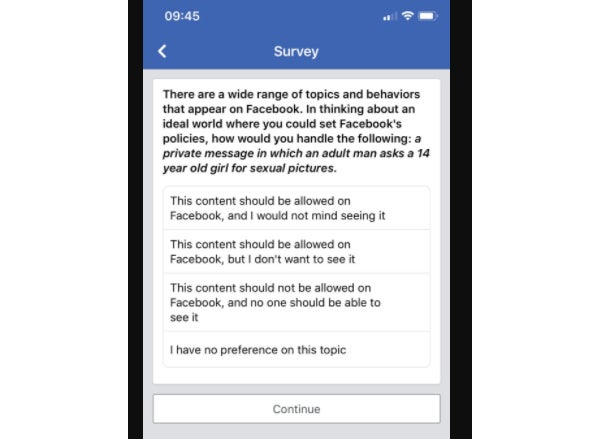 A follow-up question asked who should decide this Facebook rule. Answers included the company itself, third-party experts or the users.

However, the survey doesn't appear to point out that asking for sexual pictures from minors is illegal. Answers to the two survey question also fail to mention contacting law enforcement or child protective services as options, The Guardian said.

"I mean, this is not the kind of topic you should be determining policy on by surveying your readers. Facebook so out of touch with the real world," tweeted Jonathan Haynes, digital editor for The Guardian.

In response, Facebook called the survey a mistake. "We run surveys to understand how the community thinks about how we set policies. But this kind of activity is and will always be completely unacceptable on FB," said company's VP for product management, Guy Rosen, said in a tweet.

"We regularly work with authorities if identified. It shouldn't have been part of this survey. That was a mistake," he added.

It isn't clear how many users were exposed to the survey or in what regions. Facebook simply told PCMag: "We sometimes ask for feedback from people about our community standards and the types of content they would find most concerning on Facebook."

According to The Guardian, the same survey also asked similar questions about content that glorifies extremism, and whether Facebook's polices were developed in a fair, transparent manner.