The innovator and the beer-maker have joined forces to help everyone chill out during this stressful season.

There's nothing fun about Tax Day. It's stressful. It's annoying. It's enraging. It sucks.

Leave it to a beer company to try to turn your tax frown upside down. Stella Artois wants us all to stop investing our time and energy in being miserable this time of year and start investing in enjoying our friends, coworkers, family members and passions. They invented Stella Mutual, a fake mutual fund that will deliver real awards to people who sign up at @StellaArtois. Some of the prizes you can win include an "Instant Tax Refund" (a $2,500 cash prize), a virtual meeting with "Fun-ancial Advisor" Alexis Ohanian and "Stock Options" — a year of your beer fridge being stocked with Stella Artois. 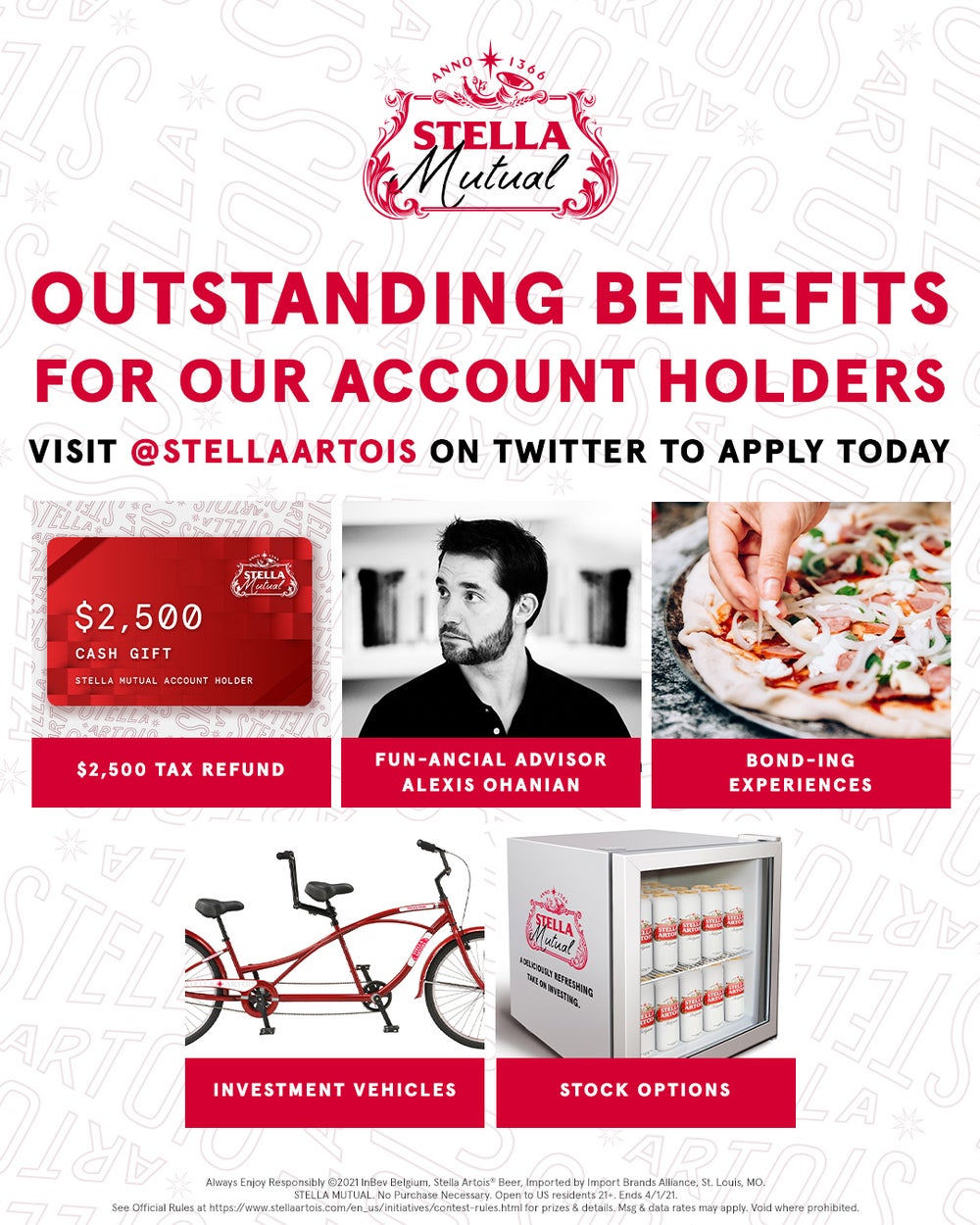 Fun-ancial adviser Alexis Ohanian, who is also the co-founder of Reddit and husband to one of the greatest athletes of all-time, Serena Williams, spent some time telling us why he got involved with this project on an upcoming episode of the Get a Real Job podcast. Here are a few excerpts from that conversation (which have been edited and condensed for clarity):

On the fallacy that non-stop hustling is a good thing

"I know I made mistakes in the early years of my career by glorifying hard work and long hours to the extent that it was just not healthy for me. There are some serious diminishing returns as you put in those extra hours of overwork. After a certain number of hours, if you're not reinvesting in yourself, invigorating yourself, you're doing worse and worse quality work. You lose touch with the things and people who really matter."

Related: Serena Williams Keeps Showing Us How to Rise Above the Noise

"Pretty early in the relationship, Serena said that I worked harder than her. And at the time, I immediately was like, 'Thank you very much!' And she looks at me and says, 'That's not a compliment.' Athletes know better than anyone because their work is as mental as it is physical, that recovery time is just as important as the time you're putting in practicing and or working."

On aspiring to wow his daughter

"I know our daughter is going to have total strangers coming up to her for the rest of her life telling her what an impact her mother made on them and on the world. And that's amazing, and rightly so. However, I'm very competitive and I want just as many people coming up to Olympia and having the same conversation about how great her dad is and what her dad did. I know I will never match just Serena's impact on the world, but I'm still going to give it a good try. And that's what fueled my decisions last year to step down in protest from the board of Reddit and start this new venture Seven Seven Six, which aims to bring great and positive innovations to the world."

The Theory of Natural Selection at Work

How to get rich with an apple seed