By Angela Moscaritolo
March 30, 2016
This story originally appeared on PCMag

Twitter is making images more accessible for everyone -- even the visually impaired.

You can now add descriptions, or alternative text (alt text), to images in tweets. This feature is available on Twitter's iOS and Android apps starting today.

"Photos have been at the center of some of the biggest moments on Twitter," staff engineer Todd Kloots wrote in a blog post. "As a core part of the Twitter experience, it's important that images shared on our platform are accessible to everyone." 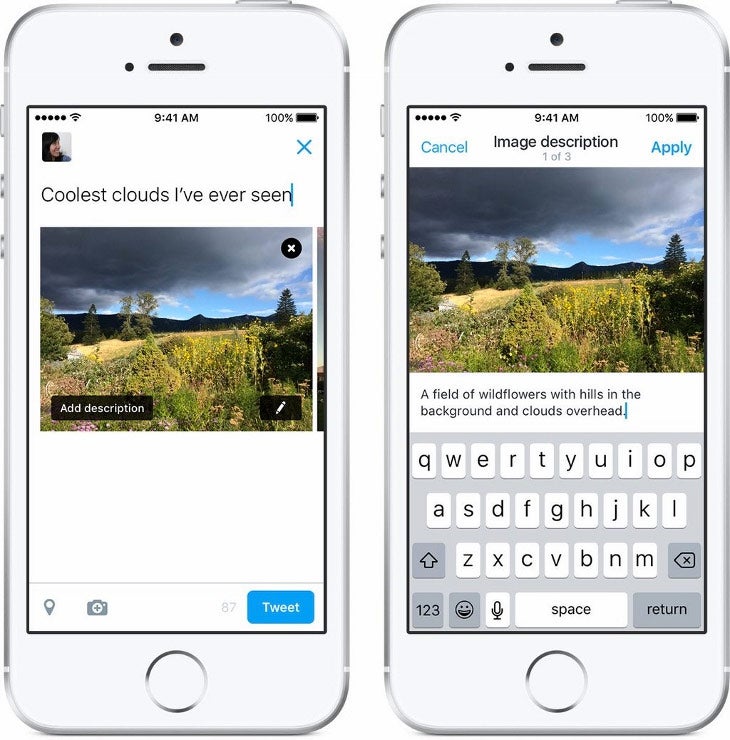 You can enable this feature via the "compose image descriptions" option in the Twitter app's accessibility settings. For instructions, head over to this support article.

Then, the next time you add an image to a tweet, you'll see an "add description" button, which will let you insert your descriptive text. Image descriptions are limited to 420 characters, so you'll have to be brief.

"We're excited to empower our customers and publishers to make images on Twitter accessible to the widest possible audience, so everyone can be included in the conversation and experience the biggest moments together," Kloots wrote.Visually impaired individuals will have access to the descriptions via assistive technologies such as screen readers and braille displays.

In other Twitter photo news, the company recentlybegan testing the ability to add stickers to photos, something Facebook rolled out a year ago. So far, however, the sticker feature is very experimental: Twitter has only reached out to a few users to get their opinions on how they might use stickers.