By Carol Tice
May 4, 2012
Opinions expressed by Entrepreneur contributors are their own. 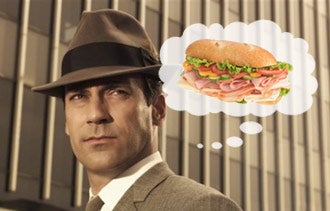 Great ideas are the stuff of which successful businesses are made. Without good ideas that customers respond to, on the other hand, your business is doomed.

That's the business drama on view in the newest reality TV show, AMC's The Pitch. In the show, two ad agencies compete for a chance to land a big account, while viewers get to watch their brainstorming process.

The challenge in the debut episode: Create an edgy breakfast campaign for top fast-food chain Subway aimed at luring young diners -- but don't go too far outside the bounds of Subway's established brand.

The show apparently had a tough time getting agencies to appear on the show, with many big agencies passing on the chance. It's easy to see why, as the show features both copywriters' harebrained ideas as well as their best. Fortunately, some agencies did sign on, providing a fascinating opportunity to see business teams who live and die by their ideas in brainstorm sessions.

The first episode features two name-brand firms, McKinney in North Carolina and WDCW, which has offices in Seattle and Los Angeles. The two firms get a brief from Subway together, and then regroup at their respective offices with a week to come up with their presentation.

Over at WDCW, which is known for quirky, attention-getting campaigns, the team presented an idea about zAMbies -- morning zombies -- who can snap out of their funk by eating breakfast at Subway. It was definitely creative, but ultimately didn't hang together. It was too out there for the Subway execs, who passed.

In the end, McKinney triumphed by being more tapped into youth culture. Setting two teams of its youngest junior copywriters on the project, one pair comes upon Irish rapper Mac Lethal, who's a YouTube sensation with a widely viewed video about pancakes. The team creates a video with him and brings him live to their pitch meeting, helping to clinch the account.

McKinney won a big account, but being in the ad business WDCW execs no doubt understood the law of publicity when they decided to make this show. Far from hiding after its loss, the agency is plugging its Pitch appearance on its website. No doubt it will be hearing from brands looking to do something real grabby that will keep viewers' fingers off the fast-forward button.

Bonus for those who'd like to know how the big companies tick: The show offers online "Why They Won" segments in which the company dissects why the winner got the account.

How does your company brainstorm? Leave a comment and tell us your approach.