Becky Bullard
March 12, 2012 min read
Opinions expressed by Entrepreneur contributors are their own.

Ask anyone who's ever attended the South By Southwest Interactive festival, and they'll be sure to mention the over-the-top outdoor promotions. Companies large and small vie for attention from the digerati, investors and other influencers converging on Austin for the annual conference. And over the years, they've become part of the scene where it's all about seeing and being seen. Here's a look at some of the standouts from this year. 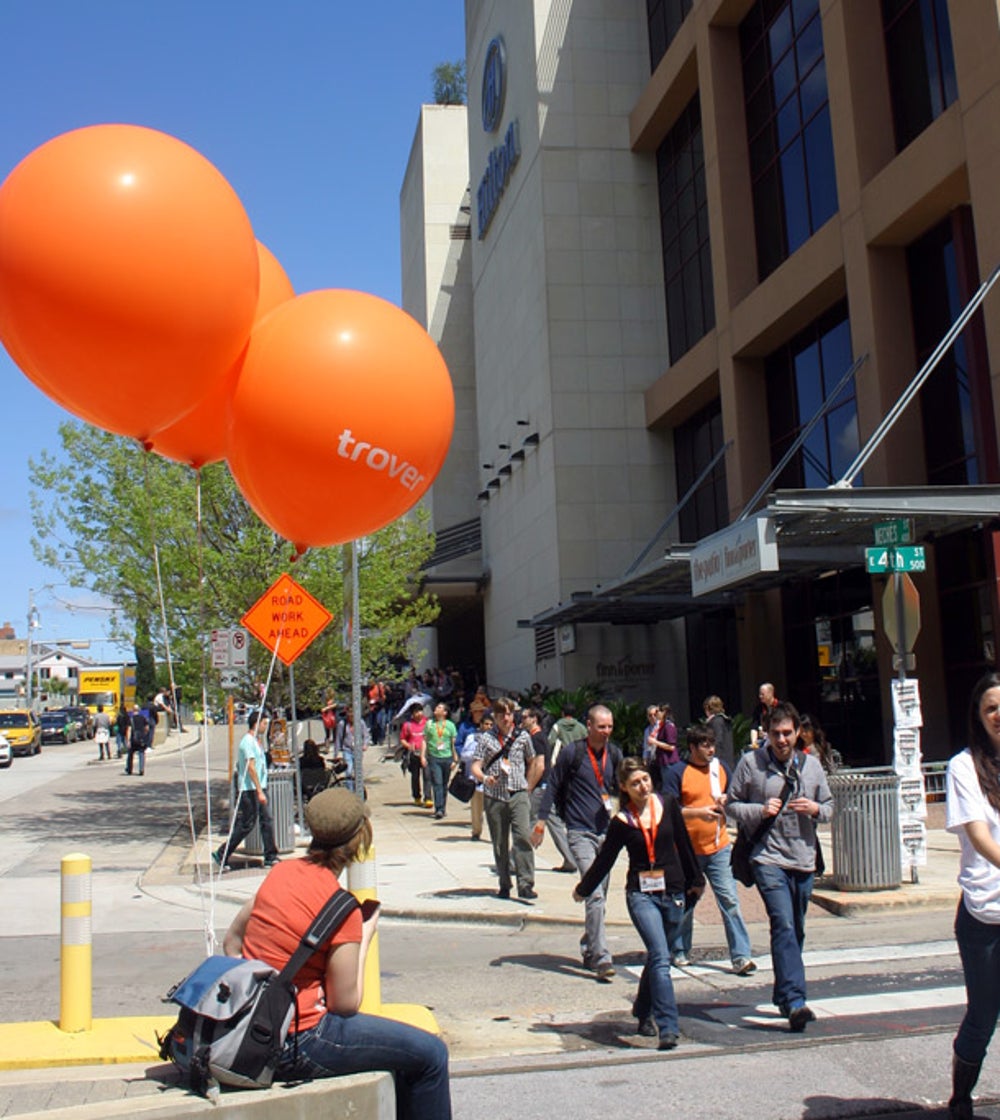 The pop of color from these huge, orange balloons is meant to attract the attention of conference attendees on their way between sessions. The location-based Trover mobile app offers a way for users to discover and share interesting things around them in a very visual way. 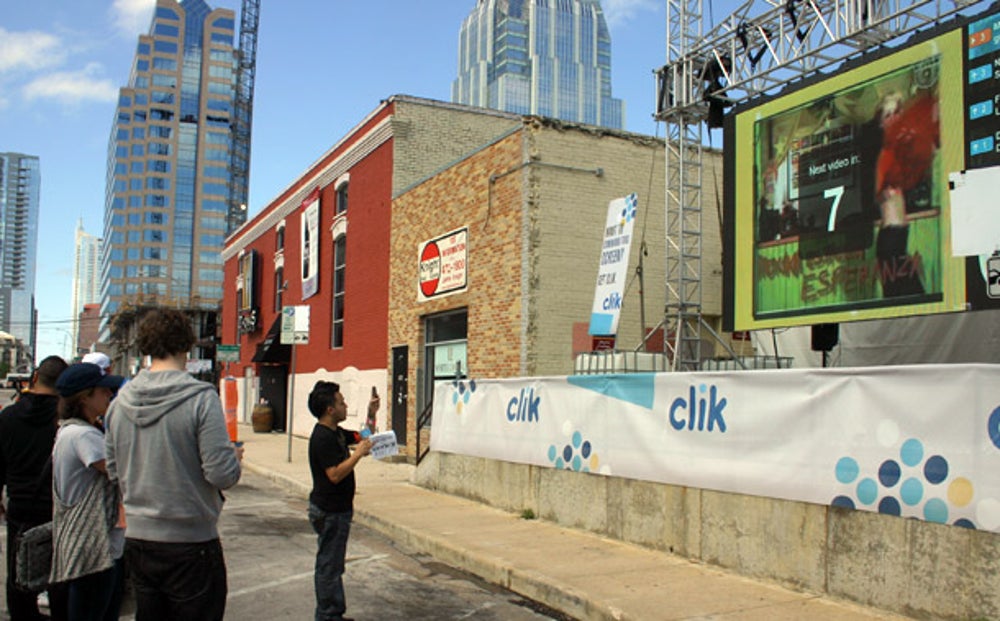 Clik set up this huge video screen outside the convention center to demonstrate their mobile app that turns smartphones into remote controls, enabling users to control any screen with a browser through their phone. Folks passing by the Clik screen can download the app to choose which music video to play next. 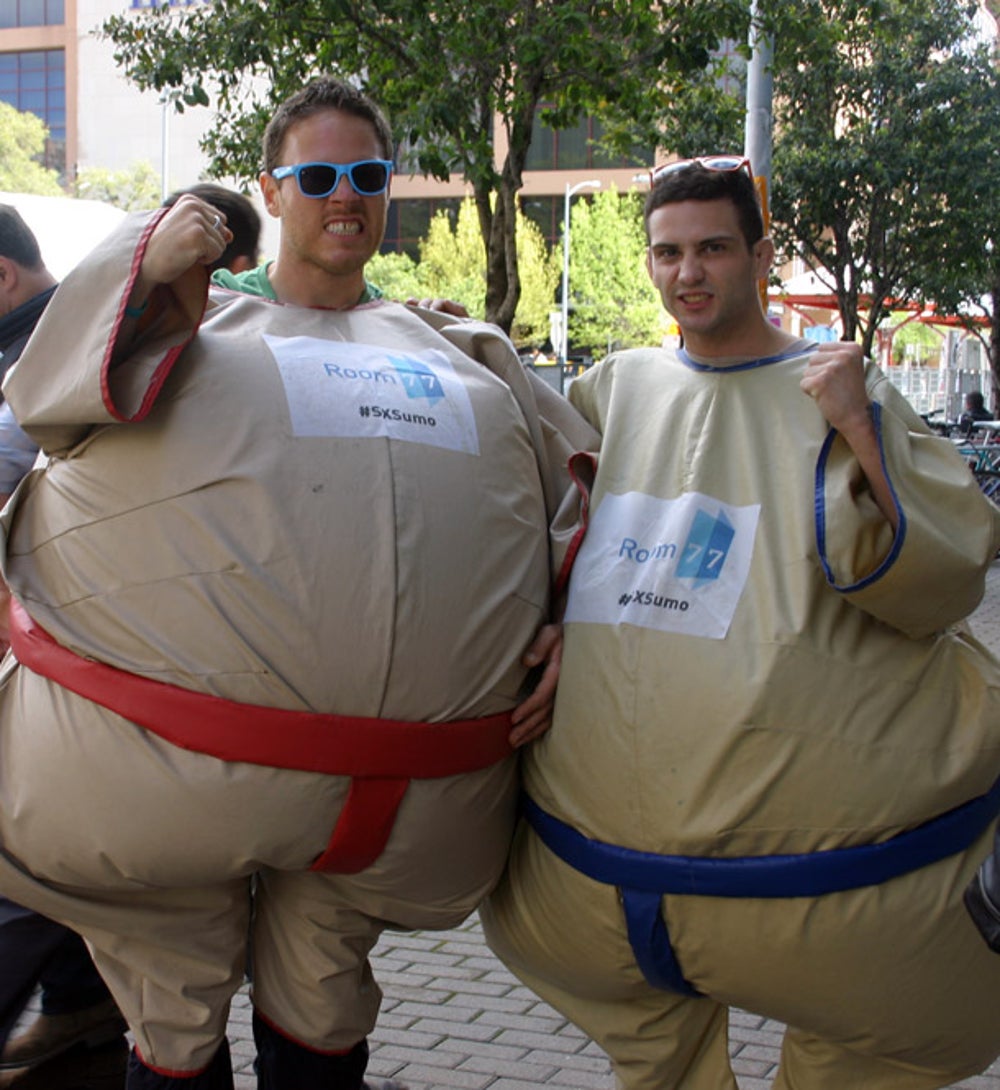 Two men in Sumo-wrestling suits encourage SXSW attendees to take a photo with them and tweet it out with the hashtag #SXSumo to be entered into a drawing for a free Las Vegas hotel room, courtesy of hotel search engine Room 77. 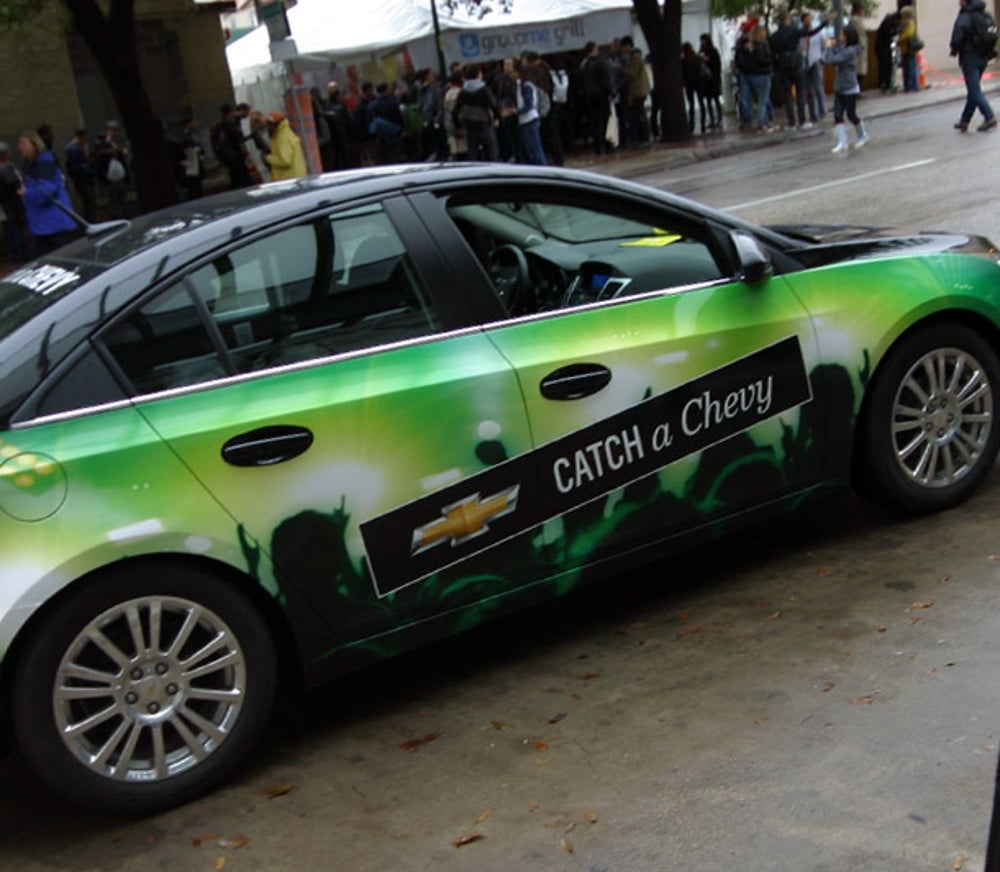 The "Catch a Chevy" promotion from festival sponsor Chevrolet has been a favorite at SXSW for the past few years, but conference attendees are especially grateful for the free chauffeuring service this year, which has earned the nickname SXSWet due to the steady rain. 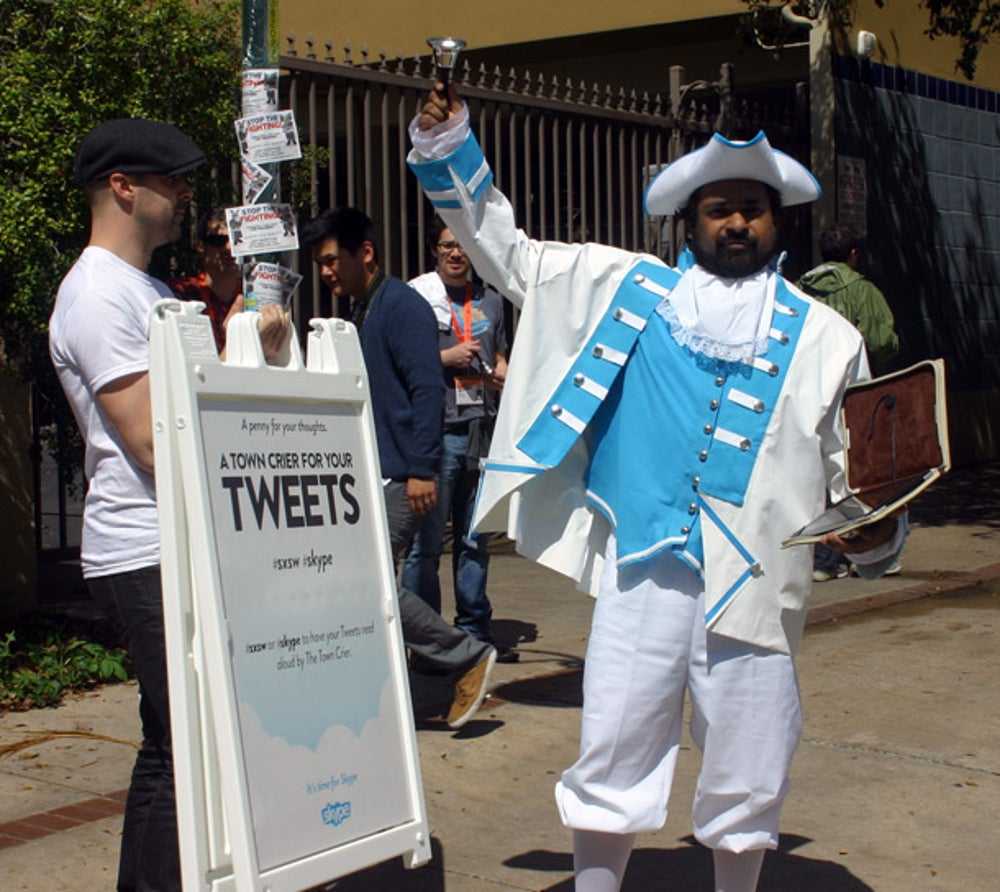 This creative, on-message promotion for Skype aims to re-introduce a little humanity among all the technology at the fest. Dressed in Skype-branded period attire and brandishing a bell, this gentleman reads aloud tweets with the hashtags #SXSW or #Skype from ye olde iPad to crowds gathered outside the convention center. 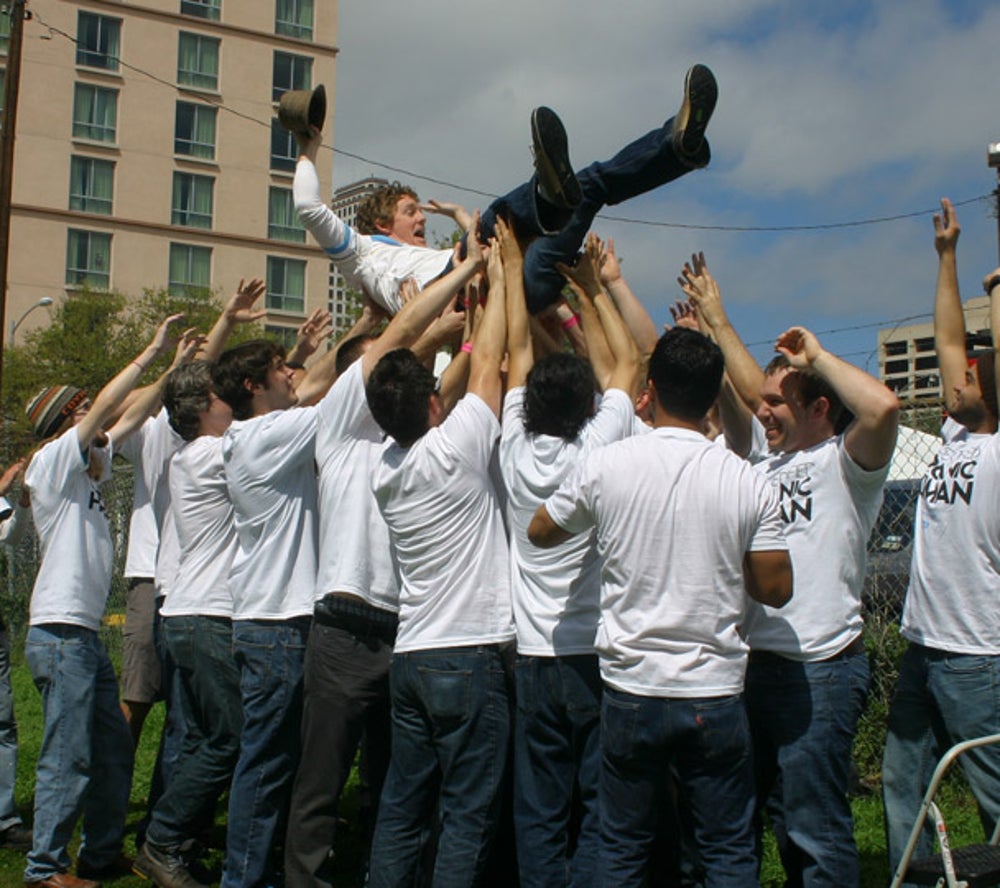 The best promos are always the most unusual. As part of Skype's mission to encourage human interaction, they are offering volunteers who agree to crowdsurf free VIP entry to their "Eat Drink Be Human" party with live music from bands RJD2 and Neon Trees, and free food and drinks from local favorite La Condesa. 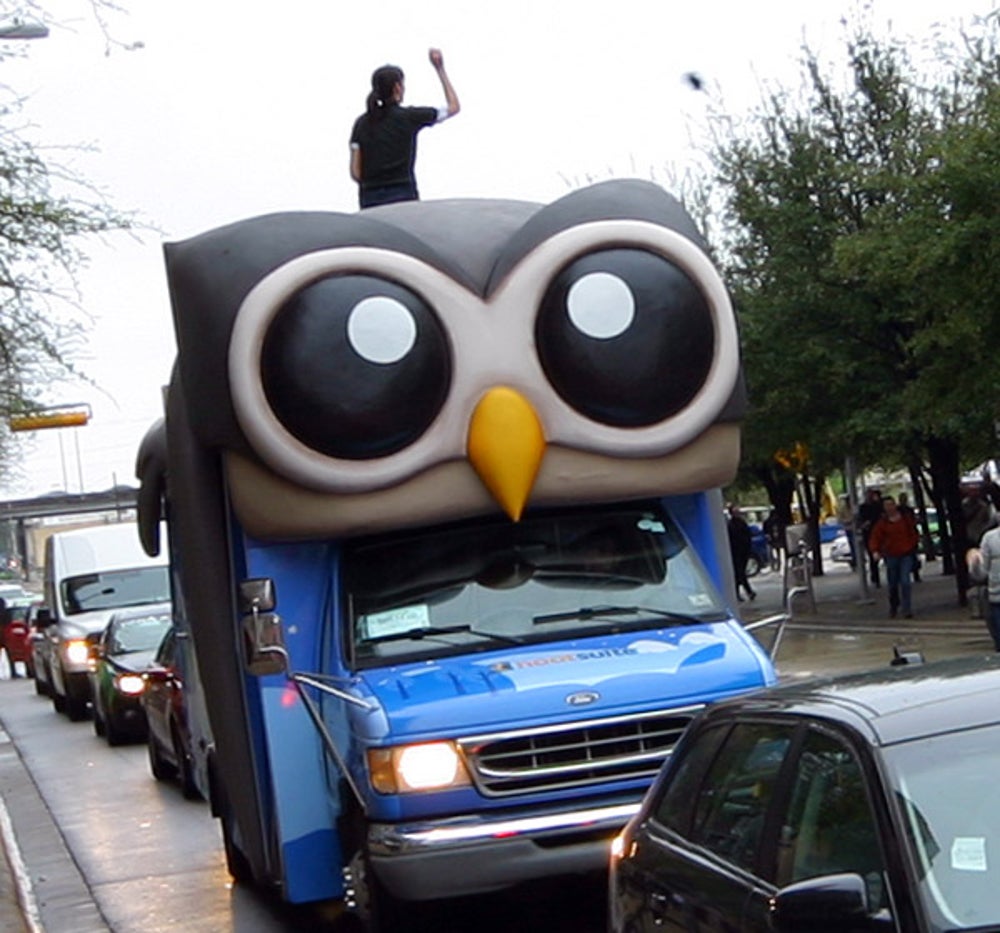 Mobile billboards abound at SXSW Interactive 2012, including this bus-turned-owl transporting HootSuite employees around the conference. Employees of the social media management tool perched on top of the giant owl (created by local Austin art fabricators Blue Genie) and tossed HootSuite-branded swag to fans on the street.

All You Can Eat 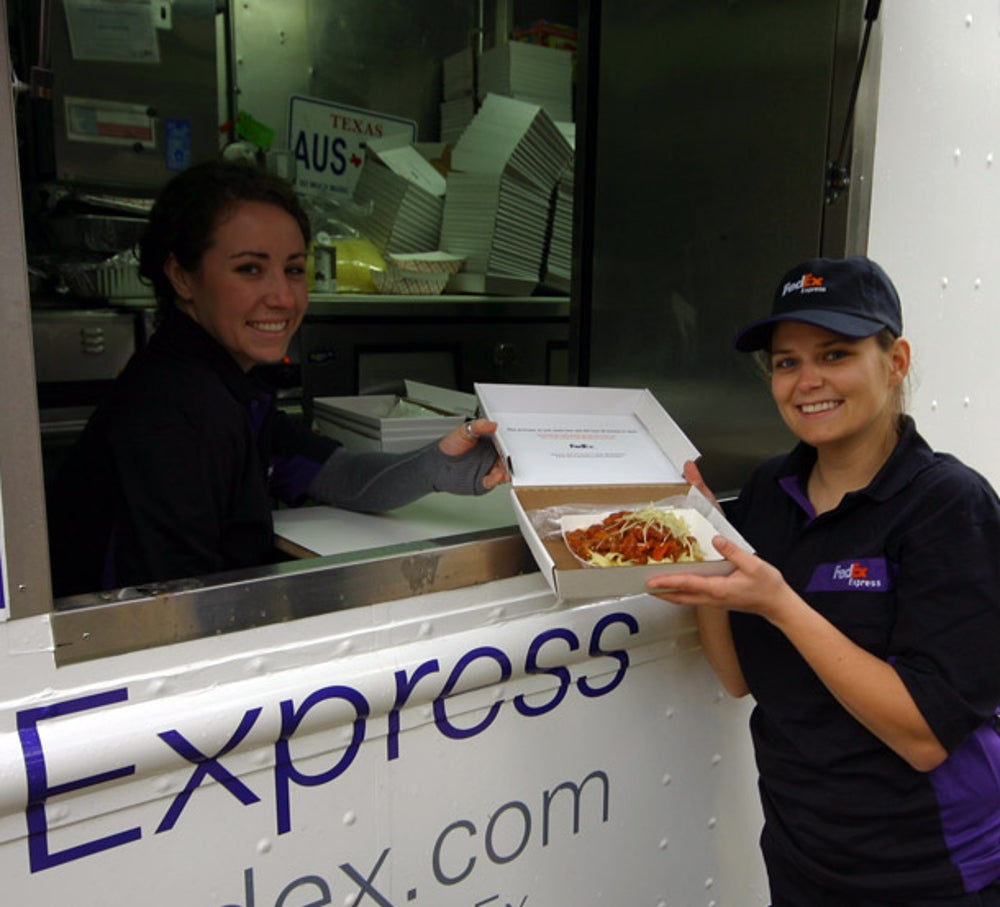 With very little effort, one can eat and drink entirely for free during SXSW Interactive, thanks to marketers hoping to get a little positive "word of mouse" for their generosity. These friendly FedEx delivery personnel served up free pappardelle at various spots outside the Austin convention center. 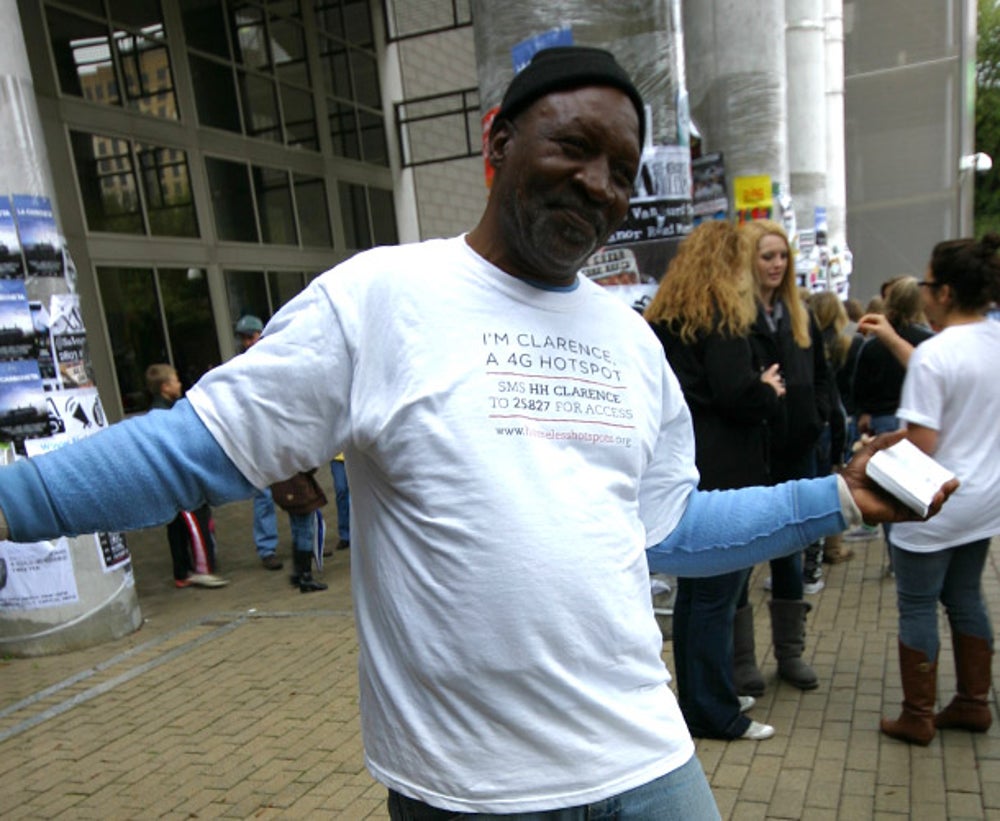 It's impossible not to smile walking past Clarence, the 4G hotspot. With tireless enthusiasm, he tries to sell passersby on the mobile 4G service he's offering as part of a program called Homeless Hotspots, a charitable initiative of multimedia communications company BBH New York. 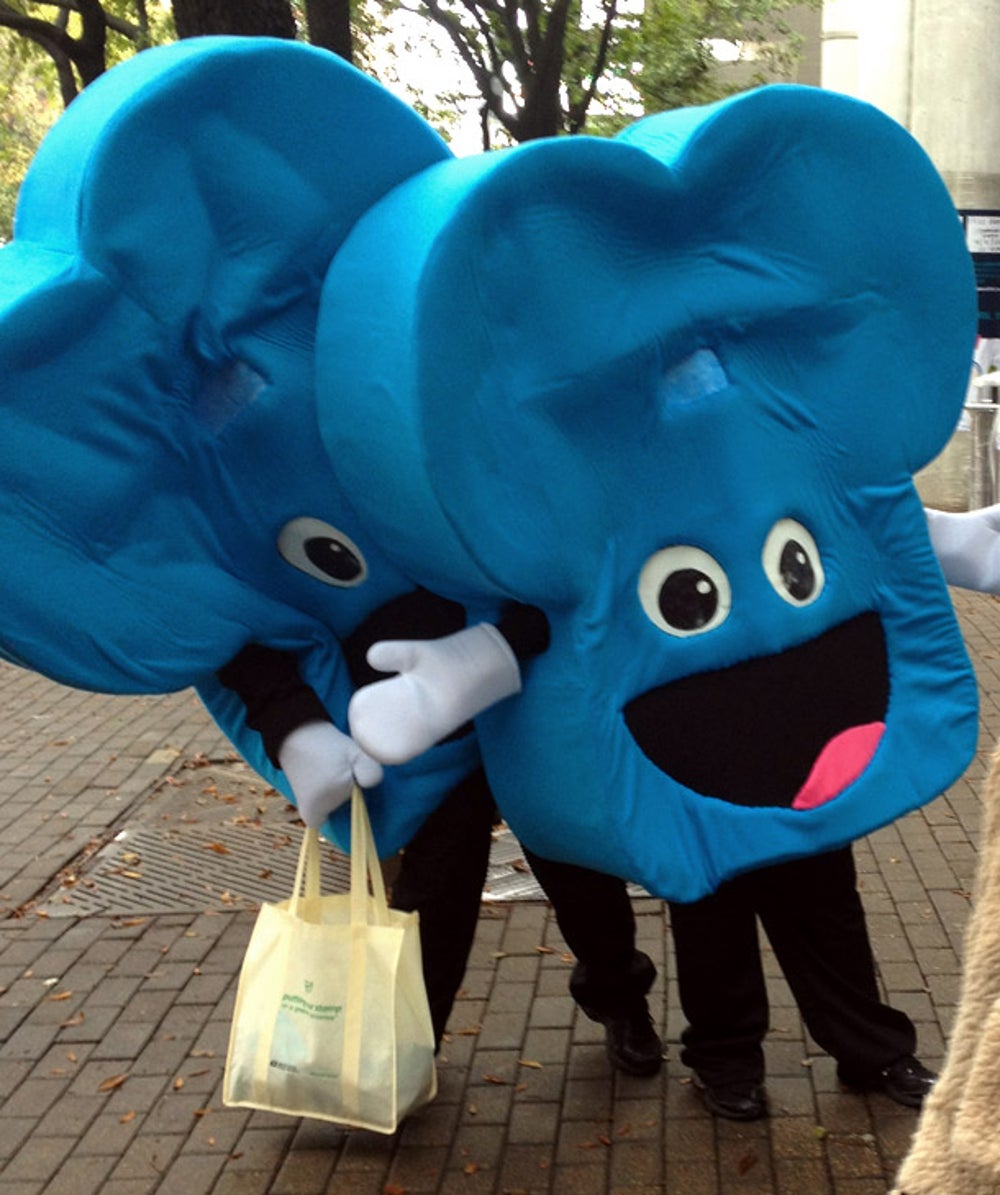