Snow storms, gingerbread cookies, holiday tunes -- there are many staples that give you that warm “holiday feel.” And for many of us, holiday windows are among these, especially in New York City. For years, people from around the globe flock to see what department stores will unveil in their winter windows, while retailers look to entice people to buy.

This long-standing tradition of holiday window displays dates back to the late 1800s when retailers started popping up in big cities across the States. Windows became crucial for these large retailers trying to compete against one another -- and it still is.

Related: If You Aren't Already Prepping for the Holidays, You Should Be

Merging a decorative display with merchandise, department stores today use their window displays to build foot traffic and boost sales, which can help combat competitors in the ecommerce space.

And with holiday shopping accounting for over 22 percent of annual sales for retailers in 2014, it’s no surprise that retailers go above and beyond with their window decor. As this number is only rising, the National Retail Foundation forecasts holiday sales to increase by 3.6 percent this year.

In the Big Apple department stores pull out all the stops to attract customers -- and rightfully so.  As a major tourist hub, New York City had 58 million tourists in 2015, according to NYC & Company, an organization that promotes tourism in the five boroughs. This number is predicted to grow to 60 million this year, with 5 million expected between Thanksgiving and Christmas Day alone. Combine tourism with the holidays and retailers have their perfect scenario for booming sales.

Tiffany’s, Henry Bendel, Macy’s and others are known for their extravagant windows during the holiday season. But you don’t have to be a major retailer in a huge city to create talked-about holiday windows. Indeed, with some collaboration with other local retailers, your community can have a bustling holiday push of its own. You just may need a bit of inspiration from the big guys.

Check out the seven best holiday windows in the Big Apple and what you can learn from them.

Related: The 6 Musts of a Successful Holiday Marketing Campaign 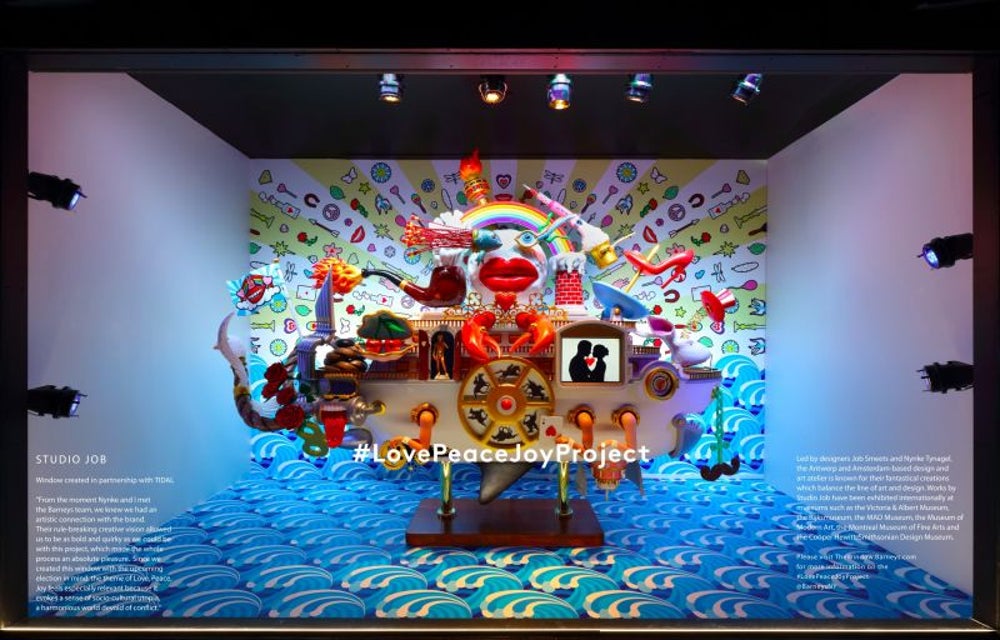 In one window, you’ll see smiling characters of South Park coming together with gifts and toys. In another, you’ll see a space filled with colorful mannequins and tropical shrubbery, where projected onto the mannequins are patterns and faces. Every window is different but they each embody the common theme of “Love, Peace and Joy.”

Barneys creates conversation about its brand and efforts of giving back, while also engaging consumers and getting them to participate. Participation is key to brand building and getting consumers to pay attention and act.

Remain true to your brand. 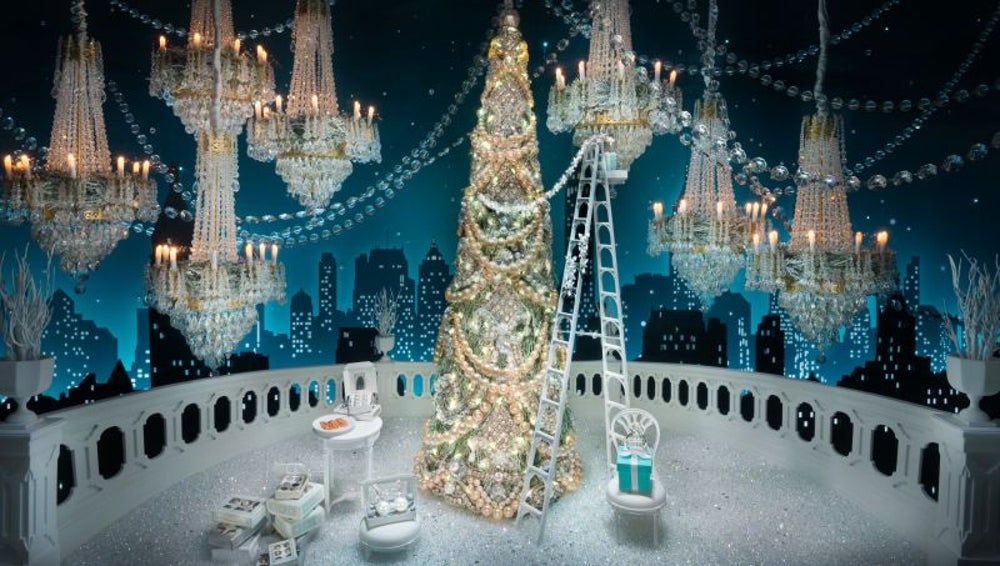 Tiffany & Co. approaches the holidays with elegance and grace -- co-aligning with its reputation as a beautiful jewelry brand. Opening the holiday season with windows that depict a Tiffany New York Christmas, the company captures the charm of the city during the holidays, meanwhile incorporating its own take.

The displays feature scenarios around New York City -- a vignette of Rockefeller Center and its massive Christmas tree, the Manhattan skyline over the Hudson River, a picnic in Central Park with jewel-filled foods. Tiffany uses its traditional holiday windows to incorporate what its brand represents, as well as its products.

Each scenario is bedazzled in Tiffany jewels, or incorporates a product into the scene. By using its own products within the displays and by staying consistent with its brand through color scheme and the idea of luxury, the Tiffany windows are masterpieces of branding and storytelling.

Show what you can offer. 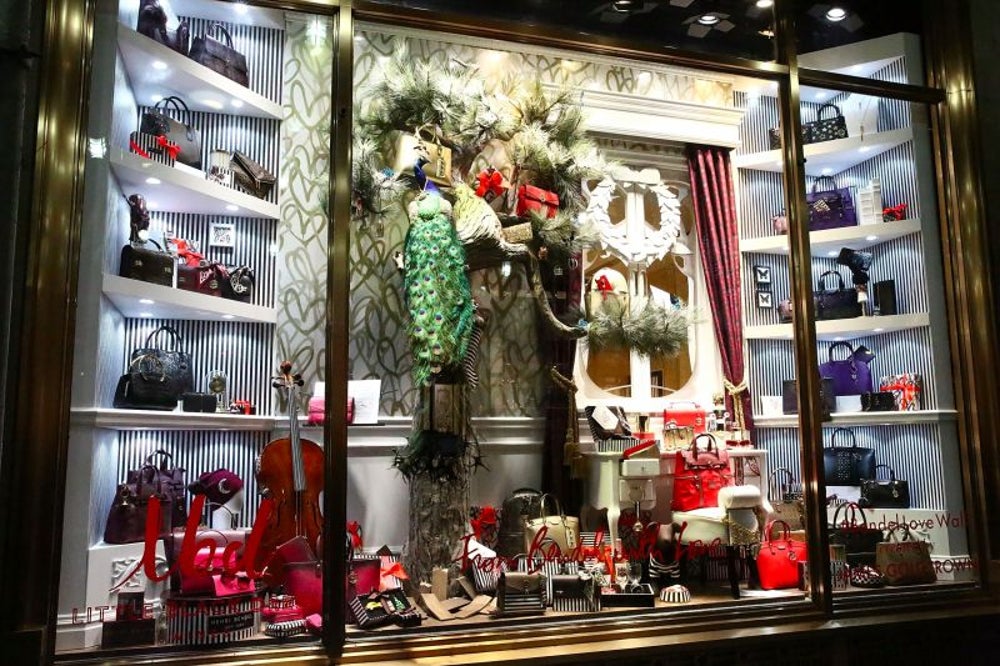 With the holiday season, comes shopping. For retailers, this means sales. And what better way to market your products than to immerse them into your holiday windows? Retailer Henri Bendel uses the seasonal opportunity to create displays of luxurious rooms filled with purses, shoes and accessories galore.

The company’s “From Bendel with Love” windows merge the holiday theme of love with its products. Using the displays to show passersby what they could potentially purchase, the company takes more of a marketing approach to its displays. By strategically placing these giftable items in its windows, the company pushes to get people into its store and shopping.

Related: 14 Awesome Holiday Gifts Even Your Boss Will Love 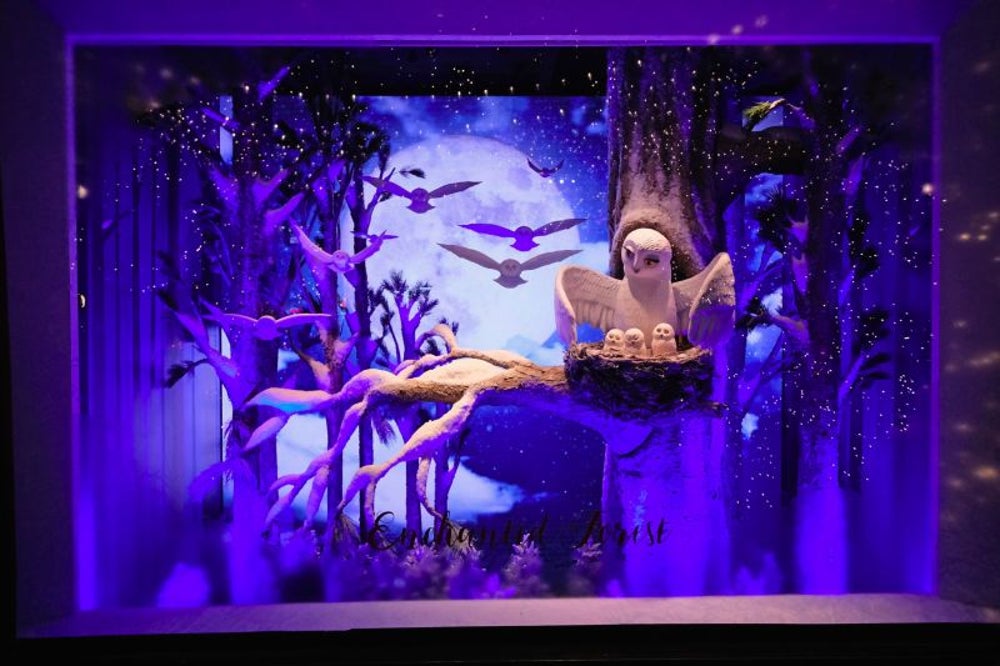 Lord & Taylor kicks off the holiday season with its 79th annual holiday window display. Through its “Enchanted Forest” windows, they take customers on a journey with them.

The Fifth Avenue flagship features five windows of winter wonderlands filled with 34 hand-sculpted holiday animals, and LED walls illuminating the scenes. From slumbering foxes to dancing raccoons to ice-skating bunnies -- Lord & Taylor creates a magical holiday experience for anyone walking by the windows.

Going to great lengths to connect with consumers and boost holiday spirit, the major retailer strives to create a personalized experience. These consumer experiences not only attract the eyes of passerbys, but consumers begin to develop their own relationship to the brand -- a key factor in gaining a loyal audience.

Stay ahead of trends and incorporate technology. 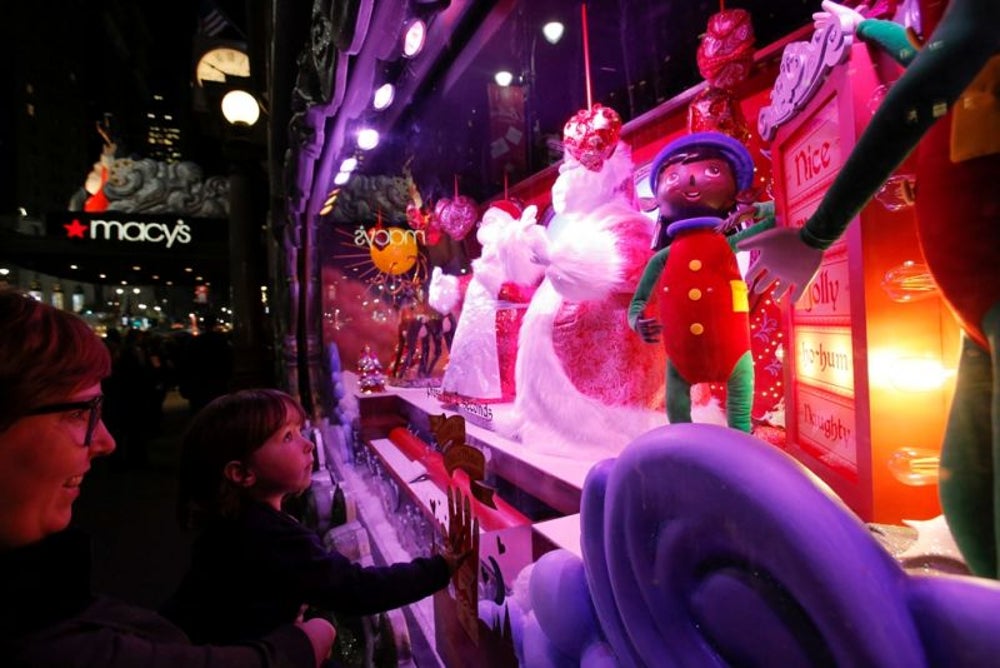 Today, technology is a major element of many holiday window displays. For Macy’s, understanding how people interact with technology and how they receive information is a key component to its windows.

This year, Macy’s flagship in Herald Square revealed six eye-catching windows based on the theme “Believing the Magic,” in which people celebrate the “magic of the holiday season.” Each window has its own sub-theme like “Together,” which features a family tree sculpted with 1,500 hand-made crystals and “Celebrate,” which shows a Macy’s Parade 90th Anniversary pinball machine.

Also, to incorporate an interactive, technological element to its windows, one window features working elves in Santa Claus’ “communication center” where kids are sending in their Christmas lists. Although rather than by mail, the elves are going through YouTube videos that children have sent in of their lists. In Mr. and Mrs. Claus’ “Love” window, there is an LED screen attached to the outside of the window. A person places her hand on the screen, the screen measures the warmth of a person’s hand and will tell them if they’ve been naughty or nice.

Stick to a theme. 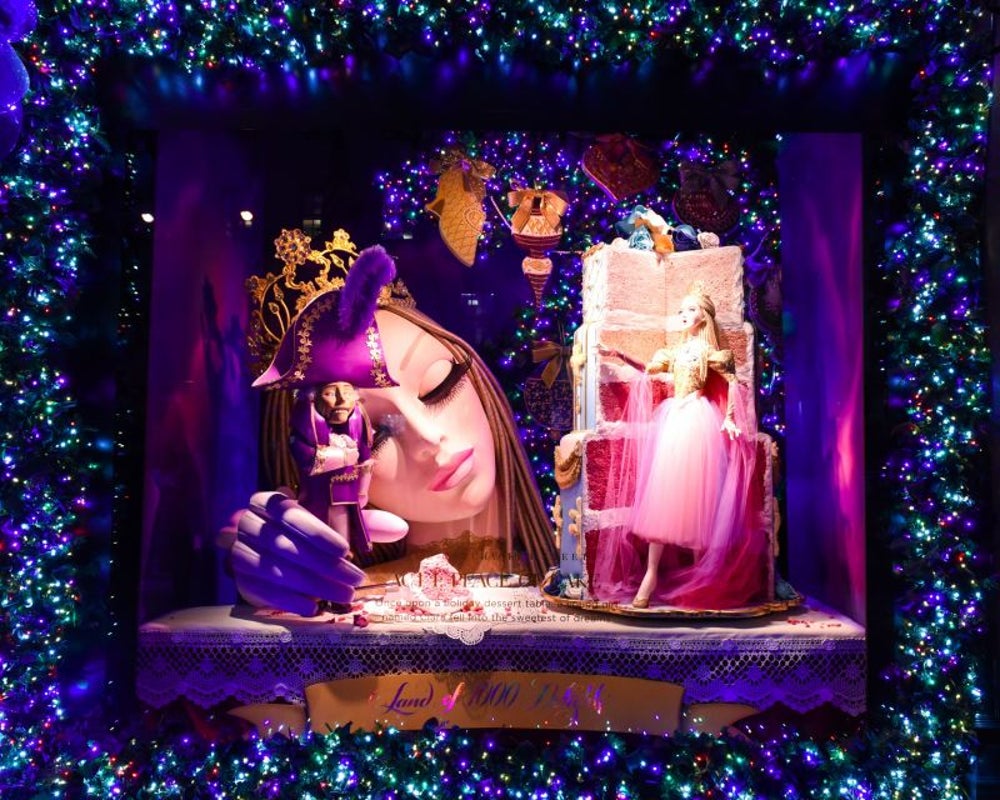 Saks Fifth Avenue kicked off the holiday season with an unveiling event, featuring a massive light show and a ballet performance of “The Nutcracker Suite” while they revealed its holiday windows “Land of 1,000 Delights.”

Saks windows feature magical landscape of colorful candy and winter fashion. Saks’ Fifth Avenue flagship cleverly calls its six center windows “The Nutcracker Sweet,” where characters from the ballet, Clara and the Mouse King, are featured in a candy wonderland.

Focusing on one theme, but creating a variety of different scenarios and sub-themes, people were enticed by Saks’ windows this year. 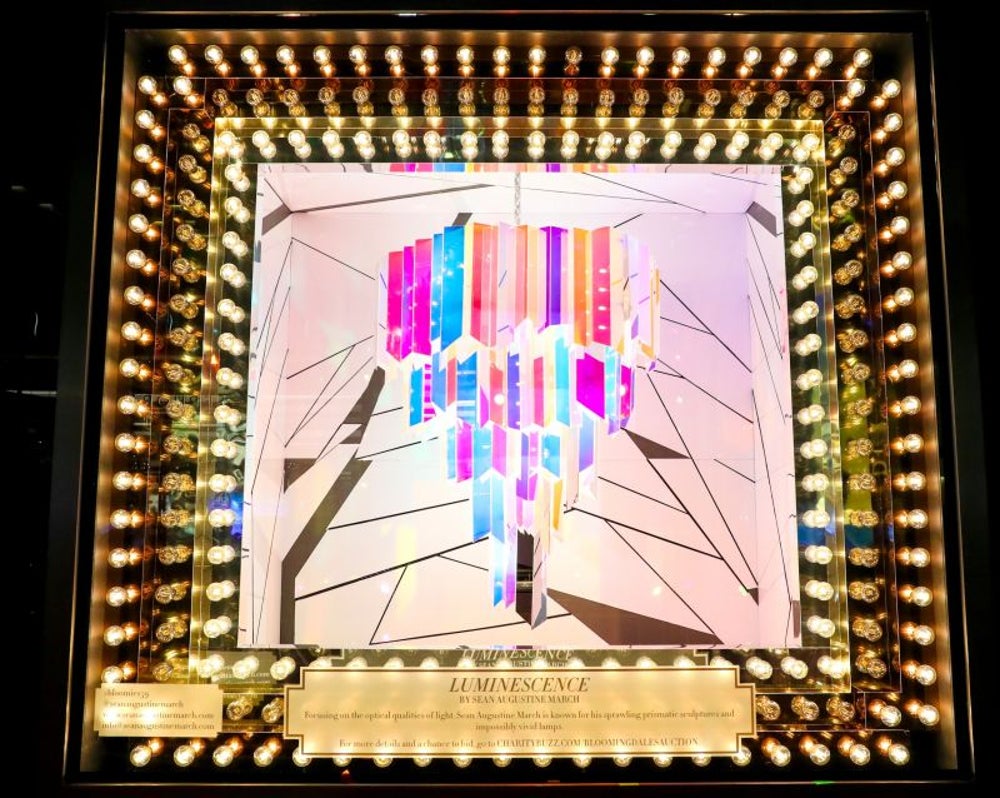 Bloomingdale’s takes a philanthropic approach to its windows this year with its “Light Up a Young Mind” holiday displays.

Partnering with visual artists, eight chandeliers were commissioned exclusively for Bloomingdale’s, which are featured in its windows and will be auctioned off to benefit the Child Mind Institute.

From sculptor Imma Barrero who combines clay, metal, glass and wood into his pieces to glass artist Allison Eden who’s known for wild patterns and bold colors -- each window has a different approach as the artist express its own views of the theme “light.”

The auction is hosted on Charity Buzz, which is a great resource that provides extraordinary experiences to benefit a variety of charities.

As a small business, if you don’t have the resources to host an auction, try out other tactics like promising to donate a percentage of every purchase to a charity, and express this through your window displays. This will drive people into your store and they’ll be happier to buy knowing their money is going to a good cause.

How to Keep Your Team Energized During the Holidays

Want to Make the Holidays Special? Send a Personalized Message From Santa.

If You Haven't Already Done These 7 Things to Prepare Your Business for the Holiday Season, You're Putting Your Business Behind the 8-Ball

Masked Santa Emerges as a Holiday Hit for These Brands

How To Pivot Your Corporate Gifting In 2020