Check Out the Coolest Cars and Concept Vehicles at CES 2018

The auto industry is stealing the show with smart features, self-driving and more.
Next Article

If you want to see what's hot at CES, look no further than the North Hall of the Las Vegas Convention Center. Its floor plan this year is, without exaggeration, 90 percent cars.

Indeed, CES is becoming more and more of a cornerstone for players of all sizes in the auto industry. If you sort the CES exhibitor directory by the "automotive/vehicle technology" category, it serves up 555 results.

Because it's a technology show, CES is the ideal place to showcase vehicles with new sensors, software and screens. Autonomous vehicles are gaining serious momentum, at least from a development standpoint. There's still a long way to go before they're ubiquitous on the roads, though a handful of companies, including Torc Robotics as well as partners Lyft and Aptiv are offering (human-assisted) rides in them in Vegas this week.

Beyond self-driving, vehicles are getting smarter and offering a range of features designed to boost safety, connectivity and personalization.

For a look at some of the coolest cars and related tech on display at CES 2018, click through the following slides.

Related video: Catch a Ride With Lyft in a Self-Driving Car at CES 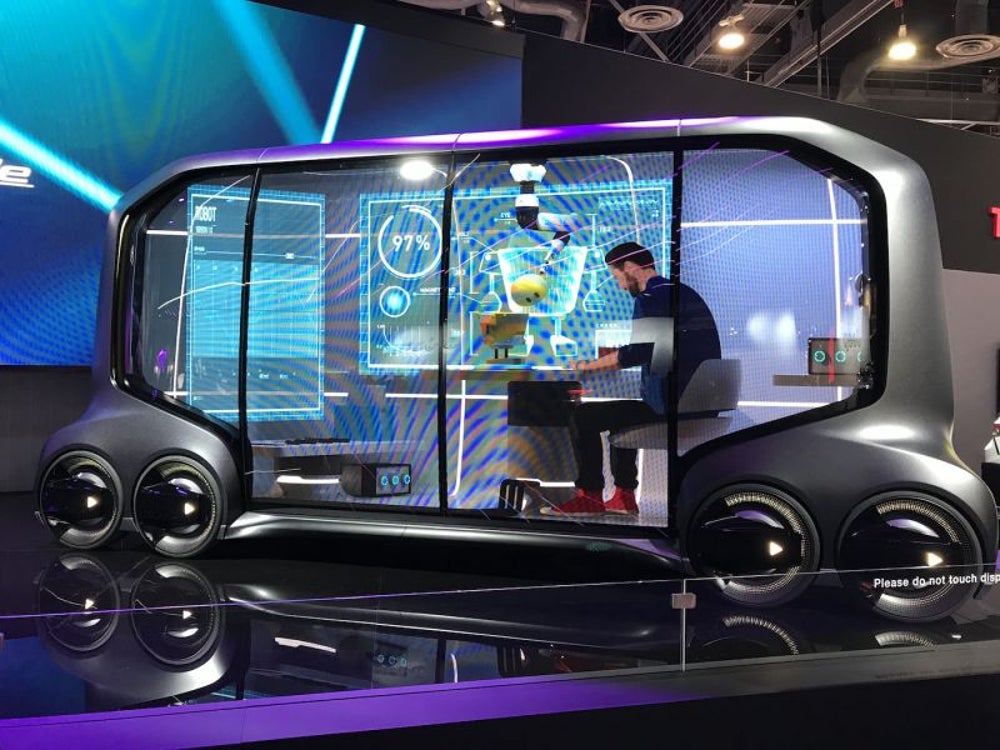 Toyota announced the e-Palette self-driving electric concept at CES this week, as well as a partnership with Pizza Hut that could one day result in the vehicle pictured above not only delivering pizzas autonomously, but bake it as well.

And pizzas are just the beginning of what this “platform" as Toyota refers to it, could do. It could be any kind of autonomous store on wheels, switching functions in a matter of less than 24 hours. The photo above depicts a “fab lab” concept.

Along with Pizza Hut, the company announced Amazon, Didi, Mazda and Uber as launch partners. Toyota will begin testing the e-Palette in the U.S. beginning in 2020.

Byton: the new kid on the block 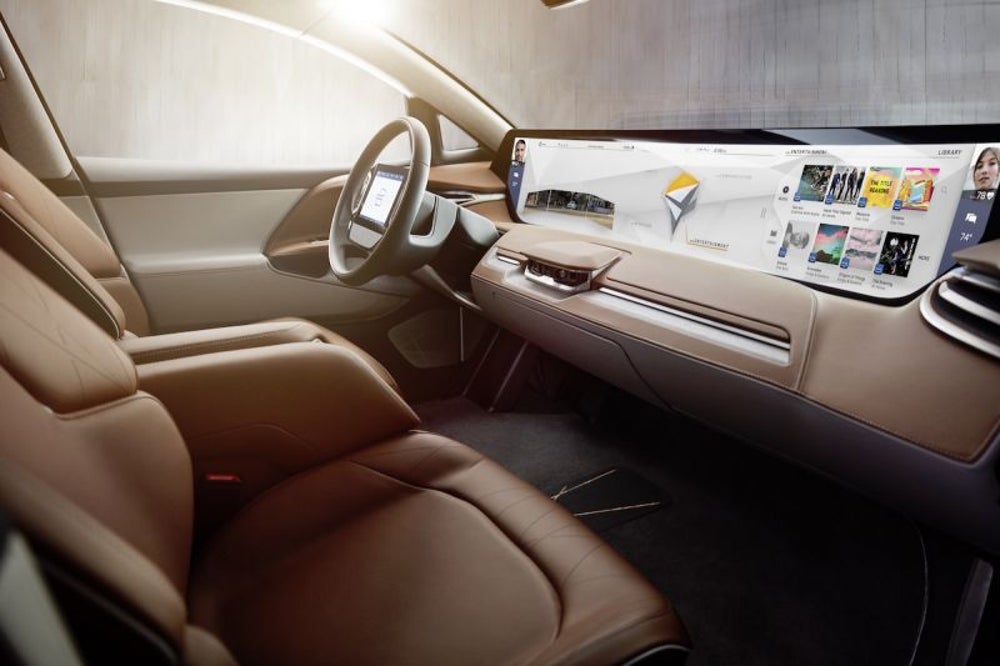 Two-year-old startup Future Mobility Corporation claims its first vehicle, Byton, is 85 percent production-ready and slated for a rollout to the Chinese market late next year. The vehicle is generating buzz at CES, given that it scored a press conference slot on the first CES media day (Jan. 7) and is a unique and impressive development toward a driverless (someday) and connected (as the 5G era draws nearer) future of mobility.

The car's defining feature is its 49- by 10-inch dashboard display, which users can control using gestures, not touch. The steering wheel also has a screen with facial and emotional recognition capabilities, and passengers will supposedly be able to enjoy entertainment, conduct video conferences and even monitor their vital signs via the software platform Byton is developing. For more information about Byton, check out Entrepreneur's interview with CEO Carsten Breitfeld here.

Another Toyota vehicle because it’s just so out there 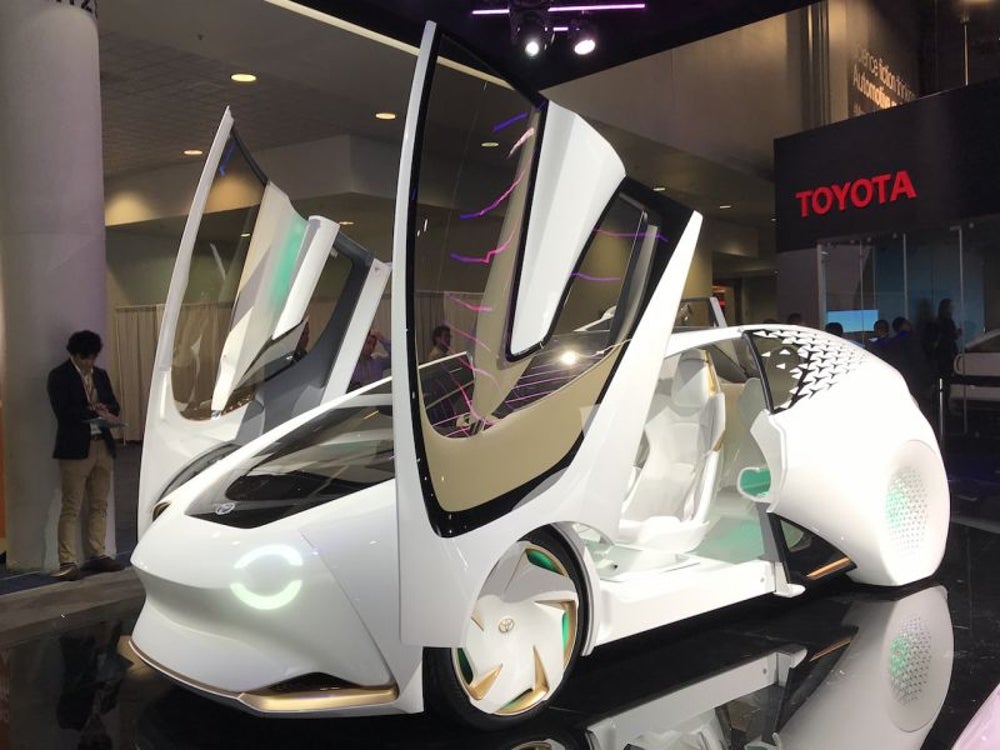 The eye-catching Toyota Concept-i premiered at CES last year, but it’s back on the floor this year. Its key feature is an AI assistant named Yui, which is designed to get to know drivers and keep them engaged. Yui can even wink via the headlights. Voice recognition technology opens the scissor doors, and features such as a large sunroof and bucket seats in the back round out the sleek design. There’s also a steering wheel to emphasize that, since fully autonomous driving is not yet possible, safety is paramount. 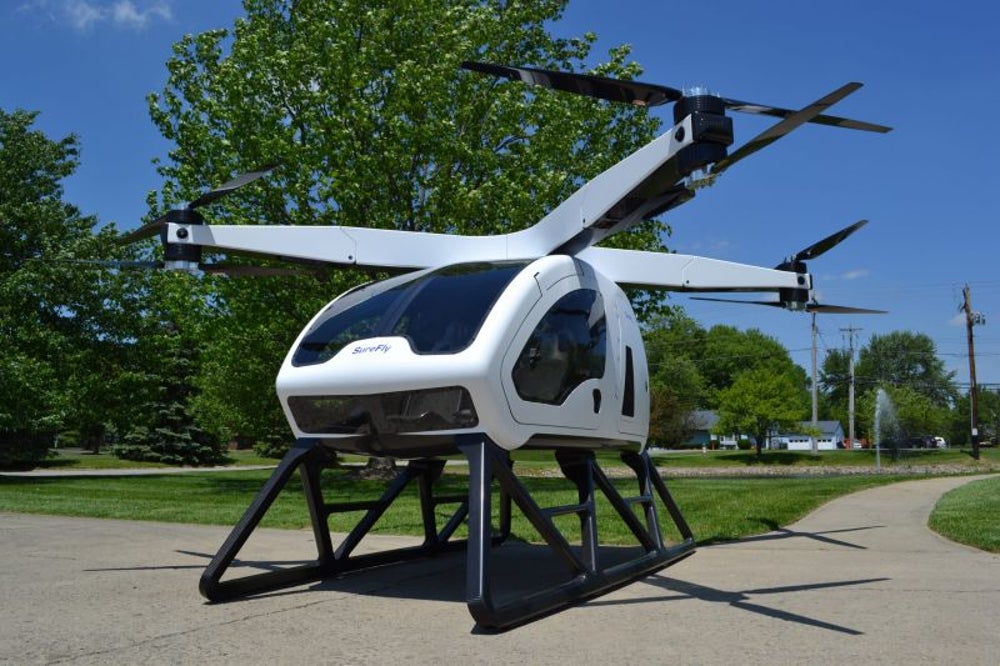 The compact helicopter (or “octocopter,” because of its eight propellers) is the creation of Workhorse Group and is meant to be safe, easy to fly via joystick and (relatively) cheaper than your average chopper. It’s designed for a variety of uses, from agriculture to emergency response to urban transportation. The company recently announced it will spin off SureFly into its own business, and production will begin on the vehicles in 2019. Then the next step will be autonomous flying.

Related: Why CES Is Now the Greatest Car Tech Show on Earth

Another Ford partnership for self-driving research 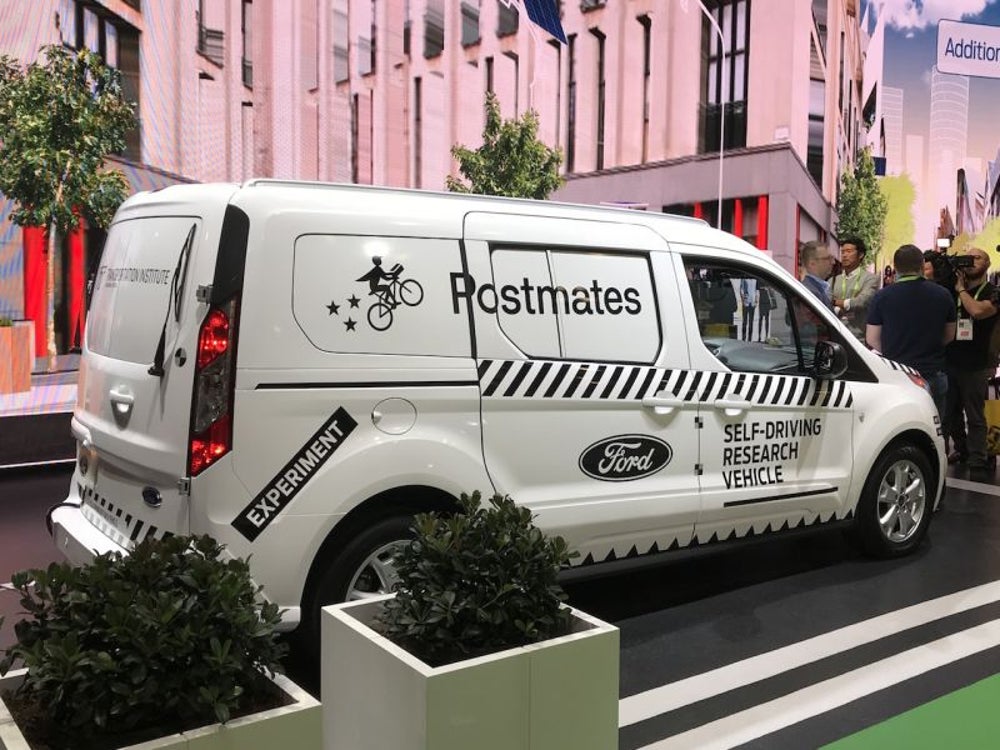 Ford Motor Company CEO James Hackett delivered a keynote the morning of Jan. 9, the official opening day of CES. Among his announcements was a partnership with delivery service Postmates to research the potential of autonomous vehicles for more efficient on-demand deliveries. This collaboration follows a program with Domino’s Pizza to fulfill deliveries via self-driving Ford Fusion vehicles in Ann Arbor, Mich. (That research vehicle was also on display at Ford’s booth.)

"With the knowledge we'll gain from our partnership with Postmates, we anticipate we'll be able to better deploy self-driving technology in a way that can help people get what they need faster, while also supporting local businesses that are a big part of communities around the world," the company wrote in a Medium post in conjunction with the announcement.

Other Ford news includes plans to launch a service that will grant other companies access to fleets of self-driving Ford vehicles, as well as the development of smart cities technology that will connect vehicles to each other and their surrounding infrastructure.

The classic hippie van upgraded with an ‘AI co-pilot’ 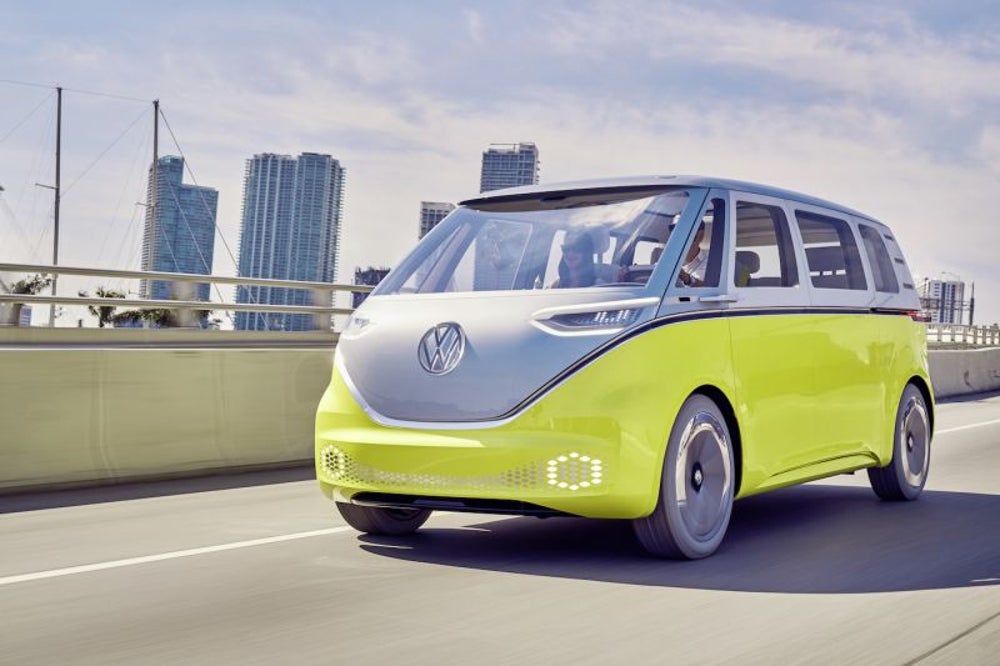 In partnership with Nvidia, Volkswagen is developing a new AI-enabled vehicle called the I.D. Buzz, a smart, electric, autonomous take on the old VW bus that is slated to be ready for rollout by 2022.

The goal of incorporating deep learning technology from Nvidia is to allow the vehicle to become familiar with driver and rider preferences as well as achieve safe autonomous driving. Features will include unlocking via facial recognition, bicyclist detection and alerts, gesture controls, voice commands and more.

In 2015, the U.S. Environmental Protection Agency discovered that the German automaker had programmed some of its vehicles to cheat emissions tests. Now recovering from the scandal, Volkswagen currently has 20 fully electric vehicles planned through the next eight years and states it has the “goal of becoming the world leader in this area.”

Your (driverless) Lyft is here 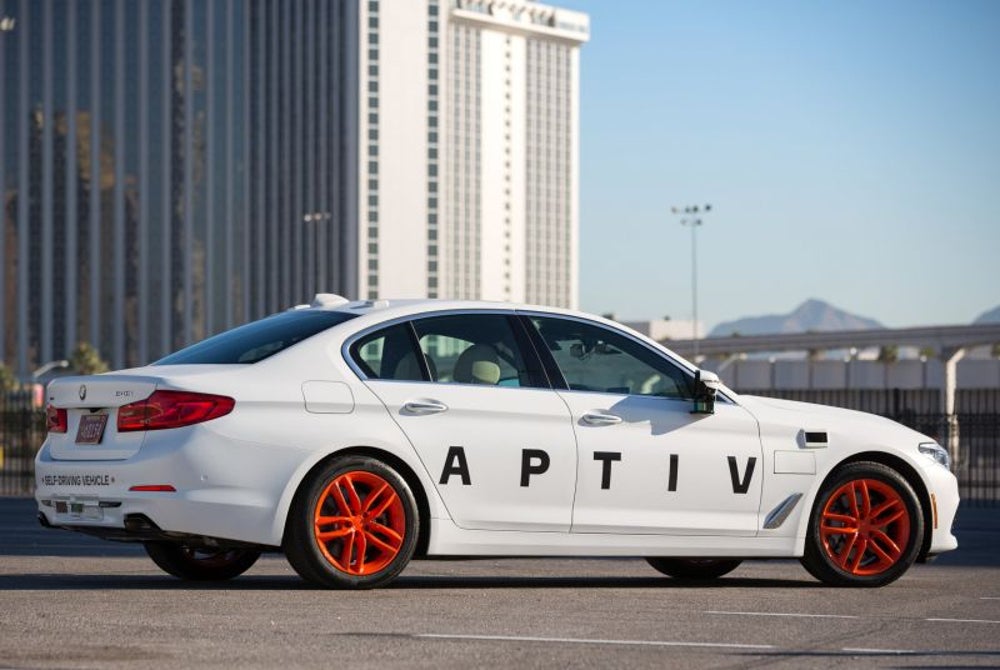 This BMW 5-Series is one of eight in which Aptiv (formerly Delphi) and Lyft have teamed up to provide CES attendees driverless rides. Don’t be fooled, though -- they’re not fully autonomous. During each ride, a back-up driver is in the front seat to take control if necessary, and an in-car host is also present to answer questions.

A tiny car designed for ridesharing. 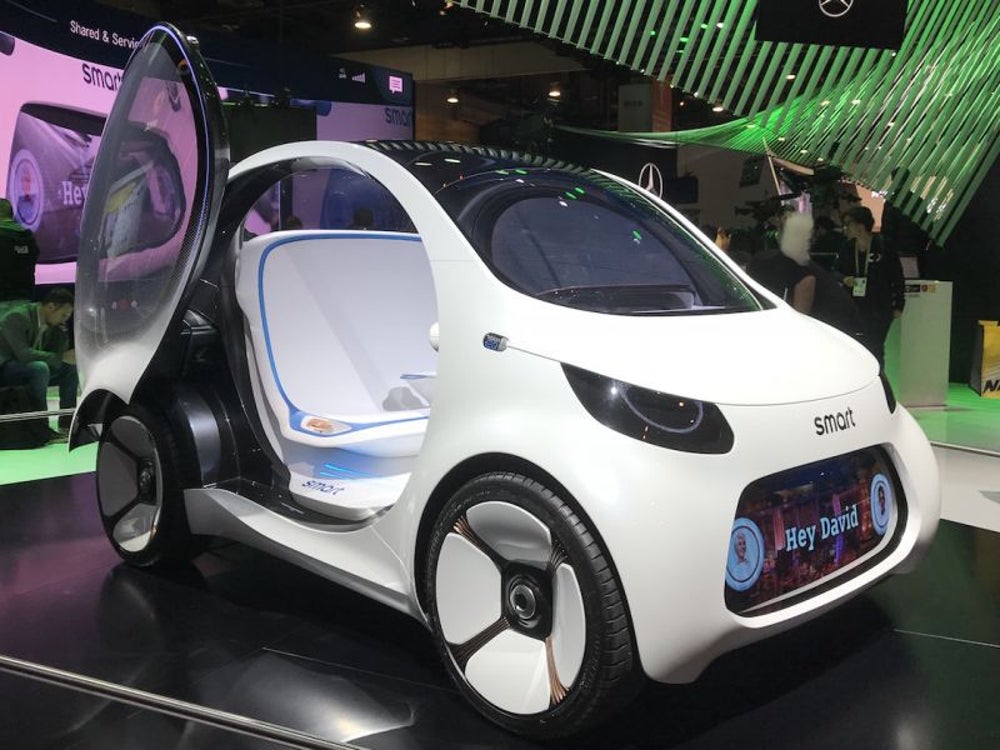 If you’re wondering why this car says “Hey David” on its grill, it’s to help a hypothetical passenger find his corresponding ride-share vehicle. Mercedes-Benz created the electric, autonomous Smart Vision EQ Fortwo concept vehicle with features that allow for individualization, so rideshare participants will feel a sense of belonging with the car, even if they’re only riding in it temporarily.

Because it's designed to be self-driving, Mercedes doesn’t even bother with a steering wheel or pedals. And because it doesn’t have a driver, it would work like current car-share and bike-share services, with the ability to be left in various locations and navigate to its next passenger(s) by itself.

The manner in which the doors open is designed to prevent collisions with pedestrians and cyclists, and the LED displays on the exterior are meant to look like eyes, personifying the car to make it seem even more welcoming. 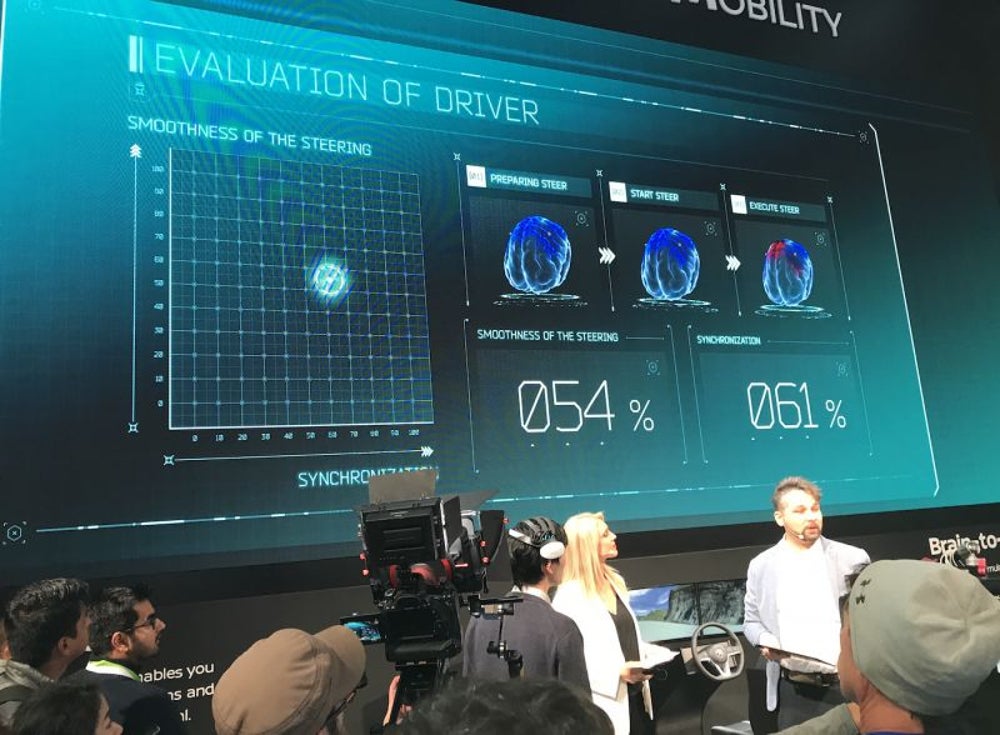 At the Nissan booth, "intelligent mobility" was the refrain the company chose to define its goals and new initiatives. Nissan Senior Innovation Researcher Lucian Gheorghe gave a presentation Tuesday afternoon about the company's Brain-to-Vehicle (B2V) technology, which collects a driver's motor cortex activity, and feeds it to a vehicle in real time. In just a few hundred miliseconds, it synchronizes autonomous driving technology with a driver's actions so that the car can gauge how that specific driver is likely to react in a certain scenario and react accordingly. Nissan can pull specific metrics about the smoothness of a driver's steering and more.

Learn more about Nissan's B2V tech from the video below.

A vehicle that's only emission is water 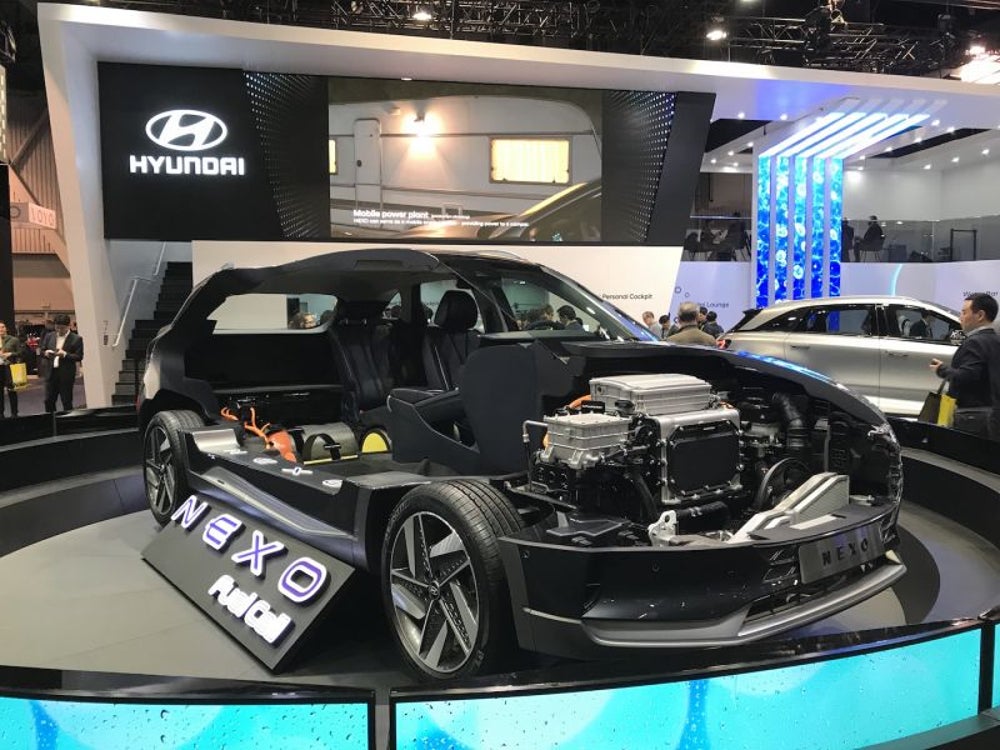 Hyundai claims that the latest version of its hydrogen fuel cell SUV, the Nexo, has a range of  370 miles, with a refilling time of less than five minutes and an estimated rate of 60 miles per gallon. At its CES booth, the company displayed a dissected version of the vehicle to display its 120 kW e-motor. Meanwhile, hydrogen refilling stations are hard to come by.

A self-driving car that doesn't want to look like one 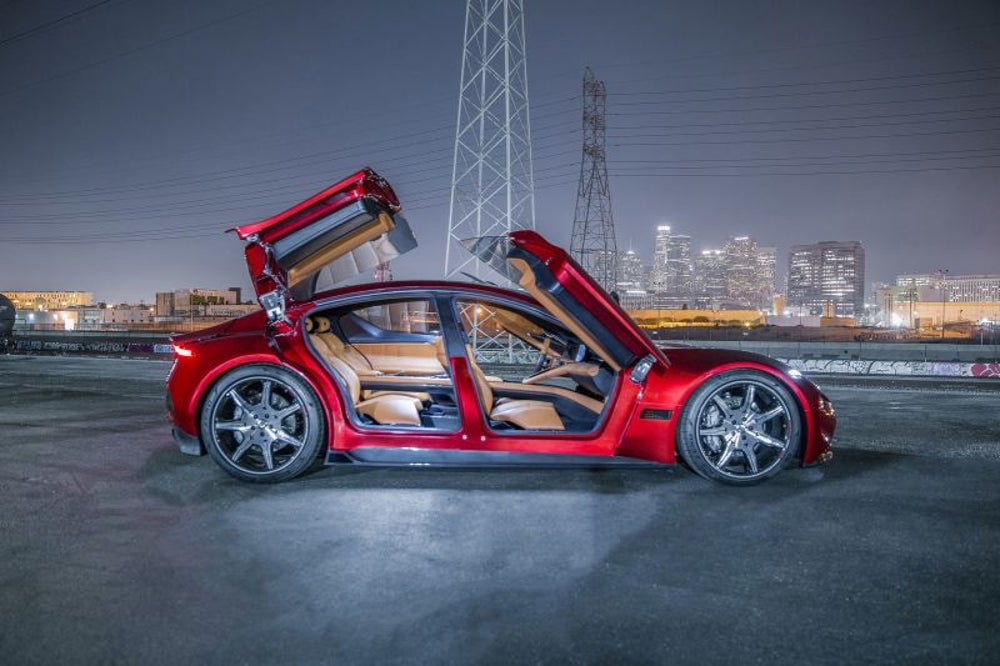 Yet another autonomous, electric vehicle, the Fisker EMotion, debuted at CES this week. Its creators prioritize aesthetics and have the goal of concealing the luxury sedan's self-driving tech, including upgrade-optional lidar sensors by partner Quanergy Systems.

The long-range (400 miles, according to the company) vehicle is slated for production in 2019, and the base price is $129,900. However, The Verge reports that Fisker still has some work to do in getting those vertical doors, which theoretically will open and close via smartphone controls, to work in its production model.

Another 'flying car' a.k.a. big drone 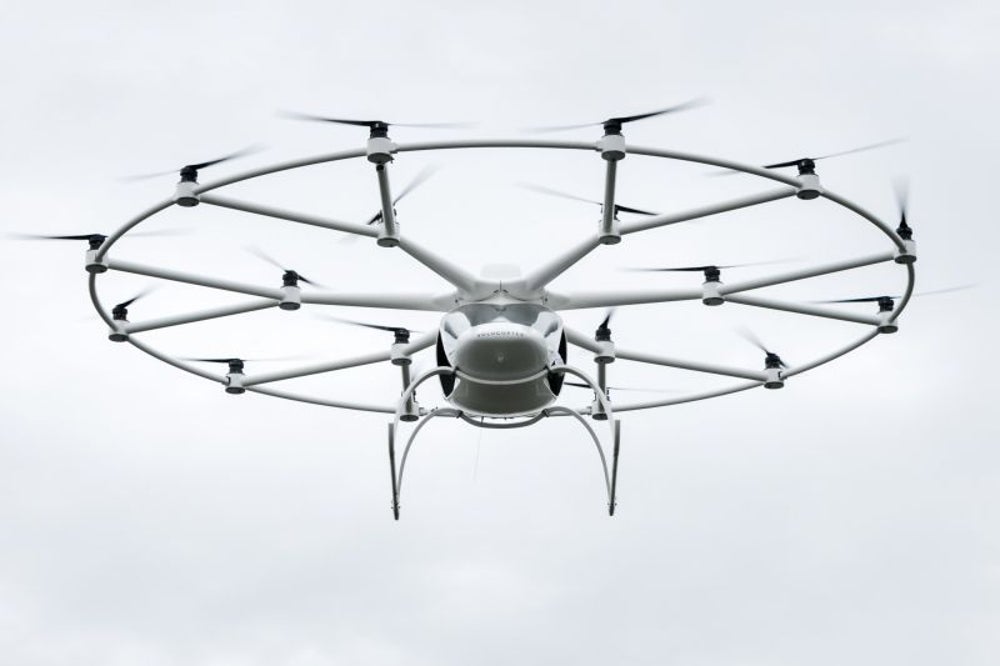 At his CES keyote earlier this week, Intel CEO Brian Krzanich shared the stage with the first North American flight of the Volocopter, the product of a small German startup. He also announced a partnership with the company related to data processing from the vehicle's senors. The autonomous, 18-rotor drone-like electric vehicle is designed to serve as an urban air taxi in the near future -- pending regulatory approval, of course. 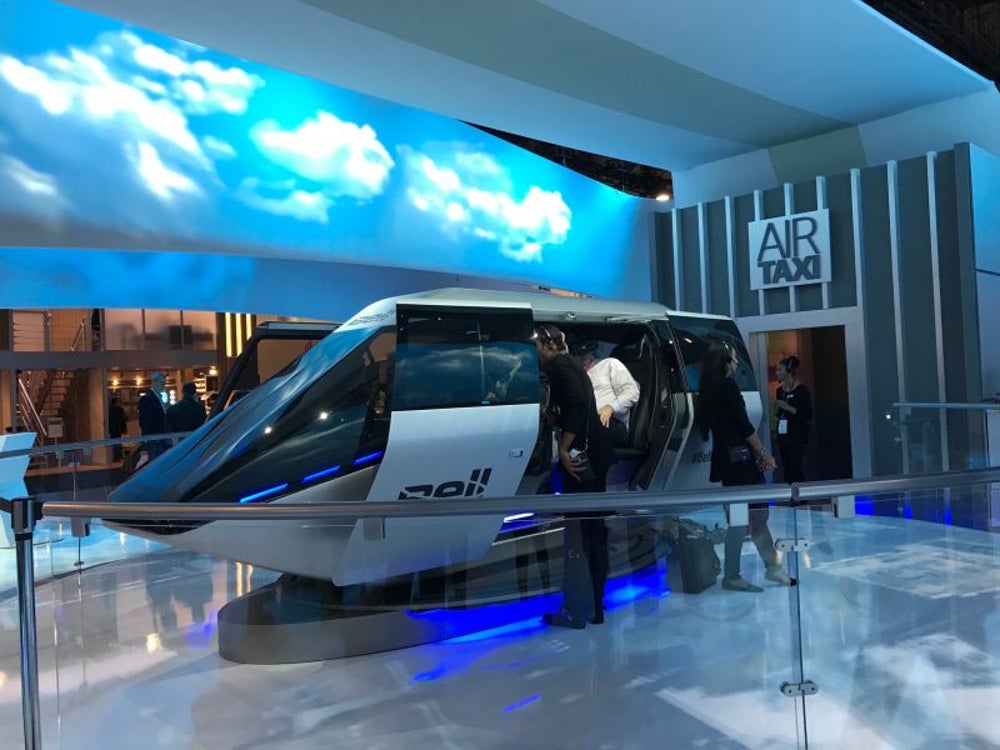 Amid a CES expo hall filled with ground-based transportation tech is the Bell Helicopter, yet another drone-like electric vehicle whose creators are vying for it to be a flying taxi in the future.

Well, it’s only the cabin. The company left the rest of the vehicle’s parts (powertrain and rotors) at home, Bell’s director of innovation, Scott Drennen, told The Verge, “to keep our competition on their on their heels.”

Bell currently makes vertical takeoff aircraft for military and commercial use. Last year, Bell and Uber announced a partnership to create an eventual transportation service using the electric aircraft. The partners are aiming for a version of the electric helicopter to be ready for demonstrations by 2020 and production a few years later, if all goes according to plan.