The Assemblage is designed to bring its community members closer together by reflecting upon the interconnectivity of Earth and the cosmos.
Next Article

Some exclusive communities tend to be closed off, but The Assemblage, a coworking space located in the NoMad district of Manhattan, is all about the pursuit of universal connection.

“When we say, ‘Let’s create a new vision of humanity and reach the next step in our evolution,’” says Assemblage Chief Creative Officer Magdalena Sartori, “we cannot forget that there’s knowledge out there that we don’t have access to.”

Related: How the California Pizza Kitchen Corporate Office Escaped From the '80s and Became a Community

The coworking space, which opened in September 2017, was co-founded by Rodrigo Niño. Seven years ago, Niño was diagnosed with Stage 3 melanoma, and he traveled to Peru and had his first ayahuasca experience with an indigenous tribe. During that hallucinogenic experience, Niño came to some new conclusions about nature, humanity and the interconnectivity of all living things.

These themes inspired the concept for The Assemblage, a “community of individuals who believe the world is at the verge of a collective conscious evolution, transitioning from a society defined by individualism and separation into one of interconnectedness.”

Niño is also the CEO of Prodigy, a platform designed for buying commercial real estate via crowdfunding. The Assemblage’s first location was completely crowdfunded, along with two forthcoming Manhattan locations.

Today, the 12-story flexible workspace is home to freelancers and small teams (the largest being a team of 12). Members can rent their own private partitioned (but modular) office spaces, dedicated desks or spend their days working, socializing or taking wellness classes on one of three communal floors (plus the rooftop and mezzanine).

Click through the slides learn about how The Assemblage encourages community, connection and participation, rather than transactions, hierarchies and rules. 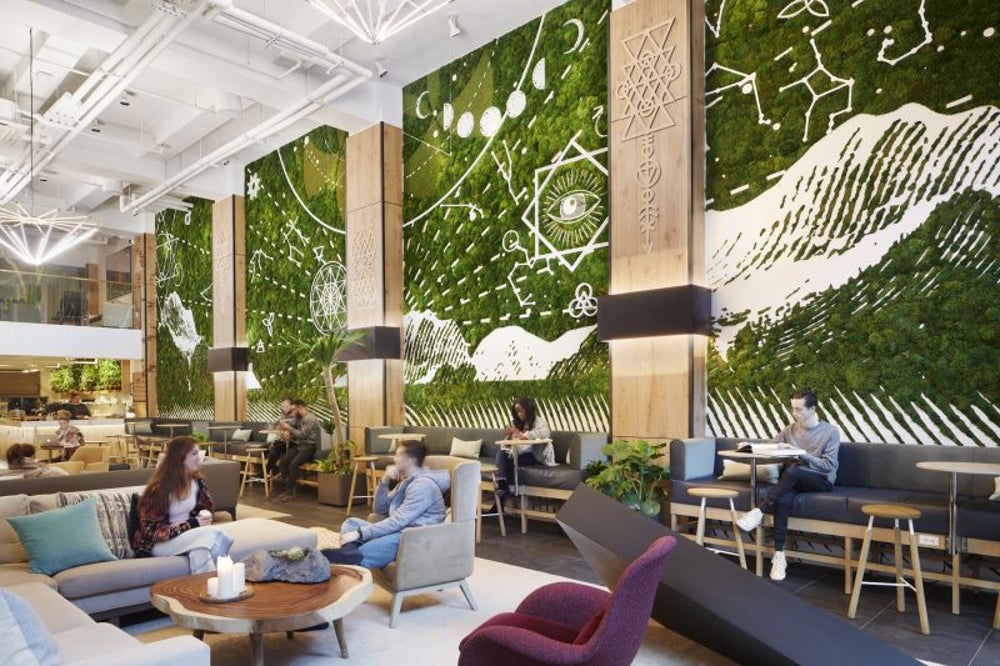 There are about 2,530 plants throughout the entire space, the idea being to make it a “living, breathing” environment. This design is based on the concept of biophilia, coined by Edward O. Wilson, which refers to humans’ affinity for the natural world, or their need to be surrounded by nature.

Sartori worked with landscape design group Plant the Future on the large moss wall installation, titled “Creation.” Within it is a mix of sacred geometry and constellations, which represent connections among all things, including between science and spirituality and between “the macro and the micro,” according to Sartori.

Related: I Didn't Need to Drop Ayahuasca to Learn Something Deep About Community From This Coworking Space

Plants add energy to the space, she explains, but those located away from the windows need light. What looks like a row of track lighting to showcase the vegetation behind the breakfast and lunch counter actually serves to nourish the plants. 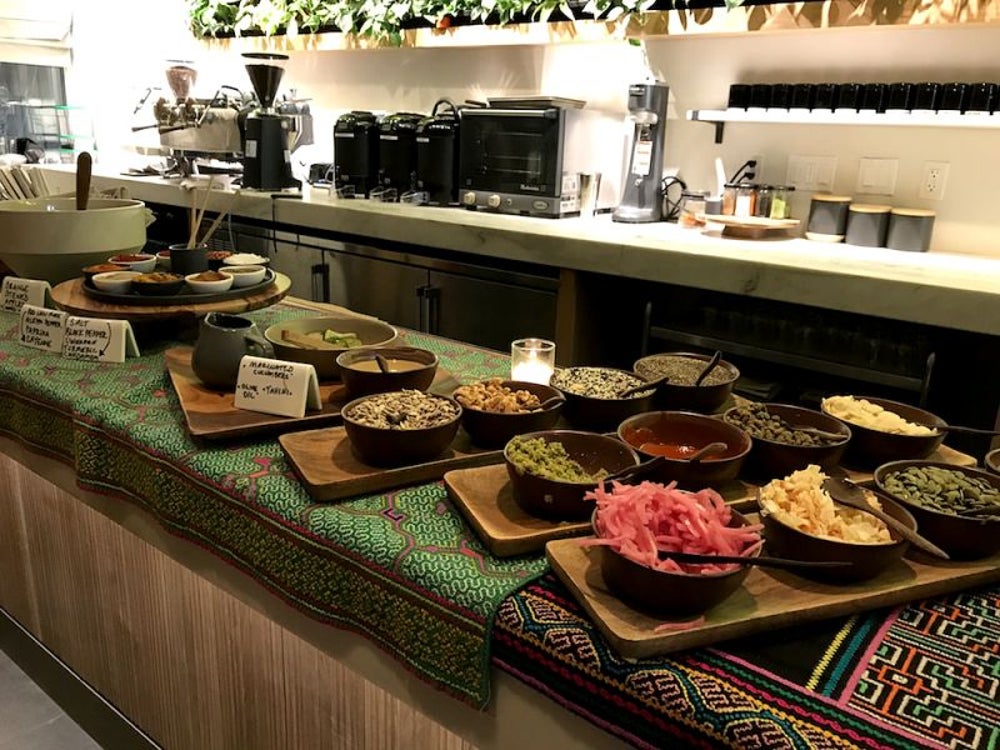 Breakfast and lunch served to members and guests at The Assemblage adheres to the Indian philosophy of Ayurveda (sanskrit for “life” and “knowledge”). All items, sourced within 200 miles, reflect this seasonal dietary practice, and members can build their plates according to their individual specifications.

“It’s very in line with the cosmos and the planet,” Sartori says. “For example, You’re not supposed to eat anything raw in the winter. Your body cannot process it. It’s already processing living in cold weather with not much sunlight, so it cannot process raw food.”

The ayurvedic philosophy involves balancing six tastes -- sweet, sour, salty, pungent, bitter and astringent --  “which have different chemical consequences in the body and the mind,” according to information The Assemblage shared with Entrepreneur. “Though one or more taste may prevail in a dish, all six must be included for the meal itself” to achieve physical, mental and emotional well-being.

While it’s been a challenge for the kitchen to prepare ayurvedic meals, because the diet has so many restrictions, such as foods that cannot be paired together, Sartori says, over time, the community educates itself about the philosophy.

A place of enchantment and refuge 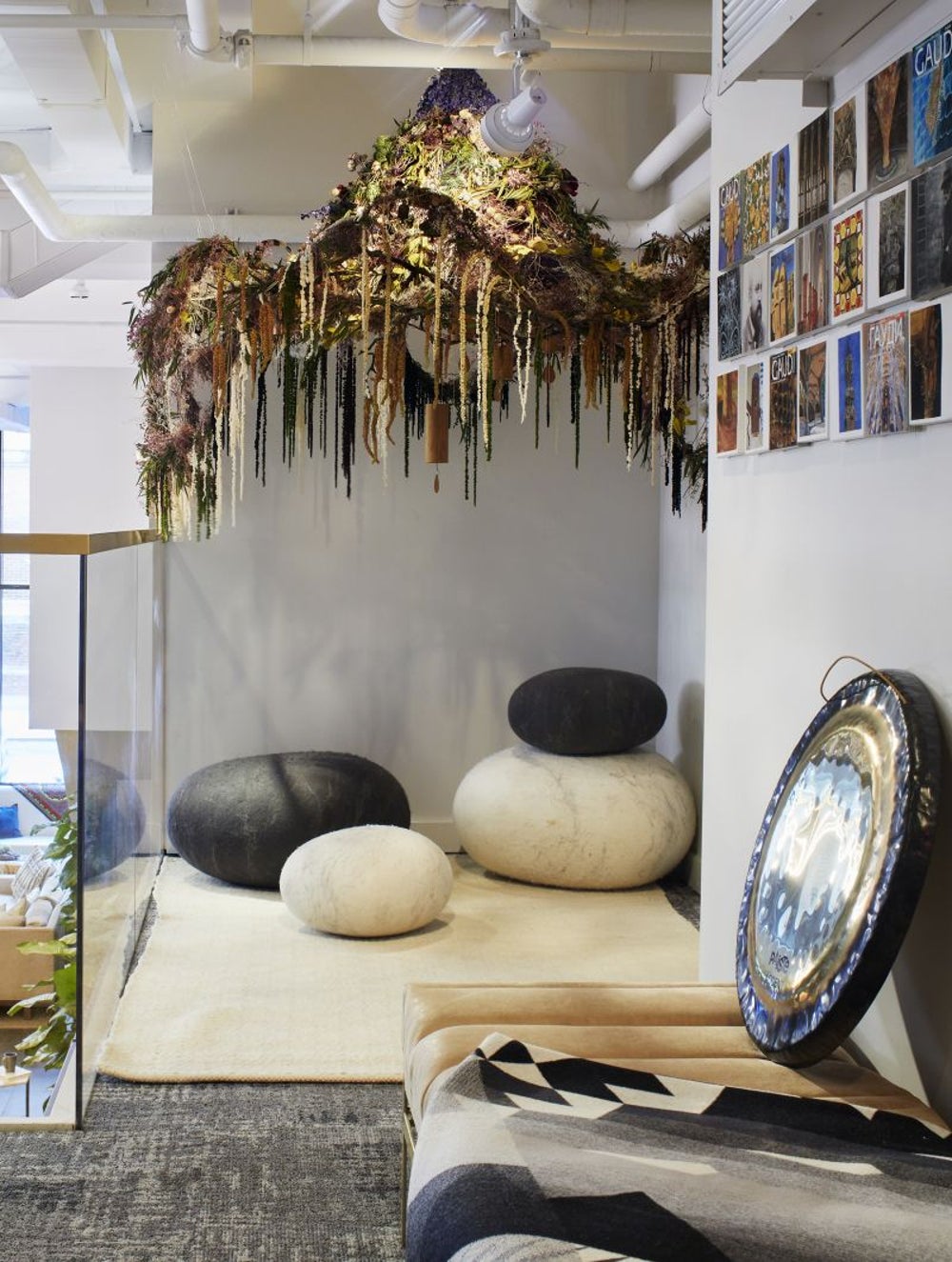 Interior designer Georgia Marcantoni became a consultant and member at The Assemblage simultaneously. A friend introduced her to the team, and she soon began helping to source materials for various aspects of the space.

Marcantoni was inspired by biophilia when creating this “nest” on the mezzanine level. When The Assemblage first opened, there was nothing on that section of the loft. Sometimes, people would gather there, but its purpose was unclear. Because The Assemblage strives to let its members take ownership of the space, Marcantoni contributed the nest canopy.

Preserved flowers (as well as some fake ones), antique bells from India and Turkey and LED lights make up the installation, which Marcantoni says is meant to evoke curiosity. The nook itself is a place of refuge, Marcantoni says, where members can find a bit of enchantment as well as quiet away from the open floorplan areas.

“A big part of what the direction was for me was bringing that sense of home into the space,” Marcantoni says. “I worked with a lot of texture and a lot of beautiful objects that would center you and hold the energy of the intention a little bit better.”

The Assemblage has published a blog post about Marcantoni’s work.

Tapestries made in Peru 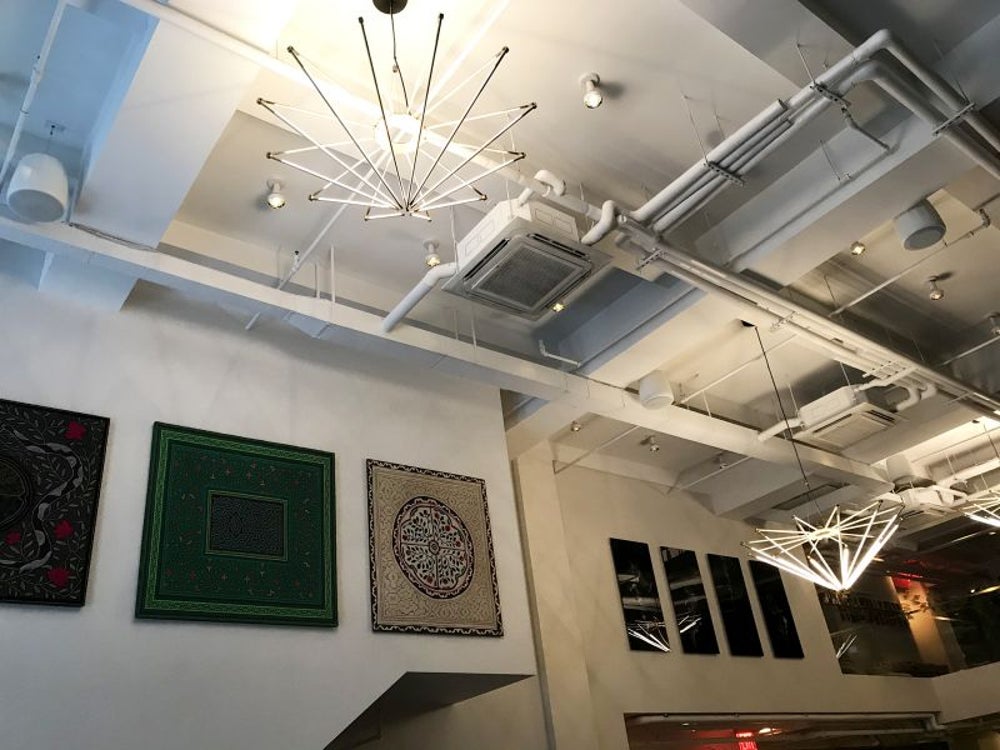 Indigenous women in Peru made this artwork based on visions that they had during ayahuasca experiences. As Sartori remarks, this works represent the knowledge that we don’t have access to without actively pursuing it. Two representatives from The Assemblage went to Peru to source works, negotiating carefully with the women of various tribes.

Members take care of themselves 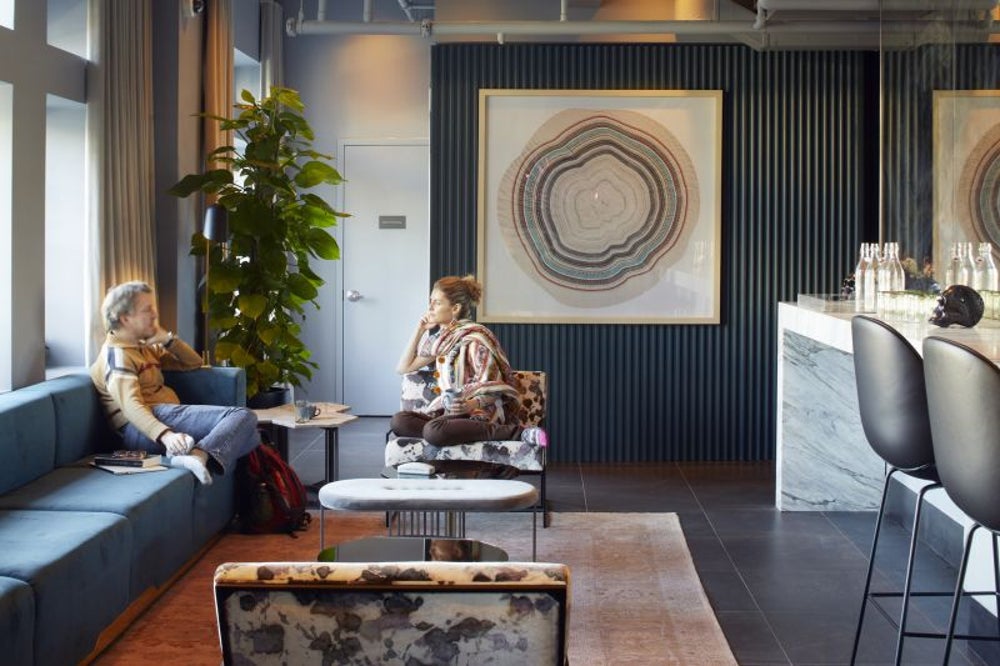 When The Assemblage first hired employees to help with food and beverage service, the co-founders emphasized to them that they would be the first members of the space. There’s no separation between staff and members, and members are required to “own their own actions” and clean up after themselves, Sartori explains.

To foster a community feel, when members head to the counter for breakfast or lunch, it’s not a transactional relationship. They grab a plate, then often sit down and converse with their neighbors, who have descended from all 12 floors for the meal. 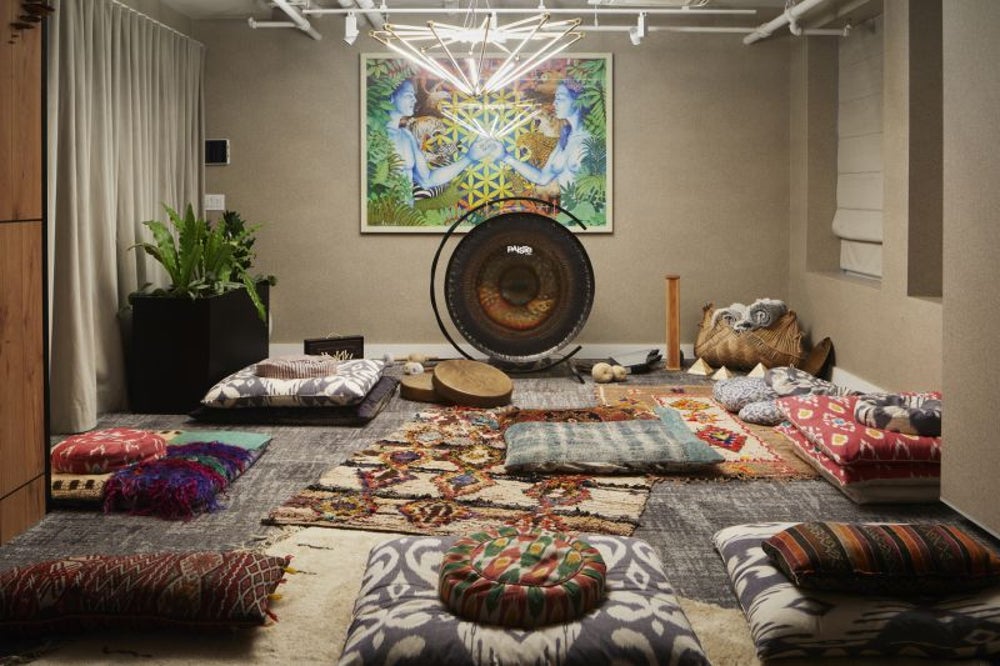 “This is my favorite room,” Sartori says of this cozy space located on the mezzanine level.

Members use this room for group breathwork and meditation classes. It contains a Gamelatron, designed by Brooklyn artist Aaron Taylor Kuffner. Kuffner studied in Indonesia and now creates these programmable gong-like instruments. Today, there are about 45 in existence, and Kuffner has started a foundation that donates one Gamelatron a year to a community where it can provide a therapeutic element.

Members can feel free to use the room, when classes aren’t in session, to take a brief break for solitary meditation. They can even use an iPod to play a song on the Gamelatron.

During group sessions, members often lay on the floor, on pillows and rugs designed by Marcantoni. All class instructors are Assemblage members. 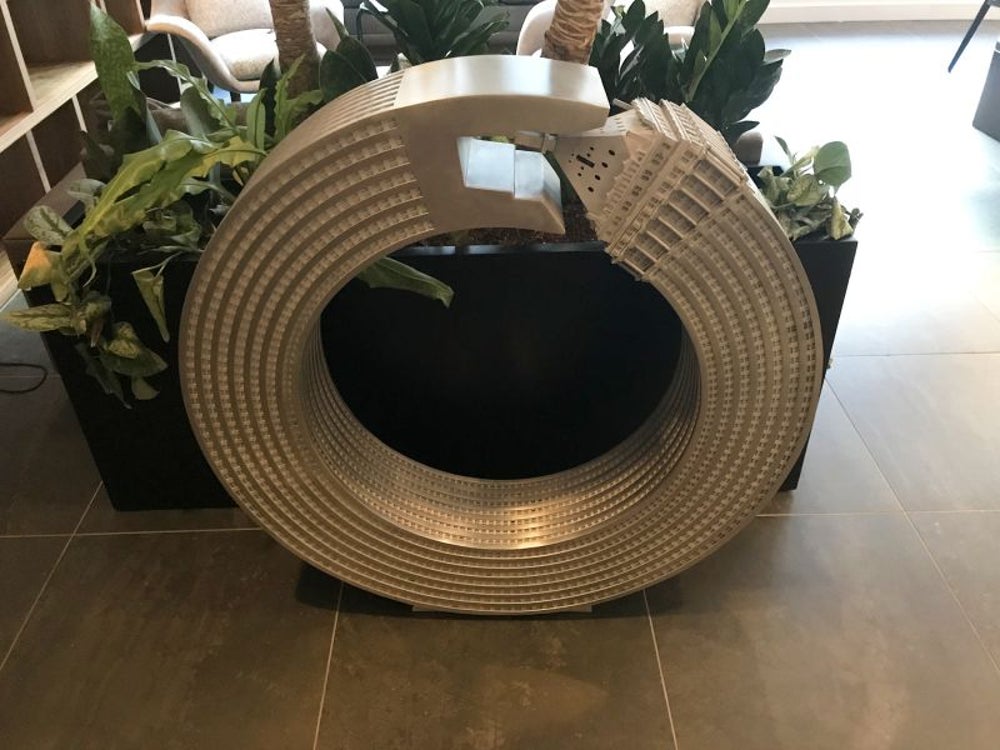 “Rodrigo and I are both art lovers, and we spent the last five years sourcing different artists,” Sartori says. “Buying from living artists is super important to us, because the idea that someone can actually live from producing art in the planet is so important.”

Most of the artwork throughout the space is sourced from young Colombian artists, she says. 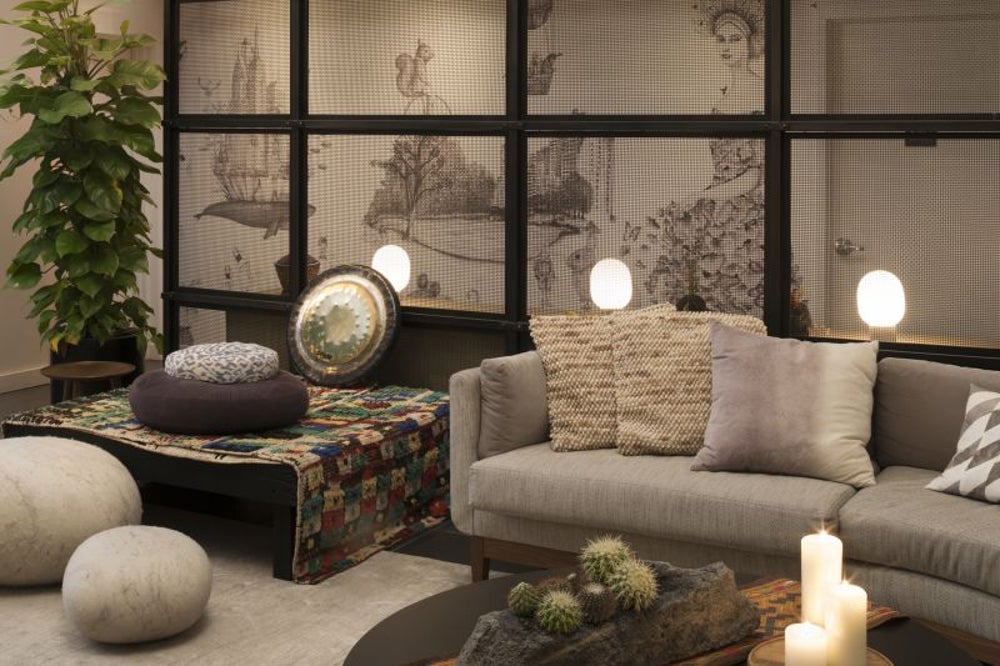 This wallpaper installation represents the concept of biophilia, and a designer who is the wife of one of The Assemblage’s brokers helped create it.

Staircases where members can express themselves 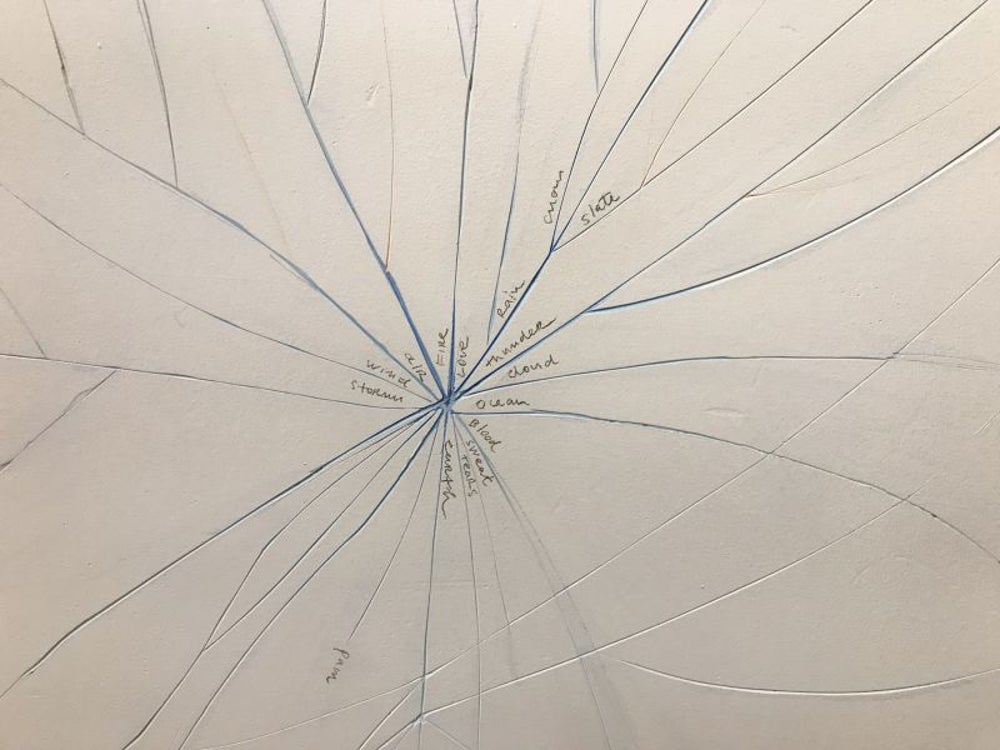 The staircases are a whole art project in and of itself, and spaces between certain floors have been overtaken by members who have begun to create murals on the walls of the stairwell.

“Give them space to let their creativity out,” Sartori says, “and we want to encourage everyone to use the stairs.”

Some artists even write on the walls, giving members who traverse the stairways interesting tidbits to discover. 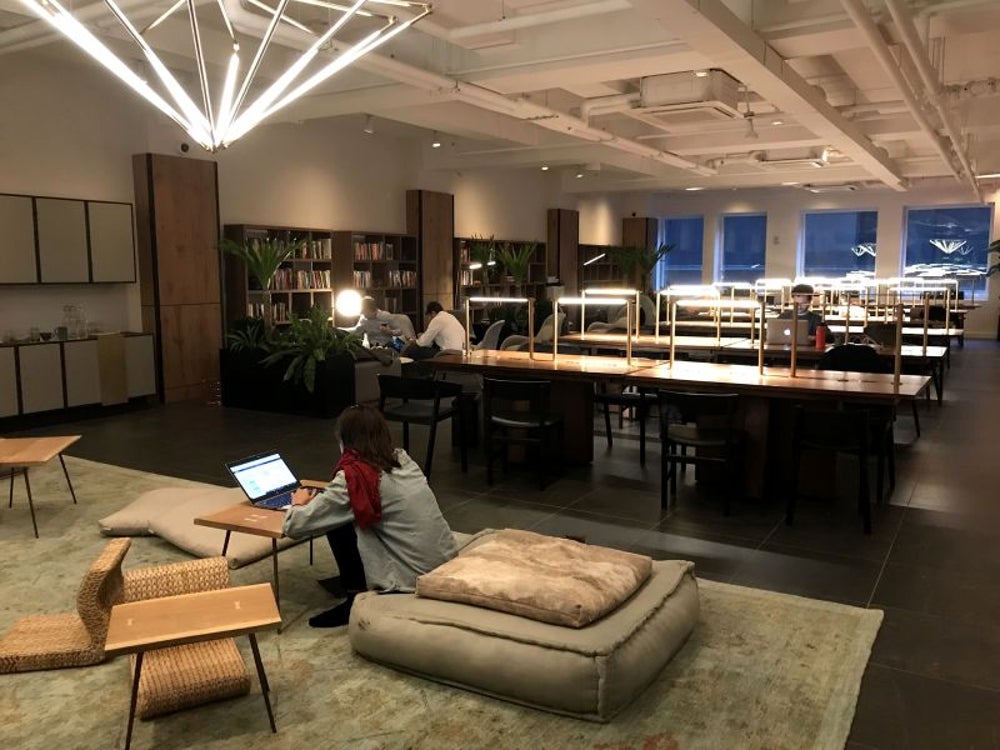 In addition to being the home of 9 a.m. yoga, the second floor serves as a library. New York City shaman Itzhak Beery donated a collection of his own books to the space, and members contribute works on spirituality and wellness as well.

Members also gather in this area to share knowledge. For example, one person might teach Spanish, and maybe, in exchange, somebody else would do a writing workshop.

The rows of tables on this floor are often used for quiet work, but The Assemblage never imposed a rule of silence in this area. The members have carved out this floor for that purpose, while the ground floor and the 12th floor are more social communal areas. 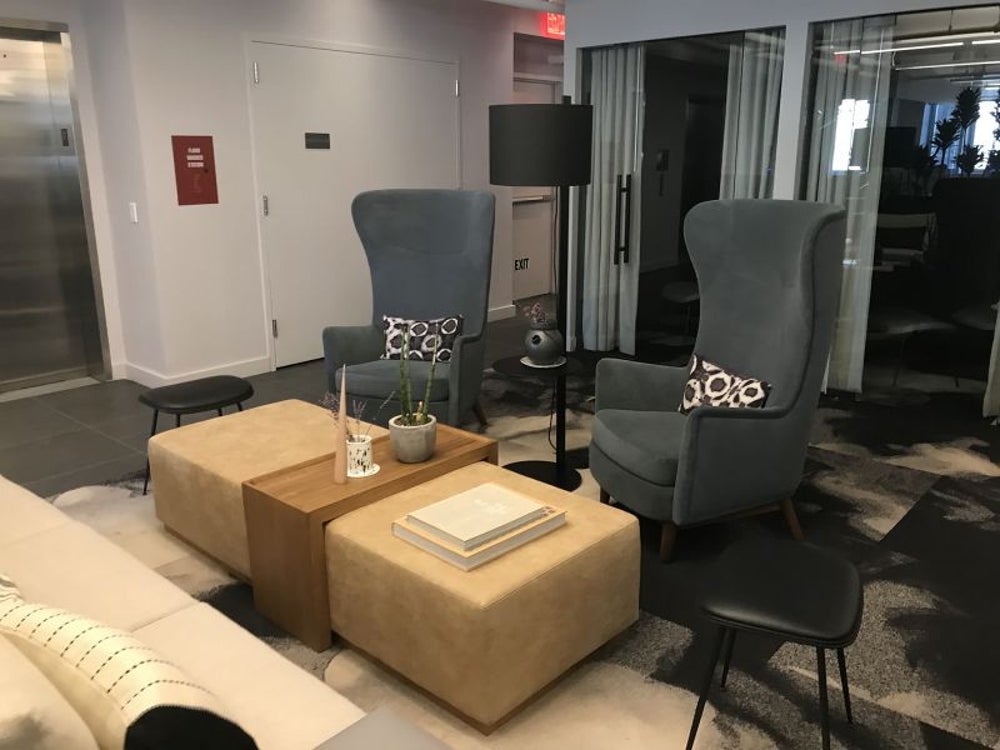 Members can reserve office space on floors 3 through 11, and it’s modular, meaning that small companies can have their own lounges, or just office space, depending on their subscription. Dedicated desks for individuals are also available.

Every floor has its own meeting room members can rent out, and on some coworking floors, the large room serves as a meditation room instead. There are also phone booths where members can conduct private conversations on shared floors.

The boardroom and the ‘Alchemy Bar’ 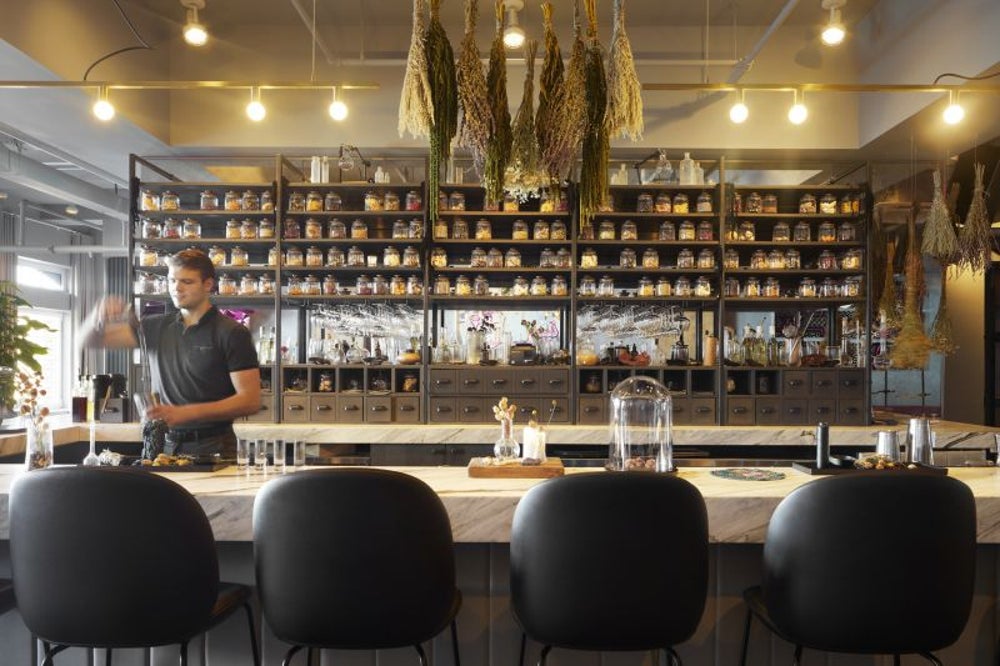 Members can reserve the boardroom at the back of the 12th floor for dinners and other private events. It sits behind an open floor space with cushions and small candlelit tables -- a casual and cozy place for members to talk amongst themselves, hold informal meetings or do solitary work.

Next to this area is The Assemblage’s “alchemy bar.” There is no alcohol served in the space; instead, alchemists serve elixirs to guests which contain a variety of nutrients, from ginger to gingko. They’re an alternative to cocktails, as well as sugary juices.

The name of each elixir corresponds with an intention, so when someone orders the “Energy” or the “Immunity” or the “Joy,” they are setting an intention in that moment.

Two of the bartenders used to work at The Alchemist’s Kitchen in Manhattan before joining The Assemblage.