Forget buying CDs or even downloading MP3s. With Rdio's streaming service, music moves from a purchase decision to a social experience.
Next Article

If the founders of online jukebox service Rdio (pronounced ar-dee-oh) are right, the concept of an individual music collection is a thing of the past. "Look at what's happened with Netflix," says Rdio CEO Drew Larner. "The same shift is going to happen in music--and faster." The future of music is streaming, Larner says, thanks to faster broadband access, the proliferation of smartphones and consumer acceptance of on-demand content.

Founded in 2010, Rdio joins other music streaming services (Rhapsody, MOG, Apple and Pandora, to name a few), but adds a twist: The service is built around a social experience that helps consumers discover music organically. They "follow" friends and influencers and get a live network activity feed, and they share playlists on Facebook and Twitter--which features an embedded Rdio player in its user interface when you click on an @Rdio link. (There's an API for developers.)

Rdio founders Niklas Zennström and Janus Friis certainly are no strangers to the game-changing nature of the internet. They previously founded the phone-busting service Skype, the online video service Joost and--how's this for irony?--the Napster-like music-sharing service Kazaa.

A subscription ($4.99 a month for web only; $9.99 a month for mobile and web) gets you unlimited access to a constantly expanding catalog--currently around 10 million songs--that includes everything from the latest Lady Gaga release to the Flaming Lips' live radio session of "Yoshimi Battles the Pink Robots Part 1." Users can play whole albums and artist-related radio stations, create set playlists and add songs to a virtual music "collection," queue songs for offline playback and, best of all, see what everyone else is listening to.

In February, Rdio closed on a $17.5 million investment round, prompting Larner to move from L.A. to headquarters in San Francisco (and throw out about 500 old albums in the process) to head up the next stage of expansion: refining the service, launching in more countries, building up partnerships and hiring up to 15 new employees by the end of the second quarter (there are 35 now, plus a Boston terrier named Duke). 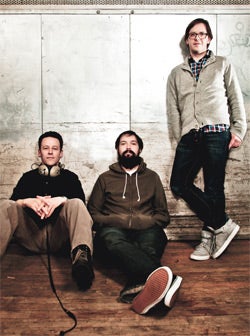 "We're in discussions with everyone--labels, internet service providers, handheld manufacturers, celebrities--you name it," he says. "The music industry needs a low-cost streaming service as a discovery mechanism that leads to album and ticket sales, and Rdio is a good first step in that direction."

Of course, the main hurdle is getting people to change their consumption patterns from ownership to a pay-for-access model. Based on the subscription numbers since its launch last August, though, Larner thinks Rdio can break more than 1 million subscribers within the next five years, becoming a serious industry player.

But first, he has to move again. Rdio is going to need a much bigger office.