The JOBS Act: What You Need To Know 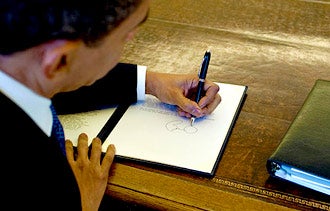 The ink is still drying on a piece of legislation that President Obama signed today, and the new law is good news for entrepreneurs seeking capital. Here's a rundown of what is in the law and why it matters to you and your business.

The JOBS (an acronym for Jumpstart Our Business Startups) Act is a compendium of six pieces of legislation that are all aimed at increasing the ability of small businesses to access capital and generate jobs. The following breakdown of the provisions is according to information provided by the White House and an analysis of the JOBS Act written by two corporate and capital markets attorneys, David M. Lynn and Anna T. Pinedo of Morrison & Foerster, a global law firm headquartered in San Francisco, Calif.

1. It’s now easier for you to take your company public. The Reopening American Capital Markets to Emerging Growth Companies Act provision adds a new category of stock issuer to the Securities and Exchange Commission laws. The category, among other qualifications, defines an “emerging growth company” as a business with total gross revenues of less than $1 billion in its most recent fiscal year. The law provides such businesses temporary relief from certain SEC regulations, making it easier and more feasible to go public.

When does this go into effect? This provision is effective immediately and, in fact, if you have filed for IPO since December 8, 2011, you are able to apply retroactively for status as an “emerging growth company.”

2. It will be easier for you to sell your stock to private investors. The Access to Capital for Job Creators Act removes a SEC regulatory ban that says businesses cannot use advertisements to attract investors to a non-public offering. It has been very burdensome from a practical standpoint for companies of all sizes to keep their communications about a private stock sale under wraps.

When does this go into effect? The SEC has 90 days from today to amend its rules that prohibit solicitation.

3. You will have a new way of raising money by selling a piece of your company to the “crowd.” The Entrepreneur Access to Credit Act allows business owners to sell equity in their company to anyone with the cash and the interest through crowdfunding. Previously, crowdfunding was predominantly restricted to artists and business owners accepting small donations in exchange for things like tote bags and CDs. Also, the provision says that you don’t have to be an accredited investor (i.e., a really rich person) to invest in a company.

When does this go into effect? The SEC has 270 days from today to come up with a new regulatory framework allowing businesses to sell company equity on crowdfunding platforms. If you are hoping to sell pieces of your company to investors, you will have to wait until after Thanksgiving.

4. You can raise a lot more money before having to deal with the SEC. The Small Company Capital Formation Act elevates the threshold of capital that companies can raise from the public to $50 million from $5 million in a twelve month period before they have to register with the SEC.

When does this go into effect? The SEC has to rewrite its rules. Unlike other provisions, there is not a specific deadline for the SEC to do this, according to Pinedo of Morrison Foerster.

5. You can grow twice as large as before without registering with the SEC. The Private Company Flexibility and Growth Act is expected to give small companies more time to grow by expanding the shareholder limit for registration with the SEC. As the law currently stands, companies that have 500 or more investors and total assets of more than $10 million are required to register with the SEC. Under the new law, companies have to register only when they have $10 million in total assets and either 2,000 investors or 500 non-accredited investors. (If you have investors that bought pieces of your company under the new crowdfunding law, they would be excluded from this investor count.) The company will have to register within 120 days of a company’s first fiscal year meeting the caps.

When does this go into effect? The SEC has to rewrite its rules. And like the previous provision, there is no specific deadline for the SEC to do this.

6. Your community bank will be able to grow larger. The Capital Expansion Act says that a bank or bank holding company will not have to register with the SEC until it has total assets of at least $10 billion and at least 2,000 investors, a marked increase from the previous requirement of 500 allowable shareholders. Banks will have120 days after the first fiscal year of meeting these requirements to register with the SEC. Decreasing the regulatory burden is good for small businesses, as community banks play a critical role in lending to them.

When does this go into effect? The SEC has one year from today to issue a rule to make this change.