Move aside, nerds: Comics are for everyone now--and they're moving out of your parents' basement and into the boardroom. Leading the shift is Franco Arda, founder and CEO of SmarterComics, a publisher of business books that have been reimagined as illustrated texts.

In 2008, Arda, who worked in derivative sales for Deutsche Bank, was approaching 40 and needed a change. So he left investment banking to write Fortune Favors the Bold, a book about achieving goals. But when he completed the project, Arda says, he "thought it sounded boring." 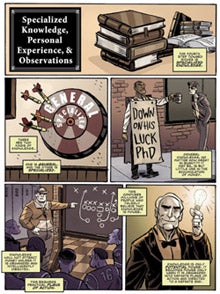 He met comic artist Anjin Anhut, who suggested he illustrate the book. Arda enjoyed nonfiction but didn't know anything about comics; the idea of combining the two intrigued him. "I thought it was a new medium for making people smarter," he says. In 2010, SmarterComics was born.

The Palo Alto, Calif.-based company has graphically translated Chris Anderson's The Long Tail, Sun Tzu's The Art of War and Machiavelli's The Prince, and is working with rapper 50 Cent to put out a comic version of The 50th Law, his book on strategy and success, this fall. SmarterComics' offerings aren't word-for-word interpretations; a comic-book scriptwriter creates a storyboard of the main points, then collaborates with the illustrator, who is chosen based on his or her style and its suitability to the topic at hand.

"Today we read differently than, say, 20 years ago," Arda says. "It's not only that we are moving to digital, but we prefer information in bit sizes or Twitter style--short and to the point."

And no one drives this bit- and byte-size movement more than Millennials--the nearly 46 million twentysomethings known for being progressive, open to change and driven by technology (though with an appreciation for all things retro). SmarterComics is just right for that youthful audience--more than half of whom say they want to start their own business someday, according to a late-2011 survey by youth advocacy organization Young Invincibles, funded in part by the Kauffman Foundation.

SmarterComics publications are distributed mainly through online retailers like Amazon and Barnes & Noble, but are also available in select bookstores in the U.S. and Canada. The company has foreign licenses in Turkey, South Korea, China, Thailand and other countries.

This year, SmarterComics (which declined to disclose exact sales figures) aims to sell 300,000 to 400,000 books and is moving heavily into digital. "Comics in particular are very suited for smartphones, because there's little text and the illustrations make it fun to read," Arda says. It's an apt direction for a company that bills itself as "the perfect solution for people on the go who want to get smarter and have fun in the process."

Sock It To Me: G4 socks. Think anthropomorphic toast, baby dinosaurs and the solar system--and crowdsourced designs, too.

Retrode: This USB adapter for vintage video games revives the good ol' 16-bit days on your computer, smartphone or tablet, using the original cartridges and controllers.

Quarterly: Every three months for $25, users get a gift created exclusively for Quarterly by influencers such as reddit co-founder Alexis Ohanian, Swiss designer Tina Roth Eisenberg and writer Joshua Foer.

Geek Chic: The company name says it all: custom-designed wood furniture for video and tabletop gaming, plus curiosities such as mustache monocles.

Looptworks: An online retailer in the upcycling space that transforms scrap materials into limited-edition, one-of-a-kind clothing and accessories.