Here's a reality check: Nearly half the clicks on ads in mobile apps or games are made by mistake, according to a survey by Harris Interactive. Merely an inconvenience for consumers, wayward clicks present a costly problem for marketers who are billed for every tap.

"All the existing mobile ad models were designed for enterprise companies that can absorb the cost of accidental clicks," says Zephrin Lasker, co-founder and CEO of Brooklyn, N.Y.-based startup Pontiflex. "There's never been an easy way for small businesses to get into mobile advertising without throwing money away." 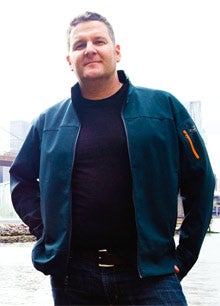 "You don't want to irritate the consumer, you just want to get in front of them."
--Zephrin Lasker, Pontiflex

To address the problem, Lasker and his team developed AdLeads, a self-service mobile ad platform that enables companies to launch geo-targeted campaigns that sidestep the cost-per-click model in favor of a sign-up-based approach. With sign-ups, the advertiser pays only when a consumer shares information such as name, e-mail address or phone number.

Instead of conventional banner ads that, when tapped, transport users to a new mobile landing page, Lasker's sign-up ads automatically generate a welcome e-mail. This keeps customers inside the app. "You don't want to irritate the consumer, you just want to get in front of them," he says. "Signups make it easy for someone to say, ‘Hey, I'm interested, but I'll get back to you later.'"

That kind of quality lead is a game-changer, according to Adil Qayyum, CEO of BrownHub, a Chicago-based daily-deals service. BrownHub rolled out its first AdLeads campaign this spring and secured more than 100 customer e-mail addresses within the first week, far exceeding Qayyum's expectations.

More than 1,000 companies in 17 international markets have launched AdLeads campaigns by creating their own ads--usually in less than half an hour--that have global reach or are targeted to particular cities. Pontiflex, which requires a minimum spend of $100 to roll out a campaign, bills clients between 50 cents and $15 per sign-up, depending on the geographic range and the number of input fields selected.

To place those ads across more than 100,000 apps in the iOS and Android universe, Pontiflex offers app developers a revenue share. Lasker wouldn't give specifics but says the deals are often above market value.

"We want to use technology to help small businesses get ahead," he adds. "Clicks just disappear, but we're delivering a permanent data asset and giving these companies real bang for their buck."