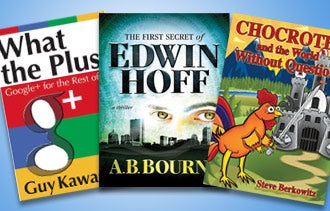 "It's terrible. The average number of copies sold of any self-published book is less than 50," Chris Howard says. He has been working to change that since 2009, when he conceived Cambridge, Mass.-based website Libboo.com to improve the quality of self-published books and to create a community of readers that could help cultivate a list of digital bestsellers. But when Libboo launched in 2011, it bombed, averaging a measly five new community members and 40 unique check-ins per week. Clearly, Howard needed a better hook.

The Fix
Howard informally quizzed acquaintances and the Libboo community about what drives them to buy books. He found that the vast majority buys titles based on recommendations from either friends or, more important, respected authors. That struck a chord. "We learned that mobilizing authors was the most efficient way to get the word out about our books," he says.

Libboo promptly switched its model from pure content distribution to a content-discovery experience. Authors are invited to publish digital storefronts and have influencers (bloggers, critics, fellow authors) review and promote the digital titles catalogued on the site that best match their sphere of influence, such as adult fiction, thrillers, romance, business or self-improvement. A patent-pending algorithm tracks these influencers' reach within Libboo, as well as on Facebook and Twitter.

Authors who publish books through Libboo can enjoy royalties that exceed 50 percent of the title's retail price--much like Amazon--but with the benefit of Libboo's commitment to more effective social media marketing. Authors can choose to allocate shares of royalties or other rewards to the most effective influencers within their networks.

The Results
Two weeks after changing Libboo's model in April, weekly unique registrations jumped to 450, and the community grew to 1,500 members. At press time, Howard had deals with five literary agencies to promote unsigned authors (with dozens more in the pipeline); plans to launch a pilot program with Houghton Mifflin (big houses also struggle to market nonblockbusters); and had convinced bestselling business author Guy Kawasaki to upload his latest book. Additionally, the site has notched its first breakout success: Steve Berkowitz's Chocrotes and the World Without Question, which was a No. 1 children's book on Amazon after the author began promoting it via Libboo.

A Second Opinion
Mark Schaefer, author of Return on Influence: The Rise of the Citizen Influencer, confirms that Libboo effectively leverages a new marketing channel: authors. His publisher used more general "influencer" sites like Klout and PeerIndex to try to get the right people to talk about his title, but Schaefer thinks Libboo, with its singular focus on books, could eventually do the heavy lifting for him.

"Libboo doesn't have the critical mass I want at this point," he says, "but I'll check back in three months."