The move looks like a challenge to Facebook's mobile app install ads, which have been gaining favor with game, app and e-commerce companies because they allow users to buy stuff directly from Facebook via the ad (and the app they download).

Obviously, several of those companies are large e-commerce concerns.

Here's what Cards will look like in users' Twitter feeds. They come in three different types, for apps, products and photos. 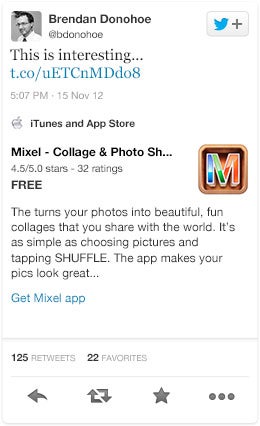 Image credit: Twitter
Anyone who clicks on the blue link can download the app being tweeted about. App developers and online game makers, love these things for obvious reasons. But e-commerce companies who have mobile shopping apps are waking up to them, too. Fab.com has a huge mobile app shopping business from Facebook, for instance. 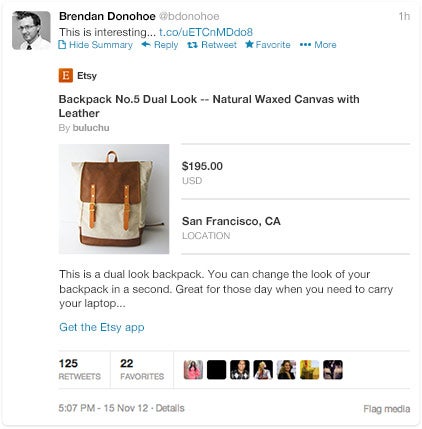 Image credit: Twitter
This Card is an obvious e-commerce play: It's specifically for advertisers who want to display new products for sale. Notably, Facebook does not have a specific "products" display (although advertisers can display new merch any way they want in ads, posts and updates, of course). 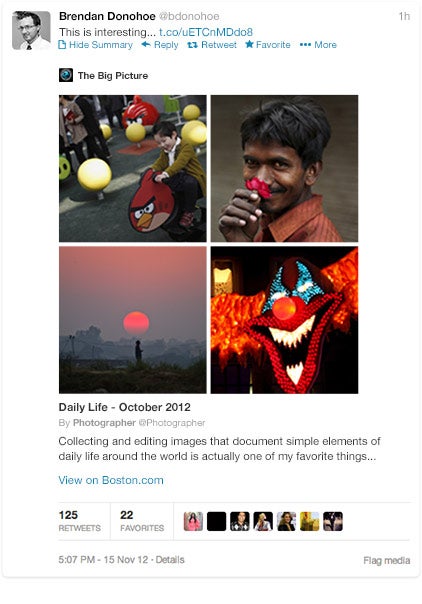 Image credit: Twitter
This app looks like most fun for users rather than advertisers — unless those advertisers regard themselves as publishers and have a lot of imagery to promote. Expect companies who are already active and popular on Instagram, such as Burberry to use this function.

Simon Mansell, CEO of TBG Digital (one of Twitter's ad buying partners), tells us he's excited about the new formats. Cards "make it more effective to use Twitter to drive re-engagement to apps you have installed on your phone but not used for a while," he says. The gallery function indicates that users who want to click through will see a bunch of photos, not just one. The whole thing helps advertisers to "use tweets to drive people to purchase stuff."