The Travel Entrepreneur of the Year

Robert Deluce's vision of what air travel should be today looks a lot like 1990. Everybody gets to check a bag free of charge. Coffee, tea and cookies are served in an open-to-all departure lounge, and beer, wine and snacks are complimentary on the plane. There's plenty of legroom--all the way to the back row--and an in-flight magazine so interesting you'd buy it off the newsstand. And when you land, you're hustled off to the heart of downtown by a free shuttle.

With the addition of modern innovations such as free Wi-Fi in the lounge and a high-end travel boutique selling $31 Australian hand balm and $800 Leica cameras, that's what Deluce has put into place as president and CEO of Porter Airlines, which he co-founded in 2006. "We're a customer-service organization," Deluce says, "that happens to operate aircraft."

The Toronto-based airline, ranked last year by Condé Nast Traveler as the second-best small airline worldwide (after OpenSkies), is by far the most enjoyable to fly in North America. It's also a growing business. From two planes in 2006, it now has 26 Bombardier Q400 turboprops, along with 1,400 employees serving 19 cities and transporting 2.5 million passengers annually. "Since we've moved into many of our markets, air traffic has grown exponentially," Deluce says. "We stimulated it the way Southwest can do, but this isn't about pricing. It's about a travel experience and a value proposition that's fair."

We're a customer-service organization that happens to operate aircraft.--Robert Deluce

Porter was profitable in 2011, even paying out to eligible employees. It makes you wonder what every other airline CEO is thinking. "Different things satisfy different customers, but the cost of much of what we do is really small in the scheme of things," Deluce says. "If you don't have enough built in to your fares to provide passengers with some of these significant but financially inconsequential amenities, something's wrong."

To be fair, Porter did start with significant advantages. Foremost was more than $125 million of startup capital, the second-highest total in the history of the industry, behind JetBlue. Deluce sank $55 million of that into a flagship terminal at Toronto's Billy Bishop City Airport, which was an underutilized anachronism. A mere 90-second ferry ride from the mainland and, from there, about 15 minutes by shuttle to downtown, it's perhaps the best-positioned of the second-tier urban airports in North America. From the start, the airport's manageable size, convenient location and hipster-meets-businessman attitude has been a major part of Porter's marketing campaign.

Porter also seems to have chosen the right aircraft. Whereas most legacy carriers--United, American, Delta, the European flagships--need to sell more than 80 percent of seats to break even on a typical flight, and so-called low-fare carriers like Southwest and Spirit hover in the 70s, according to Deluce, the percentage for the Q400--the only plane Porter flies--is in the high 50s. "That gives us a significant financial advantage," he says. 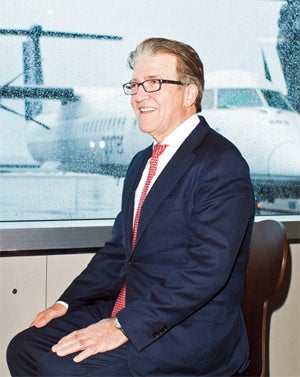 Deluce had been harboring a desire to base an airline at Billy Bishop since he learned to fly there while in high school. After graduating from Montreal's McGill University, he made a career for himself as an air-travel entrepreneur, from small-time hunting-and-fishing charters to the short-lived Canada 3000 airline. All along he believed that a properly run airline out of a secondary airport minutes away from Toronto's core could be a compelling business opportunity. "I felt Billy Bishop could attract half a million passengers a year," he says.

As the experience of air travel became more stripped-down, he saw that offering customers the kind of service and comfort they might have enjoyed before the industry started commoditizing its product in the 1990s could be a point of difference. "This is an airline that tries to present a slightly more refined product," Deluce says, noting that Tyler Brûlé, creator of acclaimed design publications Wallpaper and Monocle, is behind the airline's in-flight magazine, Re:Porter. "Passengers who are a little more discerning tend to appreciate the subtle differences."

They're not the only ones. These days the otherwise monolithic Air Canada has started matching some of Porter's amenities on the Toronto-Montreal route, and even operating a few flights out of Billy Bishop. Meanwhile, The Toronto Port Authority is building a pedestrian tunnel so passengers with time constraints won't even need to wait for the ferry. Deluce is also considering expanding his U.S. presence with flights from Boston and New York to other Canadian cities.

The trick, he believes, is to grow without losing the aspects of the airline that make it unique. "Some of the first principles that made flying successful in earlier times aren't a bad idea to emulate, in the context of the technologies and security issues of today," he says. "You know, our name is no accident. The role of a porter traditionally was to help you on your way, reduce some of the discomforts of travel, make the whole thing easier. At Porter Airlines, that's embodied in our culture."

Do You Get More Sleep Than Elon Musk, Jeff Bezos and Winston Churchill?