GitHub Is Helping Companies Work Together by Crowdsourcing Software

Even GitHub uses GitHub: Co-founder and CEO Tom Preston-Werner recently experienced in a very meta way the power of his online hosting service for software-development projects (and the largest open-source community around). Preston-Werner asked users to help him build a new type of data format; within two days, hundreds of contributions to the project had been made.

"To see a community rally around an idea, all in such a short time frame ... is pretty stunning," he says. "GitHub is able to pull people together and inspire people to contribute, because they can become part of something that's bigger than themselves."

Less kumbaya and more "anything you can do, I can do better," San Francisco-based GitHub has created a streamlined way for software developers to collaborate, by creating one arena in which they can write, share and revise code--and tap anyone in the community for help. Traditionally, the open-source coding process has been arduous, with multiple steps involved to propose changes (which can deter someone from pointing out fixes that don't affect them). "The point of GitHub is to reduce the amount of work involved, and make it so low that you will always contribute when you see something [to fix]," Preston-Werner says.

And that point is helping expand the company's user base: In April GitHub had 3.5 million users hosting some 6 million "repositories" of stored software projects. Some of those users are big players like Lockheed Martin, Twitter, Facebook and The White House; enterprise users include Fortune 500 companies, large government agencies and universities. Revenue has increased 300 percent annually since GitHub's founding in 2008, and the staff now numbers 158. Last July the company scored $100 million from Andreessen Horowitz, the VC firm's largest investment ever. (GitHub was previously entirely bootstrapped.) 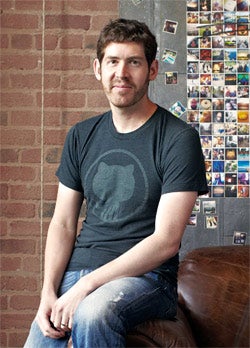 GitHub is built on Git, an open-source revision-control system that manages and stores multiple versions of a project, and improves upon the system with an online interface, access control and the ability to see users' profiles and project history. It works like this: A user "forks," or copies, a repository to their account, makes their revisions and modifications to the code, then submits a "pull request" to the original owner, who can then decide whether to merge those changes with the original code. The platform allows for real-time discussion about the changes as a whole, parts or specific lines of code. Open-source projects are free; paid plans are available for private repositories.

Examples of projects hosted on GitHub include We the People, an app The White House developed for citizens to petition the administration to take action on various issues; Bootstrap, a popular framework for building websites; and Ruby on Rails, a framework that has been used to build web apps for the likes of Twitter, Groupon, Hulu and KISSmetrics.

"We want GitHub to be the best place to design, build and ship software--but we're not there yet," Preston-Werner says. "The future is to achieve that goal, and in the name of making it easier for people to work together."

Flightfox
For planning complicated trips, a search algorithm just won't do: On Flightfox, experts compete to find the best and cheapest routes.

MapBox
With clients like Foursquare, the cloud-based platform MapBox allows anyone to design and publish a customizable map--a serious competitor to Google Maps.

Waze
Waze: A navigation system that shares real-time traffic updates, hazards and recommended routes, passively updated by drivers who have the app open on their phone.

Vyclone
The Vyclone app finds users who have filmed the same event and automatically edits their footage together into multi-angle videos.

WeddingMix
Brides and grooms can skip the videographer by getting guests to download the WeddingMix app and do the filming for them; the footage is then professionally edited by the Storymix Media team.

Directly
On the customer-service site Directly, independent experts "who know different companies inside and out" offer guidance to consumers in exchange for rewards.