A Jolly Time popcorn ad from the 1950s, when competition increased thanks to the popularity of the television.
Image credit: Jolly Time

Jolly Time Pop Corn is among the many brands shoppers find in the snack food aisle. But there's a difference between Jolly Time and the many other brands on the shelves: It's managed to continuing selling the same product, albeit in different forms, for a century.

American Pop Corn Company, the Sioux City, Iowa-based parent of the Jolly Time brand, celebrates its 100th birthday this year. Founder Cloid H. Smith was a pioneer in the U.S. popcorn industry, hand-shelling the corn himself and selling it to grocers and to popcorn wagons in small Midwestern towns.

The secret to Jolly Time's longevity has been its ability to continually evolve its brand and marketing as it keeps up with consumers' ever-changing snacking whims. Today, the company is best known for its line of microwave popcorns, including rich flavors like Blast O Butter and low-calorie options like Healthy Pop. New challenges however, continue to pop up for Jolly Time as the grocery store industry consolidates and consumers gravitate toward pre-popped bagged popcorn in fancy flavors (think sea salt caramel or white cheddar).

Fourth-generation family owners, cousins Garry (chief executive officer) and Carlton Smith (chairman), recently spoke with Entrepreneur about how the 180-employee business has overcome many hurdles in its history and how it plans to keep evolving in the future.

The 1960s: Competition heated up. Until the 1950s, the bulk of popcorn was bought in movie theaters and other venues outside the home. Television changed all that. Consumers regularly began popping corn at home, which led to the emergence of more than 100 new competitor brands. “The amount of competition was crazy,” Garry Smith says.

Jolly Time turned to innovating marketing to help it stand out. In the late 1950s, it launched a campaign offering hand-carved Black Forest clocks from Germany for $1.50 to customers who mailed in in a lid or label from a can of Jolly Time Pop Corn. Thousands of customers claimed the clock and the promotion helped differentiate Jolly Time from other popcorn brands, which were mostly relying on more traditional advertising. This was among the first so-called “on-pack” marketing campaigns that Jolly Time hosted that provided freebies to customers in exchange for them mailing in proof of purchase. The company still uses the technique, offering everything from free reusable grocery bags to magazine subscriptions to customers who mail in UPCs from boxes of Jolly Time.  Today's on-pack promotions, however, tend to align better with the company's product marketing and offering free stuff that promotes healthier living or family togetherness. “It's really hard to compete with the big boys,” Carlton says. “We just can't outspend them in traditional advertising and marketing, so we do it these other ways.”

The company also has a decades-long tradition of hosting competitions among grocers for prizes to create the most compelling displays of Jolly Time Pop Corn. It encourages its brokers who sell the popcorn to stores to get managers to build unique displays of Jolly Time in hopes they will grab customers' attention. “Popcorn is a high impulse item, so a creative display is highly effective,” Garry says. 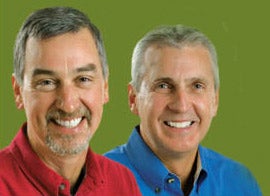 The 1990s: Research improves on a classic. Jolly Time was among the first popcorn brands to jump into microwave popcorn market in the early 1980s, and the brand experienced high growth throughout the decade. By the mid-1990s, however, sales slowed significantly. “We were sort of in a period of decline,” Garry Smith says.  “We were having trouble differentiating ourselves from the competition” among major microwave popcorn brands. Jolly Time held focus groups and discovered that consumers wanted their microwave popcorn to taste as buttery as it did at movie theaters. The Smiths developed a popcorn flavor that was for more buttery tasting than its competitors. They then hired flavor consultants in Chicago to help design a new double-buttered flavor of microwave popcorn called “Blast O Butter.” It was an “immediate success,” Garry Smith says. “It was a brand saver.” It remains one of the top-selling microwave popcorns on the market, he adds.

That endorsement, which includes placing the Weight Watchers logo on boxes of Healthy Pop, has helped the brand immensely. Healthy Pop grew to nearly 20 percent of Jolly Time's microwave popcorn sales. “It doubled our low-fat sales,” Garry Smith says. “We grew a lot during those next three years because of our low fat” popcorn sales.”

What's in store for Jolly Time's future? The Smiths acknowledge that Jolly Time faces some challenges in today's competitive snack-food market. The grocery industry is consolidating, and big-box retailers like Target and Costco are more difficult for smaller brands like Jolly Time to break into. Major retailers prefer working with large multi-product food companies like ConAgra, which sells Orville Redenbacher and Act II popcorn, and they often have their own in-house brands.

Jolly Time sells in many grocery store chains, about two-thirds of WalMart stores and no Target or Costco stores.  “We are not in Target but want to be in the worst way,” Garry Smith says.

The Smiths say they plan to continue to try and make more inroads into big-box retailers, wholesale clubs like Costco and dollar stores, as those types of stores are consuming more of the grocery market.

Another challenge for Jolly Time: Consumers have also gravitated more toward pre-popped, bagged popcorns in recent years rather than microwave popcorn.

Jolly Time has introduced various new flavors of bagged popcorn, which is contract manufactured by a Minnesota-based company--Barrel O' Fun Snacks. “We were late to the game, so we're trying to catch up,” Garry Smith says. “Even though it's a natural extension of our brand, we have to approach it carefully.”

What You Can Learn From Nintendo's Weird and Wonderful 125 Years

What Smart Entrepreneurs Know About Problem-Solving

The Future of Work

5 Ways to Future Proof Your Company