Franchise Players is Entrepreneur's interview column that puts the spotlight on franchisees. If you're a franchisee with advice and tips to share, email ktaylor@entrepreneur.com.

Like many Americans, Becky and Eric Elder of Georgia were hard-hit by the Great Recession. First, their family expanded from their own four children when the couple gained temporary guardianship of Becky’s two cousins, who had been headed to foster care. Then, Eric was laid off from his corporate management job. They needed a solution, and fast -- and found one in a Liberty Tax franchise, after hearing the company CEO, John Hewitt, speak in nearby Virginia. “As soon as we heard John speak at the Virginia Beach Liberty Tax Open House, we knew this was something we could do,” Eric says. That certainly seems true enough. In four tax seasons the Elders have opened six locations and hope soon to have 10. “We want to grow this into a family business,” Eric says. “Actually, with all these kids, we need an empire.” 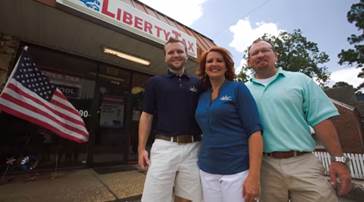 [Eric responding] We purchased our first Liberty Tax Service territory in September of 2011 and opened our first location in January of 2012.

Related: How I Bought My First Franchise With a Tax Refund

Becky and I always knew that we wanted a business of our own. However, because of limited resources, we thought this was an impossibility; we knew if we opened an independent business, we would have to start from the ground up and build everything on our own. Without brand-name recognition, we would have a hard time getting our name out there and earning the respect of our clients.

Buying into a nationally branded business takes all the pressure off things. With a franchise, a successful system is already in place. With Liberty Tax, our CEO John Hewitt has nearly 50 years of tax industry experience and has already founded and owned a successful company [Jackson Hewitt]. He, along with more than 2,000 franchisees, has created a great system. All we had to do was come in and commit to listening and trying our best to execute an already proven system.

I was unemployed when I received a sales call from Liberty Tax. Prior to that, I had worked a few corporate jobs in mid-level management. My wife, Becky, was a homeschool mom to our six children and worked part time seasonally at her parents’ insurance agency.

[Becky responding] First, we love the fact that it is seasonal. We work really hard for four months and then have a lot of spare time to spend with our family. The proven system and support also played a huge part in the decision. John has so much knowledge in this industry, as well as [access to] other franchisees who are so involved in helping you be successful.

I can call any franchisee -- and I do -- and they are always willing to help answer any question or walk me through some real-time scenarios or tell us how to address certain situations that may arise during tax season. It really is like family when you come into the system. Every other franchisee wants you to do well. All of us franchisees have the same vision as John Hewitt, which is to be the biggest and best tax-preparation company in the universe.

We spent about $65,000 initially: $40,000 for the territory fee, and the other $25,000 went for startup costs. Startup costs are things like computers, desks, signage and payroll for the first month, advertising and training in tax school.

We had never heard about Liberty Tax before we received a call from the franchise development team. At that time, the closest Liberty Tax office was 70 miles away. We were invited to a sales seminar, where we learned about the industry from our CEO, John Hewitt, as well as existing franchisees within the nearby regions.

So, we were able to ask a lot of questions and obtain adequate information at that event. We left the seminar and knew this was something that we could do. Liberty Tax also sent us home with a lot of information. We did additional research on the Internet about the franchise, paying attention to top financial, entrepreneur and business sites. We also plowed through all of the information they sent home with us, and called franchisees on the list that Liberty Tax provided.

Related: Franchise Players: From Translator to Franchisee at a Tax Franchise

There really were not a lot of unexpected challenges starting out. Liberty Tax does such a great job preparing you for every single situation that will arise. After the seminar, we committed to and purchased a territory. Then, we attended a required week-long EOT (Effective Operations Training). During that week, we trained extensively on the Liberty Tax operational system. After training, we were contacted by our area developer, who was responsible for “holding our hand” through everything else -- e.g., picking out a site for the office; making sure we held a successful tax school, which is where we get our employees; and anything else that we needed. Corporate support is also always a call or an email away.

I now tell all of my friends and family that if you want to own your own business, at least look at Liberty Tax first. "Death and taxes," right? People don’t have to buy a new car or a boat, but they do have to file their taxes. Liberty Tax is growing faster than any other tax service in the world; and, by the numbers of raw tax returns, it's growing faster than H&R Block and Jackson Hewitt, combined. Not to mention that Liberty Tax just launched the first and only national Hispanic tax franchise, Siempre Tax+.

We started with one office, and now we have six offices in just four years. We want to continue growing our business and gain market share. We now have plans to open at least one more office this upcoming tax season. The sky is the limit!