How Facebook's Social Network for Work Will Change Business

Technically speaking, Facebook at Work, a social network for the workplace, isn’t an official product yet. But that’s likely to change within “coming months,” according to the executive leading the project.

The service’s imminent arrival is certain to rekindle the debate surrounding the long-term future of email and a new wave of other services that aim to reinvent how employees communicate.

Facebook at Work is a separate version of the social network that is accessible only within the confines of a company’s internal IT systems. Personal Facebook accounts are kept separate from the more straight-laced corporate version.

The planned service is being tested by nearly 300 companies including Royal Bank of Scotland, which has 10,000 employees using the service, and with 15,000 workers at Club Med, said Julien Codorniou, the chief strategist behind the Facebook at Work project. More than 60,000 companies asked to be in on the not-so-secret beta test, according to a December 2015 report by The Wall Street Journal. 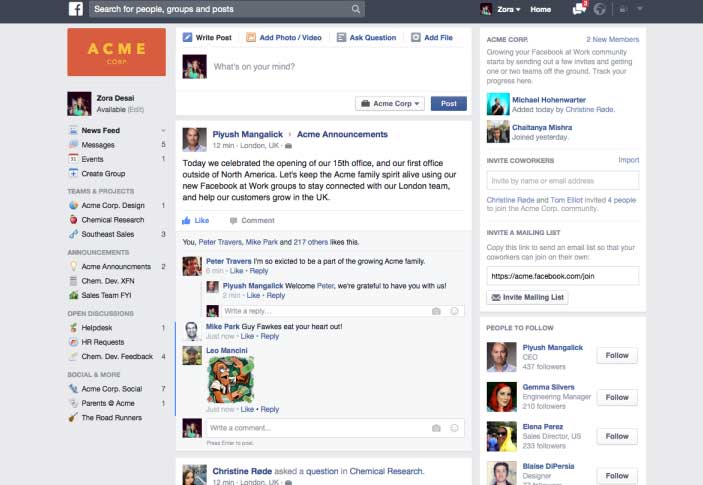 Within a matter of weeks, Facebook will expand the test to more businesses in additional countries, Codorniou said.

The idea is to apply ideas from the consumer edition of Facebook -- like sharing status updates, posting articles in newsfeeds, and group chats -- to the business world. Facebook’s “work” edition looks a lot like the consumer edition, but the focus of the information shared there will, generally speaking, focus less on personal revelations like baby photos and more on project updates, sales leads, and customer service problems.

“A more connected workplace is a more productive workplace,” Codorniou told Fortune. “We want to do that for everyone in the company -- from the CEO to the latest new employee at a retail store.”

One benefit for Club Med has been Facebook at Work’s auto-translation feature, which lets the CEO to see unfiltered employee feedback from around the world, according to Codorniou. “These are the conversations that don’t happen,” he said. “This is the good news and the bad news. This allows people who might not brag in meetings, but who have something to contribute, have their say.”

Right now, Facebook at Work is inaccessible outside a company’s main corporate domain, which means contractors and temporary workers are unable to chime in. But that will change with a few months, Codorniou said.

Exactly when Facebook at Work will become more broadly available? The company hasn’t revealed a specific date. But it is entering an increasingly crowded field of products for streamlining business communications.

One strain, personified by Facebook at Work and similar offerings from IBM, Jive Software and Lithium Technologies, sits atop corporate employee directories to recreate a “social business” network complete with news updates, group messaging, video conferencing, and other communications channels.

Other services from SAP, Microsoft and Salesforce, add communications features such as messaging or conferencing to existing business management applications.

What’s in store this year from companies likely to face scrutiny after the Facebook at Work premiere? Here’s a smattering of updates (presented alphabetically).

In early February, the company trumpeted a new contract with Europe’s largest airline, Lufthansa Group, which is moving 120,000 employees onto IBM Connections, which is another example of a workplace social network. “Previously, our collaboration capabilities often forced us to think and work in the inbox -- with one-directional communication streams and knowledge that remains in the minds, on hard drives, and in the email,” said Lufthansa IT manager Heike Griess-Nega, in a statement.

The latest version of IBM Connections allows for more focused discussions among specific team -- such as marketing, human resources, sales, and other corporate departments -- as well as additional file-sharing resources and polling capabilities.

The social business pioneer, which has close to 1,000 customers including new ones Johnson & Johnson and Starwood Hotels & Resorts, overhauled its flagship software in early February with a goal of making the technology more “consumer-like.”

Jive was founded on the premise that companies could benefit from the same social networking and media tools that the general public uses, although its mission has morphed over time. Its main products include Jive-n, which lets company employees send internal messages, share files, and comment on projects in progress; and Jive-x, which facilitates similar interactions and communications between employees, partners, and customers.

Jive is also developing a series of mobile apps that address business communications processes but that don’t necessarily require either service. One example is Circle, an interactive employee directory.

“The category is going through a major disruption, in a very positive way,” said Jive CEO Elisa Steele.

She continued: “It’s not about enterprise social networking. That had a time and a place. … This is about connections, collaboration, and engagement.”

Founded in 2001, Lithium was part of the early social business movement, but it has since evolved to focus less on helping with internal communications and more on bridging communications between a company’s customers and its service, marketing and sales teams. That was one motivation for its 2014 acquisition of Klout, a startup dedicated to identifying social web “influencers.”

“We do have a number of [companies] that use us for internal communities, but usually for solving a particular customer problem,” said Lithium CEO Rob Tarkoff. “That might be best practices around consulting, as an example, or other knowledge.”

The software giant anticipates a close link between business communications tools such as real-time messaging services, and applications such as spreadsheets and word-processing software.

Bryan Goode, senior director of Office 365 product marketing, said many teams are informal -- emerging around specific projects and then dissolving again it’s finished. Software for supporting this ad hoc collaboration must likewise be flexible. For example, groups may coalesce around a sales conference or other meeting to share commentary and information during the planning phase, at the event, and afterward. “We see this world between enterprise social and collaboration merging,” Goode said.

With that in mind, Microsoft last month started automatically including its Yammer messaging applications as part of most Office 365 business accounts. Goode said the software is already used by a half-million organizations, including 85% percent of Fortune 500 companies.

SAP introduced a big update to Jam focused on corporate training in January. One big customer is Bertlesmann, which is rolling out the software to 100,000 employees. The company is using Jam to “foster social learning and internal collaboration” so that it can hold fewer individual training events that have a limited scope -- both in terms of scheduling and attendees. Overall, more than 21 million subscribers use various editions of the Jam software, Patel said.

Salesforce’s Chatter technology runs more than 6,000 online social networks that link businesses with their partners, employees, and customers. Chatter is meant to be used in collaboration with all of Salesforce’s apps.

“Most of its use is right within the context of business,” said Nasi Jazayeri, executive vice president and general manager of the Salesforce division that oversees Chatter. “Someone is discussing an account, a lead, an opportunity.”

As an example, Home Depot started by using Chatter to organize employee training and orientation. New workers post questions, and veterans contribute the answers. Over time, however, the platform has been expanded to encourage collaboration between Home Depot personnel, retail customers and experts from some of Home Depot’s suppliers, such as GE.

What Is the Best Way to Run a Highly Effective Hybrid Meeting?

Democratized News is the Future of Keeping Up With the Times