Hiral Sanghavi had launched three small startups in his native India before moving to the U.S. 30 months ago. Now, crowdfunding has put the 30-year-old entrepreneur on a fast track to the American Dream.

Sanghavi and his wife, Yoganshi Shah, raised $11.5 million across a couple of ultra-successful crowdfunding campaigns -- $9.2 million on Kickstarter and another $2.3 on Indiegogo -- so that they could manufacture a jacket optimized for travel.

“It’s just 30 months I am living in the U.S. and I am already living my American Dream," Sanghavi says during a conversation with Entrepreneur. "It’s exciting. … I am happy to be here!”

Sanghavi and Shah designed and manufactured a travel jacket with more than a dozen features, including a built-in travel pillow, a koozie drink pocket and an iPad pocket, and they began distributing it through their Seattle-based apparel company BauBax.

“Everything has gone so fast and happened so fast for us," says Sanghavi, who launched BauBax with his wife a year and a half ago. "I haven’t got the chance to take a holiday after the last campaign’s success, go on a vacation and relax, sip a beer and realize what’s happened to me in the last year. I am constantly working, just running, and because I am passionate about what I am doing, I like it that way. I like to be busy.” 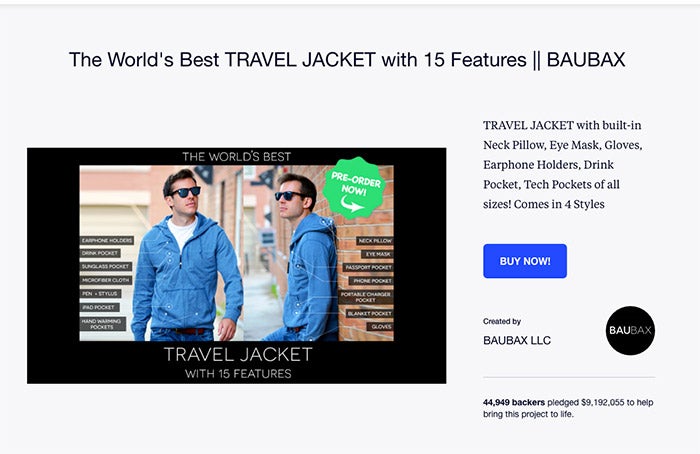 That’s the magic of crowdfunding -- you can turn hustle into cash. You can go from zero to 60 almost immediately.

Or, in the case of Sanghavi and Shah, from zero customers to 45,000 in 120 countries buying 65,000 jackets in two months. Today, they launched another crowdfunding campaign for a new line of wearable technology apparel.

Even before the ultra popular travel jacket was manufactured and fully shipped, the couple were working on their next product idea. When Sanghavi and Shah were traveling in China researching and visiting manufacturing facilities for the travel jacket, they were depending heavily on the GPS in their smartphones. It was drawing down their batteries pretty quickly. Carrying around a bulky external battery prompted Shah to wish she had a way to charge her smartphone in her jacket.

The new line of BauBax wirelessly charging wearable gear is the answer to their annoyance. 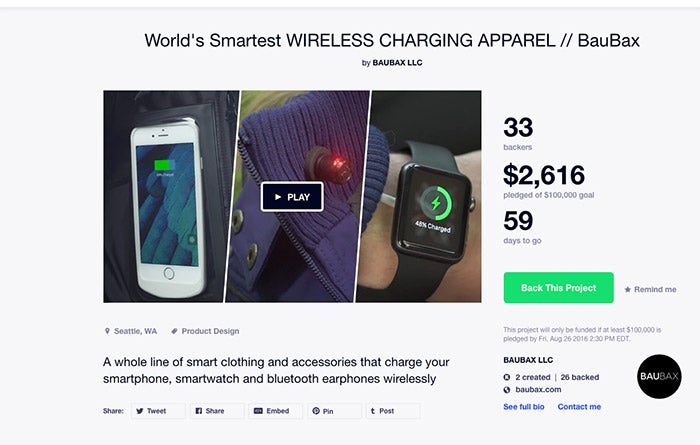 To grow BauBax, Sanghavi left business school at the esteemed Kellogg School of Management at Northwestern University. Sanghavi had planned to attend Kellogg and then work at a large corporation to become familiar with the canals of corporate hierarchy.

Even though Sanghavi took a break from school, his professors at Kellogg are encouraging him. “They are very proud of me," he says. "I have become the entrepreneurial posterboard of the school.”

He also turned down summer internship offers at Apple, Groupon and Cisco. Passing up an MBA internship at Apple is no small decision, to be sure. He’s had a few confused comments from friends: “You turned down Apple and you launched a wearable technology startup?”

But those comments can't dampen Sanghavi's excitement. He says his American Dream is just getting started.

“It’s been a great, great ride since last summer,” Sanghavi says. But “I am still at the beginning of the journey.”