Actresses Patti LuPone and Christine Ebersole share what the first female celebrity entrepreneurs can teach us today.
Next Article

In the early 1900s, Helena Rubinstein and Elizabeth Arden were considered two of the first female celebrity entrepreneurs in America. They built competing cosmetic empires at a time when women were rarely welcome in the workplace. Now they're subjects of the new Broadway musical War Paint -- and the Tony Award-winning actors who portray them, Patti LuPone and Christine Ebersole, say their lessons are just as relevant today.

Arden and Rubinstein became business titans at a time when women weren’t expected to have ambitions. What drove them to create these empires?

Christine Ebersole: The social class they were each born into was a driving force. They weren’t born to the manner, so I think they wanted something better. They weren’t going to settle.

Patti LuPone: In Helena’s case, she was born independent. She actually rejected her father’s choice [of husband] for her, and he banished her from the house. She asserted her will quite early. I don’t think she ever thought, I’m not supposed to do this. She just did it. Her business was part survival, part creativity. She wasn’t not going to be allowed to do what she wanted to do because she was a woman. She was single-minded in her success. What they both achieved at that time, that period in history, was extraordinary.

How do their stories and struggles relate to those of women in today’s working world, even after so many glass ceilings have been smashed?

LuPone: It’s the same story! You know what I mean? Oh my God, I start to cry in the song that says, “A woman scales the wall, climbs high above them all and oh, what gates of hell they put her through.” It’s hard to know exactly what obstacles or what rules and regulations they faced in the business world. But Helena was incredibly smart, knew her niche and had her eyes open to it. She sold her business to Lehman Brothers, made a fortune; they ran it into the ground, and she bought it back and made a profit again!

Ebersole: It’s a very difficult equation for women. Because it’s kind of been reversed, in a way, in that motherhood is not something that is really exalted [today]. I think we mistakenly equate equality with becoming like men [laughs]. It instills a competition between work and home. We’re told we’re supposed to be in the workforce, and to be anything we want to be and invent ourselves and be entrepreneurs and start our own businesses. But that can mean that the other parts of your life languish. 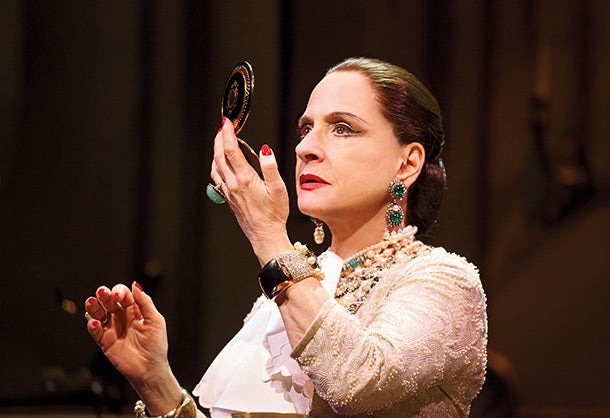 Both Arden and Rubinstein sacrificed a lot for their careers, which is something many people with drive can identify with. Do you?

Ebersole: As a woman and a mother and a wife, and somebody who is entering her fifth decade in show business, it’s the question of, "Can you have it all?" And I personally find that to be a fallacy. Because something gets sacrificed. Elizabeth, what she sacrificed was family and children. I have three children, and they are now all in college, but there were a lot of things I missed out on, a lot of moments, because I was busy being onstage and in movies and on television. I can’t regret any of that, but I’m able to, now, awaken those parts of me that I had to put aside because I was so busy chasing the prize.

The women became celebrity entrepreneurs and served as the faces of the very businesses they created. They obsessively curated their public personas -- something that today we’d call their personal brand. Has that idea impacted the decisions you’ve made in your career?

Ebersole: My father always said to do what’s in front of you. Don’t take just anything, of course, but make a decision based on the opportunities that exist. You can have dreams about what you’d like to be doing, but you can’t sit around waiting for them to come to you, because it’s not going to happen. I always thought of my career in terms of “You’re only as good as your last five minutes.” Work begets work. You can’t really rest on your laurels, and you’re always having to reinvent yourself.

Are you still reinventing, after a career that spans four decades?

Ebersole: It’s about drive. I’m so grateful to have this job and this opportunity -- and it’s been 11 years since I’ve done a Broadway musical -- but as an actor and an artist, I have found that doing cabaret shows is how I can nourish myself. They’re self-starting projects -- something inspires me, I write about it and I perform it. I just finished my seventh project like this, and they’re a totally different experience [from performing someone else’s work]. And again, when you’re working, it increases your opportunity of getting work.

It’s interesting that, in contrast, Arden and Rubinstein seemed to hold firm on one vision. They always cultivated a high-end, luxurious exclusivity with their brands -- but then makeup became a drugstore commodity when middle-class women went to work during World War II.

LuPone: That was their tragic flaw. They could not adapt. In their minds, that was betraying their clientele. They both aspired to the upper class. And if they advertised on television, they’d be seen as courting the masses -- and that would mean they were no longer exclusive. That is what basically wrecked them. They were not savvy as far as progress is concerned. They were savvy in every other respect, but they just didn’t move with the times. Intentionally. They thought it was beneath them. Both of them.

They were such fierce rivals. Do you think they had respect for each other, even if it came with some contempt? I imagine that tension resonates with a lot of entrepreneurs, who must watch their competitors constantly.

LuPone: Certainly not on the outside! No one is alive that knew both of them or was on intimate terms with both of them, so we’ll never know. But I’m not a big fan of competition because I think it brings out the worst in us, not the best. Competition can be unhealthy. Support is so much better than competition.

But that competition drove their innovation.

Ebersole: It did, definitely.

LuPone: The way in which they rivaled each other was so interesting. One came out with a product, the other one-upped it with something -- the same product but with a different, better formula. The thing about those two is, even though they come from very different backgrounds, their ideology was exactly the same. And had they put aside insecurity -- what else could it be? -- they would have created an even larger empire because they were so similar.

War Paint opened at Chicago’s Goodman Theatre last summer and broke box-office records. Decades into your careers, how do you feel before the launch of a new project? And when it’s well-received, does that thrill ever get old?

LuPone: I always feel anxious before a project hits audiences. And I will be thrilled if this one is successful [on Broadway]. I will be really, really happy, especially for the creative staff, because they’re the best bunch of guys I think I’ve ever worked with. They’re so generous, collaborative, loving and supportive. And that isn’t always the case in musical theater. It’s usually an extremely dictatorial atmosphere.

Ebersole: Stage is really the actor’s medium. I don’t think you feel the energy in the same way doing a TV show or a film because it’s kind of once removed, and it’s not so much up to you. But stage is where we have the most control. It never gets old.

There are so many themes that relate to today’s world, from women’s rights to the fact that these entrepreneurs were both immigrants. What do you want audiences to take away from the show?

Ebersole: It’s just kind of what America is about, the land of opportunity and entrepreneurship. You don’t have to be from a certain station in order to make it -- that’s the ideal behind it. This really speaks to that, and I hope it gives people hope. And inspiration.

A history of makeup mavens

In the early 1900s, cosmetics were used only by actresses and prostitutes. But two immigrants -- Helena Rubinstein of Krakow, Poland, and Florence Nightingale Graham of Ontario, Canada -- saw the same opportunity and seized it. Graham opened a beauty salon in New York in 1910 and called it Elizabeth Arden. (She adopted the name for herself as well.) Rubinstein opened a salon in the U.S. five years later. Both created skincare and makeup and sold the promise of transformation -- a staple of advertising today, but a new concept then. “There are no ugly women, only lazy ones,” Rubinstein would say.

Both became famous by putting themselves in their advertisements. Rubinstein would pose in a lab coat, conveying the promise of science to save your skin.

Graham-turned-Arden marketed her way to the top of high society. Their competing salons eventually made them two of the richest women in the world. And fittingly, their creations remain competitors today -- though in very different form. Rubinstein sold hers to Lehman Brothers in 1928 for $7.3 million (that’s more than $100 million in today’s dollars), bought it back for $1.5 million after the Depression, and rebuilt it into a behemoth. It was passed on to her family foundation after her death in 1965 and sold to L’Oréal in 1988. After Graham died in 1966, her company was tied up in years of litigation and new owners, and was bought by a L’Oréal competitor -- Revlon -- in 2016.