A new survey pit the Facebook CEO against the president in a 2020 contest, and the results showed a tight theoretical race.

The Tuesday poll from the Democratic firm Public Policy Polling found Zuckerberg, pegged in the survey as the Democratic presidential nominee, in a dead heat against Trump at 40 percent support each. The remaining 20 percent of respondents were unsure.

Zuckerberg won the support of 69 percent of voters who said they cast a ballot for Democrat Hillary Clinton in the 2016 election and 9 percent of those who said they voted for Trump. On the flip side, Trump received the backing of 85 percent of Trump voters and 5 percent of Clinton voters in the matchup.

Zuckerberg's favorability rating was found to be below water. Twenty-four percent of respondents held favorable views of Zuckerberg, while 29 percent viewed the Facebook billionaire unfavorably. Another 47 percent were unsure of their feelings toward Zuckerberg. 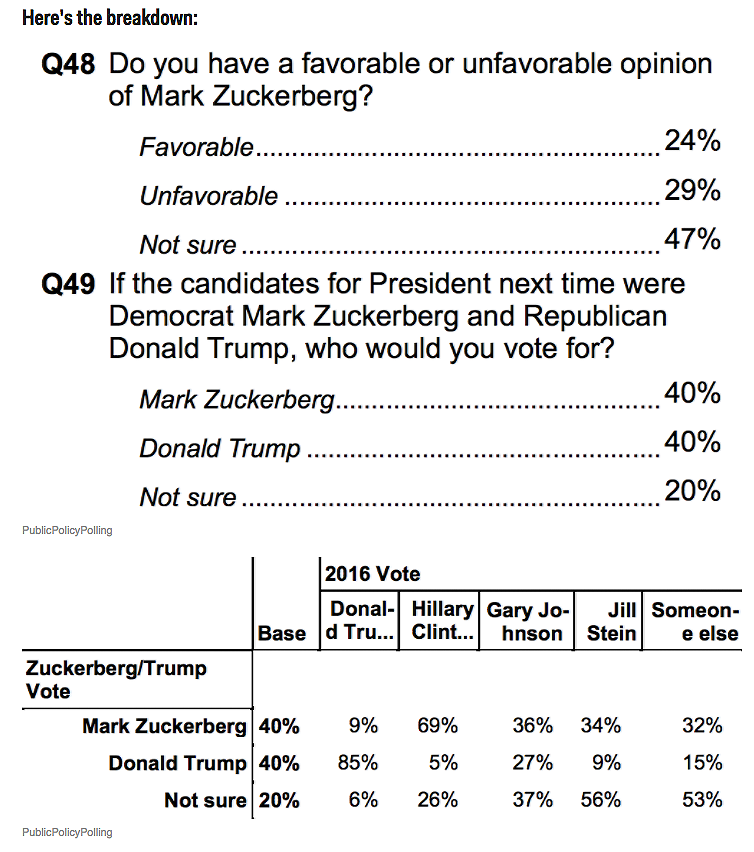 Zuckerberg, who is traveling across the U.S. on a tour that has led many to believe he may be seeking a future in politics, has insisted that he is not taking a look at the presidency. He has said his nationwide tour is instead about getting "a broader perspective" on the country.

The Tuesday PPP poll surveyed 836 registered voters from Friday to Monday. The margin of error was 3.4 percentage points.