Is a Breakdown in the Charts for Valley National Bancorp?

Valley National Bancorp (VLY) was trending higher since the fall, but has recently been trading in a sideways range, where the stock formed a key leve...

By Christian Tharp
July 1, 2021
This story originally appeared on StockNews

Valley National Bancorp (VLY) was trending higher since the fall, but has recently been trading in a sideways range, where the stock formed a key level of support. If the stock falls through this level, a breakdown could occur. Read more to learn how to take advantage of this trade.

Valley National Bancorp (VLY) is a bank holding company whose principal wholly-owned subsidiary is Valley National Bank. It is engaged in providing a full range of commercial, retail and trust and investment services largely through its offices and ATM network throughout northern and central New Jersey, New York City, Florida, and Alabama.

VLY had a strong quarter. Auto loans increased in its consumer portfolio. The company also originated over $1.6 billion of non-PPP loans, which was the single highest quarter for loan originations in its history. Plus, its commercial loan pipeline stands above $3 billion, the highest level in its history.

The company has a debt-to-equity ratio of 0.8, which is a positive. The firm is also quite profitable with a net profit margin of 31.8%. Earnings have grown an average of 23.5% a year over the past three years. Analysts expect earnings to rise 30.4% in the second quarter.

The stock appears undervalued with a trailing P/E of 13.31 and a forward P/E of 11.19. The stock has also shown mixed performance since March as shown in the chart below.

Take a look at the 1-year chart of VLY below with added notations: 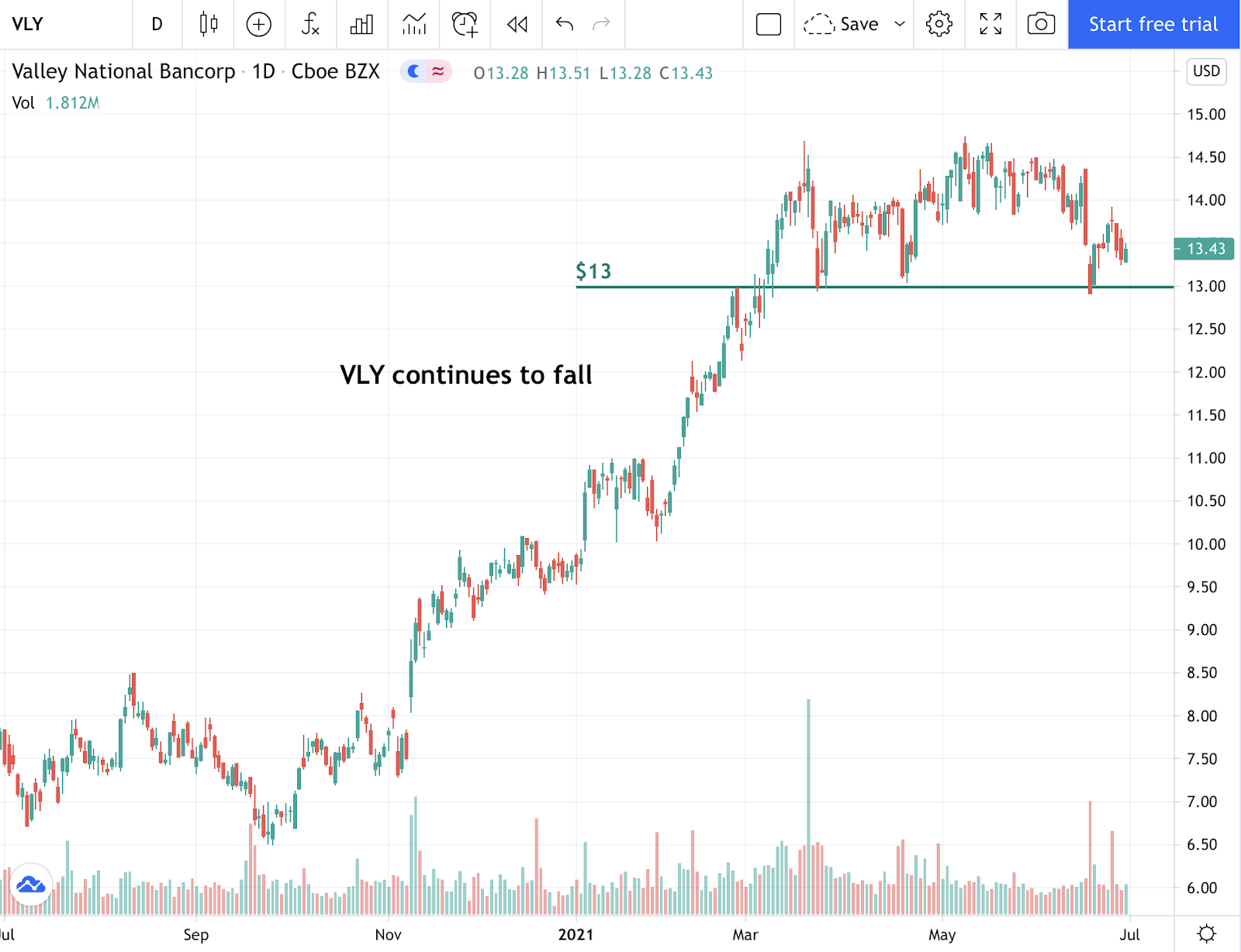 Chart of VLY provided by TradingView

VLY had been trending steadily higher since the fall of last year before recently moving into a sideways trend, and that trend has caused the stock to form a key $13 support (green). VLY looks like it may be falling to that support level once again.

A break of $13 could mean much lower prices for the stock. Therefore, a trader could enter a short position if it breaks below the support level.

VLY shares were unchanged in premarket trading Thursday. Year-to-date, VLY has gained 39.95%, versus a 15.41% rise in the benchmark S&P 500 index during the same period.

The post Is a Breakdown in the Charts for Valley National Bancorp? appeared first on StockNews.com